There are few albums beneath the banner of 'electronic music' that have amassed and established longevity in respect of playback. The nature of the genre doesn't lend itself to the notion. Albums come and go, records released, played and forgotten. It's somewhat sad. However, at the same time it also emphasises the importance and significance of an album which has managed to stand the test of time.

In this case I'm making reference to Move D & Benjamin Brunn's "Let's Call It A Day". Earlier this year it was announced that the album was due for a re-release via Smallville. It's the first time that the record would be available on vinyl following the initial release back in 2006. Ever since it has become a firm favourite in the hearts of collectors, enthusiasts and fans. This is in part due to the diversity and consistency across the release, a beautiful assortment of minimal soundscapes, soft alluring melodies, deep textures and electronic elements which transcends any one particular style, taste or genre.

Recorded many years ago the album remains pivotal and as relevant as ever, much do the musicians behind the release. David Moufang & Benjamin Brunn are still prominent figures within the wider realm of electronic music, two gatekeepers who have released an endless array of material across decades. Looking back, they reflect on a different time and the collaborative process which lead to the release of the album as David discusses:

"I can't remember what inspired the decision for us to start working on music together but I know that it wasn't with some big ambitious goal of producing an album. It was more like 'let's jam'. This was back in 2006. Both of our albums stemmed from these jams which took place around the same period, they're sort of a pair."

The sporadic nature of the collaboration is perhaps what lends itself to the singularity of the music featured across both albums. The music itself wanders between miscellaneous ideas and constructs, playfully meandering in a way which is unique and transient. Long, drawn out heads down tracks are paired with that of flickering melodies, wild intrusions and percussive flourishes. Benjamin provides justification for the finished product.

"As I remember, we never deeply spoke about our music. I think we both knew what the other one liked and didn't. In other words, we hardly held divided opinions. I was the more unexperienced between us. David is not much of a talker either. Looking at the four days in partciular in which we recorded what became Songs from the Beehive and Let’s Call it a Day, imagine us two doing what we do without much of a word. There was a similarity and no divided opinions, at least to my understanding and memory. No textbook process or procedure but coincidence, time, our ages, our private issues at the time, air temperature, moonlight, the constellations in the stars etc.." 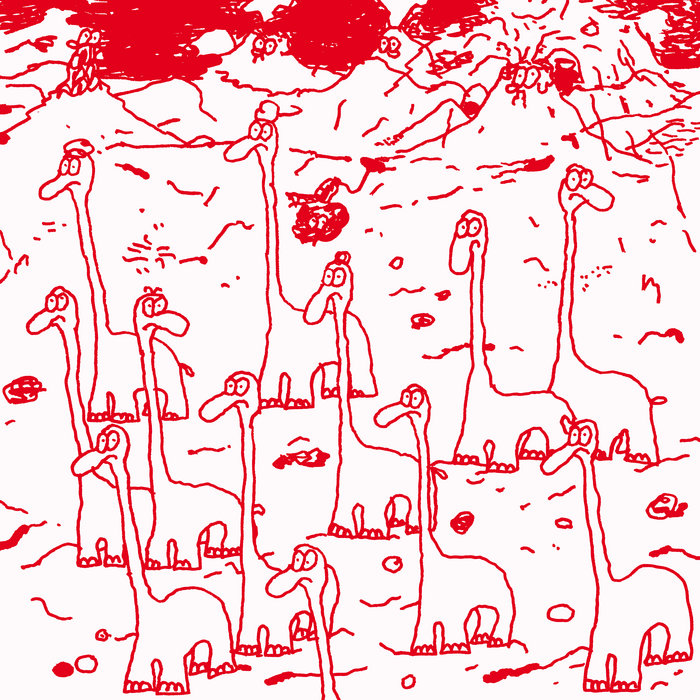 Whilst Benjamin insists that the pair didn't discuss their influences or the result of their collaboration in much detail prior to hitting the studio there was a conscious awareness and a mutual understanding of one another's respective backgrounds. The German electronic music scene and the diy movement which evolved in the 90's enlightened both musicians, as Benjamin recalls.

"Everything that happened at VOXXX in Chemnitz between 1996 and 2005 influenced me. Frank Bretschneider and Rastermusic in general, especially in 1996 and 1997. I went there almost every weekend and was amazed by the effect of continuousely mixed House and Techno music all night long. Another incredibly influential night was a party called Raster-Kompakt, which featured a mixture of Raster Noton and Kompakt artists. Then there was a concert by Transient Waves, which was another inconceivable night for me.

VOXXX was in a former brewery building with concrete walls and floors, high ceilings and a large pipe protruding and blowing very warm air into the room. I often stood near that pipe enjoying the warmth, the large space, the high room, the sound. I am sure that the mix of music and the climate in there did something to me."

David recalls similar experiences and moments from around such periods, whilst observing differences between the past and present in a creative sense. It's interesting to observe the fact that Benjamin is drawn to the longevity of the parties and the overarching playback of the music featured as opposed to the individuality of a particular track or moment. This in itself is perhaps an ideology paired with that of the music created by both musicians when working in unison, as David goes on to explain.

"I think these days it is harder to make music as there is more and more great music coming out. When we started in the 90's there was a void as the techno scene was still relatively new. During that period there were hit singles and records but only a handful of albums from the likes of The Orb, KLF, Carl Craig etc. Style wise there was still very much a blank canvas which could be filled in. We were definitely a part of that kind of 90's sound, which I think is due a revival. For a while it was considered dated and lame but now it's come back around and sounds fresh again. People have given it a new spin, a new approach.

I think a lot of the so called 'IDM' in the 90's has probably got a lot of potential with the new generation. There's still some charm to those records which act as the blueprint for a certain style, an old Black Dog record or an old Luke Vibert record radiates something special. There's a sound quality to this kind of vintage music, you could say the same about house music in comparison to the sound of today. For me, those older releases hold much more character to them, even if it's in their defects. From the bad pressings to recycled vinyl, it's all part of the package and I somehow feel that the vintage stuff still holds a certain kind of aura in which you can get sucked into."

When talking with both David and Benjamin, it's hard to imagine that they might have ever pictured themselves where they are at present. Many years on, here they are discussing the importance of their respective musical trajectories and an album which remains crucial to many. It's all very positive on the most part. However, do they find themselves ecnouraged or lost within what is a very different musical community from that of where they both began? Are they left wanting for something more? Is electronic music still enough?

"I am not so much jaded with electronic music in general but with beat focussed music. A beat has a function and is therefore relevant for certain occasions. However, I don't go out dancing and so I don't need beats. I like non-functional music or music that wasn't intentionally made 'for something'. I am jaded with house music and the particluar tempo range, patterns and sound pallettes. I still dive into interesting ambient music with sounds of an origin that I can't picture."

David has his own view, an opinion not too dissimilar..

"I think if I were starting out today it would be harder to find the motivation. I have a feeling that there's at least as many producers as there are music consumers, if not more. For anyone who's now interested in music, the steps that you have to take to start producing and being creative are marginal. There are a lot of experts, a lot of variety and a much smaller scene in some senses. I'm not sure that I'd feel such a strong call to enter the game if I were new to it.

Honestly, I haven't listened to electronic music for a long time. I listen to the music which I find inspiring and challenging to myself as an individual so as I can grow as a musician. It can be jazz, funk, classical music etc. Anything that I expose myself to, I will hear it in the music that I then create. I'd much rather find those references in 70's electronic jazz or 80's hip hop than in contemporary electronic music. When I listen to music I am looking for a break."

It's remarkable listening to the respective opinions of two musicians who have left such a marked imprint on electronic music across a prolonged period. They've each found success in their own inimitable ways but are drawn together and paired through a common ideology which aligns far beyond the studio and in their own very individual approach to creativity. Music is many things to many people, this much is true. Electronic music is no exception to this rule, here we've heard the stories and perspectives of two producers who are embedded in the very core of the genre's mentality and soundtrack. Yet, they watch and partake from a distance. It's not time to call it a day just yet but their guidance offers food for thought and a chance to realign our own relationship with an ever changing sound.