Spotlight on the North: Helsinki in Focus
Minute Read

Spotlight on the North: Helsinki in Focus Stashed away in the north-eastern corner of the Baltic Sea, Finland and its people have long been defined as reserved and understated. Bertolt Brecht once disparagingly described Finns, whose official languages are both Finnish and Swedish, as ‘silent in two languages’. But in recent years Finland has overcome its sombre preconceptions and become an object of curiosity for travellers across the world. Perhaps this is the best way to precisely describe Helsinki’s contemporary underground electronic music scene: quietly compelling, understated and curious.

After speaking with a number of the key protagonists within the city, one repeatedly lamentable characteristic of Helsinki’s underground music scene seems to be a lack of unity. Whilst there is no shortage of talent brewing in the liminal areas of mainstream culture, the absence of cohesion and collaboration denies these groups the major cultural significance that they could possibly have. However, quietly brewing under the hubbub of this Baltic city, there are beacons of hope and unity that have been growing over the last few years.

Established in 2013 by Tim Uskali and Toni Rantanen, Kaiku has been a vanguard for the scene in Helsinki. With a beautifully curated programme, a revered Danley sound system and chic, minimal interior design, the club has consistently turned the heads of music lovers from all over Finland and beyond. Kaiku’s owners, Uskali and Rantanen, have done ground-breaking things for club culture in Helsinki, running clubs like Soda, Kerma and Rose Garden. Marju Rotinen, who is in charge of Kaiku’s bookings and promotion together with Lil' Tony, comments:

“Kaiku is sort of a continuation of all of that. For me, Kaiku also represents an era in the history of underground electronic music in Helsinki. It has raised a generation of DJs and partygoers and it has been a hub for people to come and enjoy the music they love just as they are. It is made by the love of the staff, the DJs and its guests.” For many in Helsinki, Kaiku is the bedrock of contemporary electronic music culture. In fact, the establishment has garnered reverence worldwide, earning the adulation of countless DJs and partygoers including Young Marco, who, in a Guardian interview several years ago, claimed: "If I designed a club it would look like this one… A big wooden box, a great sound system, a rotary mixer in the booth and working turntables (which is not a given these days, unfortunately). Combine that with a very open-minded crowd and great programming and you have Kaiku."

Unfortunately, Helsinki’s official tone of voice is very mainstream and, as a result, there isn’t a great deal of effort in nurturing grassroots cultural movements within the city. However, council investment into nightlife and clubbing could be mutually beneficial, as was the case for Sompasauna, a civic-run public sauna built in an open harbour, which was set to be demolished by city officials but, given its increasing popularity with tourists, it was rebuilt and used as a marketing ploy for the city’s tourism industry. As is the case for many cities, Helsinki’s authorities see underground parties as a disruption to the status quo, instead of something that enriches the city’s culture and makes it more appealing to the rest of the world.

Although, this does not mean that the people of Helsinki lack creativity or imagination when it comes to DIY and grassroots events:

"The DIY parties can be very ambitious, imaginative and weird at their best. I’ve been to a party where there was a sauna next to the dancefloor, for example. People danced with towels and bathrobes on. Also, forest raves are a thing and go hand in hand with suomisaundi (a style of psychedelic trance which developed in the mid-90s). We have a long winter, and restricted supply for suitable venues for DIY parties, so people get creative with finding secluded places with some protection from the weather: barracks from 18th century, railway tunnels, bunkers and caves to name a few." (MYÖS Crew)

MYÖS Collective – Paving the Way for Diversity and Inclusion

One particular collective is making a concerted effort to counteract the homogeneity and inaccessibility of the scene in Helsinki. MYÖS, which is Finnish for “also” or “in addition to”, is a project that was conceived towards the end of 2017 by a group of young up-and-coming female DJs who sought to create safer, more inclusive spaces that celebrated the diversity which characterises modern cities.

"We felt a need to create spaces that are more accepting, softer, safer, inclusive and welcoming for ourselves, our peers and other people coming from various intersections beyond the norm, which was (and partly still is) very much techno/house oriented, white, straight & cis-male."  (Kiia – MYÖS collective)

The people behind MYÖS– a group comprised of around 20 active members and volunteers- are striving to make their organisation as accessible and inclusive as possible. For example, the entry fee to their events is donation-based and harassment or discrimination of any kind is strictly not tolerated. Beyond this, MYÖS has arranged free DJ workshops and given up and coming artists the opportunity to perform at their events.  Recently, the protagonists behind this collective have been labelled as ‘party activists’ in an interview with local Finnish publication, Image. Crucial to MYÖS’s ethos is recognising that the origins of clubbing culture, such as the idea of safer spaces for the LGBTQI+ & POC communities, have been forgotten in the commercialisation of the industry. In the inchoate stages of these movements, clubs served as a vital point of social refuge for society’s harassed and discriminated groups. In this way, the MYÖS collective seeks to bring the positive aspects of history and politics back into partying.

It is impossible to overlook the cultural and social significance of the MYÖS collective; their efforts in representing the under-represented, inspiring and illuminating local talent, and paving the way towards greater diversity and inclusion embody everything that this city’s underground wants and needs in the near future.

"From my point of view, MYÖS has been something that you cannot just ignore if you’re interested in the electronic music scene. What I mean is that it plays its own (very important and hopefully inspiring) role of diversifying local club culture and representing lots of underrepresented, talented people from Helsinki and further afield. Lots of DJs who basically started playing at MYÖS parties are now being booked for commercial club nights." (Masha – MYÖS)

Another group committed to cultivating a greater sense of community amongst the underground scene in Helsinki is the label Free Shelter. Although this project only officially began in the summer of 2019, Free Shelter has been brewing for a couple of years since two of the founders, Miro-Benjamin and Aaro, met and bonded over a mutual fascination and curiosity with music. Shortly thereafter, Aake and Markus joined and helped give rise to the concept of Free Shelter. Originally inspired by the fun, liberal philosophy of Young Marco’s labels, the guys behind Free Shelter are eager to establish a space for exotic, obscure sounds in a happy-go-lucky environment.

"Our mutual goal is to not concentrate on a certain genre, but rather to find something particularly interesting in the music we listen to. To establish a place for under-represented sounds." (Markus – Free Shelter) 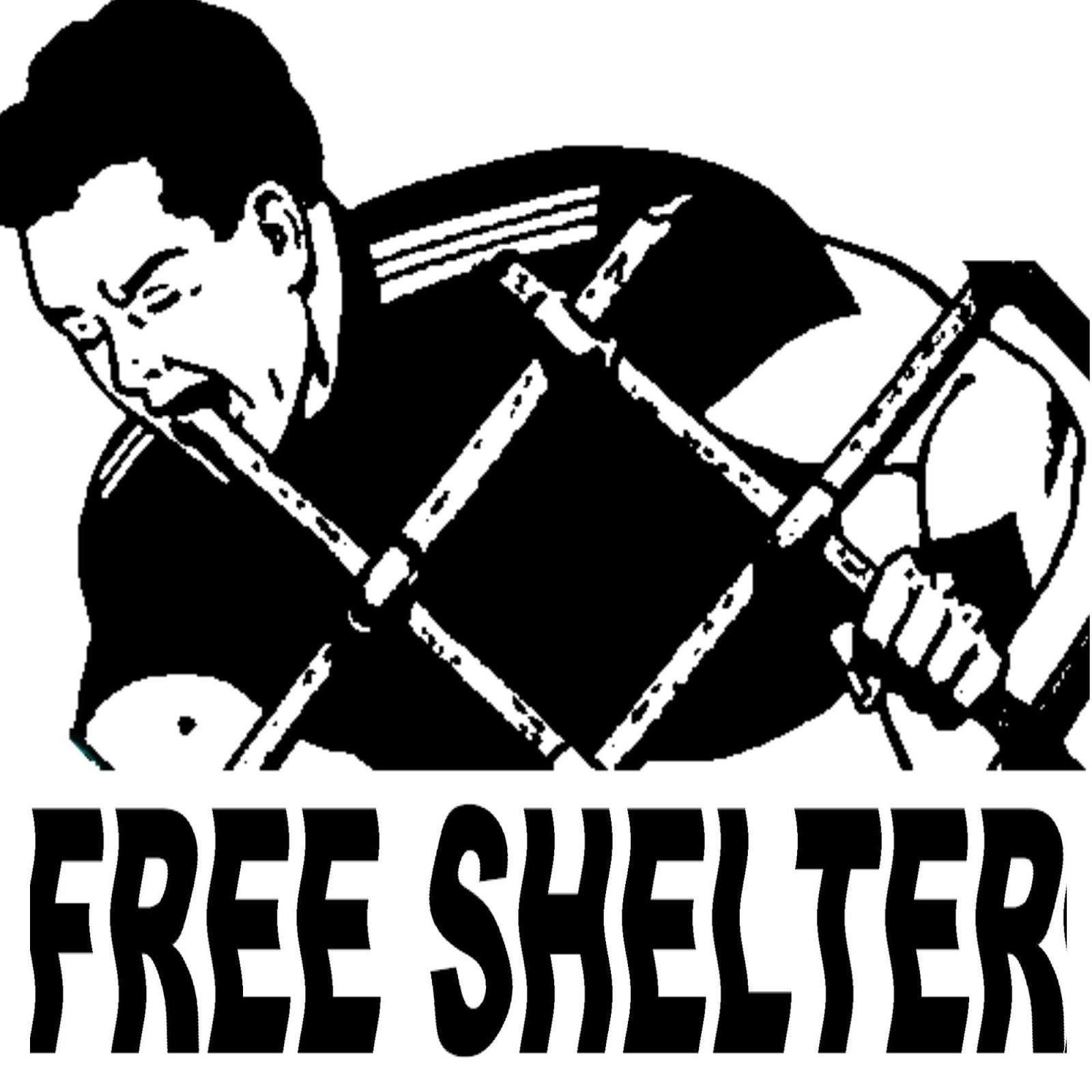 This seems to be one of Free Shelter’s most respectable goals; celebrating the obscure, liminal sounds that are deemed unsuitable for bigger, more commercial clubs. What is also inspiring is the group’s clearly discernible passion for music, epitomised by an impassioned anecdote from Aaro, in which he recalls a specific moment in a set from Flow Festival.

The guys behind Free Shelter come from a diffuse selection of musical backgrounds, drawing on a rich catalogue of influences from ambient to heavy metal and everything in between. But what is particularly interesting about this project is the fact that these guys have united in spite of their musical difference. In this way, Free Shelter serves as a refreshing paragon of unity within an underground scene that is hamstrung by dissonance. Instead of becoming bogged down in the petty tribalism that has come to define modern society- not only in music but in politics and beyond- this group is bound by a genuine love of music as a whole. As such, Free Shelter represents a promising leap towards the celebration of more obscure, under-represented sounds, whilst simultaneously harking back to the origins of club culture with a fun and liberal attitude.

So, what can be gleaned from all this? Whether it was the European Romanticism of the 18th century or the globalised hippie movement that commandeered the sixties, counterculture has an indispensable role in opposing mainstream culture. More precisely, it has the potential to incite dramatic, necessary change when society is perturbed by uncertainty and division. Whilst the early French Romantics opposed the bourgeoisie and the tenets of modern rationalism, today rave culture challenges the insidious rhetoric behind national pride, immigration and economic insecurity. Our modern counterculture champions the under-represented and offers glimpses of unity which act against the division that plagues modern cultural exchange. And in this regard, Helsinki is no exception. By scratching beneath the surface of these communities, it is interesting to see how, even in spite of their differing perspectives, they contribute to the creation of diversity in Finnish counterculture as a whole.