A Dictionary of Devotion: Peder Mannerfelt In Conversation
Minute Read

A Dictionary of Devotion: Peder Mannerfelt In Conversation A sequence of actions regularly followed.

Humans are creatures of habit. It’s within our nature to stick to what we know, to favour the beaten track. Routines are the very cornerstone of regularity, providing structure for folk to follow as the sun journeys from East to West. We tend to follow habit, even if it’s a subconscious act. Though routines are repetitive, they depend entirely upon a whole host of actors and occurrences. Rarely are routines the same from day-to-day: your train might be late (*cough* South Western Trains *cough*), or Pret might have sold out of your favourite sandwich.

Additionally, setting plays a role in how you plan your next steps. Wading through stacks of records and preparing for a set tends to take a different shape than readying your kids for the school run. This juxtaposition – the “intersection between rave and domestic life” – is exactly where Peder Mannerfelt found inspiration for his latest album, Daily Routine. Stark differences between home life and road life are obvious on the album. For example, ‘Weighing My Brain’s’ textural ambiance contrasts quite dramatically with the rampant percussion of ‘This Machine Shares Memes’, demonstrating technical and stylistic differences representative of the two dimensions of the Swedish artist’s life.

“The general theme has been growing for a long time. When I’ve done albums in the past, they’ve had quite focused themes to them, and ideas before I started making them. This one, I was a bit stressed out that I didn’t really have a plan of what to do. To bring it all together, I realised all these feelings I’ve been having over the past couple of years, and having that daily life.”

Both work and family life have served as inspiration for the enigmatic Swedish artist, and have influenced each other since children came into the equation. Hedonistic clubs differ dramatically to savoury homes, but that’s the point. In separating the two, Mannerfelt’s sonics tell the story of both stimuli.

“Either can be rewarding or repetitive. It can be really repetitive being away as well and travelling. Coming home to the family can be rewarding. But again, that interplay of things that are quite opposite extremes. I quite enjoy being away, blasting techno until 7 in the morning, and then doing a school run on the Monday morning. It grounds you in both worlds.”

Blasting techno is obviously hectic. So too is getting your kids to school on time, packing lunchboxes and sorting out playdates and activities. Although prescriptive planning is necessary, both require spontaneity and on-the-spot reaction. This ‘acting in the moment’ is clear in Mannerfelt’s work, reflected in the less manicured, rougher composition of each track.

“It’s the kind of interplay of those two states that are quite opposite to each other in a way, kind of up and down. I tried to do it, I wouldn’t say in a rough way, but not polish the edges too much. Not making every transition perfect between stuff, which I would otherwise. That off and on is on a similar level the polar opposites of stuff. That’s my daily routine of being away on the weekends and playing, and then having a fairly normal family life during the weeks.” 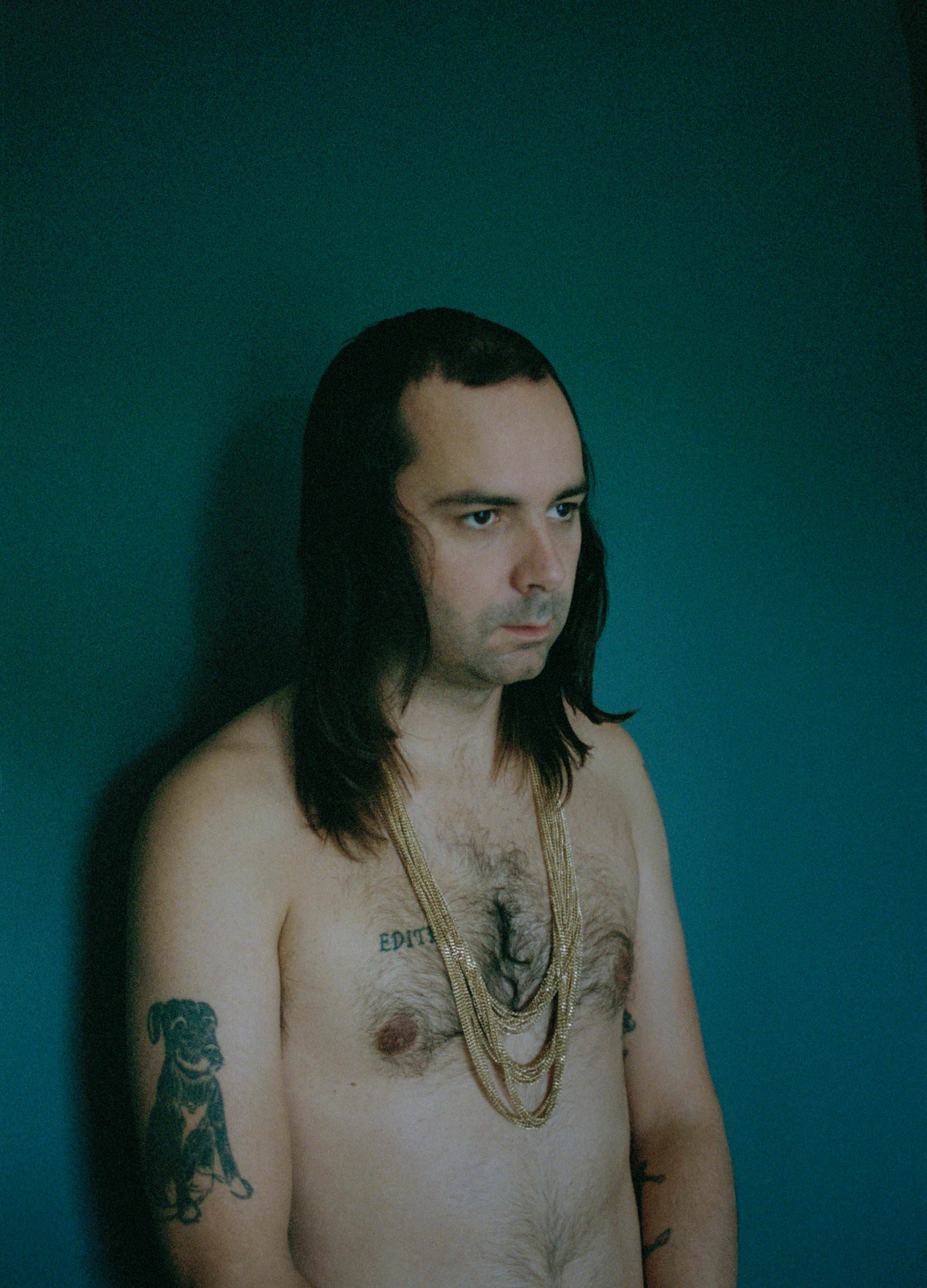 For the most part, weeks are split between performance and parenting, a clear distinction. But even within these obvious extremes, further contrast can be found. On stage, Mannerfelt takes the reigns as either a DJ and live artist, differentiating in preparation, performance and personability. This split has been a topic of reflection for Peder of late, due to a shifting balance between the two.

“I think that the split is still an important thing. Like a year or so ago, I mainly played live shows. When you do that, you really want to start playing DJ shows, and vice versa. I’m sure in a couple of weeks I’m really going to be longing for live shows. It’s always give and take. They’re quite different: I put more thought process into my DJ sets than a live show, which I kinda just press play and wake up an hour on the other side. I don’t really know what’s going on in a way. It’s all muscle memory.”

“In a DJ show, I get more feedback off that. I make the decisions more. The live shows are more for myself in a way. They’re a bit more self-indulgent. I think in a way it should be that when it’s live: it’s my music, it’s my performance. When I’m DJing, I’m there to rock the dancefloor. It’s not for me in the same way.”

The act of performance is intrinsically personal, despite Peder’s observations. Selecting and playing music to a collective body of people can be seen as a sonic embodiment of your taste, your style. Those records wouldn’t be in your bag if you didn’t feel something when you heard them, and your USB would never be full of tracks you didn’t like. Though his hell-raising techno suggests otherwise, Peder’s taste is as expansive as they come. Aside from the records he plays during his sets, punk and metal bands such as Refused and All Pigs Must Die often bellow out of the speakers in his studio. Thanks to his musical grounding in guitar-trashing bands, you can see elements of punk even today.

“I find that music pretty similar to techno in a way. I wouldn’t call it simple music, but it’s direct music, you know. It doesn’t have to overcomplicate things. The music I like is straight to business. There’s no meandering about, so I’d say that’s what I take with me. Kinda really short bursts of just…aggression I’d say. I quite enjoy that now. There are no solos…no shit. Just one and a half minutes of BOOM! That’s all you get. That’s one thing I can’t stand now. Guitar solos and stuff like that seems so boring to me right now..”

“I’d say the lightbulb moment, it all came together when I heard the new Beach House album that came out in the spring. I wasn’t sure I was going to do an album. When I heard that, I was so inspired by how solid an album it was. It’s been a long time since I pressed play on track one and listened the whole way through. I had this feeling like “Shit, I really need to finish this now.”

Far-flung samples, unrecognisable compared to their original form, help make Mannerfelt’s music as interesting and emotive as it is. His collection of African records have not only served as the soundtrack to late night listening, but have proved useful tools for music-making. The Swedish Congo Record, released in 2015 under Mannerfelt’s The Subliminal Kid alias, took recordings of traditional Congolese music and warped them into experimental distortions of their prior form. Daily Routine explores similar techniques, skewing vocal chords and looping opaque sounds to achieve texture and rhythm. Finding these samples, as technical as it may appear, is more playful in practise.

“Usually just hearing something and realising, like “shit this one! Yes!” Or you can be working on something, and something pops up in your head and it can be really silly. But a lot of times it doesn’t work. I have quite an extensive sample library that I’ve built up over the years. When you need inspiration just chuck in something, go through and click on files and something will happen. I really enjoy sampling stuff, but a lot of times I don’t end up using the samples. It can really help in the song-writing phase to have something that’s kinda finished in there as a framework, kinda like scaffolding I can take out afterwards.”

It’s clear, then, that there’s contrast throughout Mannerfelt – from his chosen method of performance, to his daily soundtrack.

Home life is “normal”. Grounded through family time and relaxation.

Rave life takes up a wilder complexion, as is inherent with “blasting techno.”

These opposites constitute his routine, serving as inspiration in the process. Then again, is routine truly ever the same…?

“I guess, with anything in daily life as well, you never really know what to expect.”