"A recollection of the most sublime festival experience I've ever had."

"A recollection of the most sublime festival experience I've ever had."

For most of the year, Ferropolis is a ‘museum’. To translate: it’s a multi-acre wasteland, a former mine. Still standing are five cranes and monoliths of heavy machinery, each well over 100 feet in height, each a monument to the site’s formative period. For one July weekend a year, Ferropolis is repurposed in the service of a singularly unlikely end: it’s the site of Melt festival, an event which is as much testament to human organisation and co-operation as a world cup on the moon.

Our experience begins Friday evening at the lakeside Meltselektor stage, where Mount Kimbie’s newfound affinity for post-punk perfectly complements our dramatic surroundings; the unrelenting, motorik rhythms of 'Blue Train Lines' and 'You Look Certain (I’m Not So Sure)' serve only to exaggerate the scale of Ferropolis’ cranes. Smart pacing and a tasteful integration of electronic and acoustic instrumentation allow Mount Kimbie’s more introspective works to shine, such as 'Marilyn' and an adaptation of old favourite, 'Carbonated', whose lovelorn push and pull foregrounds the water’s ebbs and flows.

From there, it’s time the main stage received a thorough investigation. Who’s playing is irrelevant. We quickly realise it’s Tyler, The Creator who’s been tasked with soundtracking this sunset. At this point the first questions arise concerning what we feel is a slightly confusing timetable; Tyler is an odd choice for the most symbolic slot on any given day at any given British festival. From this point on, the differences between Melt and its UK-based counterparts begin to unravel, and they’re myriad and massive. 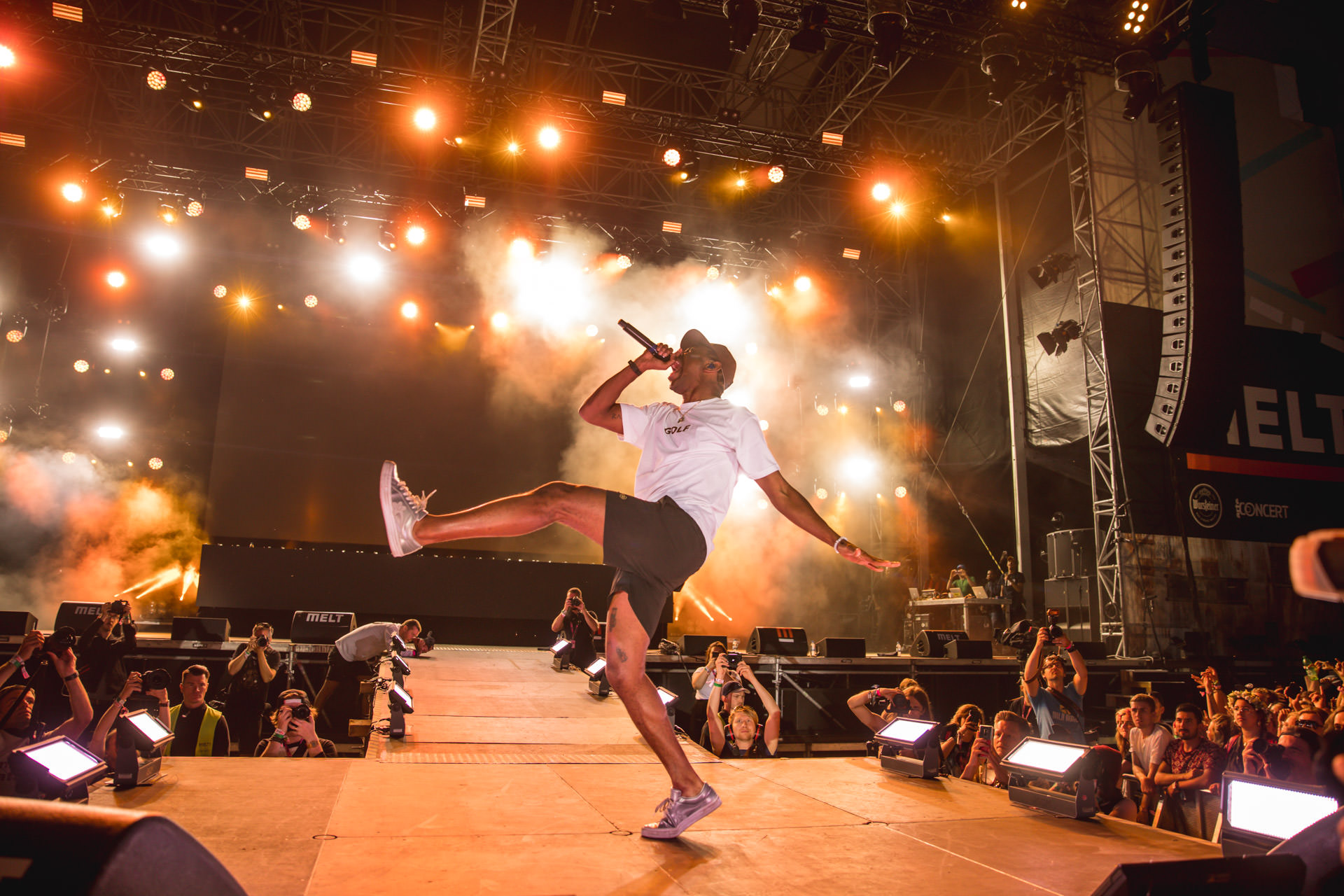 First, Melt proudly runs all weekend. No curfew, no slackening of quality programming and no surrender to exhaustion. This quickly alleviates anxieties about timetabling as whatever the hour, there’s a guarantee of something somewhere to one’s liking. As Friday night closes in, that proves to be the ecstatic triple threat of Nastia, Amelie Lens and Siriusmo - once the paper-thin effect of Florence Welch’s performative woke-talk had quickly worn off.

Nastia and Amelie are to be found on the big wheel stage, where Ferropolis’ imposing skyline is reflected in the decor. It’s as if watching two artists in their natural habitat. On arrival, it becomes clear that Amelie Lens isn’t one to waste time; she’s already inflicting upon a rabid crowd an onslaught of 130bpm-and-up techno in the effortless fashion that made her name, seamlessly picking up where Nastia left off. For a totally open-air festival, the atmosphere is certainly oppressive.

A quick trip back to the press tent to take five and refuel results in a surprise encounter with Siriusmo, whose impeccably produced, deeply surreal and often hilariously cartoonish techno is elevating the Meltselektor stage into a frenzy. Having from a young age been a fan who swears by his talent, I feel the small sense of pride one reserves for being promoted up from the conference at the crowd he’s drawn and the boundless fun they’re having. 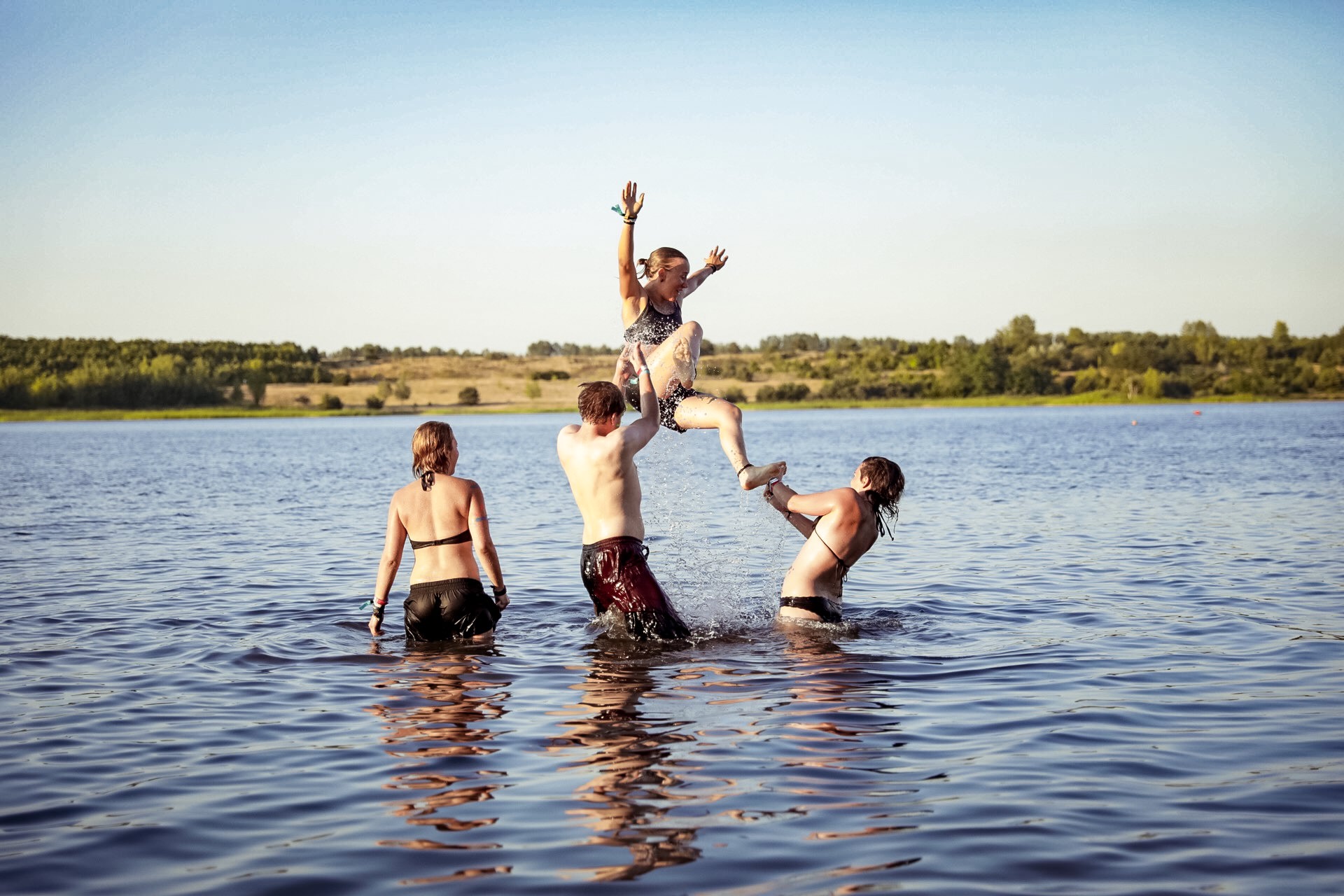 From then, we organise ourselves for Jon Hopkins, who seems something of a favourite with the press gang. He’s enjoyed acclaim throughout his career and is in the thick of touring his new full-length Singularity, and as such, I realise I’ve set my expectations impossibly high. His main stage audiovisual performance was spectacular, though, and it’s at this point I have to commend the sound at Melt: it’s clear that this is the festival Hopkins was always supposed to play. His intricate textural and melodic flourishes are broadcast breathtakingly clear, evoking all kinds of comparisons to the crystalline. Frankly, I’m astonished. Regardless of one’s thoughts on his material, you’d surely be hard-pressed to find a soundsystem that suits him better. The stage’s three large screens more than adequately handle the visual elements of this new A/V performance, and we head to the hotel to catch up on sleep happy, acutely aware that Saturday will be the ‘big one’.

After obliterating a Domino’s, we arrive at the site for Jyoty, the Saturday morning Rinse FM host whose seamless blend of house, club and occasionally RnB is more coherent than it has any right to be. It’s a sublime soundtrack for the Forest Stage, steeped in luscious woodland and flanked by Ferropolis’ lake. From there, we enjoy Roman Flügel’s colourful techno and Lanark Artefax’s utterly bewildering live show. Almost entirely arrhythmic, it alienates many, and the size of his crowd fluctuates throughout. From the refuge of his side-stage box, he plays undeterred, allowing his otherworldly sound design and ethereal live production to do the talking. In the centre of the stage is a ten-by-three-ish foot block, onto which is projected a compellingly accurate visual representation of the images his music conjures, and it’s utterly compelling. I clock the irony in an artist whose work interrogates consumerism playing on a stage boldly labelled ‘Superdry’. Mercifully, I remember my new year’s resolution and elect not to bring this up. 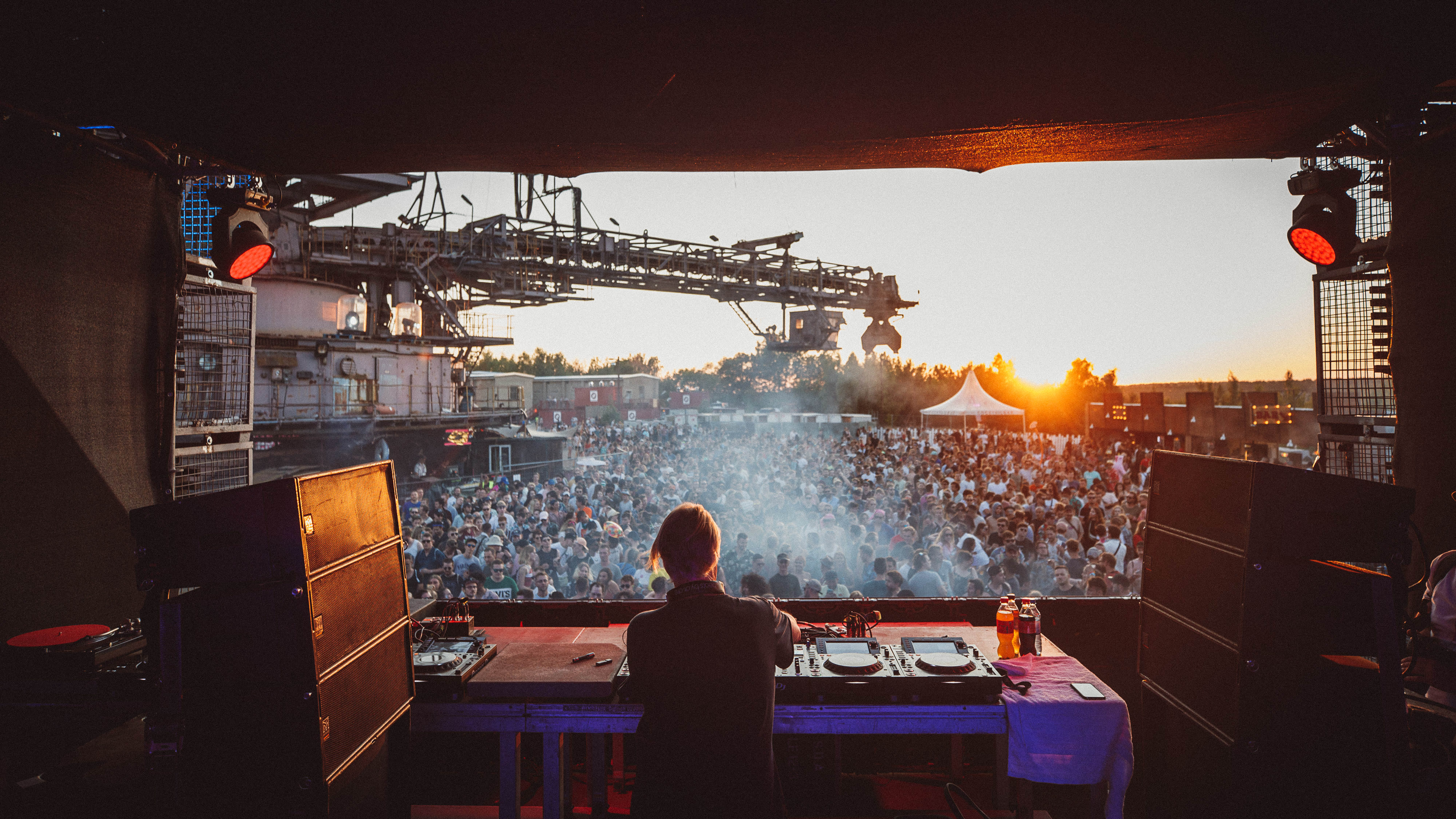 From that point, a marathon night begins. Fever Ray on the main stage, Nina Kraviz, Jayda G, Palms Trax on the big wheel and in the forest. Jayda and Palms deftly weave canonical Strictly Rhythm releases and contemporary classics to the elation of the crowd. There’s a trip to a viewing platform atop one of Ferropolis’ towering cranes. The shuttle bus overshoots our hotel by five miles. It doesn’t matter. The fun evidently tips the scales against the inconvenience.

A hazy Sunday afternoon sees us arrive at the site for what is agreed in advance to be a considerably more relaxed one. Australian disco upstarts and Daft Punk collaborators Parcels pride themselves on that rarest of musical and personal relationships; from the robotic, hyperreal tightness they demonstrate as a unit, it’s evident they know each other intimately as players and as friends. Alien to many punters, their initially small crowd has doubled in size by the end, prompting legions of new fans to transform the site into an episode of Soul Train, captured post-apocalypse. 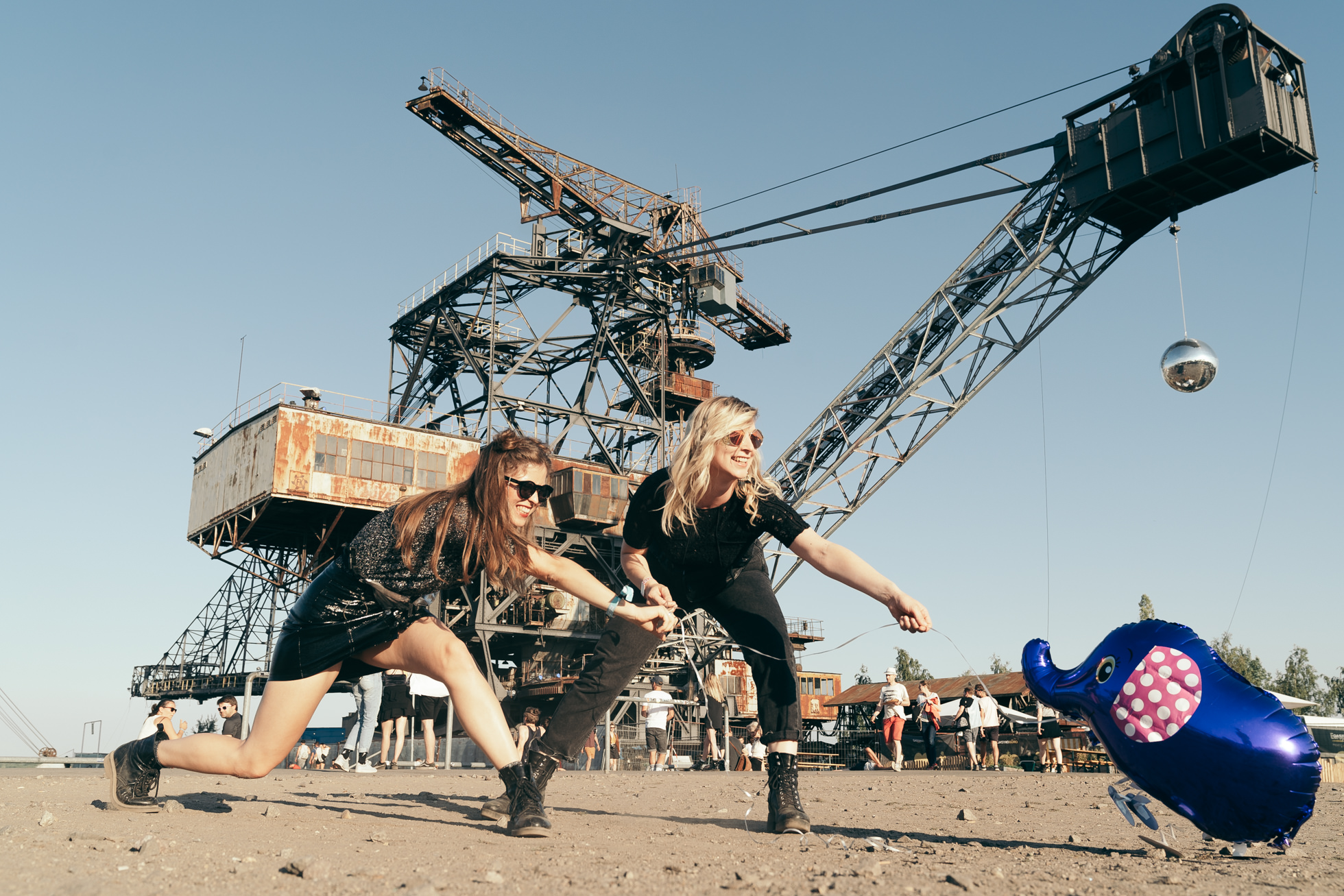 Or:la, sadly, is not given the opportunity to generate a crowd befitting of her stature as an artist; a friend rightly points out that a 7pm slot here is akin to a midday slot at a British festival. Seemingly unfazed, she capitalises on the opportunity, dishing out a corporal punishment of techno and hard-hitting house. A tragedy, then, that so many absent dancers deem it too early. Clearly, it was exactly what they had in mind for later, and with Sunday ending early, they’ll soon wish they’d been here.

As night rolls in, The XX welcome it to Ferropolis. With it comes an overwhelming sense of luck - just to attend a festival that so exerts itself on production and a sense of respect for the ticket buyer is an utter privilege. Their bass-laden lullabies lull our enthusiasm into something decidedly more sentimental: a longing for the weekend to never end, and a feverish excitement at the prospect of returning next year.

Also, there wasn’t any litter anywhere. What the fuck?!