Sometime in the early 90s, in a basement below some dodgy Paddington hotel, at a night called The Menace, the lights had come on at an unnaturally early hour (note for younger readers: it was the early 90s, that’s when clubs used to close much of the time – 2 or, if we were lucky, 3am) and as the smiling, sweaty faces of the Michiko-clad punters demanded one final record, whoever was guesting, quite possibly Fabi Paras, played Talking Heads’ Road To Nowhere. It was a perfect, early 90s Acid House moment. We know we are going nowhere, We know life is pointless, We know it’s all shit. But these pills, this record… It makes it all worthwhile. A genuine MDMA moment.

I was reminded of this while watching American Utopia, which features a truly joyous and uplifting version of Road To Nowhere performed by David Byrne and his band as part of the live concert extravaganza. It’s similarly ecstatic, a hands in the air, proper, E moment, one of those from when the pills were much better. What’s more, the intricate choreography of the show, makes for a dazzling spectacle. Yes, existence is futile. Yes, we are all irrelevant. But by golly, it sounds great. And look at us marching around the stage, seemingly in random moves, that suddenly come together and show we’re all perfectly co-ordinated. Isn’t life marvellous?

American Utopia Is a fairly straightforward film of the Broadway adaptation of the live set David Byrne has been touring for a couple of years, now with added stage show musical fairy dust. The concert is given extra oomph by a resurgent Spike Lee, who’s doing his best Jonathan Demme a la Stop Making Sense impression at the helm of this concert film. 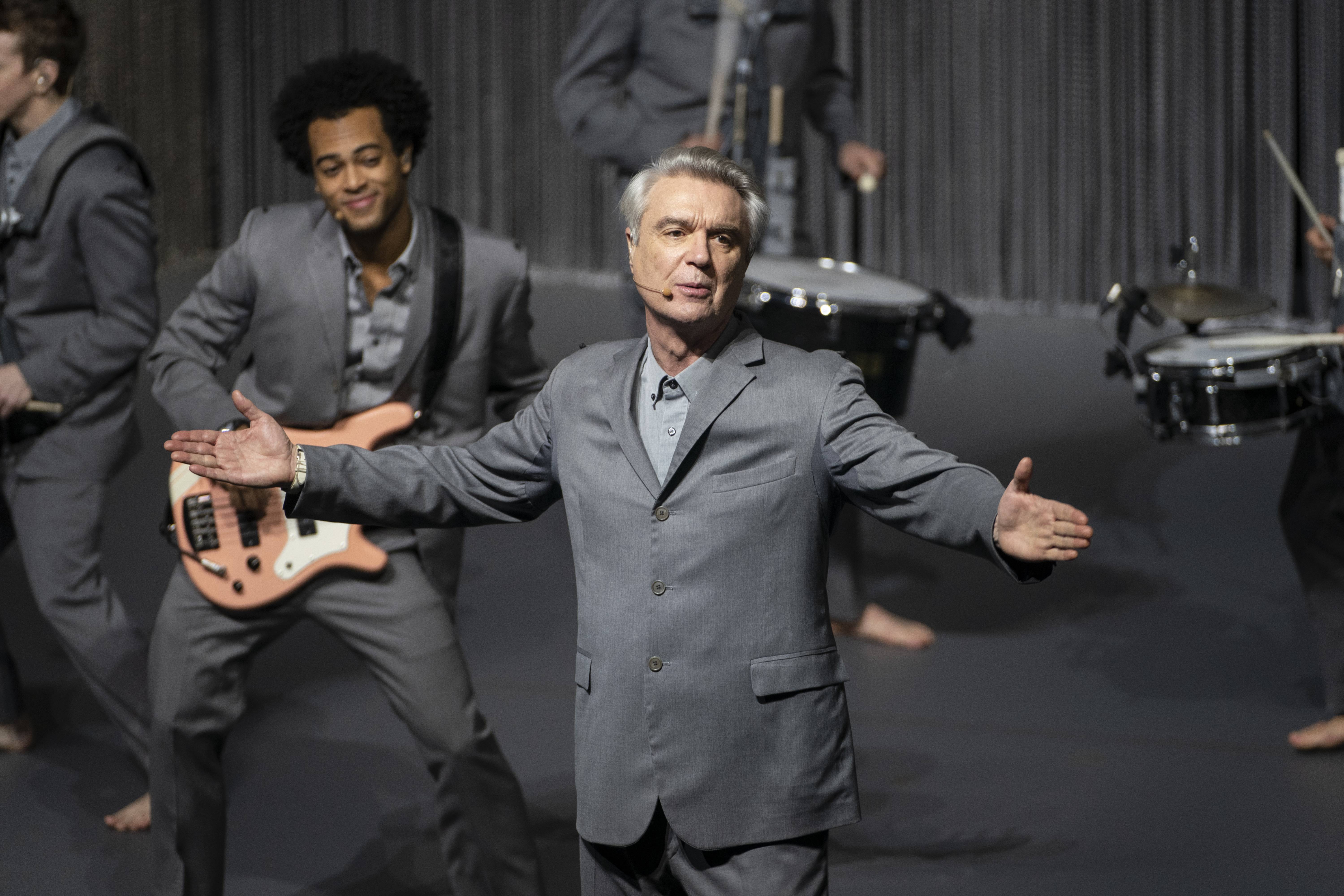 Of course, the shadow of Stop Making Sense, released in 1984, looms large over American Utopia. It is, after all, The Greatest Concert Movie Ever (© every chart of best concert films ever put together by the blokey music press). After all, psychedelic all-nighters at the Scala during the London repertory movie house’s heyday aside, it’s still the only time I’ve ever seen people get up and dance in a cinema (not once but twice too – when it opened in London and, a few months later, in Berlin).

Having seen the live show at Hammersmith, key differences between American Utopia and the original gig material included the fact that there was no-one shouting “sing Lazy you cunt” in my ear. (This is an old Faith Fanzine running joke that involved someone trying to persuade Rocky from X-press 2 to sing a version of their hit collaboration with the former Talking Head to prove he was involved in the record. “I didn’t sing on it,” he protested. “Sing Lazy you cunt,” came the reply). That’s possibly a plus (funny as it was on the night), although on the downside, you get to see that neither Byrne nor any of the musicians and singers stalking the stage (it’s filmed in a box, with roving musicians and no stage set-up as such) are wearing shoes – there are bare feet aplenty, giving rise to all sorts of fears while viewing (“they're going to have to watch out for splinters”, “their feet must be filthy”, “ugh, hairy toes” etc). It’s one of the most unpleasant feet-in-documentary-film moments from recent years, bested only, perhaps, by Iggy Pop spending most of the Stooges doc massaging his bare feet with nary a care in the world or the distress it was causing feet-phobic fans watching. 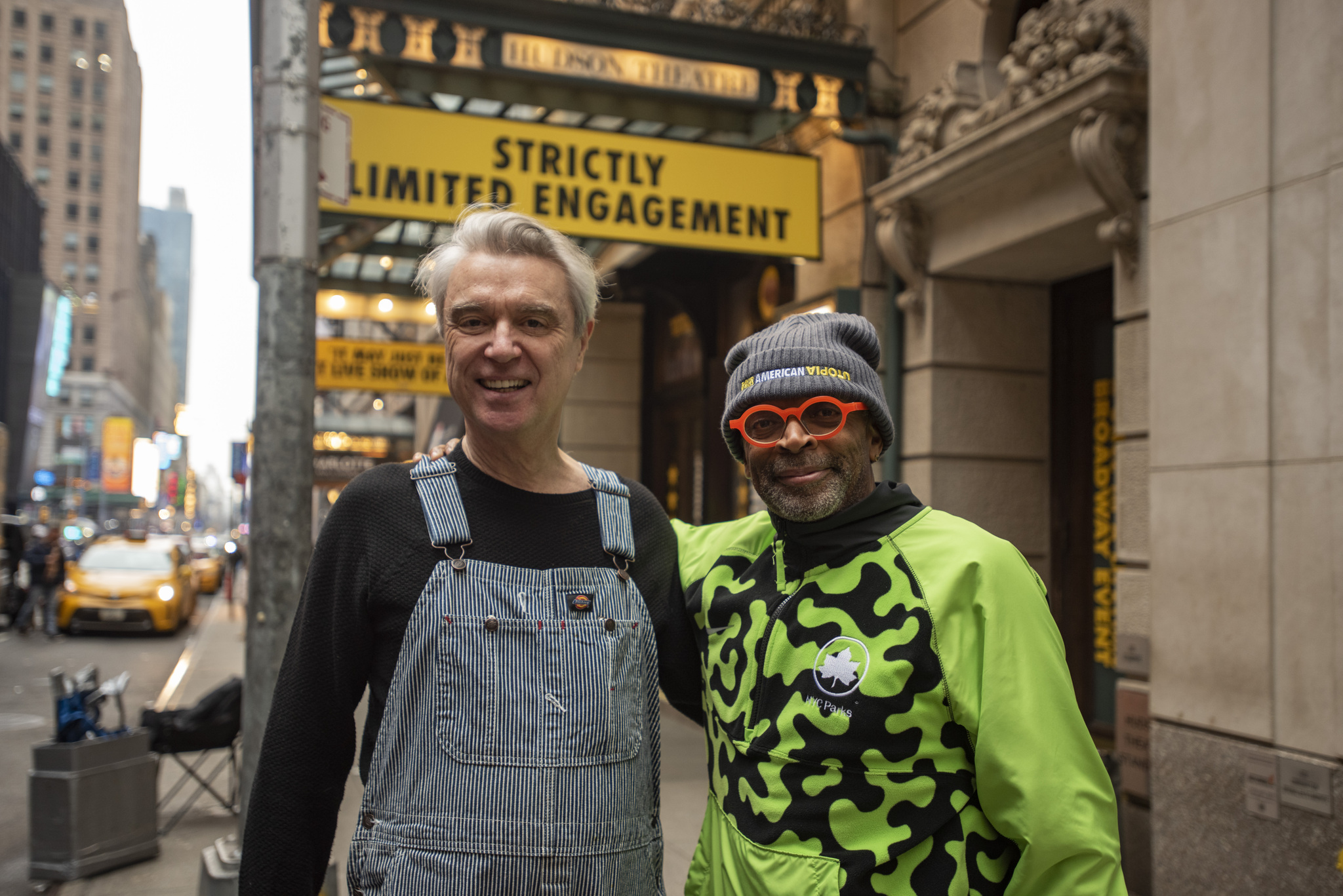 Minor podiatry gripes aside, there’s loads more feelgood moments throughout, Byrne has always been a key character among the original UK house and balearic cognoscenti – my first time in an acid house back in 1988 included, vivid memory this, Once In A Lifetime, one of the many Talking Heads tunes that helped soundtrack all sorts of shenanigans. Lazy cemented his post-acid dancefloor credentials, a slew of edits over the past decade or more (Greg Wilson, Psychemagick, every Tom, Dick and Harry with a laptop) have ensured his status as Balearic Royalty. American Utopia sees Byrne dipping into his back catalogue for a wealth of dance-friendly classics, punctuated with his trademark awkward and witty song introductions. I Zimbra is, of course, a bona fide Paradise Garage and early 80s New York punk goes funk classic and still sets the pulse racing. Its inclusion here a genuine highlight, his explanation of the lyrics a treat. And Byrne also offers up plenty of timely political commentary, not least in the awe-inspiring cover of Janelle Monae’s Hell You Talbout, chanting the names of African Americans killed by police or racial violence.

When it’s lucky if you’ve seen anyone performing live for, I dunno, 12 months or more, then American Utopia is a reminder of the joys and celebratory nature of the live stage, the concert as communal experience and the uplifting and healing nature of music. It’s as close to getting to a gig of any sorts that you’re going to get for a while, so you might as well enjoy it. Heck, you can even forgive some of the endless dad dancing from, well, middle-aged dads in the audience (like Stop Making Sense, you slowly see more of the divs in the crowd as time progresses, before going full embarrassing nerdy moves towards the climax).

Oh, and stick around for the very end too – David Byrne on his bike is a genuinely heart-warming moment. This then is a feelgood film for these times – MDMA for the soul.

Host, the low budget, Zoom call horror became one of the pandemic’s most talked about movies. Now, with a gorgeous Blu-ray out, director Rob Savage talks about the joys of physical media and how to make a lockdown hit…