Today I want to write about the curious syncretic point where pagan beliefs, magic, desire, and the veneration of early martyrs meet. Along the way I’m going to discuss the romantic poetry of Keats, the spittle flecked maniacs of the Daily Mail, and how you, virgin women, can use a long forgotten winter folk spell to foretell your future love. Guys, you’ll get to learn a spell too, but, full disclosure; it’s a bit grim.

There is a vague belief that Britain is – or was at least – ‘a Christian country’ – it’s a claim still referred to by politicians and media outlets (and by media outlets, I mean the Daily Mail), usually to infer that a new development in culture is somehow against this Christianity. In this usage, ‘Christianity’ becomes a sort of dog whistle short hand, telegraphing a host of values and positions that prioritise tradition and conservatism – as with David Cameron’s recent affirmation’s that the country is drawn along Christian lines, and the Daily Mail’s subsequent sabre rattling when a host of well-meaning academics complained*. To be fair, the idea that England is a Christian country does kind of work, but only if you accept two things:

As such, I would argue that it would be just as appropriate to claim we live in a pagan country, with the increasingly threadbare gauze of Christianity stretched over the top. To illustrate this, I want to talk about a popular folk ritual that used to take place on January 20th, also known as St. Agnes’ Eve.

Martyred at 13, St Agnes is still a major figure in Catholic teachings. Her name is read in the daily Mass, and her skull can be visited at Rome’s Sant'Agnese in Agone church – here it is:

The stories of her martyrdom are pretty confused in the detail, but follow a roughly similar pattern. She was born into a Christian family in Rome sometime around 291 AD, and apparently grew to be a rare beauty. When she refuted the advances of a young Roman suitor, he was so incensed that he reported her Christianity to the local law man; Prefect Sempronius. This was a time when the Roman Emperor Diocletian, a firm believer in the ancient Roman pantheon, was kicking off a mass persecution against Christians. Sempronius, in keeping with the consensus of the day, demanded Agnes renounce God. Agnes refused, apparently laughing at the various torture instruments Sempronius showed. Incensed, he announced that she be stripped and dragged through the streets to a brothel, where all and sundry could have their way with her. When she got to the brothel, the story fragments a little. My favourite telling has Agnes sprouting a sort of hirsute chastity belt, with long, thick hair growing over her body whenever any dirtbird tried to grab her. Other renditions have angels blinding any who came near, and most versions feature one particular miscreant grabbing her, only to be struck dead by God, to be revived by Agnes’s fervent, forgiving prayer.

When it became clear that no one was getting any, the Prefect threw a shit fit and decided to have her killed, which he promptly did, either by fire, or beheading or having a sword put through her throat- no one’s quite sure. One way or another, she was killed. Since then Agnes has passed into Catholic mythology, the saint of betrothed couples, rape victims, chastity, virgins, girls, and (and I have no idea why-) gardeners.

So now, to the St Agnes’s Eve rituals of England.

I recently picked up a copy of the Encyclopedia of Superstitions (henceforth, EoS) it’s an incredible survey of English folk traditions, first compiled by Edwin & Mona Radford in 1948, then updated and extended by folklore specialist Christina Hole in 1961. Here’s what it looks like: 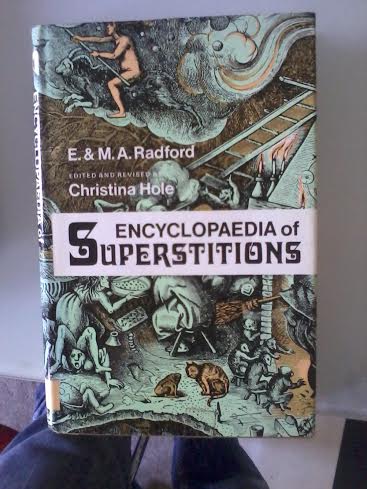 And check out this angry little fellow on the back. Is he dancing? Is he raging? Is he both?: 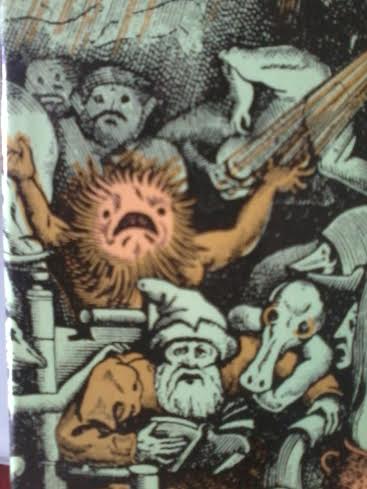 In the book, I came across this fascinating ritual of the Dumb Cake, and I think it really illustrates the syncretic nature of English Christianity. Dumb Cake’s were granted potency on a number of occasions through the year – a telling fudge of ecclesiastical and pagan dates that include St Mark’s Eve**, Halloween, Midsummers Eve and, most often of all, St Agnes’s Eve.

The cake was a widely used charm to induce a vision of a future partner. Different regions in England had different techniques to conjure up the mystical forces. In Oxfordshire it was recorded that a fasting woman would bake the cake, prick her initials onto it with a pin, then retire to bed before midnight, leaving the cake on a hearthstone (as I type this, I realise I don’t actually know what the hell a hearth stone is. “A flat stone forming a hearth” the internet tells me. Thanks). At midnight, the ‘fetch’, or spirit, of her future husband would enter her house and prick his own initials into the cake. As the EoS has it,

“Care had to be taken that the house-door was left open for him from the moment the charm was started until after he had left, for if he came and found it shut something terrible would happen.”

Elsewhere the Dumb Cake ritual was a darker affair.

In the Midlands, the cake would be baked on St Agnes’s Eve by three girls together. They would have to remain silent throughout the entire process that followed, hence the titular ‘Dumb’ of the cake. Once the cake was baked the girls would eat it together – still silent – at exactly midnight. The cake finished, they would walk backwards to their respective beds, but before doing so they would undo all the fastenings on their clothes. There was good reason for this. As they walked backwards, assuming the charm had been performed correctly, the apparitions of their future husbands would appear, chasing the girls, snatching at their clothes –

“[as] these had already been loosened, their wearers could slip safely out of them without being grasped by ghostly hands, and once they were in bed, the visions would vanish. What exactly would happen if the phantoms did succeed in seizing them is not clear, but almost certainly, the consequences would have been extremely ominous.” (EoS p.144)

I love how spooky this whole set up is – the sheer act of remaining silent for time it must have taken to make and consume the cake would have heightened the experience to quite a sinister level. When taken in context of the particulars of St Agnes’s death, the conflation of being chased by apparently rape-y ghost suitors with St Agnes’s Eve is particularly strange. There’s probably a fine Brit Horror movie in here somewhere. Hammer, get in touch.

With a bit of poking about I’ve managed to find this recipe for the Dumb Cake – on the down side, it’s not going to win any Bake Off awards. On the upside, it doesn’t require any mad oldey timey ingredients like quail shank:

An egg-shell-full of wheat meal.

That sounds easy enough. If anyone fancies making this on Jan 21st, then reporting back, there’s a column on Ransom Note with your name on it….

According to EoS, in some parts of England the tradition did away with the cake altogether, with the woman instead boiling an egg, emptying it out, filling the shell with salt, then eating the lot, shell and all (mmmmmm!), then heading to bed, backwards, whilst chanting

If ever I be to marry man,

Or even man to marry me

I hope him this night to see.”

But I prefer the cake version.***

As an indicator of how ingrained the perceived precognitive powers of St Agnes’s Eve were, it’s worth noting that the whole mystical set up formed the backdrop to John Keats’ celebrated epic of 1884, The Eve of St Agnes. In it, Keats tells the story of a young woman, Madeline, who has heard of the power of St Agnes to cause future lovers to appear;

And soft adorings from their loves receive

Upon the honey'd middle of the night,

If ceremonies due they did aright;

As, supperless to bed they must retire,

Nor look behind, nor sideways, but require

Of Heaven with upward eyes for all that they desire.”

The poem itself is quite beautiful- Madeline goes on to dream of her lover, a staunch enemy of her family, only to wake and find him in her room, drawn by the power of St Agnes’s Eve. They elope and Madeline’s father dies, and no doubt there’s a whole lot of psychoanalysis that can be applied there.

I guess what I find interesting is that the Keats poem is seen as one of the milestones of English literary tradition, and this is the kind of tradition that is often referred to as ‘Christian’, or has come to occupy a position of ‘respectable’ or ‘high’ culture in the minds of conservatives – despite dealing sympathetically with the distinctly radical concepts of youthful sexuality and pagan ritual. So often I feel that our past is being repackaged to justify the prejudices of the present- it’s worth stopping and noting what an enchanted, idiosyncratic island we really are. Don’t let the bastards colonise the past.

Oh, and men – as I said at the start, the whole Dumb Cake thing works for you – except it’s not a cake. According to the EoS, to see your future wife, you’ve got to chow down a raw red herring, bones and all. Probably best just waiting and seeing eh.

*On a side note, I love the line in that Daily Mail piece insisting that “our laws are largely based on Christian values-” I’m not sure how a punitive justice system fits into big JCs teachings, but I’d love to hear someone lay it out for me.

** I couldn’t really fit the St Mark’s stuff in  in this piece, but it involved baking the cake and sewing a load of hemp seed. That’s right; women looking for partners would sprinkle a load of ganga flax onto their garden and chant

“Hemp-seed I sow;
Hemp-seed I grow;
He that is my true love
Come after me, and mow.”

Not sure where that fits in with the current UK drugs policy tbh.