Waking up to Brexit Britain on a frosty morning somewhere between the Xmas and NY excesses, I’m reminded of the dream-like spectacle of future-thinking escapism that I’d experienced two weeks prior to Christmas.

Spanning four days - just as the festive period is taking full hold of your sanity - Wonderfruit is the perfect antidote to the onslaught that the December period brings back home. 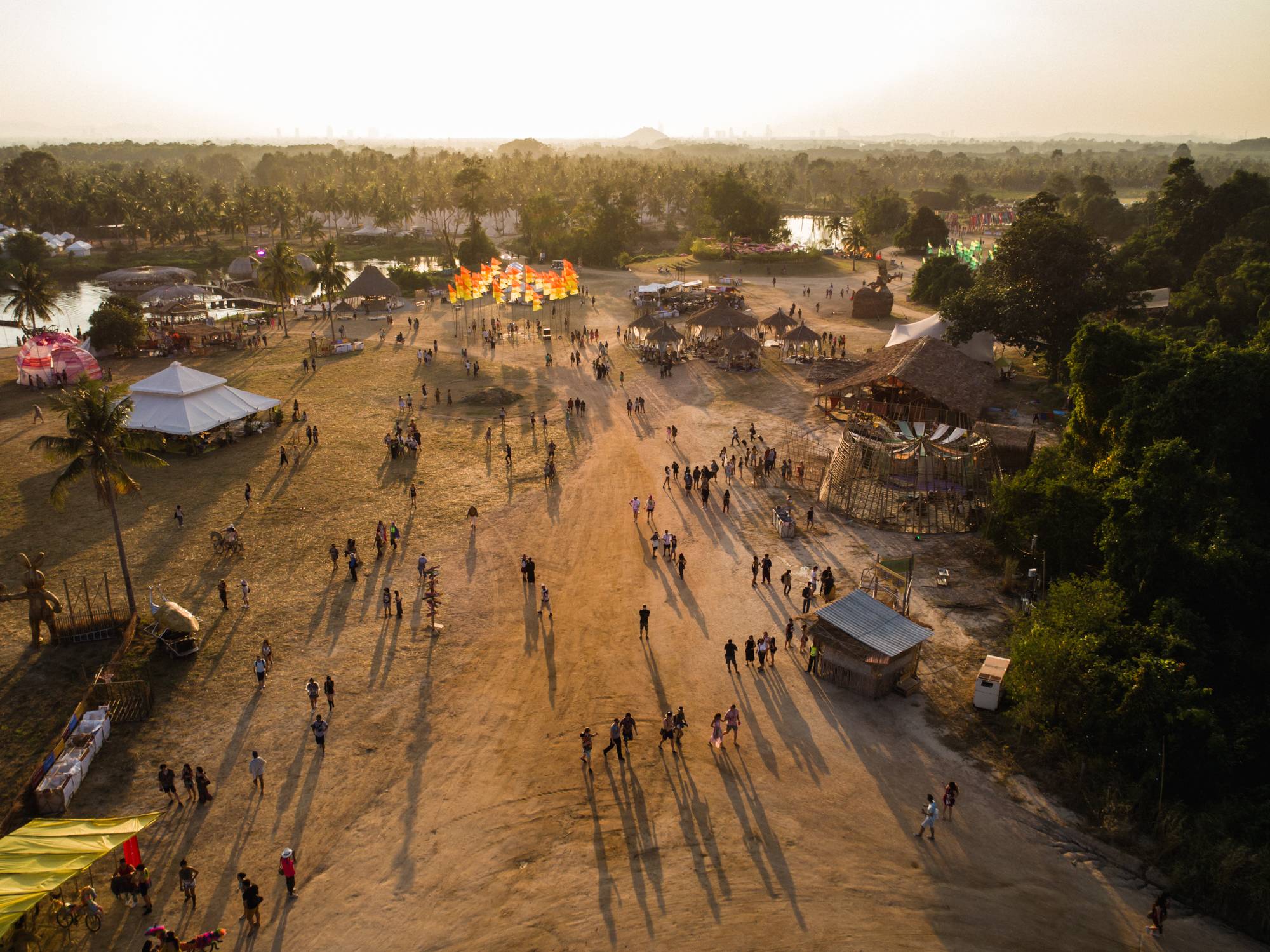 The self-styled ‘sustainable city’ has been lauded as Southeast Asia’s answer to Burning Man, which feels slightly like it’s underselling itself/doing it somewhat of a disservice. Wonderfruit is an incredibly inclusive festival and felt like all the best bits of Glastonbury - Block 9, the Green Fields, Arcadia etc - condensed into a much more manageable space. Add to that glorious 25 degree heat and Thai cuisine on tap... and no Mumford & Sons fans to be seen. It’s quite possibly one of the best festivals we’ve ever been to. 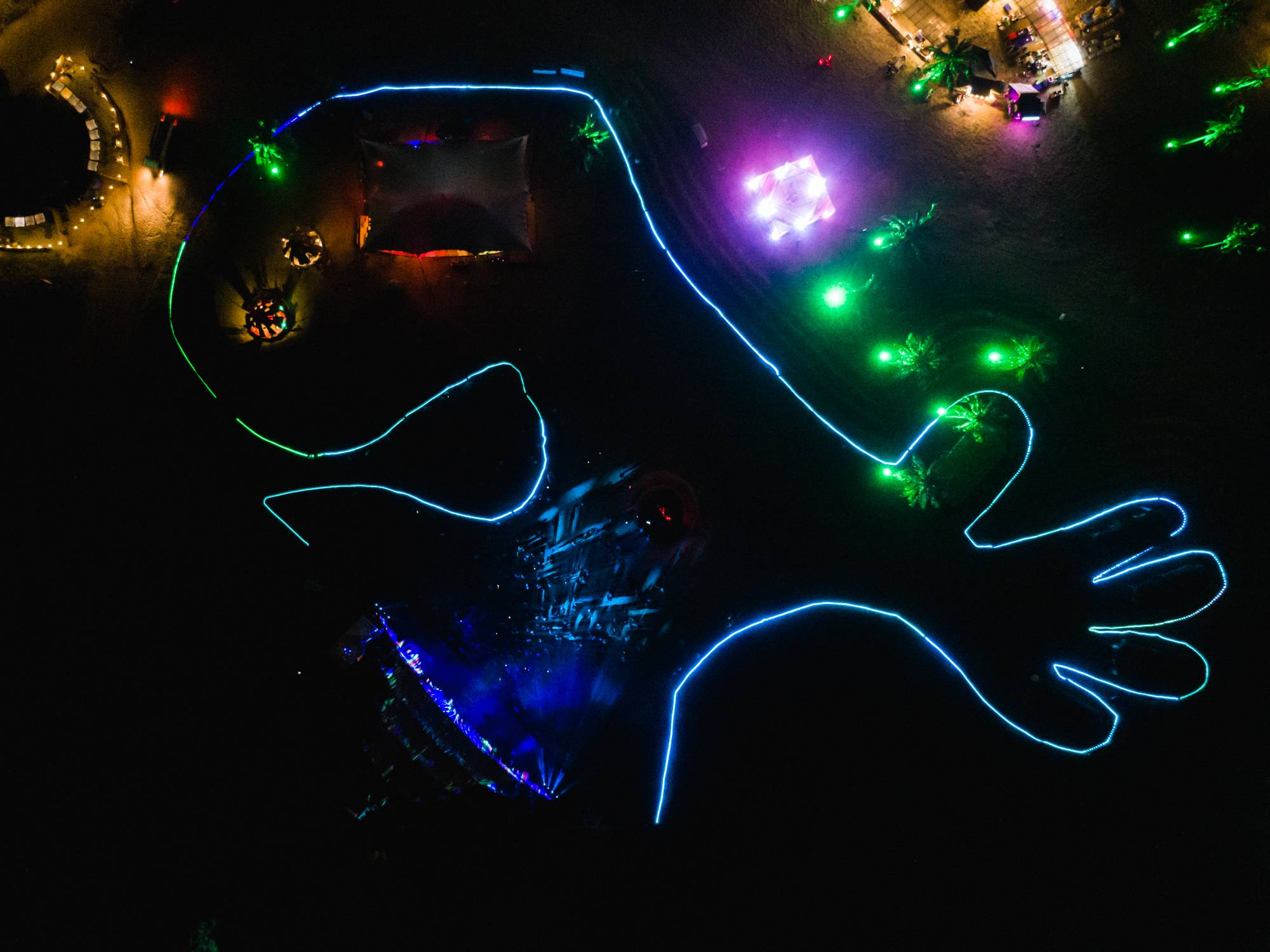 The festival site is by all accounts a slice of paradise. It’s set over the fields of the Siam Country Club near the seaside town of Pattaya, but don’t let that put you off, it’s hidden way away from the seedy underbelly of the town and the rep that precedes it.

Wonderfruit doesn’t promote itself as a music festival first and foremost, though there’s an incredibly diverse programme across the whole weekend. 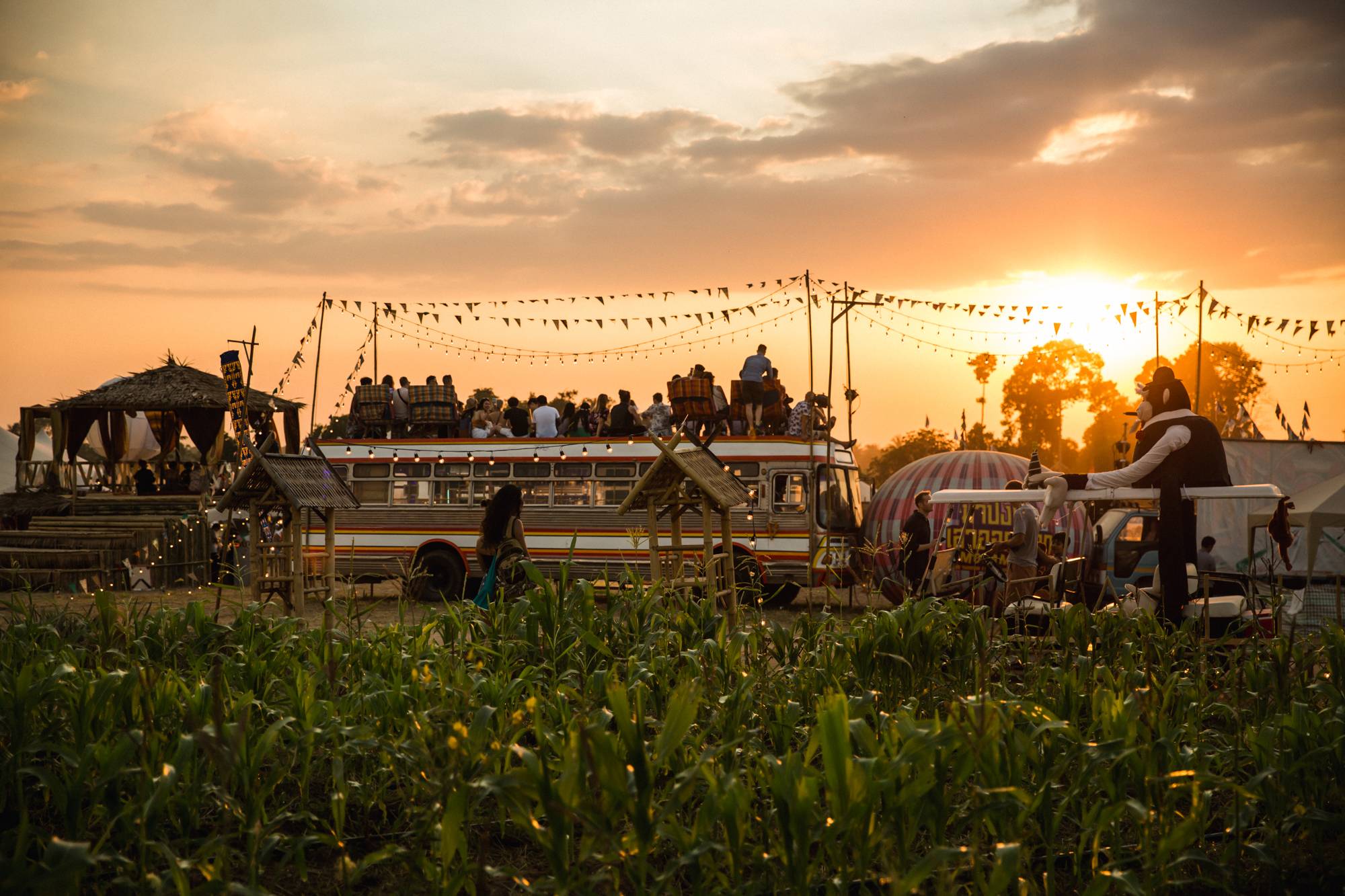 Styled upon six pillars: “arts, music, farm to feast, wellness and adventure, talks, workshops, and family. These pillars ensure that we curate a diverse programme that is inclusive for artists, speakers, musicians, and DJs from around the region. To do so, we incorporate education and entertainment (or “edutainment”) into the festival, and our guests form meaningful connections and become more mindfully conscious consumers with regard to the natural environment.” So far, so very idealistic, utopian dream. But scratching just a tiny way below the surface, you realise how deep this runs through all that the festival does and what could often be construed in a European festival as marketing guff, actually felt like it was realised at Wonderfruit. 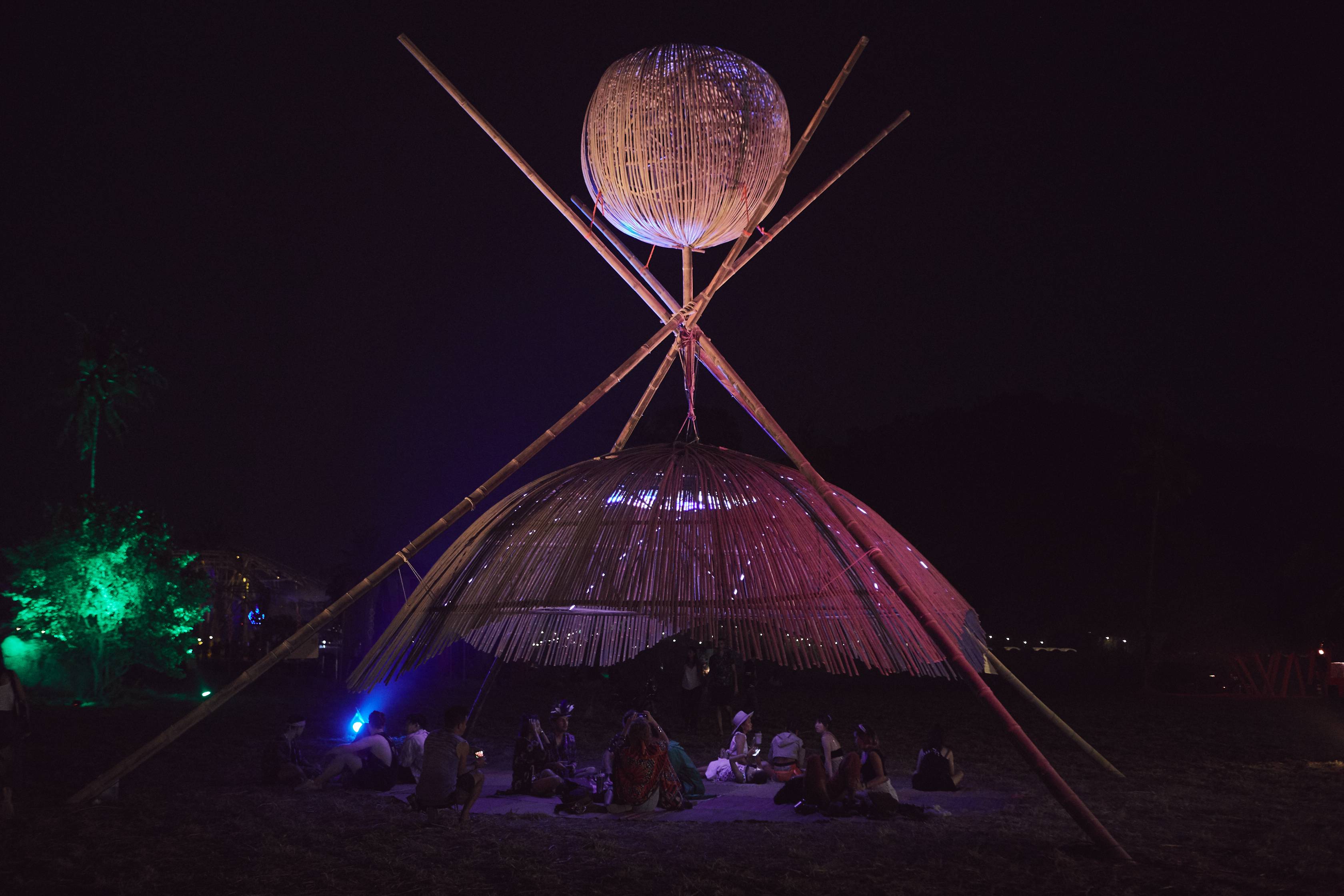 Everything in the fields is constructed from sustainable materials - from the stages, art installations, multi-use spaces, all the way down to everyday food stalls - all are made with locally-sourced or recycled materials such as bamboo, hemp and mud which either melt back into the ground or remain standing all year round. Promoting a “zero landfill” approach to any waste, the security on the gate are more concerned with that errant plastic water bottle in your rucksack than the forgotten whisky miniatures from the plane. All festival attendees are requested to bring their own water bottle and drinking cup - there are no drinks served in single-use cups on-site and any water comes either from the fresh, filtered supply that runs directly into the site or in cartons that are then flattened and recycled. These cartons are then turned into tiles that are used for next year’s decking, roofing and other structures throughout the site.

All this means that for starters you’re not swimming in a sea of plastic cups at the end of each night. All the rubbish disposal areas have “This is not trash” stamped on them, inviting the attendee to think about what it is you’re depositing and where it’s going - cartons and paper, glass, food waste etc. We’re too often all guilty of binning something without any thought or consequence for where it goes next. The approach at this festival guides you into considering what happens to everything you’re throwing away. There’s even consideration gone into where the grey water goes and how it’s processed.

Of course the argument here is that a large proportion of the international crowd - attendees from further afield in the South and East of Asia, the US, Australia and beyond - will have gotten on a plane and various other forms of transport to get here, defeating the concept of the zero-impact approach. Not that this is any form a justification but we do all think nothing of getting on a budget flight to a festival in Europe and of tearing through a mountain of plastic paraphernalia on our journeys. 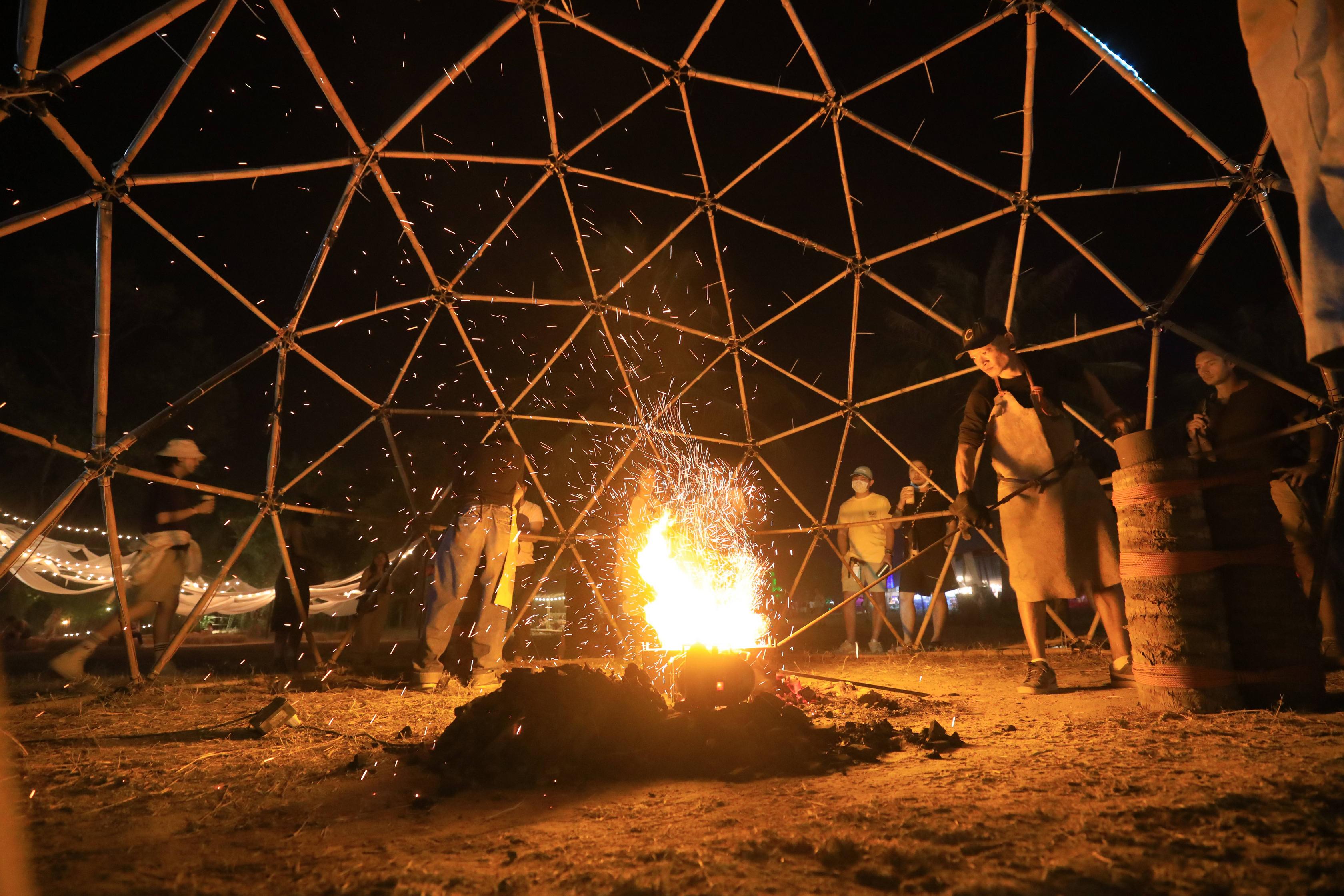 Personally, given the lasting effect it’s had on me and the way I view a festival moving forwards, I would say it was worth my own footprint to understand a new global blueprint for how all large scale events and festivals can operate. Whether that means I should be allowed to go again next year and instead let someone else go is a different argument, right? 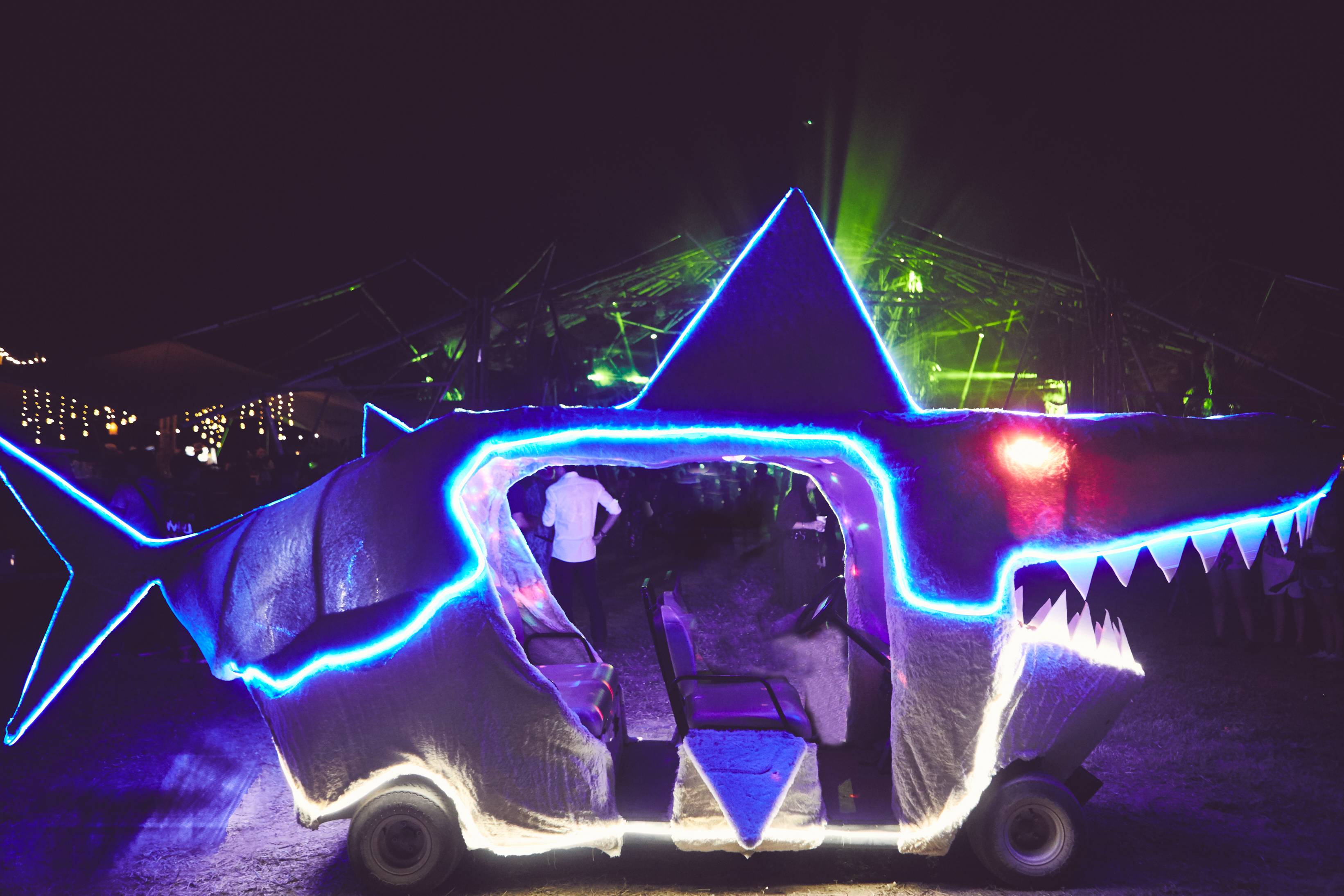 Musically, this is no European business techno, spreadsheet booking affair. Yes, the big hitters of Floating Points and Four Tet are in attendance but you could argue they’re the least rewarding of experiences of the festival’s programming. A veritable smorgasbord of well curated homegrown and international artists tempered the weekend perfectly. On Thursday night inside the amazing Neramit structure we find Howie B and Craig Richards warming up the first evening weaving through heavy digi-dub, and elsewhere stumble across the Polygon stage - a pretty spectacular 3D sound and visuals Arcadia-style construction which we find ourselves back at throughout the weekend. The ‘immersive sound bath’ that kicks things off that evening is quite a sensory overload. 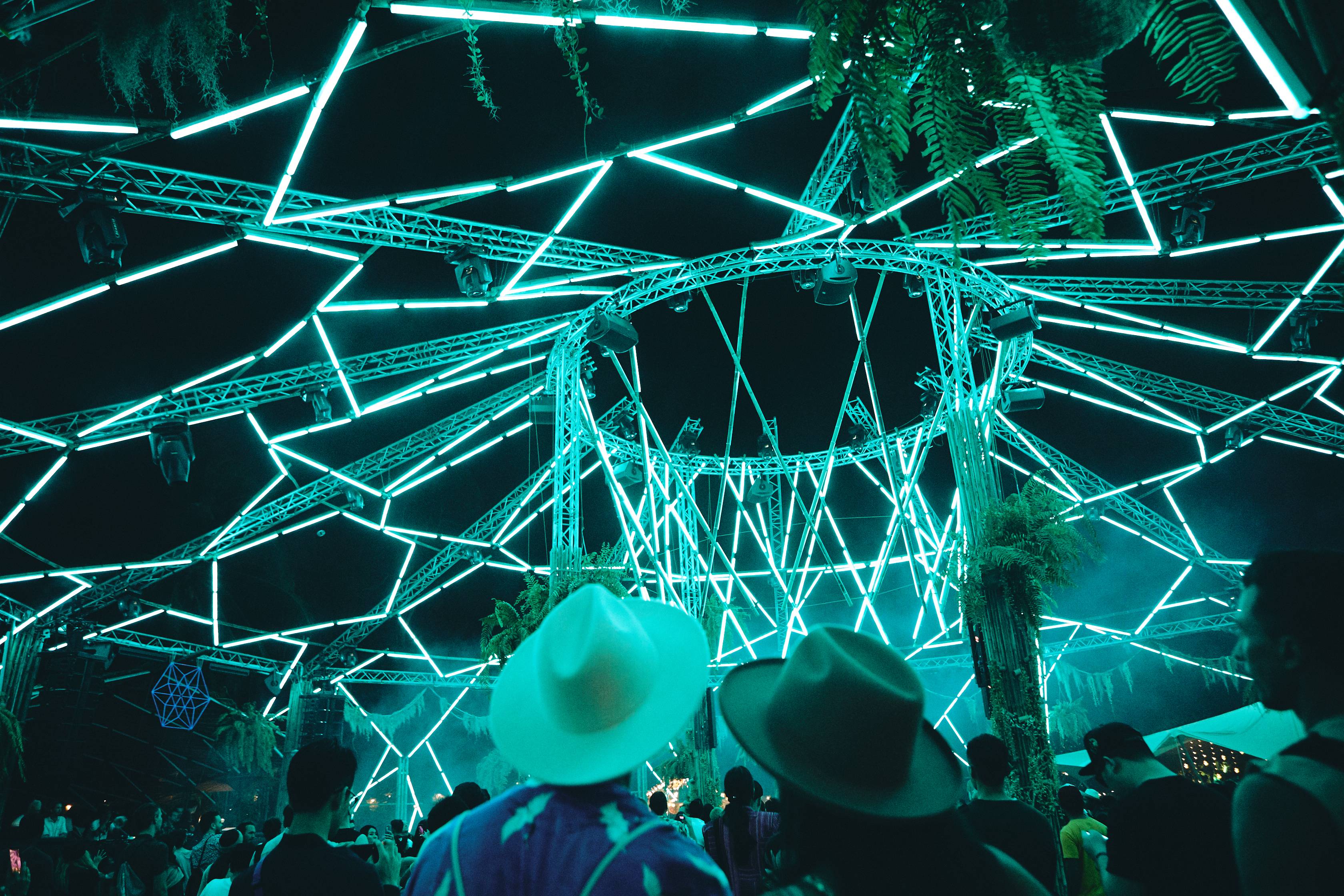 Craig Richards also curates one of the weekend’s many highlights in the form of The Quarry stage where Willow, Nick The Record, Felix Dickinson, Bobby, Binh, Sonja Moonear and more take over proceedings. Festival founder Pete excitedly cycles us around the area showing off the video screen in front of the booth, which means you don’t know who’s playing there throughout the evening. This is either because they deem Craig and co. too big a pull to publish set times, for fear of overcrowding or just another reason that this festival seems to like to take the path of most resistance with things. 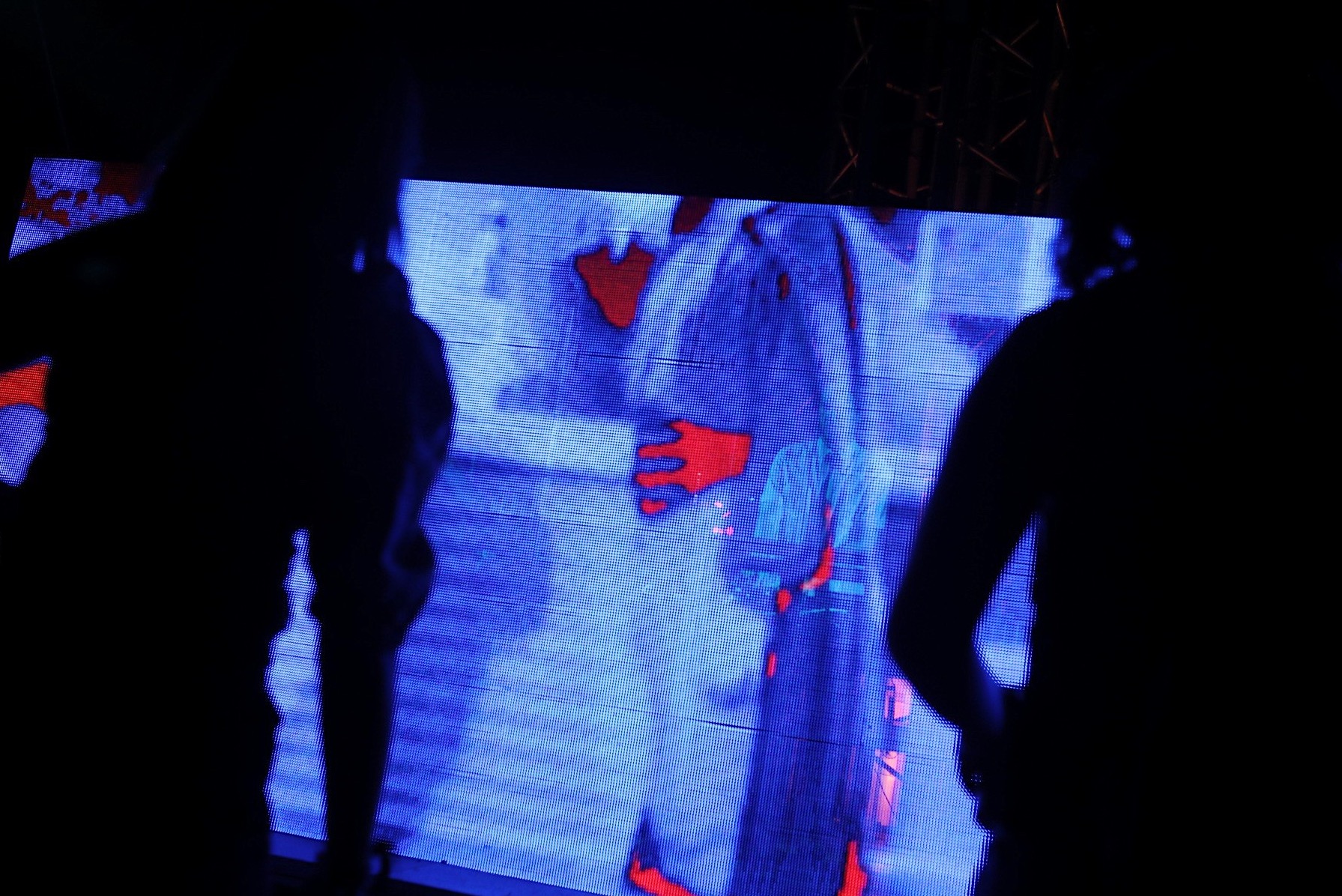 And it’s this path and the finer details that go into the outer corners that are the most rewarding across the weekend. “As the festival’s evolved, we deliberately didn’t want to have a ‘main stage” Pete says. So they don’t and it’s all the better for it - though the Solar Stage assumes the “main stage” role of sorts as the dawn breaks and again when the sun goes down. 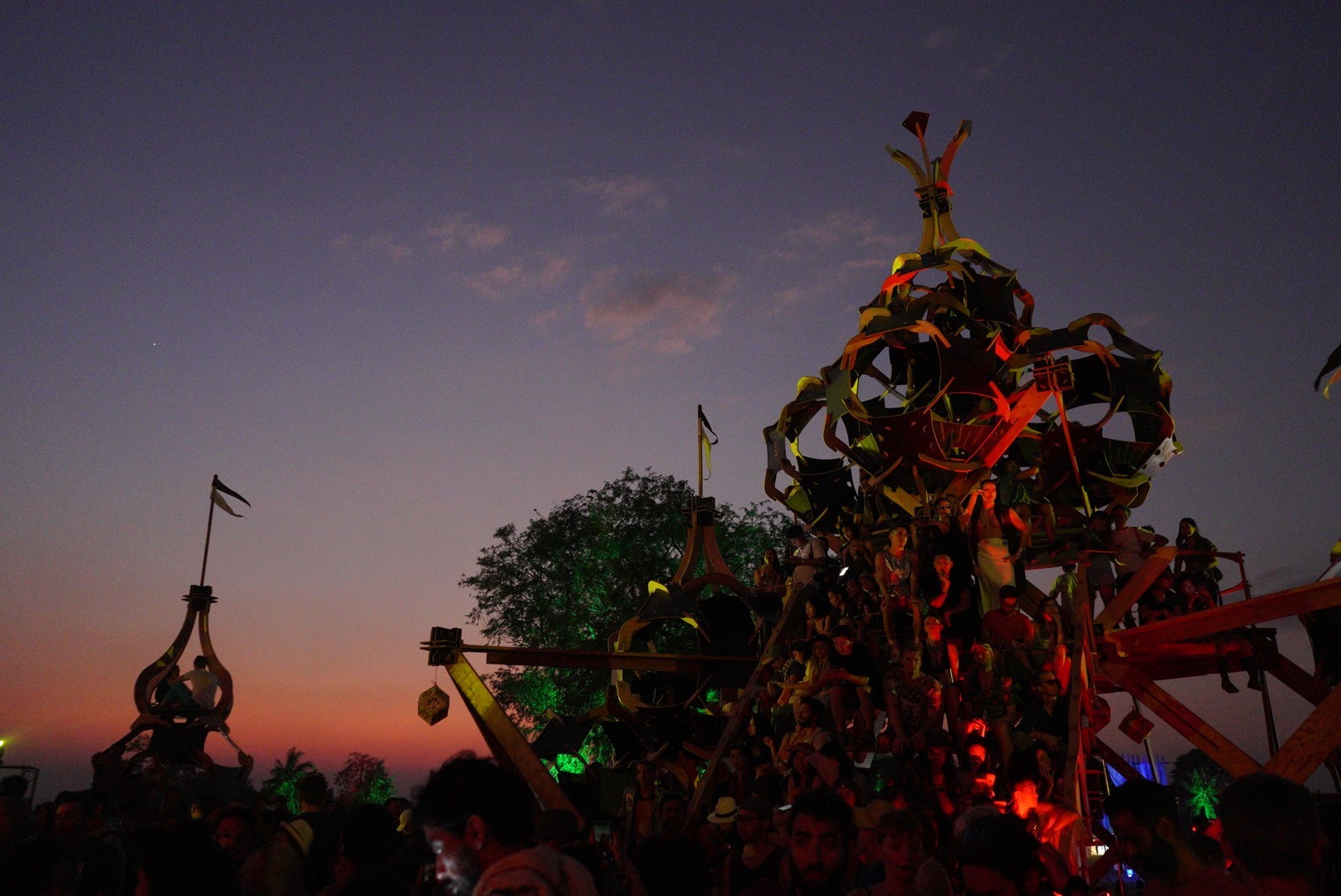 In terms of the staging, the organisers enlisted architects and designers from near and far to realise their own particular visions. There’s a ‘crew’ or ‘camp’ mentality with each of the unique stages, hence the burn comparisons. The Solar Stage was conceived by Artist and architect Gregg Fleishman who transported his Otic Oasis from Burning Man to Wonderfruit. A modular structure, the pieces fit together like a 3D jigsaw puzzle, requiring no nails. And it’s still strong enough to let people clamber all over it deep into the night. 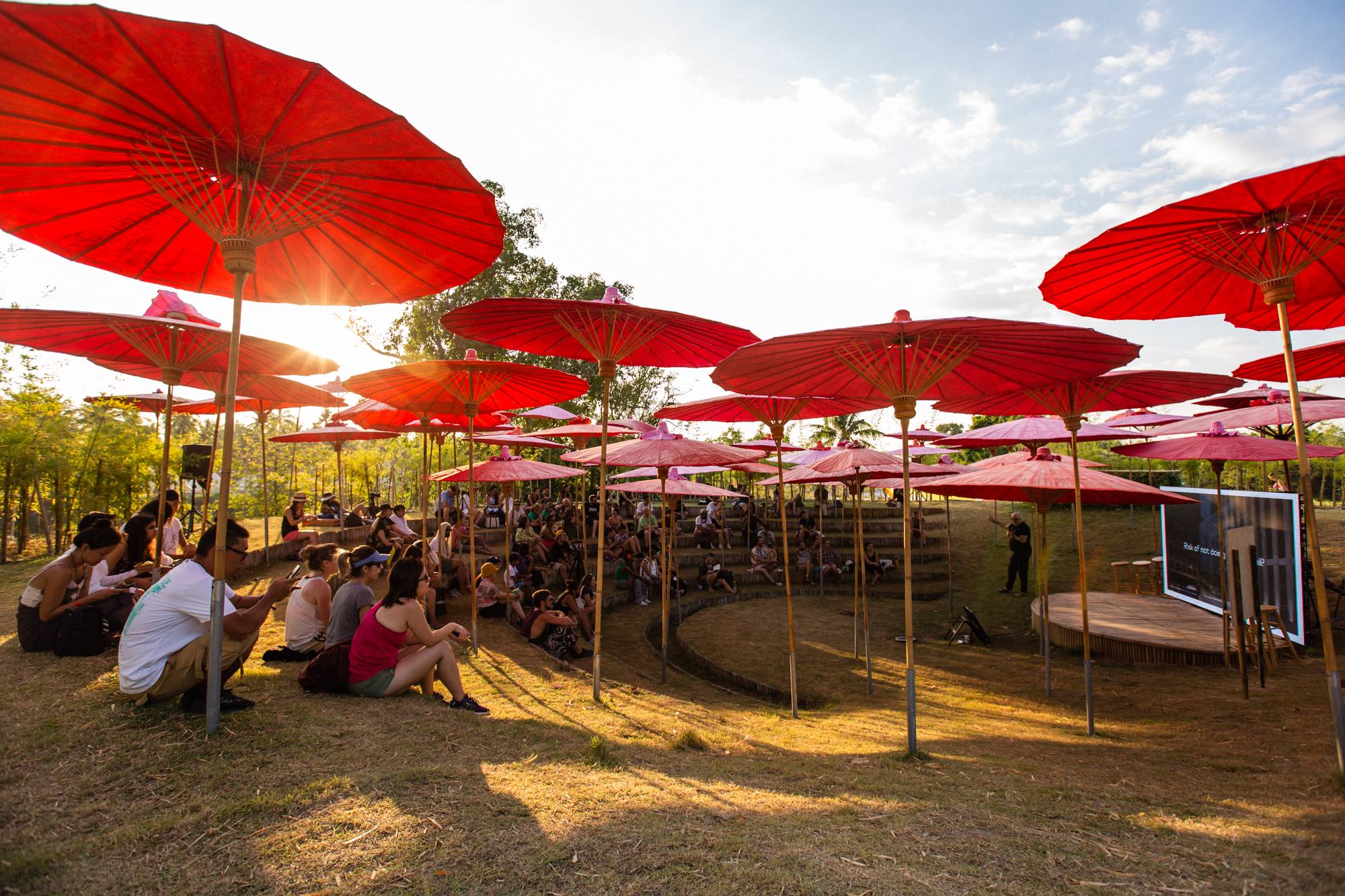 The architecture from Ab Rogers - son of Richard Rogers - is evident throughout with the subtle parasols of the pavillion stage where the - actually worthwhile for once - discussions and panels take place, and the bath houses where you get your Reiki and other treatment fixes. 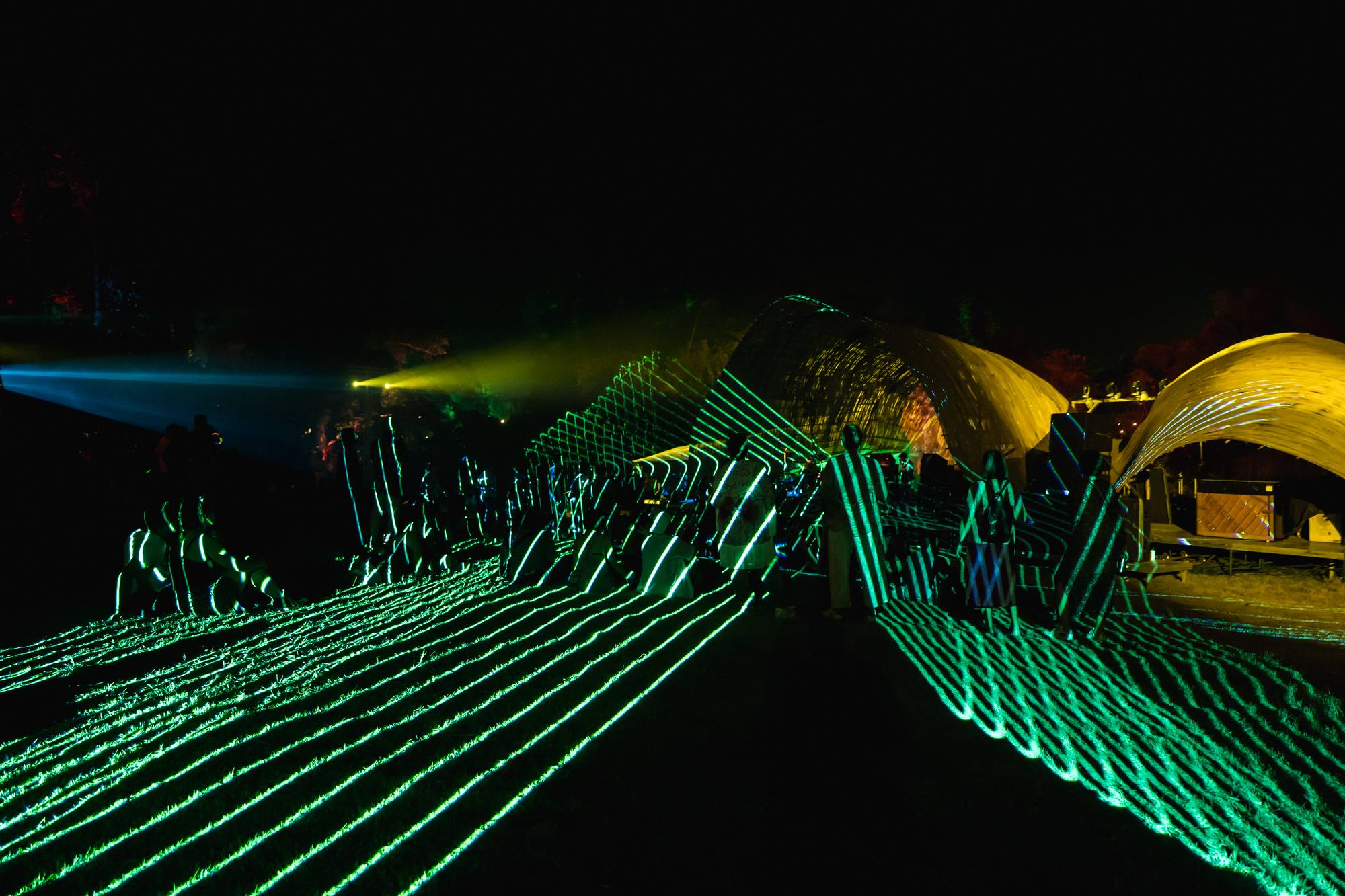 At the beautiful Theatre stage - a bamboo structure inspired by the weaving of Japanese baskets - Erased Tapes takeover the Saturday night where Nick Luscombe showcases the Bangkok edition of his excellent Musicity project. “A site-specific sound/arts practice that invites musicians and recording artists to compose tracks in response to buildings and locations in cities around the world”, tonight Midori Hirano, Rival Consoles, Douglas Dare and Daniel Brand’s music sits amidst the incredible backdrop of the stage… and loads of lasers! 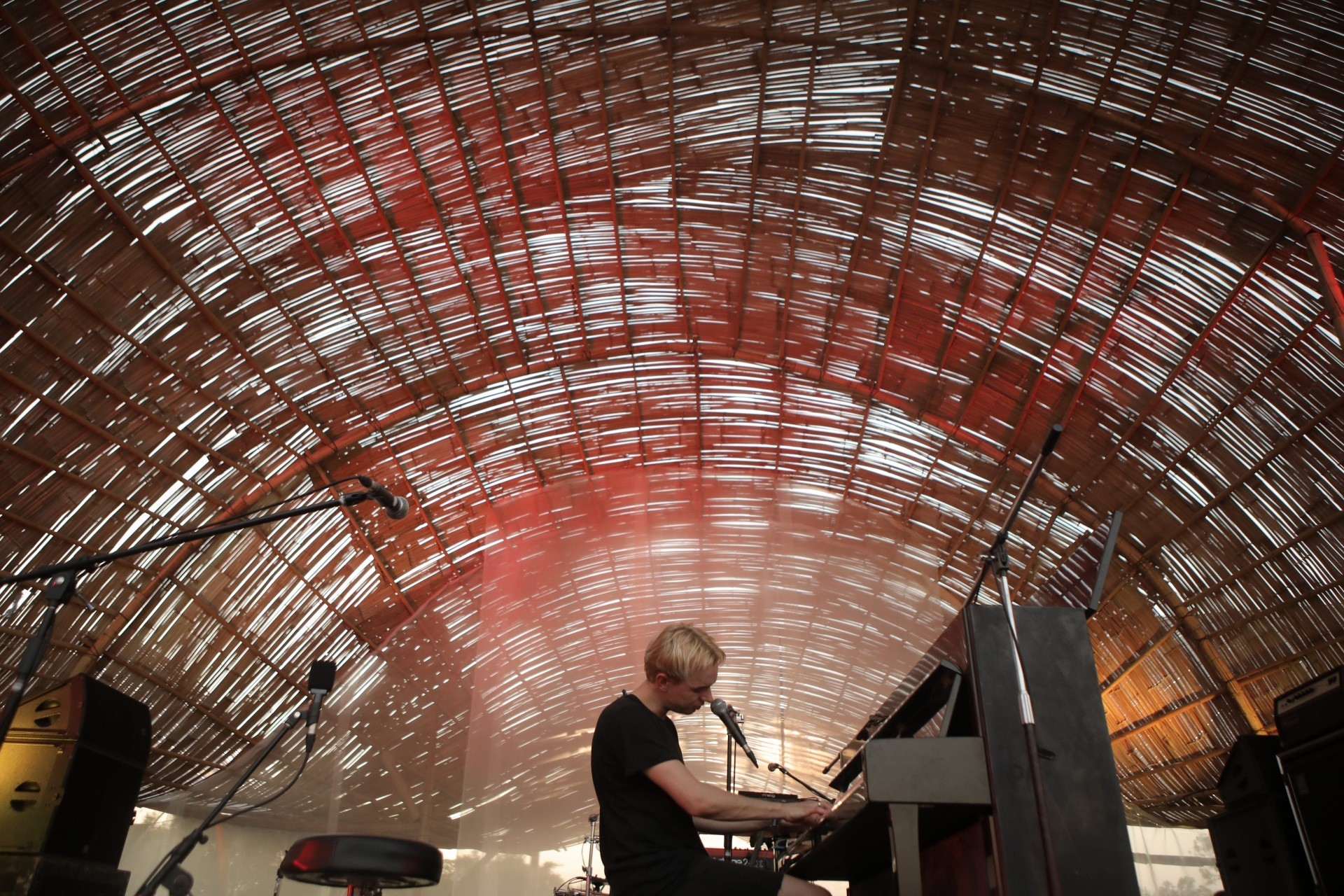 Another venture sideways and we stumble across random lasers in the woods... with loads of smoke… just for the sake of it. The psychedelic edge runs throughout the festival, wrapping you in a blanket and keeping you safe.

Whilst we’re on the subject of blankets, there’s even a place where you can get embalmed.. but just for an hour. 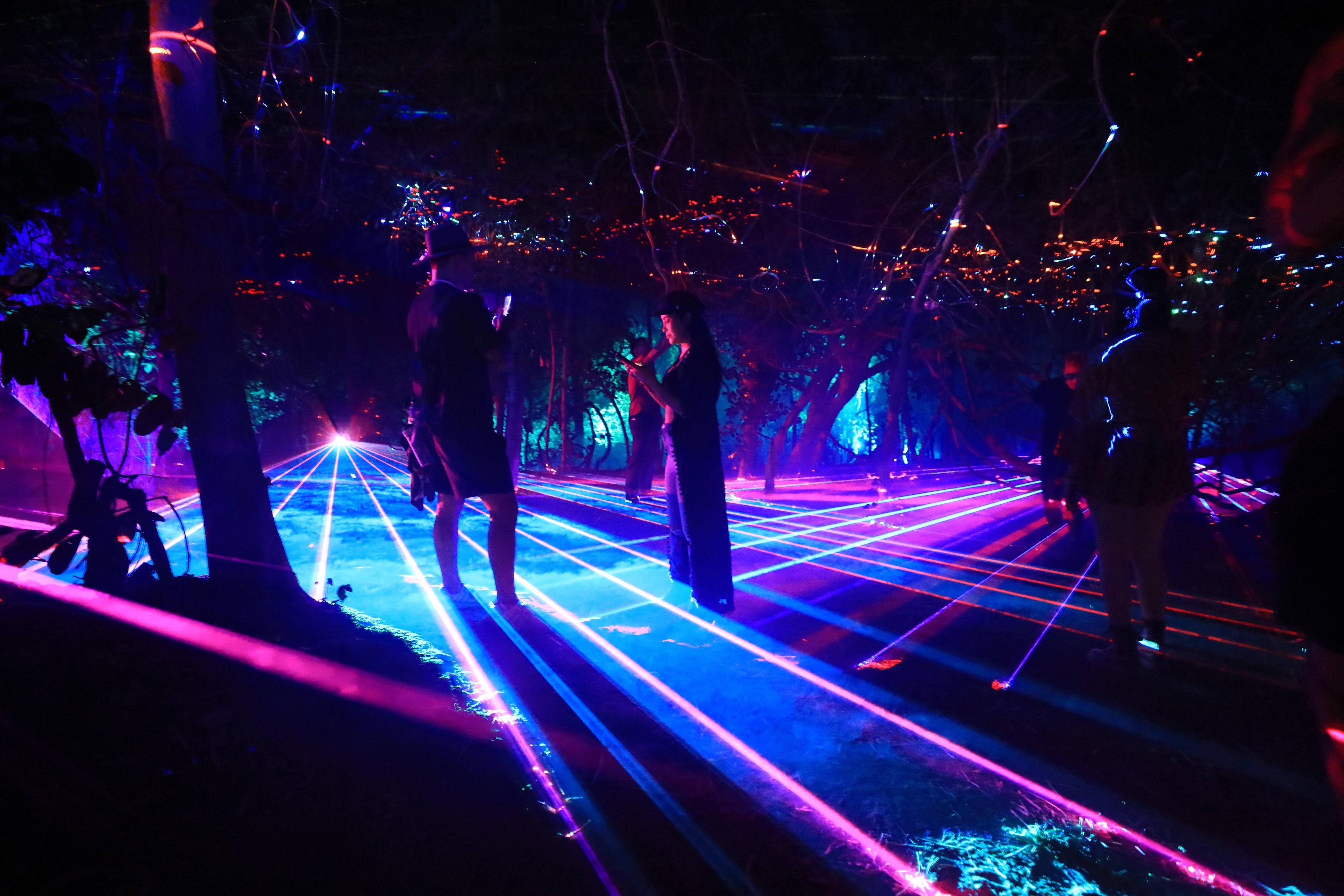 We meet people who’ve ventured from Bangkok - a short drive from the festival - Hong Kong, New York, Shanghai, India and all over. We don’t have the same conversation about Brexit that we’ve been having for the last three years. We feel refreshed. 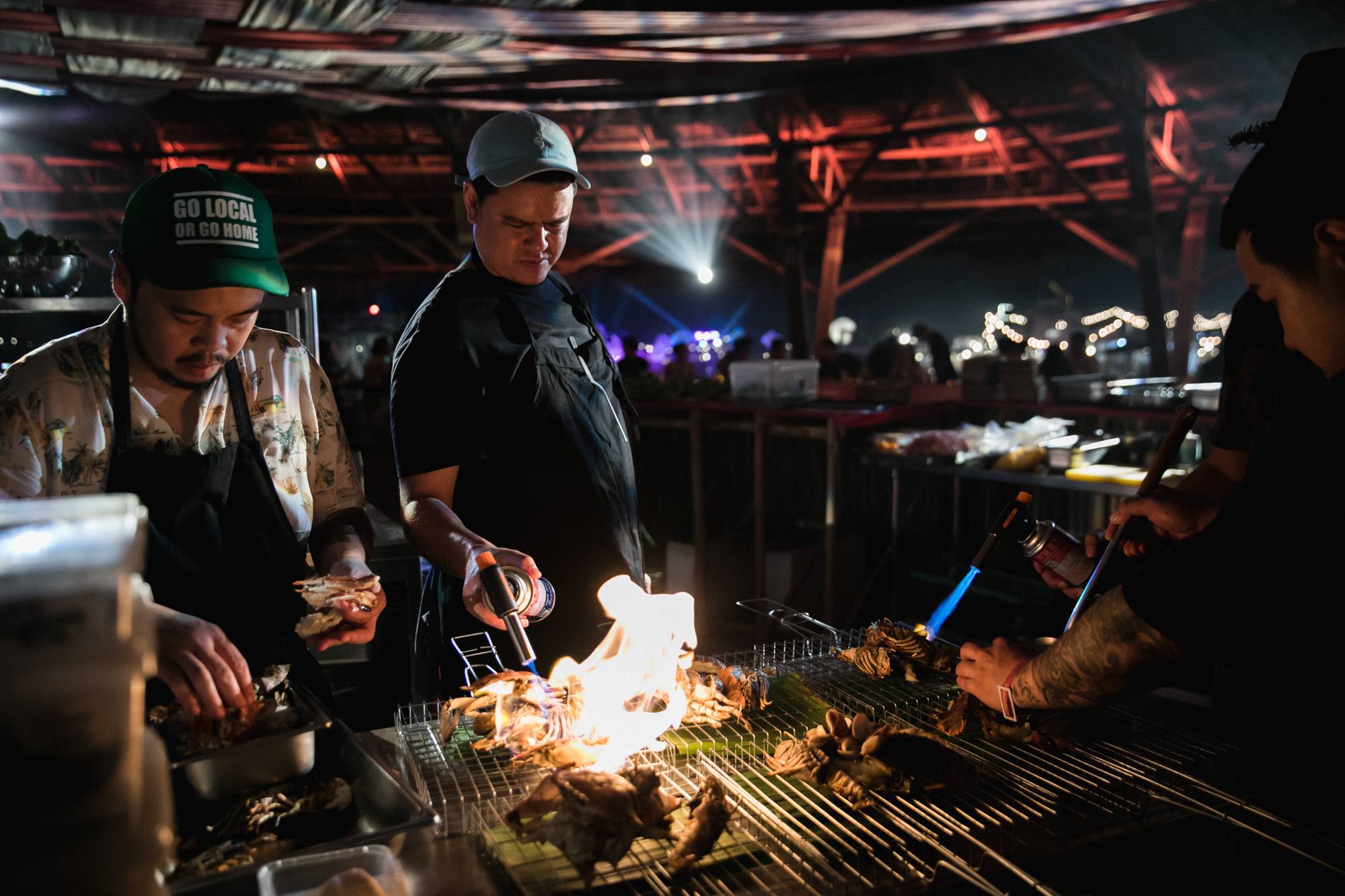 On the Friday night we sit down to an incredible feast of Sustainable Seafood from the 80/20 Bangkok restaurant institution with free flowing local wine at the Theatre of Feasts followed by Colleen ‘Cosmo’ Murphy’s Friday night disco-a-thon and the Go Grrrls’ - underground queer collective from Bangkok - ‘God Save The Queer’ takeover at the Forbidden Fruits stage. Elsewhere we stumble across Kelsey Lu, disregarding the stage and performing in amongst the audience, and various Thai funk bands playing whilst we sit atop the “must get photographed on top of” bus. 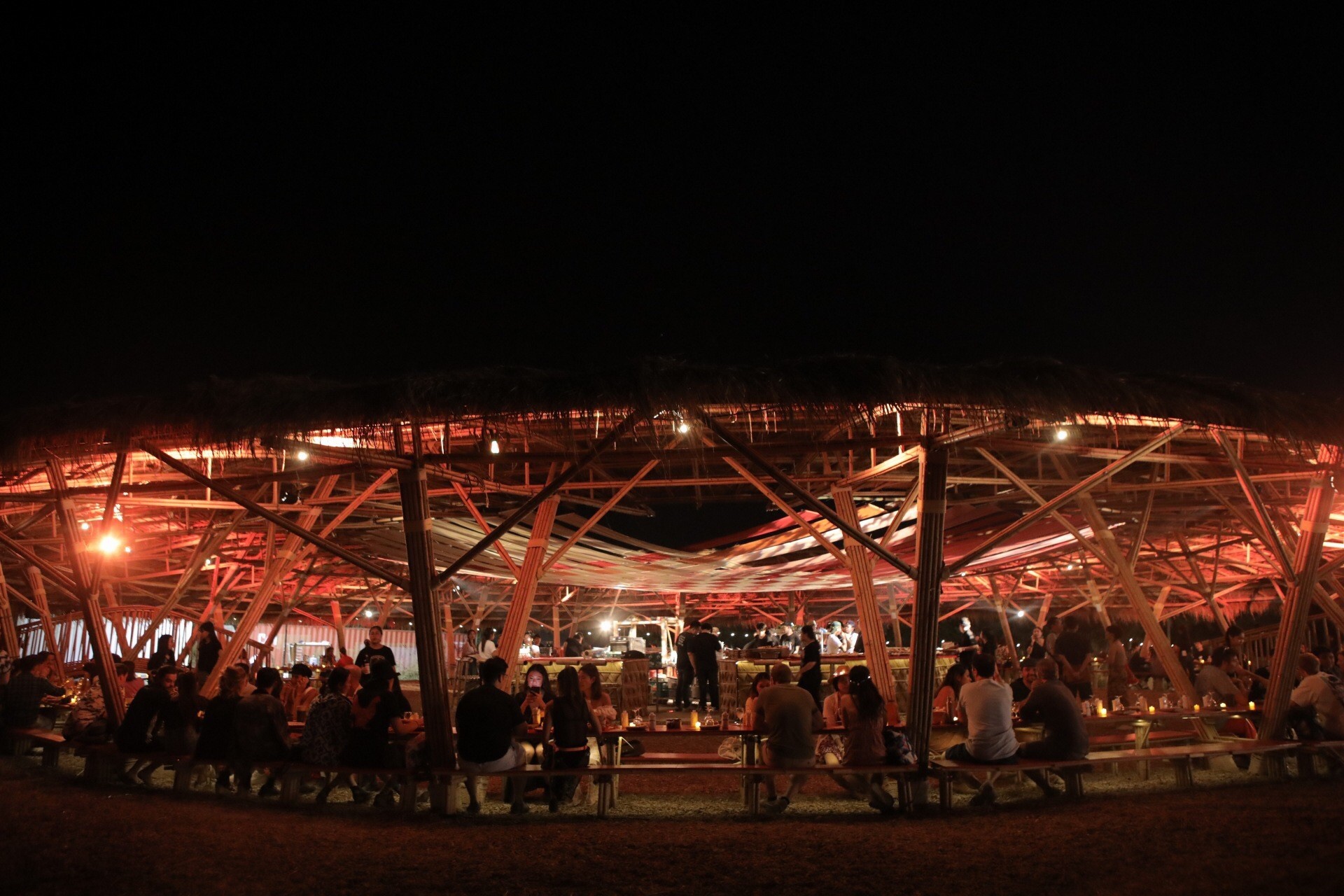 The beauty of this festival is the way it weaves the alternative and the fringe pieces in with the more music led stages: 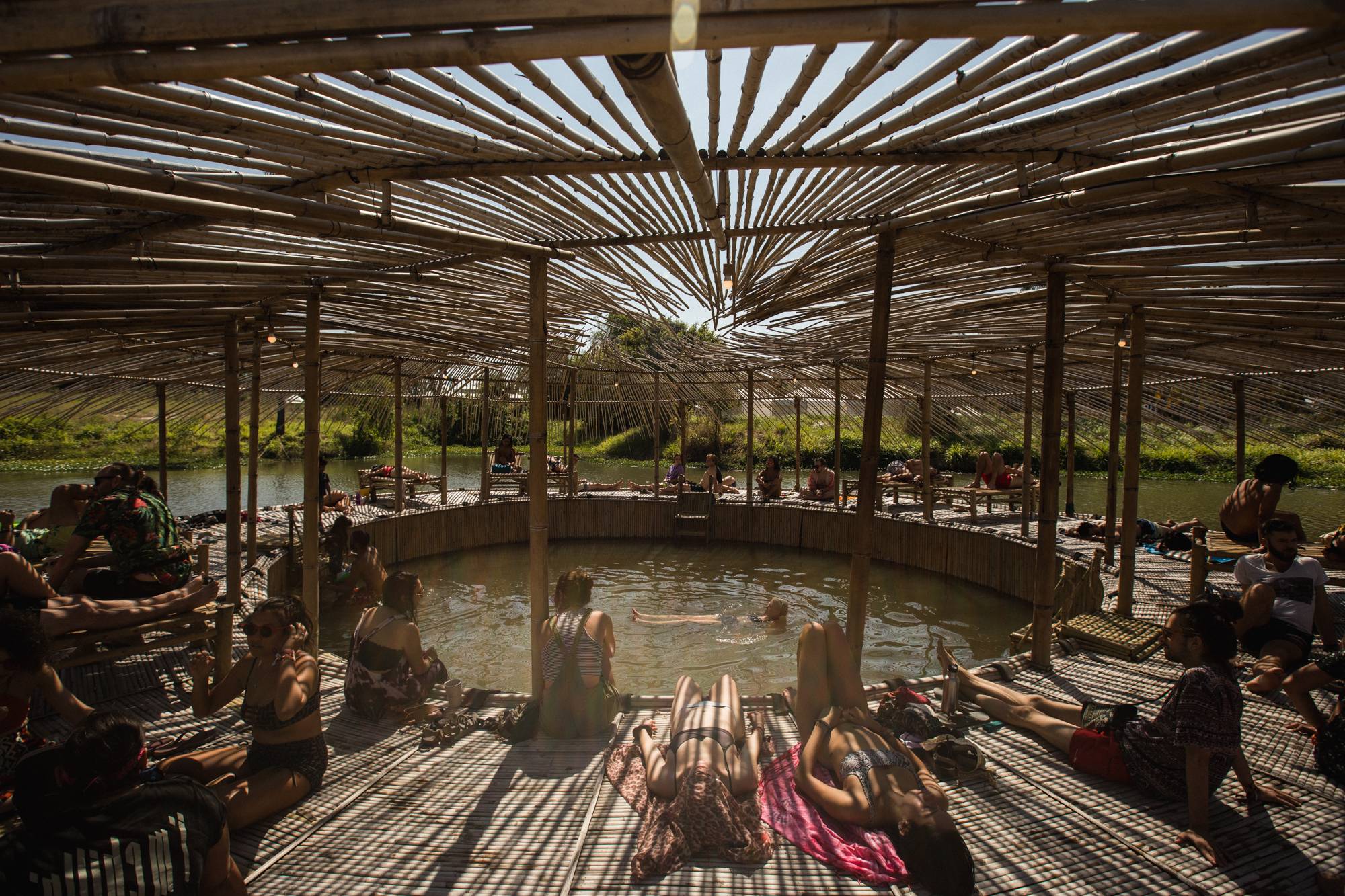 By Thai standards it’s an expensive festival, with tickets starting at just over £100. The food and drinks aren’t cheap either. But to achieve these levels of production and execution also isn’t cheap. If you attempted to stage something like this in the UK, the US or elsewhere in the ‘west’ you’d be commanding a crazy ticket price for it, so by that rationale it’s actually a bargain. It’d be interesting however to see it opened up to a wider local demographic. 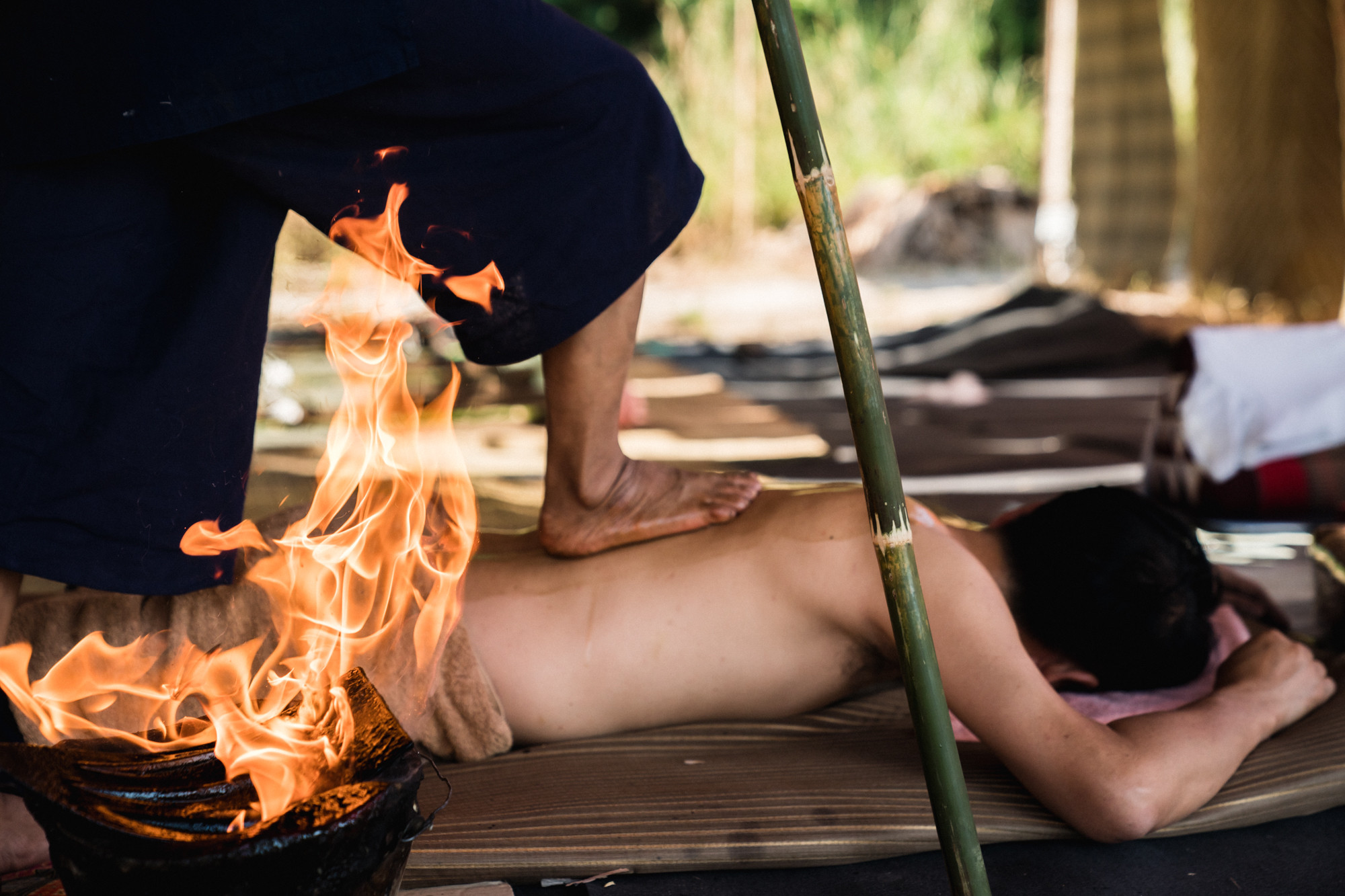 What would we change? Very little really. Perhaps a completely ambient area, free from any 4/4 at all - perhaps Simon Heijdens’ Silent Room installation could be expanded to cater to that side of things too next year. And definitely more vegetarian and vegan food options, given the message they are pushing of a sustainable future. 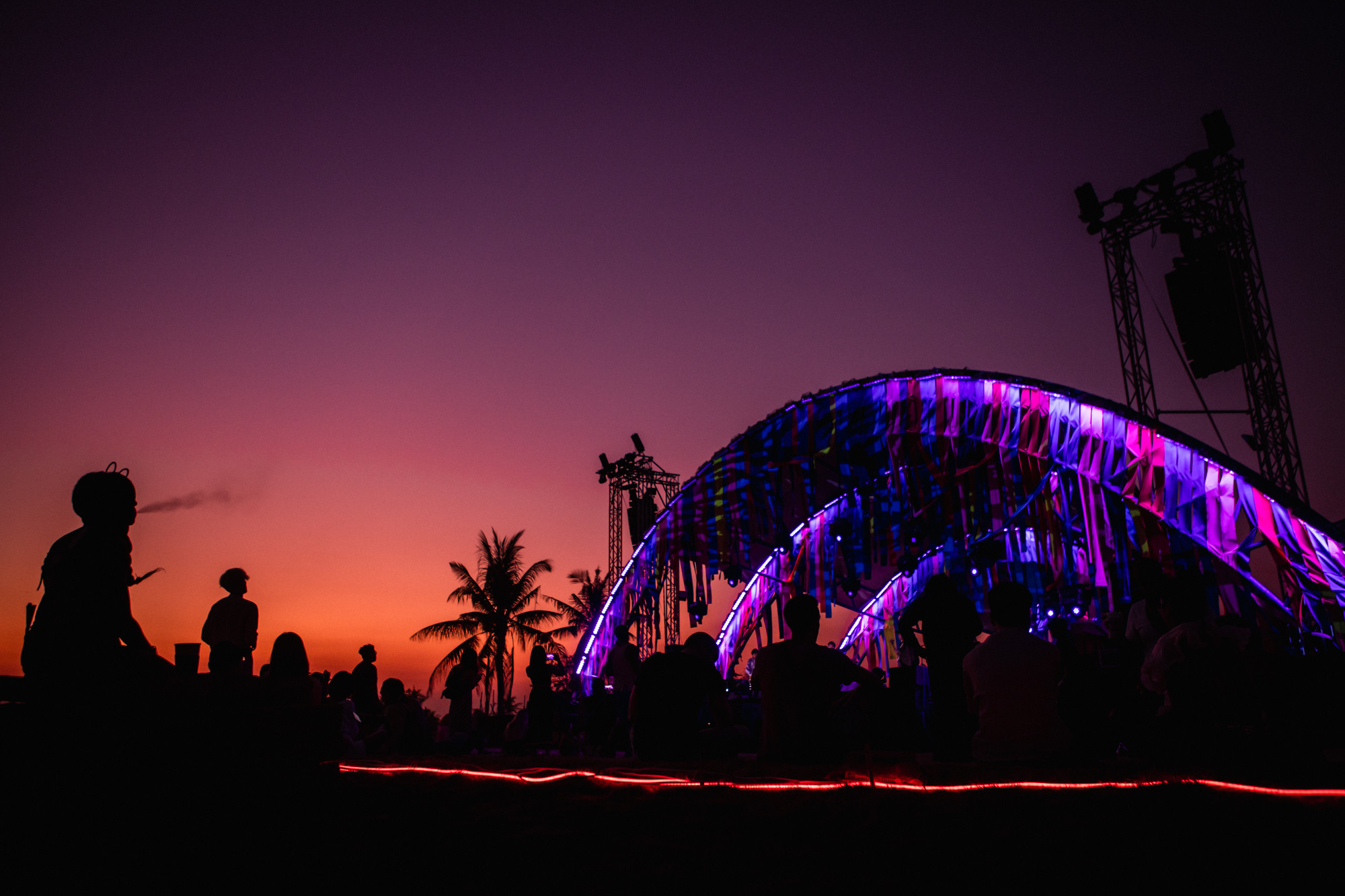 Forget the outdated Alex Garland perceptions of Thailand, caught in a neo-colonialist gap-year bubble, this is Thailand reimagined as the cultural hub of Southeast Asia. A perfect escape from the impending onset of winter and a precursor to the overblown excesses of the ‘festive season’. Do yourself a favour and book an early flight there next year. Or better still, work out how to get there by train.

I can honestly say from a jaded old festival bore whose parents took him to Glastonbury from the age of 1 that this is one of the greatest four day field experiences of my 42 years on this curious planet. “As we build the world we want to see, we can demonstrate the power of human connection and the impact it can have” says Wonderfruit founder, Pranitan “Pete” Phornprapha, which out of context sounds like the sort of passing comment that only someone who isn’t worried about where their next meal is coming from would say. But having experienced the weekend and dug deeper into the soul of the festival you quickly feel like you’ve had an epiphany of “Jesus this is how all festivals should be conceived and executed”. And how we can all be just that bit nicer to each other.

Find out more about Wonderfruit.

The 6 Figure Gang member recalibrates her musical direction, dropping the mask and the 'U' in the process.

Review: Kahn and Neek - (Having A Sick Time) In The Mansions Of Bliss

The Bristol duo's first musical collaboration since 2016 captures the last 10 years of progression and complexity in bass music...

A deep dive into the UK’s avant-garde and experimental scene between '76 and '84...