Gone To A Rave #27: The Prodigy
Minute Read 'This piece was originally published in January 2015…"

Last month I interviewed The Prodigy for The Guardian….

As with all newspaper features, I had to condense two hours of chat into a narrative that would make as much sense to a student in South London as it would to a retired teacher in Hull. As is the nature of these things, I had to chose what to prioritise and what to leave out. The thing is, I was there to talk to the band about their latest album, which was cool, but I also really wanted to talk about 'Experience', 'Jilted Generation 'and the early 90s rave scene.

I knew the Guardian weren’t gonna be that interested in me turning in a piece where The Prodge sat there reminiscing about Orbital raves, so after I’d spoken at length about the new project (which you can read about here) I slipped in some questions for Gone To A Rave – and here you have them. Here’s the band, Liam, Keith and Maxim, chatting about the early days of warehouse raves, playing in Labyrinth, listening to hip hop, and whether Mr C is a prick or not.

Liam: Essex has changed though – the Essex you see on TV is vastly different to the Essex we grew up with. Most of it wasn’t there, I see it and I’m like, where the fuck is this?

Maxim: It’s not real Essex is it, they just pin point certain areas.

So you’re not a fan of TOWIE then?

L: I haven’t seen it

L: Those things with the long hair and the skirts, I don’t know what they are? I just don’t get it. Are they women?

M: There’s a whole generation of things out there that I just don’t get…

L: To give Essex it’s due, the whole rave scene was generated in – the shit we were into  – all from Essex into East London, through us, through the whole A13 area, Raindance, Telepathy, that was the shit right there –that’s what built The Prodigy, that’s the roots of the band. And when you see the cover of the album, you’ll see little references inside to Essex, we’re proud, this is the old skool Essex. We’re linked to nearly all the scenes in some way, shape or form. But we were from the proper rave scene. When we started we were all into different stuff, but I was into the Beastie Boys and The Specials, they’re all bands that carved their own sound – when you put on a Beastie Boys track, you know it’s them within 10 seconds – and I always hoped we’d get to that position. And we have now. When someone puts one of our records on, they know it’s us.

Is it true you had your first gig in Labyrinth?

K: The greatest thing about doing Labyrinth, was we turned up for our first gig, which was the start of the band in my eyes, and I said to Joe who ran it, “Joe who else has played here?” And I’m thinking, grimey old club, Zepplin, The Pistols, it must have all started here, and he said, ‘well we did have a band once, and they got bottled off stage so we stopped having em.’ That was our first gig. That’s why I don’t get nervous. From that moment, he put us on the Friday, then he booked us for the Saturday next week. Then after that Friday and that Saturday we didn’t stop working.

Do you think if the old bill and the government had been a bit more amenable to the rave scene you might not be such oppositional people?

L: Everything that was meant to be was meant to be. It was fine, it was great. I like the fact that people still don’t know totally what we’re all about. There’s still stuff to learn about us. Anger is an energy and has always referred to us, on a real basic level. That’s what I keep trying to tell people, the Prodigy represent people who wanna go, fuck you, we’re doing our thing, leave us the fuck alone.

M: Prodigy fans understand that. I grew up round the punk scene, itr was rebellious, but people attached a political agenda to it, with the band, there isn’t that, it’s the energy

But I can’t help thinking that when I look at Jilted Generation, and that picture inside, that’s a clear political statement, a clear fuck you to authority…

L: That’s just a statement you have to make, that’s just the life we’ve always led.

M: If you’re in a field enjoying yourself and someone wants to shut you down, you’re gonna say, fuck don’t let em shut us down.

L: I was terrible at school, I was good at art, I got into graffiti and got in trouble with the police, d’y’know what I mean – from day one I wasn’t a criminal, I wasn’t going out mugging people, but that’s what I was about. And the same with all of us, we’re not hoodlums, but it’s ingrained.

K: We have a distain for authority. You can’t tell us what to do. We’re the sort of people who can’t be told. We can’t even tell each other what to do. 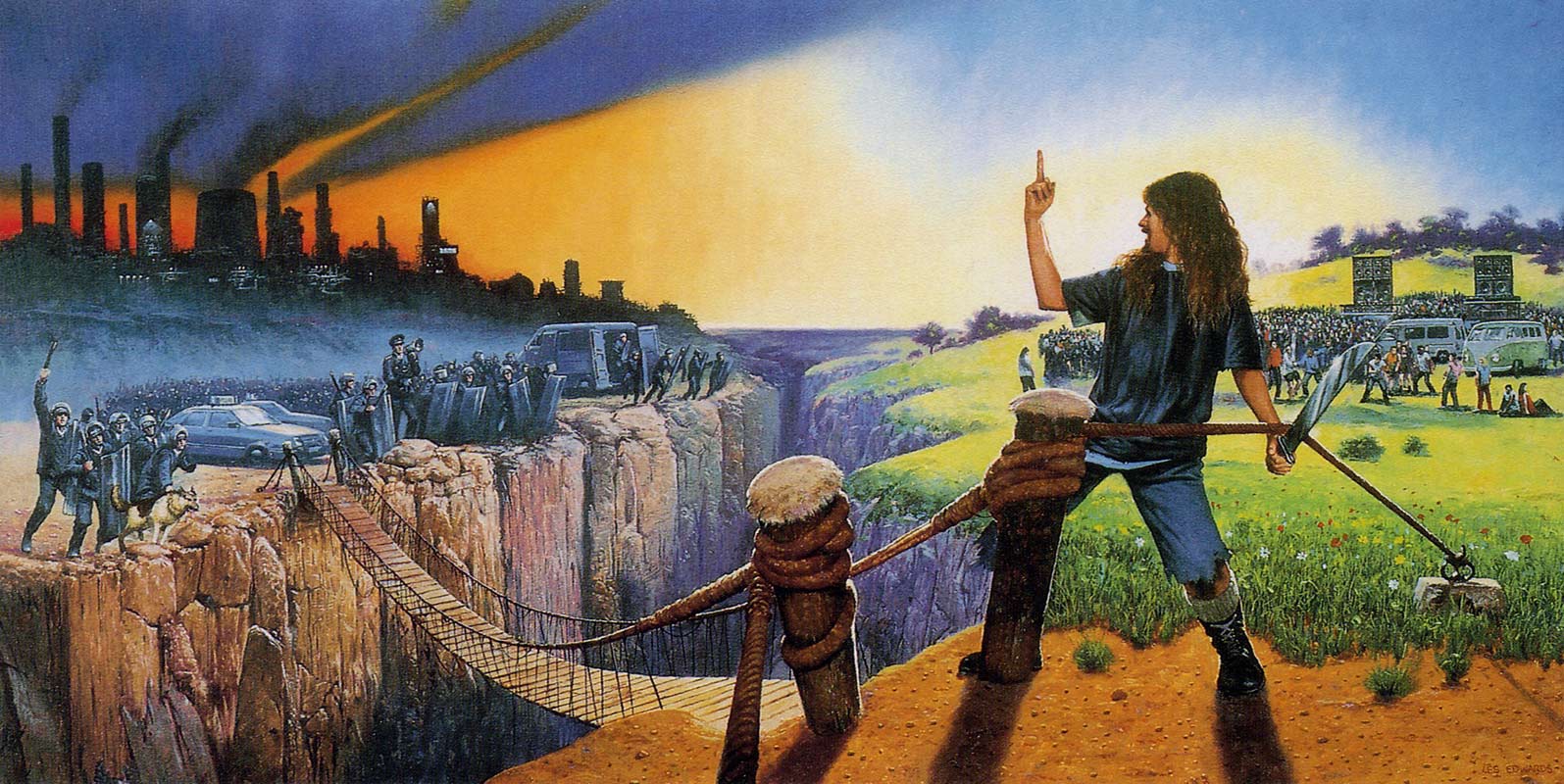 Do you think going back and revisitng the old stuff for the reissues influenced what your doing now?

L: Yeah, well playing it live we listen to those tracks every week still – the most frustrating thing when you hear a band coming out with a new record, is when they try to go in some new direction and forgot where they come from – every band if they’re sensible, should take what’s good about themselves and write better songs. We’ve worked hard to carve our sound, and it’s a little bit in my mind when I write these songs, it’s gotta to have that attack – its interesting when we think about where we come from.

K: A DJ came up to us in our first year…

K: Gave us a patronising pat on the back, and said, if you get a year out of it, then enjoy that year. Well… (Keith holds his arms out to indicate how much further they've come, and the other two crack up at this)

K: He was the bollocks.

L: we used to go down the Barn in Essex in 89, and he used to DJ and get on the mic and rap, and I was from hip hop, and I was like, who’s this fucking cunt on the decks, what’s he doing? And then I got into it, I was like actually I kinda like it..

How important were XL Records to you in the early days?

K: They were key. Look at what Richard Russell has done. We had our own destiny in our own hands but he was key in recognising the beauty of who you are is who you are, and that’s what I want. He didn’t want to change it, he wanted to enhance it – he wanted to be a part of something that was special, and that was the number one part of what we were.

L: Basically I was DJ'ing, and I was flicking through my record collection, and I thought, yeah I wanna be on XL – Looney Tunes, Moody Boys, it was stuff with a bit of a groover, a beat, not Belgian shit, it had a vibe about it, it was always the right label for us. But we’ve always been up against any label. It took them quite a while for them to realise what we’re about.

M: It's hard for anyone to understand what we’re about. It’s about us three, we’ve built this over 23 years.

K: People walk into our environment and we control it. We’ve always been so Teflon that people can’t keep sticking their bits of shit on us.

K: What people don’t understand is that there’s a lot of free thinking people out there that wanna do exciting things and wanna break the mould. But that goes back to what Liam was saying about where we come from back in the day. Coming from a scene that was about breaking into warehouses, y’know, 30-40 cars driving to a barn in Cambridge, cutting the lock, opening the barn, putting your soundsystem in and partying til the old bill come. But we’re not King Knut, we can’t send the tide back. It goes back to the ethic, that ethic we had as DJ's, MC's, a nutty raver, that ethic is in us.

Liam gets his phone out and puts on a video of some shufflers, showing the rest of the band, loving it

L: See this is more related to hip hop… Leeroy was the king shuffler! It’s all about bassline music, when I was going out rare groove was happening and Soul 2 Soul was happening, it was usually house parties, and you’d hear Fight The Power next to James Brown

M: I was in that scene, Soul 2 Soul playing at the Africa centre, the acid scene I wasn’t really into, but seeing Public Enemy as Rock City just blew me away.

M: The energy in the music, I relate to it so much.

Do you think you’ve got more in common with hip hop than acid house?

L: Yeah, yeah, when I came into it I was into hip hop, and it was the transition from that to the rave scene was 5 or 6 bpm, when we started going out, Shut Up & Dance and the break beat rave scene was just starting and we were right there, Blapps Possee, Shut Up & Dance, they were all from the hip hop scene. There was house back in the day, but you could see lots of different types of sound, now it seems very cliquey, like everyones into house now..

M: House back in the day, the Detroit sound, it had something organic about it, it had an energy…