The streams will take place in Leeds, Manchester, Bristol, London and Berlin, with all money raised going to Meningitis Now.

The streams will take place in Leeds, Manchester, Bristol, London and Berlin, with all money raised going to Meningitis Now.

Over 80 DJs have been announced to play a run of seven streams over seven days in memory of DJ, On Rotation co-founder and Tribe Records staff member Alex T, who sadly passed away from bacterial meningitis last January.

Taking place between Monday 19th to Sunday 25th April, the streams will be broadcasting from Leeds, Manchester, Bristol, Berlin and London, with a target of £5,000 set to raise money for Meningitis Now.

Curated by Alex's brother Seb AKA DJ and radio host Bugs Groove, in partnership with collectives, parties and venues across the five cities, the stream will feature DJ sets from the likes of Bruce, Yushh, Perception, Iration Steppas, LUXE, Tañ and more across the week.

This string of events follow last summer's first round of DJ streams—hosted in Leeds, Manchester and London—which raised over £11,500 for Meningitis Now.

A message from Seb on the Facebook event reads: "Just over a year passed since we lost my brother Alex T. He was an inspiration to many, including myself; a true DJ's DJ, a gifted radio host, the kind of friendly, genuine music enthusiast you want to meet behind the till of a record shop, a promoter who relentlessly pushed interesting artists and DJs, shining a light on the talents of his friends and those deserving to be given the spotlight, always considering ways in which he could use his platform to fight inequality.

Whether it was sinking a Bloody Mary with him at Outlaws, lounging around and dancing with him at the Castle Party, watching the sun rise with him on the beach after a long night in the fort at Dimensions, wafting with him on a dancefloor, taking a handful of his packet of Snyders, mixing with him at an afters, or simply just being in his presence: he touched us all.

It's with all this in mind that I've put together, with the help of some friends, this second series of live streams as a tribute to him. The aim is to bring us all together online for a final time, primarily to celebrate DJs and collectives who knew and mattered to Alex."

Full line up below... 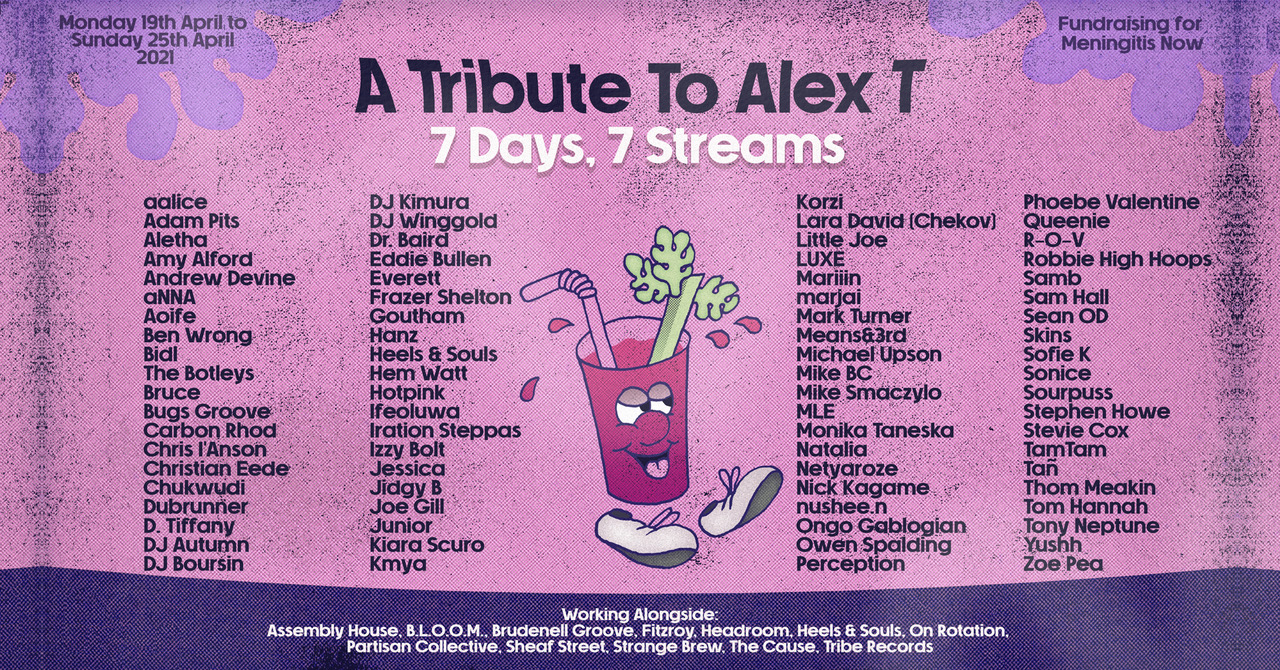 Find out more about the streams on the Facebook event. Donate directly to Meningitis Now HERE.

The release features music from Xinobi, VIL, Kaspar and many more.

The French label, run by The Hacker, have gained a cult reputation over the last 10 years.

The free platform presented by in-school music education scheme FutureDJs will be open to under 18s across the UK.

The stations seek to reimagine the role of independent online radio, helping to support the fragile counterculture ecosystem and the survival of underground artists.

Launched by DJ and journalist Niamh O'Connor, the book highlights global scenes within dance music, sharing stories from over 50 artists across the world.