Le Guess Who? reveal full line up for 2019 edition

New additions include the premiere of Patrick Higgins and Nicolas Jaar's AEAEA project and Hidden Musics, an exploration of global music traditions...

Le Guess Who? reveal full line up for 2019 edition

New additions include the premiere of Patrick Higgins and Nicolas Jaar's AEAEA project and Hidden Musics, an exploration of global music traditions...

Utrecht-based festival Le Guess Who? have announced the full line up for the 13th edition, taking place between 7-10 November.

The first addition is the premiere of AEAEA, the new project of composers and performers Patrick Higgins and Nicolas Jaar. Through instrumental performance and live digital resampling the duo will seek to create immersive musical environments that redevelop against and react to the live compositions. By using computer processes to resample and reprocess eachother's instruments in real time, the pair with unfold a new vision of electro-acoustic experimentation.

Another first for the festival comes in the form of a new program called Hidden Musics, which sees producer Ian Brennan and Glitterbeat Records founder Chris Eckman present global music traditions from remote parts of the world, with little to not Western influence and a rich musical history. As part of the program, performances include all-female Greek vocal emsemble Isokratisses, Pakistan's Ustad Saami who is the last living khayál master, and Mexican act La Bruja de Texcoco who fuse Mexican music, baroque and jazz.

The full line-up including existing acts such as Deerhunter, Holly Hernon and Vladimir Ivkovic, as well as curated programs led by Fatoumata Diawara, Moon Duo, Patrick Higgins, the Bug and Iris van Herpen and Salvador Breed can be found on Le Guess Who?'s website. 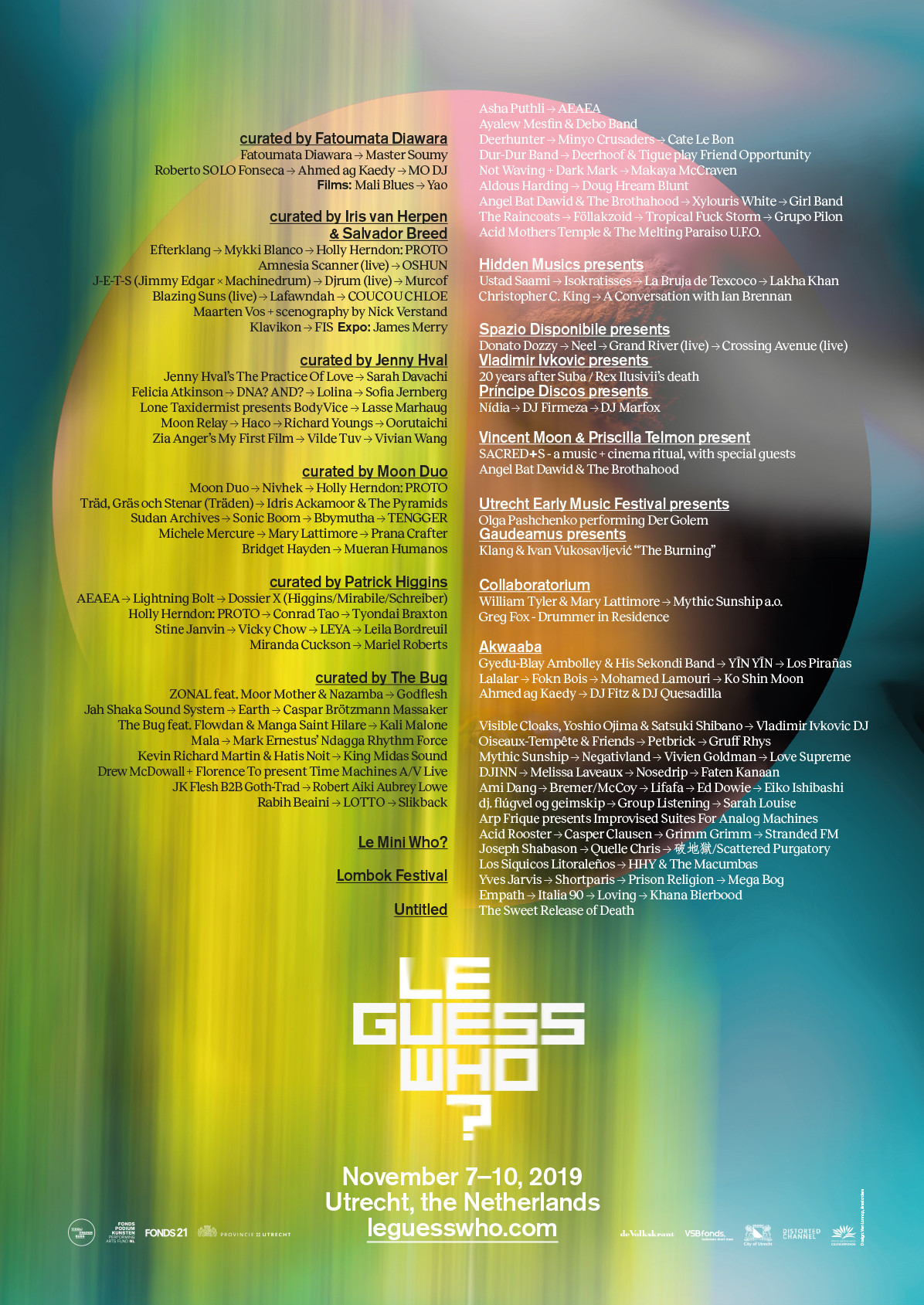 Originally released on Night Vision in 94.

Following the release of his debut EP on the label in 2019 the Kampala based musician suffered a stroke at the age of 27.

The album was produced by renowned keyboard programmer and synthesizer guru Hideki Matsutake who has worked alongside the likes of Isao Tomita, Ryuichi Sakamoto and the Yellow Magic Orchestra.

The record is forthcoming on Reward System and comes off the back of a recent string of releases for the likes of R&S Records, Exalt and his own FBA Recordings label.

The interdisciplinary festival also moved their events to their website, hosting DJ sets, workshops and audio-visual works from Dopplereffekt, Anastasia Kristensen, Nazira and more across the weekend.