Will Lister: The ‘Shine A Light On’ Mix
Minute Read

Will Lister: The ‘Shine A Light On’ Mix Here is a familiar face for the London crew… Will Lister is slowly but steadily amassing a reputation as a bit of a production mogul with his jazzy, luxurious take on house which has been featured on the likes of Phonica Records, Joy In Repetition and most recently on a new split EP on ANMA Records. His sound sees him blend jazzy excursions with club focused production which sits somewhere between the intricate sounds emerging from Peckham at the present and the full scale orchestration of Floating Points. Packed with musicality he appears to be a rising talent and a man very much in demand. One to watch in the coming years.

We invited him to contribute to our 'shine a light on' mix series and he has delivered in fine style. He will also be appearing at Farr Festival this summer so keep your eyes peeled.

This pic on my phone of some cool looking smoke at an empty Corsica, feels like it might be an okay way to describe what I make. I’m awful at describing it using words so i’m glad I get to use a picture. 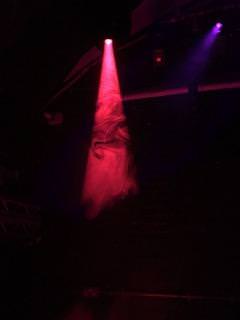 Shout to David at the Docks Studios in Dalston for letting me record mixes there.

Interesting question.. whatever you’re comfortable in.

Turntables, CDJs and a mixer, anything other than that is a luxury seeing as most of the time I do recorded mixes I spend more time trying to find a spot to record in than actually recording it.

Most of the time I record a mix they end up being quite varied so i'll have different favourites for different reasons. But that Stereo People track is just super cleanly made with some lovely sounding drums and bass. Really simple but effective, been listening to that a lot recently.

All the Dubious Doobies shows on Balamii! I listen to them religiously. I don’t think I have a favourite because they’re all dope but they’re really worth checking out.

Nicky Soft Touch, which is actually really fortunate because we’re playing at the Love Inn together in Bristol on the 17th May.

My first set up was a pair of borrowed turntables back in Lyme Regis, plus a Mixtrack Pro. I’ve since lost the mix track pro and can’t afford 2 turntables right now so just have one and an aux cable.

For a recorded mix probably the first track but I hope people listen past that in mine cos the last is very different to the first.

Can’t remember exactly but think it might have been T2 – Heartbroken and Sicko Cell by Joy O which I traded for a pair of shoes when I was like 15. Best trade i’ve ever done. Last record I bought was that Stereo People one for this mix.

The last track in this mix is actually pretty weird to mix because of it’s structure so I usually have to mix it in pretty quick and messy, but i’ve been playing it a lot recently so I try and make it work. Flawless mixing isn’t that important to me, as long as the tunes are good and the vibe is right people can mix how they want.

The record on ANMA with Trinidadian Deep is out now to buy from most shops, digital is coming out on the 15th. We’re having a release party for it at Behind This Wall in Hackney on Sunday 13th where myself, Rosie from Kiara Scuro and Sean OD will be playing plus others. I’m playing at Pickle Factory with Matthew Herbert end of May, and Love Inn with Nicky Soft Touch just beforehand too. Other than that just more studio time, I haven’t been able to write loads recently because of uni and working on a live show but i’m back on it for the summer.

The live stuff is actually coming which is both terrifying and exciting. I’m joined by Nicolas Robillard (HNRO) on bass, Max Winter on keys and Jon Ward on drums. They are all amazing musicians helping me to realise this music i’ve written and we’re looking to debut it in a couple of months or so. And with Dance For Refuge we’ve been working on some really exciting events for this year including another at the V&A and Five Miles, so keep your eyes peeled for all of that..