A label showcase from a talented dj and the Voluminous arts founder.

Gavilán Rayna Russom remains one of the most pivotal figures in experimental, electronic and underground music culture. She has come a long way from the glory days of LCD Soundsystem having firmly established her own identity and musical trajectory having since gone on to release material on the likes of LIES Records, Lux Rec and Ecstatic amongst others.

However, arguably her greatest achievement and success has come in the form of her own record label Voluminous Arts upon which she has released a wealth of her own material which focusses on an alternative, boundary pushing pathway towards future discovery and expression. It is here in which she is free to do as she pleases and focus her own creative perspectives. Earlier this year she released an album under the guise of Black Meteoric Star and there’s plenty more to come.

In celebration of this we asked Rayna to record a mixtape which showcases the nature of the imprint, a chance for her to display the music she has released and offer insight into what might come next.

I’m an interdisciplinary artist and composer, a medium, a witch, a deck player and the founder and creative director of Voluminous Arts; a record label and creative support network for disseminating works by boundary pushing artists.  I am in a highly contested and temporary settler colonial entity called Queens, New York City on Canarsie and Munsee Lenape land.

The stealthy but permanent dismantling of oppressive structures.

Can you draw what you think it sounds like for us (an image from the internet is acceptable)? 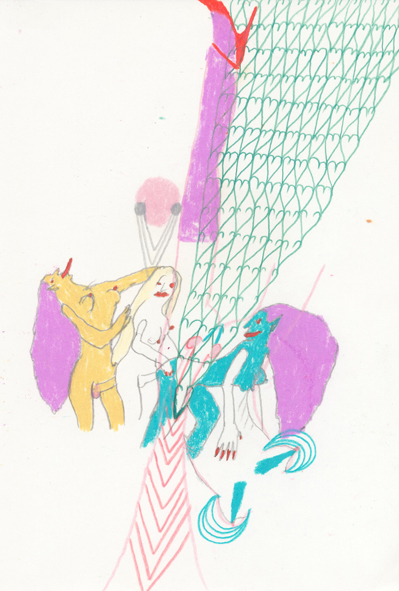 In my home.  My DJ set up is in the same room as my ancestor altar.  There are three drawings I made about cosmetics and witches in 2004 hanging above my turntables and mixer.

“And thus shall it be done: all shall sit down to the supper all naked… and, the feast over, they shall dance, sing, make music, and then love in the darkness, with all the lights extinguished; for it is the Spirit of Diana who extinguishes them, and so they will dance and make music in her praise” – Maddalenda, as quoted by Charles Godfrey Leland in Aradia: Gospel of the Witches

I’ve had pretty good experiences DJ’ing at sex/play parties but never was able to record those mixes.  That could be pretty great.  Also I think the forest would be lovely.  And maybe in a cemetery would be the dreamiest of dream settings.

I don’t like to play favorites but all the unreleased material is really exciting for sure.  Can’t wait to put it all out.

There’s a Lil Louis one from Sept 25, 1992.  He’s playing at the Hacienda in Manchester and he puts together a whole lead-in skit where two women are talking about how they’re going to see him play and can get on the guest list, which he segues seamlessly into that opening “There is no guest list tonight” section of “Club Lonely”.  That is pure genius.  And the Ron Hardy mix from June of 1984 where he blends out of “When Doves Cry” into “Waiting on My Angel”.  “When Doves Cry” came out on May 16th of 1984 so it was brand new and a massive hit.  “Waiting on My Angel” wouldn’t even come out until a year later, so it was a deeply underground cut.  He blends them beautifully by tuning into some very deep connections between how the two tracks are harmonically, timbrally and rhythmically structured.  All the Ron recordings are stone cold brilliant but that one has always been really special to me.

I think me and Bert Lockett might have a lot of fun, if we’re talking historical.  Nobody really DJs like me so back to back is always a tough one.  It’s fun sometimes but I can never really do what I do, because what I do when I DJ is about very long time and energy arcs.

The very first things I did with DJ’ing were using my parents’ old home stereo equipment.  So like scratching on a home stereo turntable, and even “scratching” with reel-ro-reel tape!  And making loops using a double cassette deck; pausing the recording deck at the exactly right time to make the loop sync.  That was when I was like 14, then when I was 16 I spent all the money I had saved up on two Gemini XLBD10 belt drive pitchable “DJ” turntables and an ATUS mixer which was my first let’s say “real” DJ setup.  Now I use two Technics 1200 MKII’s that I bought used from a hip hop DJ in the Bronx about 12 years ago, a single Pioneer XDJ, an Allen & Heath Xone 62 mixer (the only one of theirs I like) and then my laptop for playback as well sometimes.  I record onto a Tascam DR-40 and mix the room mic and direct recordings.

The relationship between them.

I think the first record I bought for myself was a 45 of Karma Chameleon when that came out.  According to Bandcamp the last 4 things I bought are: Sunk Heaven – The Fvckhearted Lvng, Frankie Consent – No Memory Foam, Abbinory – Introspect and Gyna Bootleg – Blind.  Couldn’t pick just one 😉

Is there an animal that represents creative work that is extremely rich and powerful but painfully under-appreciated?  And maybe also represents the end of capitalism?  It’s that one.  Maybe a feral cat is what I’m thinking of, I don’t know.  I love animals but this is a weird question.  I guess there’s no way it could just be one animal.

There is nothing I can’t mix.

I just released an album called NYC Beat Boxx under my Black Meteoric Star alias on Voluminous Arts.  I’ll be releasing a solo EP there next year as well under my own name.  On October 30th – 31st Voluminous Arts is presenting our second annual Halloquium (Halloween Colloquium), a virtual Trans and Queer led conference on nightlife.  I am the creative director of the event and a member of the curatorial team, which also includes Aveda Adara, Axmed Maxamed and Ting Ding.  An essay of mine entitled Hostile to Categorization: Initial Elements of a Lineage Study on “Techno” was just published by La Casa Encendida in Madrid, Spain as part of the collection You Got to Get In to Get Out. Early next year I’ll be releasing a physical edition of my long-form written piece Passageways and Portals through Voluminous Arts.  Voluminous Arts is also launching a couple very special merch items soon, including a fundraiser for SWOP Brooklyn;  a local sex worker outreach, community, education and peer support organization.  We’re also hoping to put out one final release before the end of the year.  Keep an eye out, it’s a good one.  Barbie Bertisch wrote a brilliant research piece for the Voluminous Arts website about loops, breaks and DJ tools and we will be sharing a powerful transcribed conversation between Nik Dawson and Russell E.L. Butler there soon as well, with links added by me for deeper looks into all the incredible references they drop throughout the conversation.  Both those pieces were inspired by the NYC Beat Boxx record.

Well, always.  Feel free to ask me anything. Playlists
Space Is The Place with Sapphire Slows
© The Culture Space LTD 2022. All Rights Reserved
Design by Deep