Hailing from Warsaw, producer, DJ and vocalist Avtomat is a core part of Oramics and Ciężki Brokat, two collectives that focus on supporting women and LGBTQ artists from Central and Eastern Europe and creating safe spaces for queer ravers, respectively.

Collectives like these have always been important in Poland, but now more so than ever. A recent statement from Poland’s far right President Andrzej Duda laid bear his views towards the LGBTQIA+ community, fostering an even more hateful and violent environment than before for those living in the country.

This is nothing new though, these sentiments have been shamelessly echoed through the government for several years now, demonstrating how instrumental Ciężki Brokat and Oramics’ work is. As well as championing these communities on the ground, last year in a bid to support queer Polish organisations and fracture these degrading far right ideals, Oramics released Total Solidarity, a mammoth compilation to raise money for Miłość Nie Wyklucza and Kampania Przeciw Homofobii.

As well as providing platforms and spaces for these communities, Avtomat has his fingers in many other pies. As a composer and producer he leads folktronica project Pleśni, matching traditional Slavic polyphonic singing with electronica, while on a weekly basis he teaches production and DJing at Instytut Dźwięku in the capital.

For this week’s Wednesday Alternative mix he takes us on a full throttle ride through abrasive, vibrant and energetic electronics, from jungle to ghetto tech and deconstructed rhythms, and shines a light on several Polish and Eastern European producers. If you didn’t already miss the club, now you most definitely will…

Please introduce yourself… Who are you, where are you and what are you.

Hiya, I’m Avtomat, I’m a producer, DJ and vocalist based in Warsaw. I’m a member of two collectives – Oramics (where we focus on balancing the impact of women and LGBTQ artists on the Central and Eastern European scene) and Ciężki Brokat (which creates safe spaces for queer ravers, which is not a given in Poland). I also lead and compose for a folktronica side-project Pleśni in which me and two other vocalists blend bassy electronica with traditional Slavic polyphonic singing. I dabble in graphic design, 3D and illustration as well, following my formal education.

It’s irritating, abrasive, bouncy and soothing all at the same time. I really miss melodies and emotions in the club, so I usually make sure that the tracks are both innovative in terms of sound and contain some emotional value.
My 3D software drew this for you while I was recording… 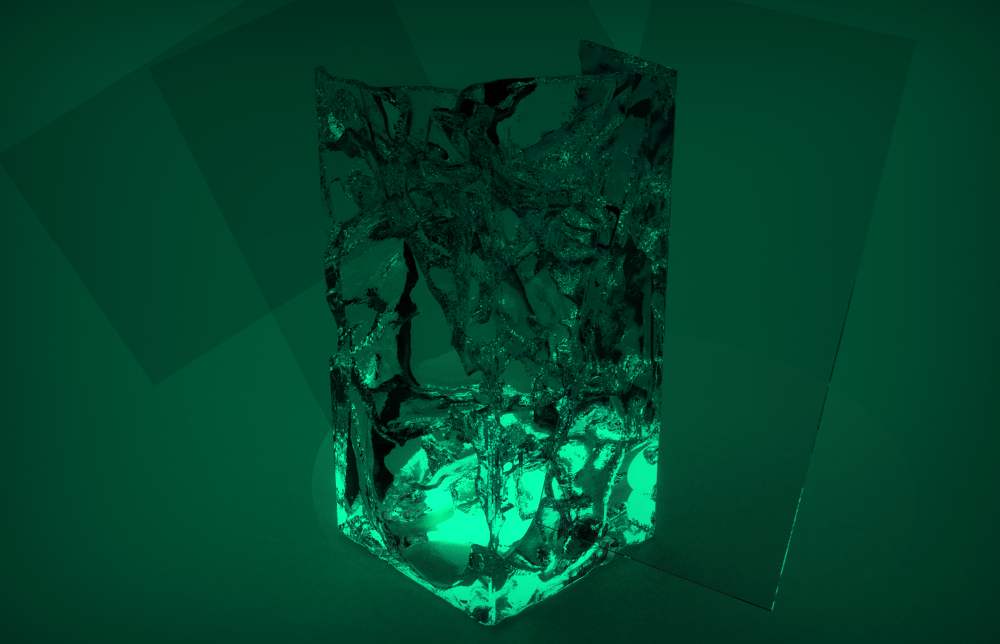 In Instytut Dźwięku, a production and DJing school I teach at on a weekly basis.

A huge, pitch-black hall with a high ceiling in which you are the only person placed right in the middle, so that you can do whatever you choose to in the dark, but still feel the immense space around you.

Whatever the fuck you want or nothing at all, your choice.

I’m all about pathos and dramatism – in a transparent enclosure on a tiny rocky island during a massive thunderstorm, featuring layered live vocals.

‘happy new yeah’ by cadeu from the Hyperboloid 2020 compilation. It’s such a bizarre, offbeat track, its rhythm reminds me of heart palpitations. I also love the title – what a delightfully morbid commentary on 2020 as a whole.

I don’t really listen to a lot of mixes, but if I had to choose it would be the yet unreleased set by ZULI from last year’s Unsound Festival – I could listen to it on repeat.

Definitely Liar, my musical twin soul from Bucharest. We have yet to meet in person, but I practically worship everything he does and almost every one of my mixes has a Liar track or remix.

Back when I was doing my graphic design course in Scotland I bought a cheap pair of KAM turntables (I think in continental Europe they were called Gemini) and a really weird Citronic DJ PRO mixer, which is part of my setup until  today, because I love finger-drumming on its unique Punch buttons (they let you reverse a fader in one click). Sadly, I had to leave the turntables on my doorstep when I was moving back to Poland – there wasn’t enough space in the car. I really hope someone benefitted from them. Right now I own a pair of Reloop RP-4000 M3D turntables and frequently use them in conjunction with Traktor Scratch. I’d love to grab a pair of proper CDJs too at some point, but they’re so damn expensive.

I don’t discriminate or play favourites – every single track in my mixes has to be something that I’d gladly play at home and dance to it and has to either fit in the flow of the mix or act as a contrast/surprise.

Usually one of my priorities instead is promoting fellow Central and Eastern European artists, so this mix contains unreleased tracks from Polish Penera and Romanian Zephyrus Trax, an amazing Aleksandra Słyż closer premiered for Pointless Geometry via Oramics, tracks by Oramics members (by ISNT and yours truly) and two tracks by Russian producers (ORTEGA and cadeu).

My first record was a 2001 Tuxedomoon ‘No Tears’ remix EP released by International Deejay Gigolo Records – it contains a Hans Platzgumer remix which I included in this mix – it has sparked my love for club music in general. Sadly, last year I accidentally tore the sleeve while playing it out, because I’m a big klutz.

The last one I bought was also used in this mix, which is a funny coincidence, really. It’s ‘Knot Being EP’ by Yem Gel, released on Kick + Clap.

Dirt, soot and radioactive dust mixed in with this crackly powdered candy that you would dip a lollipop in, I think it was called Pop Rocks. A kitschy apocalypse. It’s an acquired taste (laugh).

Definitely a chameleon. If you’ve ever seen one walking you’ll know what I mean.

I believe you can mix everything into anything if you have enough willpower, quick reflexes, a good ear and a wide enough range on your pitch fader (laugh).

Upcoming in the world of Avtomat?

Honestly, the lockdown has made me focus more on being a creative musician rather than just jumping from city to city DJing, so right now I’m working on a club-oriented EP for a very exciting label and fleshing out an upcoming creative residency at Warsaw’s Contemporary Arts Centre.

It’s not really a music-related matter, but as a queer musician it’s very close to my heart. For a couple of years now Poland has been flooded with a dehumanizing right-wing wave of hate towards the LGBTQ community. In the last couple of weeks we have been called ‘less than human’, ‘unnatural’ and all other kinds of things by politicians who have been living off of our taxes in a bid to hold down political power by making us the boogeyman. Hate and violence in our everyday lives has been escalating ever since, so if you feel like helping out selflessly – please donate to one of Polish LGBTQ funds while they’re still legal. Otherwise you can buy ‘Total Solidarity’, a massive compilation we’ve released with Oramics last year – all of the proceeds go to two LGBTQ funds that have been working tirelessly to change things for the better (Miłość Nie Wyklucza and Kampania Przeciw Homofobii). Thank you!