“Trying to find the rave one night...We were lost, we'd heard it was in a place called Newtown, but it turned out there were two Newtown's. We'd of course gone to the wrong one. This was the days way before smartphones..We'd been driving all night as we went to the south coast to find the party but it wasn't happening.”

Before the days of Wifi and SatNav, it took a team effort to navigate your way to the dance. Dotted around the country, transforming quaint woodland areas into makeshift retreats of revelry, the free party scene of the 90s were defined by community and collaboration.

Though often exaggerated and portrayed through rose-tinted glasses today, the collective body of dancers populating the raves of yesteryear were truly there to revel and indulge in this new movement together. The same can be said for parties today, however the levels of excitement created by new technologies and ever-evolving styles of sound can’t compete with what was happening three decades ago.

“Things were insane then in terms of energy levels and the fact this crazy music was new and was getting crazier and faster by the week it seemed. It evolved so fast. It really was a whole movement - massive convoys driving all over the countryside to do parties”

Racing around on motorways and narrow country lanes up-and-down the country, enticed by the unknown and endless possibilities, Tenniswood and his mates were experiencing an epochal era of entertainment. Soundtracked by 303 basslines, fuelled by strong booze, tabs and Es, it was a unique time of wholesome hedonism, enjoyed in the moment under stars and canopies. People flocked from all corners to unite under the moonlight, and dance until the sun appeared.

“On the whole, everyone was nice to each other and if anyone was found mugging anyone at a party they were dealt with...It was a very self sufficient vibe, no one was taking the piss, the parties were free. It's really hard to put into words how mental it was then to be honest.”

Every now-and-then though, someone didn’t get the memo.

“I remember hearing stories of a guy who was caught mugging people and he got locked in the back of a horsebox and made to do a huge line of K and think about what he'd done.”

Over the course of his 20 year career, the artist better known as Radioactive Man has produced hits that have terrorized dancefloors, and continue to do so today. With a career defined by collaboration and unity, it’s no surprise that Tenniswood has been a part of some of the UK’s most influential acts, as well as running pioneering labels that have helped contour the complexion of Blighty’s current scene.

Growing up in Weybridge, Tenniswood would pass the time by dancing and mixing. Two guys, who would later become close friends and similarly influential figures on the scene, played a significant role in livening up the sleepy Surrey towns.

Back when break dancing and scratching first graced the airwaves of roller discos around the country, Tenniswood was there with his crew, taking in these novel sounds and this new wave of dancing. Whilst the sonics produced obvious surprise, one of the selectors spinning those records would also deliver something of a curveball years later.

Phil Klein, known for his mutant machine music as Bass Junkie and as the brains behind the combative Battle Trax label, was one of the disc jockeys dropping the needle at these roller discos. It was only years later, having raved, recorded and remixed together, that the two friends would discover this strange realisation. The Junkie’s technique and mastery on the decks certainly had an impact on the Man.

“Phil was really the leader in terms of skills (excellent scratch DJ), knowledge and just being there at that time and diving into it all - firstly by DJing and then producing with people like Scott Weiser (Dynamix 2).”

One of the local sound systems would also inform Tenniswood’s musical nature. The Fear Teachers, a motley crew made up of Klein, Simon Brown and Brett Youngs (RIP), threw legendary raves in the woods, combining “one rig, one strobe light” and a quality soundtrack most weekends. Introducing Tenniswood to Underground Resistance and that classic Detroit sound, as well as going on to run the esteemed Control Tower label together, Brown had a clear influence.

“An early electro freak and acid houser in the late 80's...Simon was totally immersed in the free party scene from the early 90s.”

The three friends would become involved in the Haywire Sessions parties at Andrew Weatherall and Amanda Burton’s club, the site of his original performance as Radioactive Man.

“The vibe was amazing for such a long time. Truly crazy times were had and many good friends were made, particularly when it was at a place called The Fortress 2 near Old St. Proper lawless vibes. After it would be back to the Foundry on Old St for more shenanigans with Gimpo (one for those who remember)” 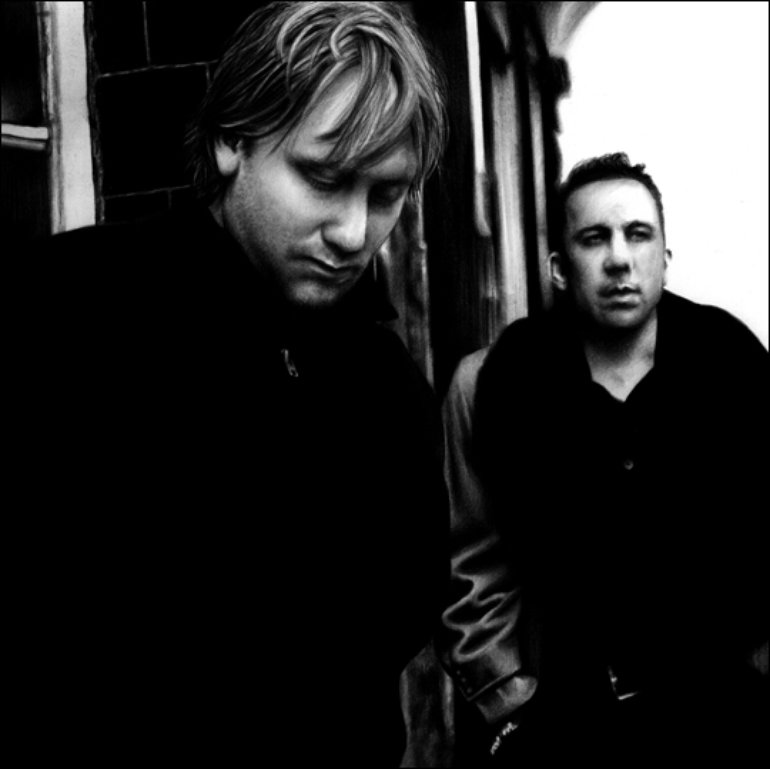 It was with Andrew Weatherall that Tenniswood would go on to form Two Lone Swordsmen, one of the 90’s most iconic duos. Working in tandem and feeding off of each other in the studio, the pair’s wiggy, tripped out recordings would come alive on labels such as Warp, featuring regularly on the pioneering bleep imprint, as well as Weatherall’s own Rotters Golf Club. These early sessions, harmoniously mashing drum machines and tickling synths, came at a point in time when Tenniswood was wholeheartedly fixated by novel sounds and equipment. New gear was popping up all over the place, and artistic creativity was in a completely unprecedented space given the technological offerings of the time. For a young producer, this was an electrifying time, an exciting experience of unfiltered experimentalism, clearly evidenced on his self-named debut album.

“I think the whole of my first album was really creative time for me and it’s partly down to the studio I shared with Andrew W at the time and partly because I was eager to try out some ideas on my own after working with someone for a good few years. I'm pretty sure most musicians will tell you the first recordings you do are literally so exciting because you get dizzy with the realm of possibilities that is totally infinite...even with limited equipment.”

Gaining inspiration not just from one another’s technique and creativity, but the pair’s expansive listening habits and genuine interest in anything that makes a noise, Tenniswood’s exploratory nature is well-reflected in his output. Although he is predominantly known for slapping, no-holds-barred electro, the Man isn’t limited to one style in his production.

On his limitless quest for wacky, wonky sonics, Tenniswood has churned out drum machine-driven dub as well, illustrating his finely tuned ear and masterful skill in the studio. With its unique complexion, the genre quickly drew the producer in, grasping his attention and fuelling his artistic approach.

“It’s the space in Dub I guess - using that sensibility in music is something I've taken from Reggae and Dub. I used to tape the Manasseh shows on Kiss FM every Saturday after Coldcut at 2-4am if I could. That was a good lesson in that music - it was really like the original underground music in a way..

Then of course there's the bass. It’s pretty much the only music where the bass is doing the melody. Now a lot of electronic music is mostly about the bass. But look at what Lee Scratch Perry did with a 4 track reel to reel and a few echoes and effects...nuts!”

Then again, maybe there was a little more than musical inspiration that got him interested in the spaced out wobbles of the bass-heavy genre.

“Being around Andrew W for years, we were both into that sound and we had various tape echoes, delay units and reverbs and a tonne of ganja at all times. I don't really smoke much anymore, I definitely got that out of my system then though. The one in the ashtray by the bed from the night before.. morning!”

Nowadays, collaboration continues to course through the ever-enthusiastic producer’s veins, catalyzing countless joint-projects. Alongside holding down a gig mastering and cutting vinyl, the Man runs Asking For Trouble. Releasing records he's made alongside his mates as well as reissues of his anthemic hits, the imprint embodies the true Tenniswood spirit of community and quality.

“I'm enjoying my musical life more than ever and running my label Asking for Trouble, so it’s all good. More recently I've really enjoyed collaborating with people, mainly mates and it’s all about having a great time in the studio - which we do." 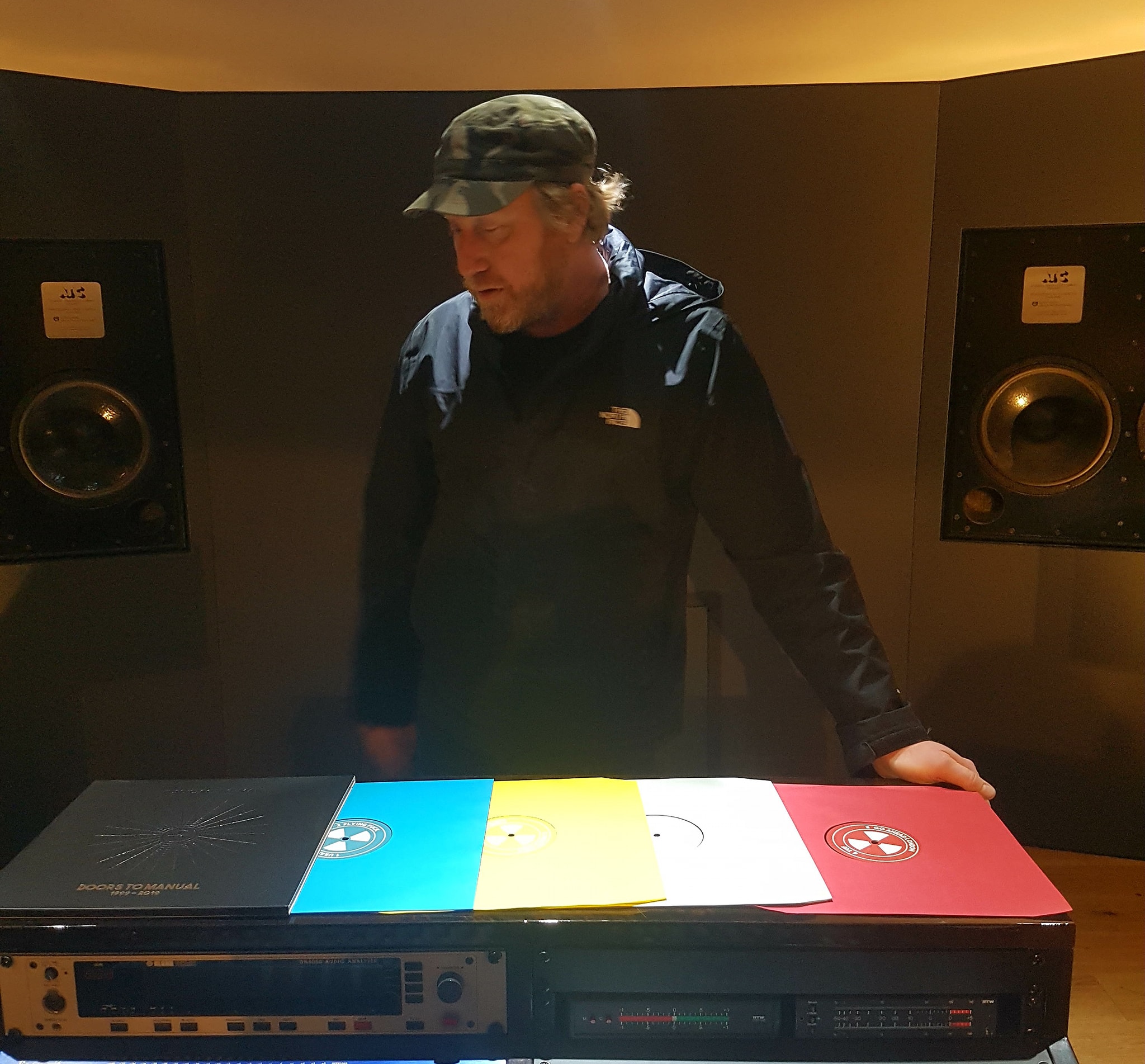 The label’s most recent release, Doors To Manual, embodies Tenniswood’s career, using his newer mastering skills to make some of his most meaningful tunes sound as sweet as possible. The retrospective reissue takes the listener on a sonic journey across the Man’s past two decades, revisiting different points in time through audial anecdotes. Celebrating a storied career, the four-vinyl LP proves just how consistent Tenniswood has been over the years, both in his output and philosophy.

As pertinent as every track is, there is one in particular that summarizes Tenniswood's technical brilliance and carefree attitude perfectly.

“Flying Fuck - don't ever give one about what other people think but about what makes you happy.”

We could all learn a thing or two from the Radioactive Man.