A Life Amidst The Punks: Gary Crowley Talks
Minute Read

A Life Amidst The Punks: Gary Crowley Talks The enthusiastic, slim, 50-something sitting opposite me in a hotel bar near the BBC HQ in the heart of London’s West End is talking 10 to the dozen… as excited as he was a schoolboy experiencing punk more than 40 years ago. Now he’s on to his first ever gig, in 1977.

“The first one was the Jam and the Boys. I’ve still got the poster. We got there about two hours before the doors opened. It was a big room, there was talk of lots of teddy boys coming down, that there was going to be a punch up. I can remember it now, I can replay it in my mind’s eye. It was the most exciting night of my life. The first song The Boys did was Sick On You. The pogoing had started and I thought I want a bit of this, this is my kind of thing.”

That teenage chancer was Gary Crowley, the gig and punk kickstarted a 40-year plus career in the music industry, one that has seen an involvement in all sorts, from radio DJ, to TV presenter, staffer at the NME, record plugger and much, much more.

He’s currently on the airwaves both via BBC Radio London, as well as Soho Radio: the latter a show with Jim Lahat concentrating on punk, post punk, new wave, power pop and more from the late 1970's and early 80's. The show has inspired a compilation album, Gary Crowley’s Punk And New Wave, which is being released in a limited edition vinyl version for Record Store Day.

“We had the radio thing, an audience of dedicated followers and then the idea of the album came up,” he explains. “I’d started the show with Jim, he really knows his obscure stuff. I put a wishlist together, Jim did the same. It made us realise how big an influence John Peel was.”

What they ended up with, after licensing and clearances from long forgotten bands and names, was 77 tracks on a 3 CD box, or around half of those on a double album put together for RSD, in coloured vinyl, natch.

There are more than their fair share of little games on there, many of which don’t normally feature on compilations of this ilk, eschewing the usual selections. For starters, there’s no Only Ones’ "Another Girl Another Planet", the staple punk and new wave compilation choice, rather Crowley and Lahat have plumped for their follow-up single, "You’ve Got To Pay". Other beauties include Optimo favourite "White Mice" by the Mo-detts, The Teenage Filmstars’ mod-friendly "I Helped Patrick McGoohan Escape", Dolly Mixtures’ "Been Town" and Generation X’s "far-too-good-for-anything-associated-with-Billy-Idol Wild Dub". Special mention too for Altered Images’ debut single "Dead Pop Stars".

“We didn’t want the obvious stuff, one of those Now That’s What I Call Punk compilations, I love The Clash and I love The Jam, but we wanted some less well known songs, a few curveballs,” he says. “There’s some mod revival and power pop on there, it’s the spirit of the thing; small labels, self-financed labels.” 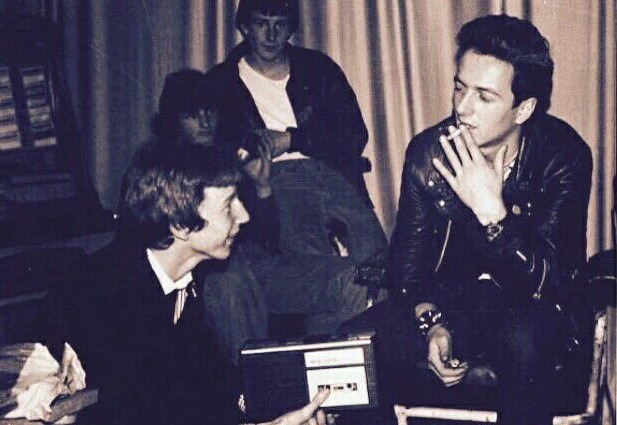 It also includes The Boys, the first band he saw, in the life-changing early days of punk. As a teenager, still at school, Crowley was truly inspired. “We hijacked the school magazine, turned it into our fanzine,” he recalls. “We interviewed the Clash, Steve and Paul, Glen Matlock, Rich Kids, The Jam, Buzzcocks, we did Sham 69. We were turning up in our school uniforms, it was so easy. We were speaking 20 to the dozen, in an endearing way, not obnoxious. I had a lot of bunny, a lot of enthusiasm.”

Joe Strummer, he came out of the Metropolitan, summer of 77, fuck, that’s Joe Strummer. This is one of the first big interviews was with Joe Strummer, after he’d bumped into him. Crowley was pushed to the front… “It was only meant to be a couple of us, eight of us turned up. They said ‘What’s this, a fucking school outing?’ but Joe said it was OK. We all piled in. Joe was lovely, Weller was the same.”

It set Crowley on a path in and around the music industry. “You knew that it was our time. I lived 15 minutes form the centre of town. As soon as punk happened, I thought I’ve got to work in the music business.”

His punk and new wave enthusiasm morphed into a love for 2 Tone and the late 70's Weller-inspired mod revival and on from there.

“It’s like that Woody Allen film Zelig. There was the soul boy thing in 1982 and 83, I was always into the clothes. Much as I loved punk, 2 Tone was something danceable. With new romantic stuff, I liked a few few of the records.”

He continues, warming further to the theme.

There are more stories aplenty, including his time as Wham’s tour DJ on their first outing. “George and Andrew were maybe 19, I was 20 or 21, it was their first tour. It’s the nearest I’ll ever get to being a pop star.”

He was even there or thereabouts for the acid house: “I wasn’t there for the first Shoom, but was at one of the early ones. I’ve still got the flyers, I love all of that. I never got into the M25 raves though.”

And with that, he’s off again, with more tales of a life in London, out and about and a genuine enthusiasm for music, old and new.

Gary Crowley’s Punk And New Wave is out on CD now, and as a special vinyl set for Record Store Day. Listen to him on BBC London and Soho Radio, and elsewhere.