Beaming Up To The Freaks: The Hague's West Coast Sound

Ahead of a celebration of the West Coast Sound at The Crave Festival in June, we take an in depth look at the history of the scene.

Beaming Up To The Freaks: The Hague's West Coast Sound

Ahead of a celebration of the West Coast Sound at The Crave Festival in June, we take an in depth look at the history of the scene.

Asked what comes to mind when describing a West Coast Sound you would be forgiven for conjuring images of big Californian sky, perfect surf and endless beaches. You might talk about the shimmering pop guitars of the Beach Boys or the top down, lush and low sounds of G-Funk or even the East vs West Coast hip-hop wars . Think West Coast and it’s easy to swallow the all-American sugared pill of spring break, muscle cars, gang violence and surfing U-S-A. However as the late eighties gave way to the early nineties, the first squawks and beeps of a different West Coast Sound was laying down roots and gathering an underground momentum on a rapidly changing European continent.

Situated in South Holland, The Hague is the largest city on the Western edge of the Netherlands. It’s main promenades are daubed either side by the embassies of the world’s superpowers and the judicial chambers of the UN’s International Court of Justice. Beyond the city and the last remnants of the Atlantic Wall, lies the vast and tempestuous fields of the North Sea. On the surface, The Hague and the network of satellite cities around it would appear as an unlikely epicentre for Europe’s best answer to Detroit’s Underground Resistance but, by the turn of the early 90s, that is exactly what they had become. So, what exactly is the West Coast Sound of Holland?

In essence, it is a mixture of three musical genres - 80s Hip-Hop infused Electro, synthy Italo music and the DIY, rough edged spirit of Detroit Techno. But picking at the scab a little more reveals The West Coast Sound as a noisy, unsettled beast. It is an entangled, distorted wave of beaming pipe synths, mouldy acid lines and tripped out drum sounds. It’s made from fractious, gargling signals plucked from interplanetary climbs and miriad inspirations, loosely committed to hot worn out tape and reflected against grey city concrete, industrial sprawl and the soft mesh of bodies at a squat party.

It is a DIY movement in its purest form, made predominantly on the broken backs of beat up analogue equipment and kept away from the trappings and polish of big time studios. In the words of I-F, a talismanic proponent of the West Coast Sound it’s “Always a little bit nasty, filthy, always with a rough edge, not polished or marketed, never made in a difficult way.” The West Coast Sound never flirted with the same mainstream success that similar hedonistic movements such as Madchester’s Acid House scene did around the same time. If the big house, piano sounds of The Haçienda were epitomised by a yellow smiley face The Hague sound was “Not Black. Not White. But Grey.” A fuzzily drawn in-between thing that formed a messy mixing palette where different ideas could collide and merge together to form a cohesive, utilitarian beige up.

Something should be said here of a surprising shared ancestry between the Madchester and West Coast Sounds with the West Coast Sound of Holland taking the form of Madchester’s diametrically opposed, savage twin brother forcibly kept underground. One of the knock on effects of UK’s The Criminal Justice Bill of 1994 (often cited as the nail in the coffin for the free party acid house movement of the late eighties and early nineties) is that it forced many promoters to get legitimate, ushering in the age of the high-gloss super club. 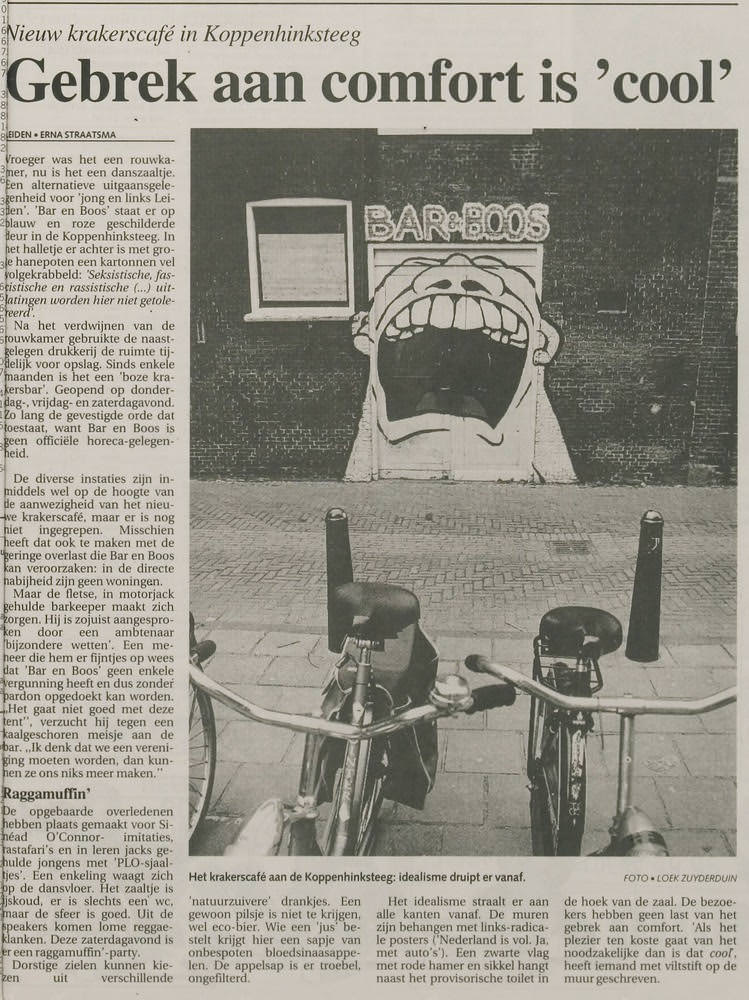 For those who were less easily adjusted to the red tape of the UK’s new face of clubbing there was something on offer in South Holland which they could “slash and burn.”  South Holland’s bustling flower industry was attracting “hundreds of British people” to the West Coast with a combination of ample labour opportunities and wild squat parties. Faced with nothing better to do, this rag-tag bunch of ravers immersed themselves within a punk squatting movement that was accidently laying a blueprint for what would become the West Coast Sound of Holland.

DJ TLR, who grew up 10km outside of The Hague in the neighbouring city of Leiden and would later go on to establish the mighty Crème Organization, describes those early parties.

“Everyone was there. Posh students and white trash hooligan types. Even dogs would wonder in.” Left to their own devices, the squats would open their doors to campfire raves. There would be little done by way promotion or production but recently vacated municipal buildings, power stations and schools would be taken over by 1500 plus alternatives in search of something to do.

“We went to a party and then we left and there was this guy in the corner standing there, y’know bouncing around. We came back the next day and he was still there in the same corner doing the same thing. There was no light shows or nothing.”

The city officials in The Hague and its surrounding towns like Leiden and Delft were pulling themselves out of bankruptcy with ferocious urban renewal schemes that saw “whole neighbourhoods being torn down to be rebuilt, leaving a lot of empty spots.” With a large proportion of these cities seemingly missing, the city centres were amok with freaks and weirdos free to from a largely unchecked alternative scene cooking up a melting pot of rebellious ideas.

Crucially what the squatting movement and its parties represented was an opposition to the galling humdrum of the mainstream that existed around it. As TLR puts it “Back then, there was a divide between the mainstream and the alternatives. You could see by the way people were dressed what group they were in. Everyone who was alternative was all on one side.”

The music wasn’t always the biggest draw that attracted people to the parties more that “there was nothing else to do.” These cities were either abandoned or being turned into something that residents in the squats were not invited to, “There was really commercial, fast handbag house but even if we wanted to get in those places, we would never be allowed. The only places where you could pretty much do what you want without taking financial risks or whatever was in squats.”

“There was no need to make money. No one else was interested.” Untied from the financial pressures of the mainstream club circuit and being the only space in which alternatives could meet and express themselves allowed for a cross pollination of ideas - the essential greying that allowed for the disparate, unrelated influences of the West Coast Sound to take equal steed against each other and turn into something else. DJ TLR is graciously dismissive of this “I don’t really know what we did. I just remember it was always really crowded and weird and fucked up, with wet walls and everything and loads of freaks. There might be some money made from drinks and then that would always get stolen at the end of the night.” 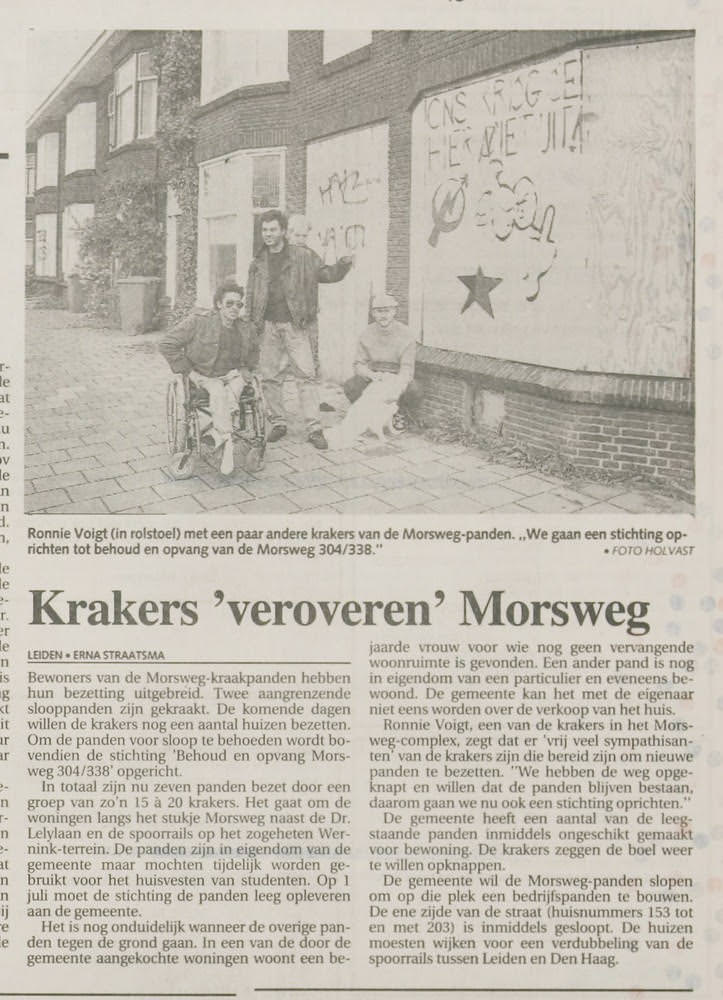 As the wick of the campfire raves was snuffed by the predictable rise of personal infighting and all the other perils that come hand in hand with a hedonistic, no holds barred lifestyle a new void that needed filling appeared. There needed to be something that the freaks could get behind again in order to defend themselves against the established malaise of handbag house and no-trainer policy clubs.

Searching for new distribution, Tavares wandered into I-F’s record shop, Hotmixx. Hotmixx was gaining a repetition for importing the weird and exotic sounds of Chicago and Detroit and also serving as a legitimate platform for the confused by products of The Netherlands’ punk acid spirit. As Tavares walked into Hotmixx his and Ferenc’s eyes met and they both stood looking at each other like “deer in the headlights”. Ferenc, an Italo boy with half a pot of gel in his hair, and Tavares, a “middle class nerd punk” came from very different sides of the musical spectrum but the lasting relationship that was struck up in that record shop was one that would go on to dictate the course of a label first and a DIY movement afterwards, with cross pollination at its nexus.

The nom de guerre used by Bunker Records is no happy coincidence either. It’s inspired by the military bunkers which made up part of the now decrepit Atlantic Wall. They acted as a position of defence against allied invasion during Holland’s occupation during WW2. Under Tavares, Bunker records became a defence against the bleak North Sea, the even bleaker multiplex city built in place of the squats and the doctrine of pop-sensible dance music that filtered through its clubs. From the Bunker, the whirring refracted noises that would form the basis of the West Coast Sound could be thrown hastily against the machines it was built on and then beamed up to a network of like minded freaks across the world. 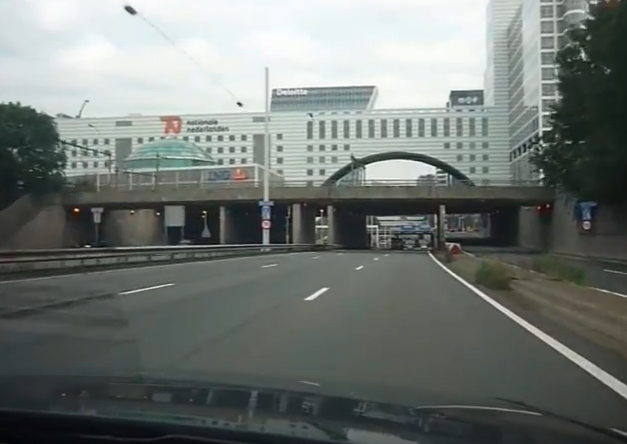 Through this network of cuckoos, the West Coast Sound has continued to grow, spawning household labels such as I-F’s Viewlexx and Murder Capital and later, DJ TLR’s Crème Organization. These labels have come to define a sound picked up and played out in dark clubs and underground dance floors across the world, spanning releases from artists such as Legowelt, Rude 66, DJ Overdose and Orgue Electronique. It’s a testament to the spirit of the scene that when when we talk about the West Coast Sound, we are talking about something that is still very much shouting. If your local techno dealer doesn’t have a section in their racks marked, ‘The Hague’, then they’re relegating a rich musical legacy that is as explosive as Detroit, Chicago or Berlin to the cold.

Not that the West Coast minds too much. Surf’s up.