Meadows In The Mountains 2014 - A Wasteman Reflection

It’s what things are before they become ‘a thing’.

Meadows In The Mountains 2014 - A Wasteman Reflection

It’s what things are before they become ‘a thing’.

Meadows in the Mountains can be summed up in one sentence: it’s what things are before they become ‘a thing’. Let me explain what I mean by that horribly crafted sentence. Obviously there is no way of our generation to know what Glastonbury was like when it started out, but maybe it felt something like Meadows in the Mountains does today. Maybe it felt new without being unfamiliar, felt wild without leaving you lost, and seemed monumental without that feeling of your presence being insubstantial. Maybe Glastonbury did feel like all of those things once upon a time, and if it did then maybe Meadows in the Mountains has now become it’s spiritual successor for a generation that so sorely needs it.

When I arrived at Plovdiv airport it was with a Ryanair flight full of faces bobbing and jittering. We boarded the shuttle bus and our ascent into the Bulgarian wilderness began. It was a long journey which alternated through green, plunging valleys and grey, crumbling towns that seemed haunted by the remnants of Soviet pride. The same bobbing, jittering heads had now become wide eyed with wonder, smiles whitening as the conversation flowed over cheap Bulgarian beer.

Arriving in the town I was met with a surreal combination of bell jingling locals and enthusiastic event organisers. It felt like arriving at the first day of camp. We headed up the hill of the town to our accommodation which was a room owned by a grey man named Avram who moved slowly and always looked content. His wife cornered us immediately to unleash a flurry of bucktoothed Bulgarian sentences in a way that felt as ingratiating as it was confusing. The town had a peaceful, untouched atmoshpere. It felt like it’s own enclave nestled away from time. 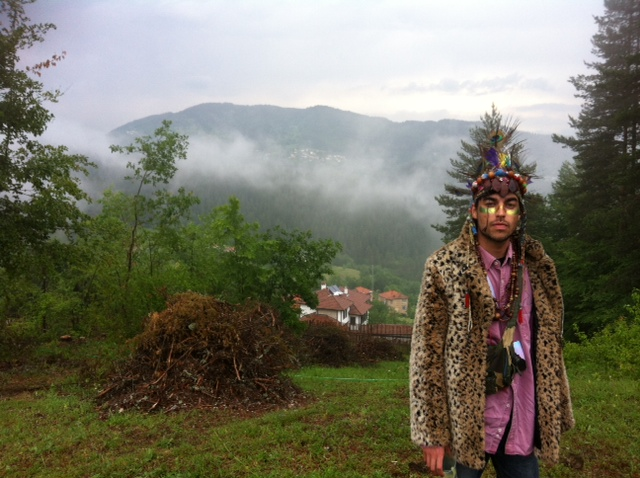 Transport to the site is an experience in itself. We jumped into a crumpled white van with a beaming fat faced local called Christo. He didn’t understand a word we were saying but his car could climb a mountain that felt like it was pretty much fucking vertical at points and he somehow managed to charm us by laughing at our confusion and mild terror.

At the site the air was clean and thick with the smell of the freshly cut wooden structures and pine trees. On entry I’m greeted with a hug by the ever smiling Benji Sasse, one of the two brothers who founded the event. The other brother, Damian; watched over proceedings looking like a wizened, bearded sage. Two more welcoming and friendly event organizers I am yet to meet. Every time Benji passed he stopped to talk, engage and usually ended conversations with a hug or a handshake. 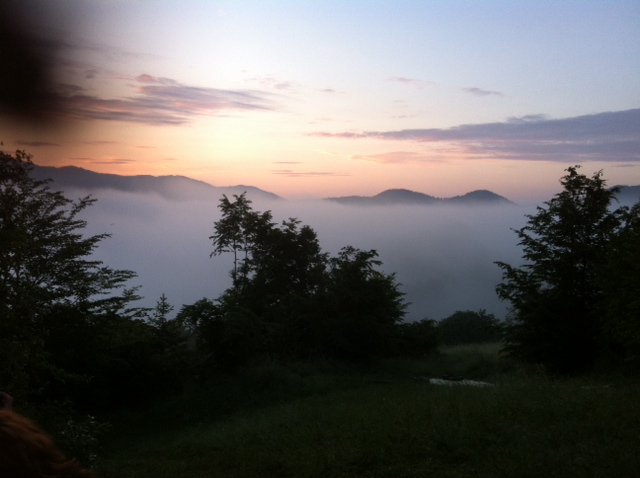 As we started to move around the site it felt like an adult playground. Not in a purely hedonistic way (although there was plenty of that), more that there were areas to engage with, climb and play on, all seemingly designed to evoke a child-like feeling of genuine exploration. I spent the first day just checking out all the different areas, including a giant spiderweb hammock amoungst the trees and a wooden temple built by people who looked like happy vikings.

The best moments started happening when we ventured off site to the fringes of the mountainside. The places that were really the hardest to reach, the little idyllic corners where you and your friends may find themselves witnessing the moon rise behind the mountain-top; causing you to howl and scream and laugh till you cry at the beauty and inchoherence of the moon being on fire. It was a great place to get spangled. 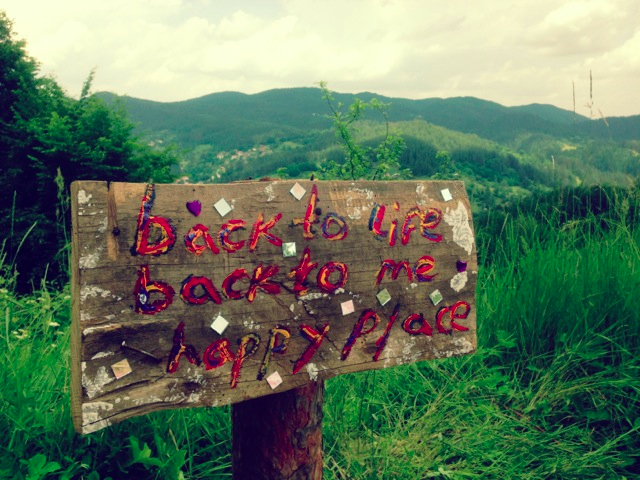 The music was split between the Main Stage and the Sunrise Stage; the Main stage playing an eclectic range of live music whilst the Sunrise stage played a healthy collection of sub bass dance, mostly Deep and Tech House from a variety of local and international DJ’s.

Friday night passed by in a frenzy of dancing, some people clambering on the stage to get naked and all of the punters dressed in exotic colours and a grin. When it came to the sunrise, everyone took a break from the frenzy to sit down on the wet grass and watch. In the distance a dam burst and a wave of mist cascaded through the valleys the fill up a moat of smoke surrounding the hillside. We were floating on a fucking sky fortress and we were invincible. The sun cut through the horizon and suddenly we bathed in the gold and whooped and hugged and everyone’s eyes and teeth flashed in the light. This was also a great place to get spangled. 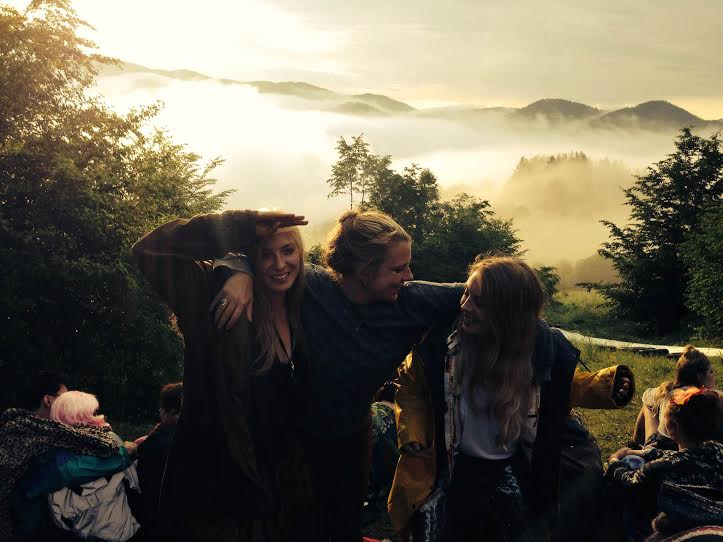 Once the warmth of the sun permeated through the site the party kept going. People found their own corners, the DJ’s kept banging out the grooves and it felt like it never had to end. Except it did because I was fucking tired, so I ventured down the hillside in a horse and cart. The locals just stared non-chalantly as what was tantamount to a zombie piled into the back of their cart and mumbled sweet nothings. Once in I sprawled out and let the clacking of the hooves carry me down, riding the jolts and bangs of the rocky path. It was surreal, but brilliant and unique. Once dropped off, we stumbled toward town and found a little waterfall at the end of a side path. Jumping in instantly washed away 12 mad hours in one hit of cold water.

On Saturday night the Main Stage really came into it’s own. Bathed in a green glow, there were evocative sets from both Andrew Ashong and Miss Baby Sol, Andrew Ashong in particular played an ethereal cover of Bob Marley’s ‘Is This Love’ that almost reduced me to tears. It’s lucky that I am well hard and can’t cry or it would’ve been embarassing. After that it was time for Strangelove to take the stage in what was best performance of the festival. Dressed like bombastic Native Indians, they tore through a dizzying set of vocal dynamics and booming beats that spread a strong energy through the crowd and left everyone wanting more. 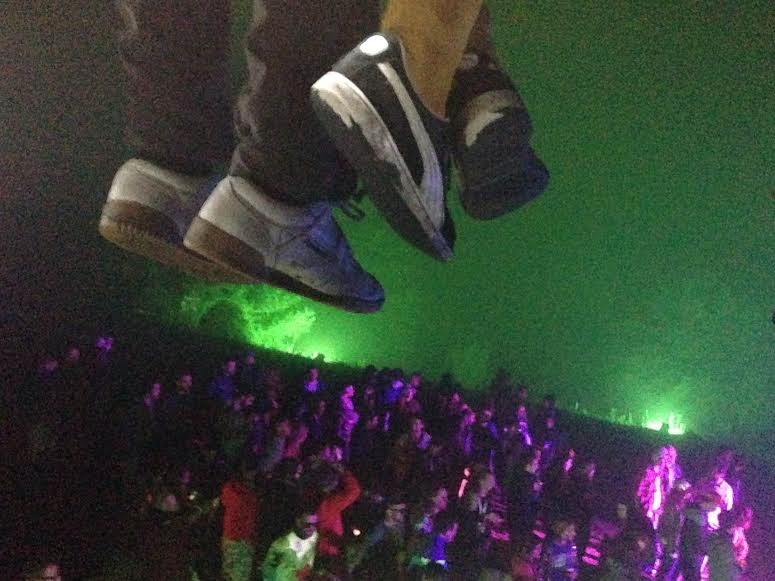 Moving on to the Sunrise Stage that night I was then confornted with one of the best DJ sets I have ever heard. Albrecht Wassersleben hails from Berlin and certainly displayed his credentials with a crushing 6 hour set of Tech House that raised the spirits from the dead and spread their remnents over the crowd. By the time he dropped this remix of Gravel Pit he had convinced a friend of mine to cancel his flight and give up a week of work to stay and forget that reality existed. 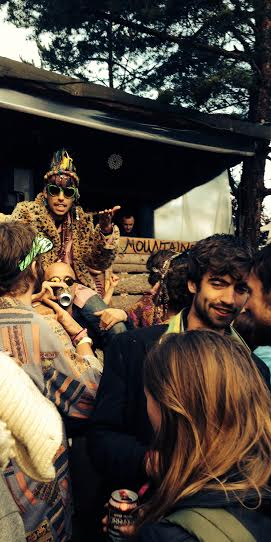 The next day passed with a collection of pencil drawn folk playing on the Main stage. Powering through the tiredness is easy when there is a tree top rope slide to pass the time on, plus things were kept interesting by the lead singer from a band climbing a treehouse and getting naked and dancing around for no particular reason. By this time, the crowd was actually quite used to people getting naked so I think he may have been taken aback by how indifferently the crowd reacted.

By the time Sunday rolled on, things were more crooked but still going strong. The beauty of the festival is that there is a collection of people that seem to genuinely give a fuck about each other and act more like a community than a swarm. Over the weekend I ended up meeting countless people, and by the third day their familiar faces seemed more like old friends than weekend associates. The uniqueness of the setting meant it always gave off the feeling of a certain fellowship, a sharing of having done something different which I really haven’t seen before in other festivals. 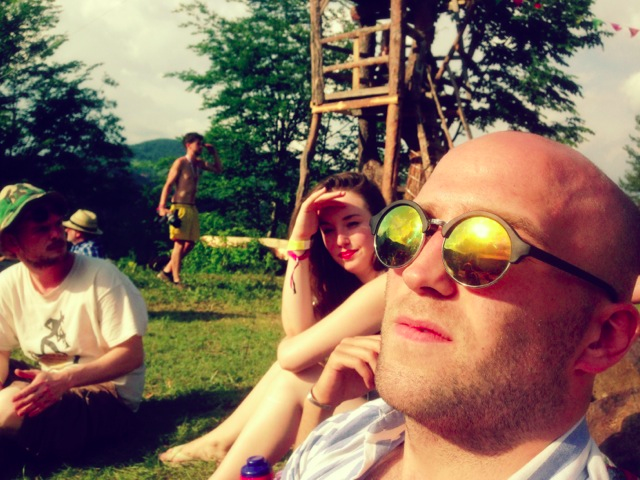 By the time it came to leave it was actually a little bit heart wrenching. I was blistered, mud encrusted and smelt like socks, but it had been an experience that was one of a kind. Obviously from here it will grow and get more successful and maybe will change as a result, but I’m glad that at least I managed to see it in this state because it was fucking crazy and amazing. As I drive out, completely shattered and with the bizzarre grinning locals still peddling and shaking their bells at us right up to the last second, all I can think to myself is how I’m going to be better prepared for next year.