A piece of history forgotten. The turbulent legacy of a festival lost to the depths of time.

A piece of history forgotten. The turbulent legacy of a festival lost to the depths of time.

Imagine a scenario in which a festival attended by over 17,000 artists from across 55 countries was forgotten. It happened.

Imagine a time when film footage was easily lost or destroyed, when memories couldn’t exist online amidst the eternity of the cloud...

In a year of dynamic cultural change in the West in which punk, disco and hip hop ran wild; FESTAC 77 should have been a defining moment for the new self-sufficient African diaspora, yet it remains a story untold. A potent mixture of grand ambition, national confidence, outrageous corruption and a lost legacy... FESTAC is now a fascinating tale worthy of new life.

FESTAC, aka The Second World Black and African Festival of Arts and Culture, took place eleven years after its predecessor. FESMAN, otherly known as the Festival Mondial des Arts Nègres, was hosted in Senegal in 1966 and was regarded as a cultural exercise by French African intellectuals rather than a celebration of independent African consciousness. It was widely attended and even marked a rare appearance from Nelson Mandela prior to his imprisonment.

Following this, it was nominated that Nigeria would be the next to host an instalment of the event... However, this was restlessly delayed by the brutal Biafran War, political indifference and repeated coups across many years.

By 1977 Nigeria was finally willing to show off insane new oil wealth and host this formidable enterprise. Nigeria had joined OPEC (Organization of Petroleum Exporting Countries) in 1971, alongside Saudi Arabia, Iraq, Iran, Venezuela and Libya. OPEC’s quadrupling of oil prices in 1973 meant that Nigeria, ‘the Lion of Africa’, was now loaded. 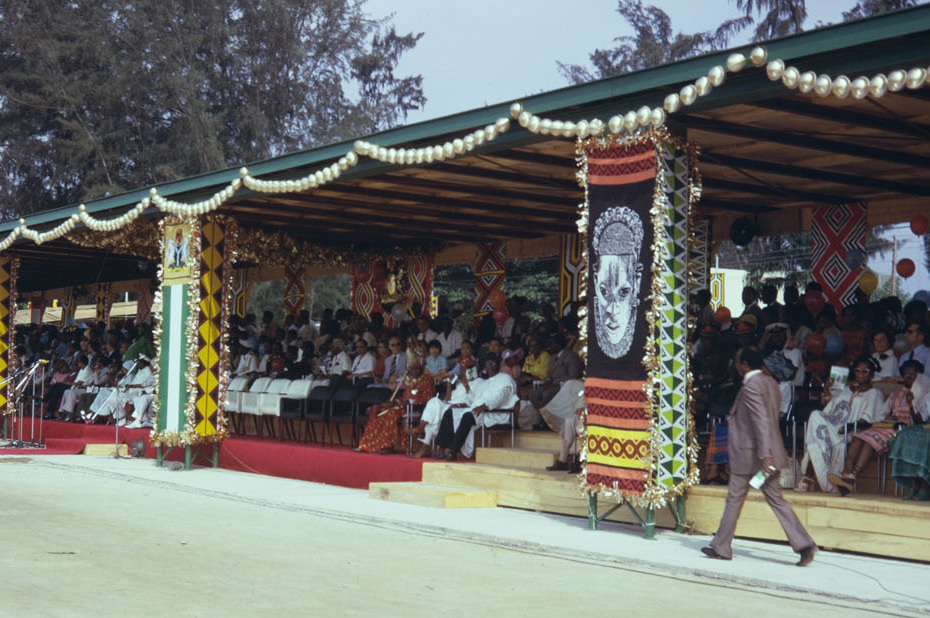 A monumental building project began. Nigeria could not afford to be embarrassed in front of the world - she was a modern country with a multitude of different ethnic groups and post-civil war, needed to exemplify the country’s new-found tolerance, even hegemony, of aspirations and national identity. New roads and squares were built or given a face-lift. A state-of-the-art housing estate was built in order to accommodate the thousands of festival guests and local workers. Grand hotels appeared in Lagos and Kaduna.

At the core of all this was the National Arts Theatre. Based on the Palace of Culture and Sports in Varna, Bulgaria, this centrepiece of the festival was built to mimic a crown rising from the earth - its circular spoked design brimming with expansive symbolism. The hall was the major showpiece, 5000 seats, an enormous rotating stage, orchestral stand and at every seat, earphones linked to interpreters. The full range of African arts were to be showcased here: from ‘dance-dramas’ and modern musical acts to intellectual debates and highly choreographed ‘traditional’ performances.

Like every military bureaucracy, control was not something to be handed over lightly. There was a narrative imposed throughout which allowed for little dissent and FESTAC had its backstory. However it was not imposed so obviously that festival-goers were shaken out of the celebratory feeling of what was to be a great party.

When the Ethiopian contingent led the grand parade around the National Stadium in front of 60,000 spectators on the opening day, few of the ecstatic international participants would have felt the machinations behind the event. An ‘imperialistic’ aesthetic was formed whereas the myriad of ethnicities, beliefs and histories of Black Civilization was subsumed into a simpler account - the traditional past moving inexorably into the modern future. Just like Nigeria. Even the structuring of which acts and when they performed at the National Theatre was guided by this ideology. The traditional, ancient arts were presented at the start of the festival and they ‘modernised’ thereon, with mainly contemporary Nigerian performers taking to perform at the latter stages. This didn’t take away from the lifetime opportunity that this was for many of the artists to be part of the jubilee. Wonderful shows were shown, seen and enjoyed but one of the main reasons for FESTAC’s problematic inheritance was this inability to allow the people to express their own identity as they saw it themselves. 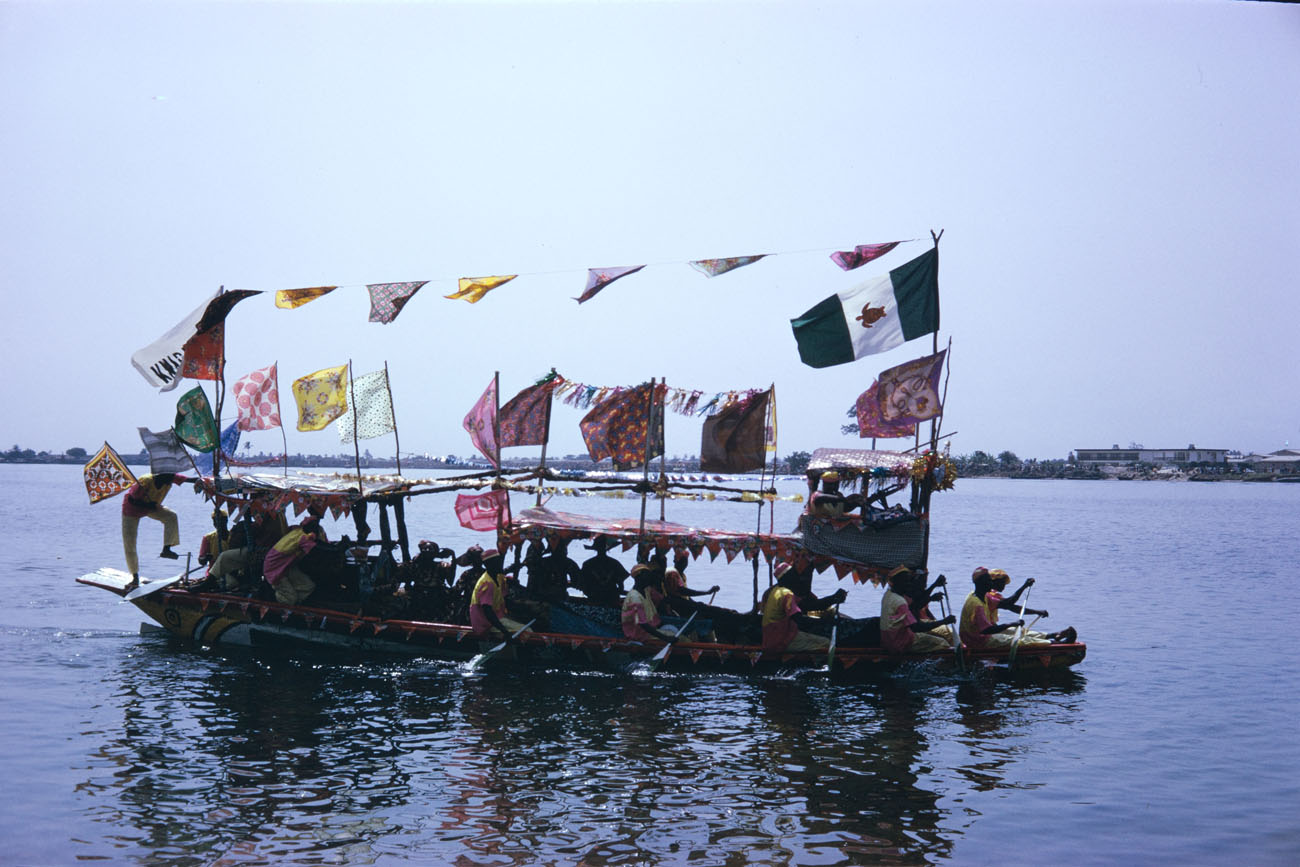 The chosen emblem and the defining symbol of FESTAC 77 was the FESTAC mask. This was the ‘brand’ - printed and painted on everything from clothing to walls, there was no escaping the mask. The icon was based on the mask of Idia, a 16th-century sculpture portraying the Queen Mother of the Benin Empire, which had been stolen when Benin had been ransacked and destroyed in 1897 by the British Empire. The Nigerian government had pleaded repeatedly and even offered $3million for a loan of the original but it was apparently too fragile to transport from the British Museum to its former colony. As a result the jewel had to be recreated by local artisans: primarily the Beninese artist Chief Joseph Igbinovia, who was never financially recompensed for his work, another tragedy amidst a wandering tale.

The festival lasted for a month and despite the controversy it was an impressive celebration of African culture in all forms - music, fine art, literature, drama, dance, religion and even fashion. A heavyweight lineup of artists from around the globe including Stevie Wonder, Gilberto Gil, T.P. OK Jazz, Bembeya Jazz National, Calypso legend Mighty Sparrow, Les Ballets Africains, Miriam Makeba, Donald Byrd and many others all featured.

European black communities were given titles such as ‘Black Britain’ and ‘Black West Germany’ and were represented by intellectuals and young artists. Haiti, the Dominican Republic and Monserrat were among the Caribbean contingent, groups from the USA joined South American representatives. Elsewhere, traditional dancers from Central Africa and the Middle East performed at the refurbished Tafawa Balewa Square. Igbo legend King Sunny Ade’s gentle ode to the festival ‘Welcome To Nigeria’ from his ‘FESTAC 77’ LP became the de facto anthem. One can only imagine the parties, such feelings of expression and unity at this greatest of gatherings for the Black World. Not everyone felt the same though... 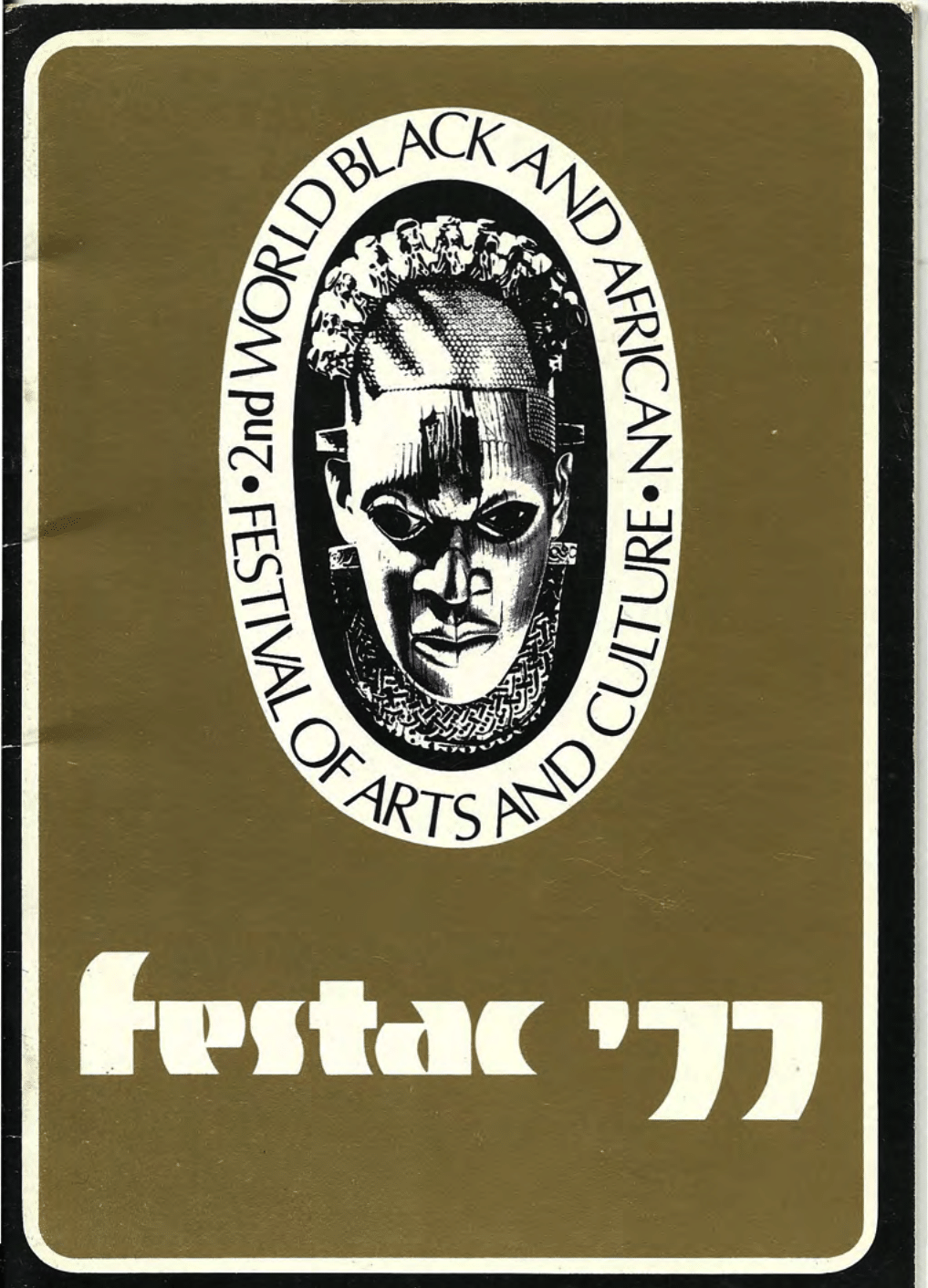 By 1977, the co-creator and figurehead of Afrobeat, Fela Kuti was an artist at the height of his power. He was an endless source of criticism for Nigeria’s ruling elite, his music and ferocious political stance giving voice to the downtrodden of his country. Despite this, it was assumed and demanded that Nigeria’s most famous musical son must be part of FESTAC, which he was initially, joining the National Participation Committee, the artistic steering group for the festival. He was joined by leading Nigerian writers, thinkers and artists but the whole enterprise was lead (un) naturally by a General in the military establishment. The creator of such fierce anti-army tracks like ‘Zombie’ was never going to be an easy fit.

Ever suspicious of Nigeria’s rulers, Fela refused to be a part of a system run by the military...

“I didn’t know that my resigning would cause so much shit.”

Instead he hosted concurrent all night events at his own self-styled Kalakuta Republic compound. Festival guests and performers Stevie Wonder, Sun Ra, Hugh Masekela and Caetano Veloso and Gilberto Gil, turned up to his infamous venue the Shrine to jam. From the stage, Fela would rage against the Nigerian government and FESTAC itself, whilst displaying the real Nigeria: funky, raw, impassioned, a far cry from the well-meaning, tightly organised shows of the festival.

The government never forgot or forgave this provocation. One week after the festival ended, up to 1000 soldiers raided the Kalakuta compound, beating, raping, arresting, and mortally wounding Fela’s own mother. Fela nearly didn’t survive himself. What happened that day at the Kalakuta compound would be, in time, the shadow of FESTAC. The brutality inflicted on the people’s favourite son would not be ignored. Fela himself, would replay the story in his classics ‘Unknown Soldier’ and ‘Coffin For Head Of State’. His anger and militancy only increased and as the National Theatre decayed, the narrative would no longer belong to the Generals. Even now, a couple of generations later, most young people from Nigeria would look blankly at the name of the festival, though they would recognise the name of Festac Town.

Unlike many Olympic Villages around the world left to rot post-event, one arguably positive result from the festival was the continued existence of Festac Town, the purpose built housing estate created to host up to 100,000 festival guests and workers. This well designed project was sold off afterwards to private bidders and for a time, was a perfectly-functioning and choice place to live.

Over the years the population of this ‘estate’ has exploded to nearly 500,000 residents with a high proportion of squatters bringing the associated mixture of vibrant street life, logistical pressure and sometimes slum-like squalor. However, despite the difficulties and the Federal government’s disregard for the area, Festac Town has been home and hearth for many people from Nigeria and beyond for over 40 years. The irony is not lost that it has lasted longer than the stadium and theatre despite the hundreds of millions of dollars spent...

For all its many faults FESTAC 77 was a vibrant exposition of Africanism, a celebration of international Blackness and perhaps its legacy can be found in the current mood of cultural afrocentrism, from the sampling of Nigerian afrobeat in US hip hop, the blockbusting success of Black Panther in the cinemas to the con dence and vibrancy of the musical, artistic and literary scenes of contemporary Africa.

Perhaps this needs to happen again? Without the heavy handedness of political ego and interference: a celebration of international Black achievements by the people, for the people.

Truth & Lies will return to Houghton this summer with more of the above.