Suite Venitienne & Sophie Calle: A Reflection On The Art Of Stalking

We approach the 40th Anniversary of one of conceptual art's greatest feats.

Suite Venitienne & Sophie Calle: A Reflection On The Art Of Stalking

We approach the 40th Anniversary of one of conceptual art's greatest feats.

Sophie Calle: enigmatic, coy, absurd and most importantly, wonderfully French. As an artist in the 1970’s and 80s’s Calle built a career out of the art of stalking. Drawing on multiple mediums from photography and prose, to strip tease and talking therapy, her work delves into the phenomena of urban malaise, asking questions about agency, distance, emotionality and feminism. Inspired by the penmanship of Edgar Allan Poe and Baudelaire, Calle continues to resonate with contemporary audiences. Revisiting her contentious artwork – which has been the subject of both vehement admiration and vilification – poses her questions surrounding alienation and isolation anew.

Suite Vénitienne (1979) is amongst Calle’s seminal works, establishing her as one of the most eminent conceptual artists in the world. Published nearly 40 years ago, as a collection of photographs and text, Suite Vénitienne acts an intersection between visual art and literature: an immersive, poignant and interdisciplinary exploration of transience. Suite Vénitienne began as a project of people watching; Calle describes how she observed passers-by for months in Paris until she became fixated upon a man who she refers to only as “Henri B.” By chance she was introduced to him at a party, and from there she followed him to Venice where she photographed and recorded his day-to-day actions secretly for two weeks. What ensued was an intense dairy – Henri B.’s navigation of touristic hotspots, bars and cafés. Calle follows him down side streets, letting him disappear so that she can seek him out again. She watches him linger on bridges, imitating his footsteps after he leaves and wonders what he could have been thinking of.

Calle concludes that she feels as if she were falling in love. Charles Baudelaire saw romantic beauty in the fleeting glance of a stranger; ‘the delight of the urban poet is love-not at first sight, but at last.’ Calle’s intention through the repeated images of Henri B.’s passing presence is to immortalise this moment; ‘to stake a claim on ephemeral things’. Venice opens itself up to her; it’s hauntingly empty streets - as depicted in her hazy black and white photographs - becoming ‘a repository of her desires’.

The ‘flâneur’: a characteristic individual who aimlessly meander the city streets, observing its manifold inhabitants. Baudelaire envisioned his flâneur as the Painter of Modern Life, ‘rendering and explaining it in pictures more living than life itself, which is always unstable and fugitive’. Suite Vénitienne is a retelling of the Edgar Allan Poe short story ‘The Man of the Crowd’. A precursor to the detective genre, the story portrays two city wanderers or flâneurs: the narrator who sits in a café with a cigar and newspapers, and a mysterious old man whose name is never disclosed. Stuck by impulsion the narrator follows this old man through Paris for an exhaustive 24 hours for no other reason than he was ‘struck by the absolute idiosyncrasy of his expression’. Likewise the erratic pursuit of Henri B. ensues unjustified: ‘everything happens as the result of the unwarranted predestination: why him, why Venice, why follow him?’ 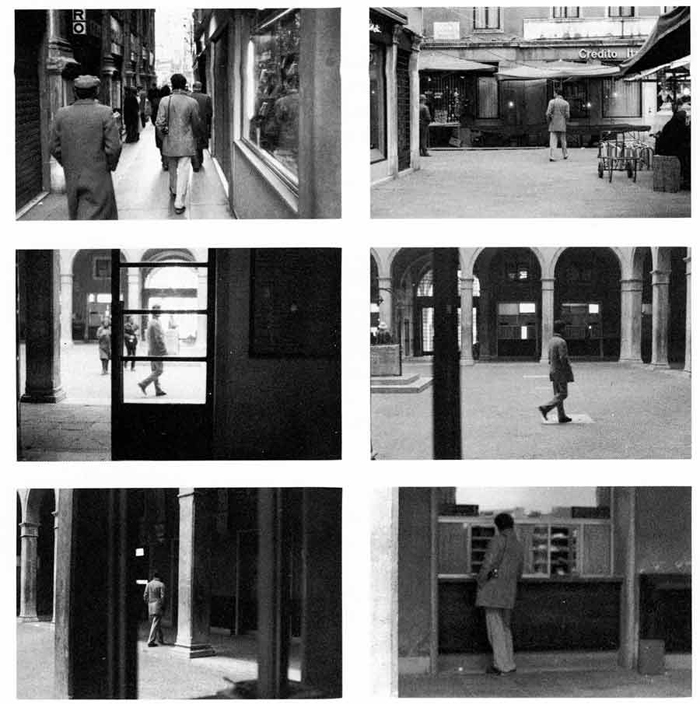 Acting as the spy and the psychoanalyst Calle explores the unexplainable fascination with a figure lost in a city crowd. For sociologist and philosopher Georg Simmel, this experience of ‘loneliness in togetherness’ is personified by a metro journey: human bodies are packed in close proximity to one another, but each passenger avoids eye contact and interaction. Fervently angling her camera lens does nothing to reconcile the shadowy figure - ultimately he remains elusive and anonymous. Suite Vénitienne concludes with the image of Henri B. as he exits the train station – his trip is over. Calle observes him leave and is confronted with a profound sense of loss. Ultimately her venture has failed; the emptiness of the photographs - looming buildings or settings devoid of human figures - replicates the detachment of life in the modern metropolitan city but cannot neutralise its corrosive impact on the human psyche. Only once does Henri B. confront Calle face to face – her eyes have given her away despite her disguise of a wig, hat and sunglasses – and we are filled with dread and trepidation. “Your eyes, I recognize your eyes, that’s what you should have hidden.”

The pursuit of Henri B. – his enduring distance and unknowable identity despite Calle’s invasion – is a venture that we replicate using our own personal stalking techniques online. Social media awards the kind of anonymity and detective tactics that Calle could only dream of. Whilst on a crowded bus or train, we shy away from direct interaction, choosing instead to scroll through Instagram, Twitter and Snapchat. In flicking through the holiday snaps of a distant mutual Facebook friend are we replicating the quest for closeness with strangers that Calle dedicated her life to?

Henri B.’s agency is lost in Suite Vénitienne; he is an unknowing participant. Calle’s most controversial artwork The Address Book (1983) brought her into the spotlight of popular culture. Whilst walking through the streets of Paris Calle discovered a lost address book. Upon contacting the first name listed in its pages she decided to conduct a series of in depth interviews about its owner – referred to as Pierre D. The encounters were published almost daily in the magazine Libération. When Pierre D. discovered what she had been doing, he threatened to for invasion of piracy. Calle herself fell under scrutinising gaze when tabloid newspapers printed sensationalist nude photographs from an earlier work Striptease to report the story.

Sophie Calle’s enduring knack for following people and infiltrating their private lives from afar is an ominous nod towards contemporary surveillance culture and technology. Equipped only with her camera, notepad and a love affair with flânerie Calle made short work of seeking out Henri B. A recent study discovered that the average British citizen is photographed up to 70 times a day. CCTV, iPhone tracking and a host of other insidious techniques police our movements through modern urban spaces, with potentially more insidious motivates than Sophie Calle and her eccentric projects.