View From The Side: Where Are The Women?
Minute Read

There's been a lot of noise recently about the lack of female acts featured at mainstream festivals. Reading and Coachella have both come in for a justifiable gunning. Posters have done the rounds that illustrate the all round chap-heaviness of their line ups, showing how the bill would look if all the male only acts were removed – here's the sparse answer: 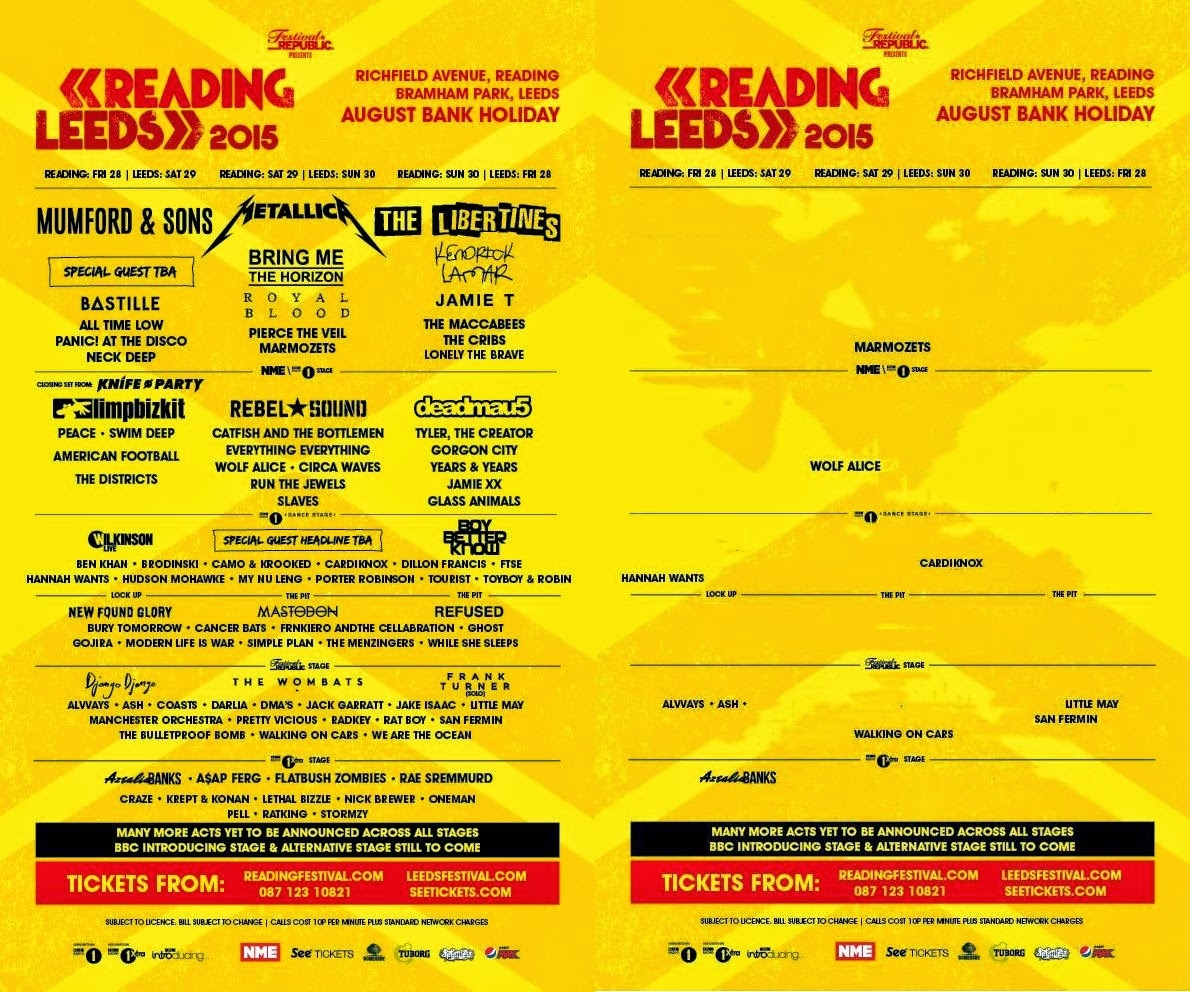 This got me thinking – does the same apply in the world of dance? no one seems to be making any noise about it, so I guess all is good, right? But as I've been reporting on line up announcement after line up announcement I've noticed that the problem is, if anything, worse – if you deem this to be a problem that is – for all I know you've got some sort of UKIP-like view on women's capabilities vs men's.

Let's take the Creamfields 2015 line up: out of 93 performers battering the bassbins on Saturday, 4 are women. That's a crazy statistic, and I can't figure it out. I'm guessing that women make up a good 50% of the crowd at Creamfields, so why are they only less than 4% of the line up? It turns out, however, that the Saturday line up is a veritable paragon of suffrage- the Sunday bill has one woman, in the shape of Hannah Wants, and the Friday, that has a big fat none. Huh?

Maybe this is an aberration? Well, apparently not – here's the line up Ultra Europe have announced so far:

So that's zero women at all. Admittedly that's only the headliners, and maybe they'll surprise us all with a second tier announcement packed with lady ravers, but this seems as likely as the festival banning day glo, sync buttons, instagram, and dickheads.

At this point I'm literally baffled – maybe this is just an EDM thing? Creamfields and Ultra both favour cake chucking bro pleasers, your Guetta's and Ingrosso's. Maybe the testosterone fuelled world of build and drop is just too damn buff and manly for any delicate flowers of femininity to handle. On a side note, it's interesting that neither festival seems to have any hint of gayness about it AND WHY SHOULD THEY because, as we all know, gay people have got fuck all to do with dancing, nightclubs, or inventing virtually all house music as we know it.

Anyway, I found myself wondering if this lack of women- or anything that could be seen as feminine- is something to do with the rise of EDM. Maybe the way dance music has been repackaged to sell to suburban American kids who don't buy guitars but still believe in dick swinging dudes has had a big role to pay. I thought I'd have a look at some more 'underground', 'credible' events.

How about The Garden over in Croatia – maybe they'll have a better ratio. I should know this one because Ransom Note itself is doing a boat party aaaaand we have booked zero women to play. Fuckity. It turns out that we're also part of the problem. Overall the festival has 4 female acts and one act with a women in, and possibly- just possibly- a handful more; the line-up on the site doesn't list all of the DJs playing the various boat parties, so it's feasible that there's another one or two tucked away, oestrogen riddled stowaways on a sea of man.

But this means that, whilst I'd love to conveniently blame this massive gender imbalance on dance music's recent intense bout of commercialisation, that just doesn't wash. The underground is at it just as much as the big players. Again, what's the deal?

Even forgetting the hordes of women who are dope DJs (off the top of my bonce; Heidi, Steffi, B.Traits, Monki, Barely Legal, Maya Jane Coles, Kim Anne Foxman, Cassy, Annie Mac, Ellen Alien, Magda, Hannah Holland, Siobhan Bell, Miss Kitten etc etc) it also seems that a dance music staple, the vocal diva, has also been wiped away. This is stranger still – there are as many massive female fronted house tunes as ever, but apparently these women are no longer deemed worthy of note. Where are the Alison Limericks', the Gwen Guthrie's, Baby D's or Ms Dynamite's? It seems that now a vocal contribution is reduced to a studio session to be replayed as a sample, ensuring no attention can be diverted from the guy flinging his hands in the air behind the decks.

From anecdotal evidence, I'd suggest that there are far more men than women involved in promoting, particularly in the world or house and techno, and this may be one explaining factor. Outside of that, I can only assume it boils down to a whole load of unspoken, quite possibly unacknowledged codes about who is and isn't a 'pull', who is and isn't 'credible', or able to 'rock it'. Do promoters really think that a women is a weaker booking than a man? That Chris Lorenzo is better than Hannah Wants? Or Bicep bigger than Maya Jane Coles? As a side note, loving the imagery Youtube channels like Deep House FøLELSE use when uploading Maya's (or anyone's tbh) tunes. Definitely has no bearing on this discussion.

As it happens, I'm not alone in noticing this – a Tumblr blog, Very Male Line Ups has sprung up, listing countless club line ups from round the UK that have – wait for it – very male line ups. Looking through it is somewhere between depressing and predictable, as have the inevitable squawks of outrage coming from (male) promoters and ravers. On the other hand, a look at the RA forum shows that amongst the hairy palmed chiefs spluttering about social justice warriors (ffs) and how women "don't tend to be as interested as men for whatever reason and not because of some sexist intimidation barrier or societal pressures… ur all dumb," there is a whole load of people interrogating what is actually going on. and kind of advocating for change.

The thing is, I doubt any change is going to happen. From where I'm sitting, the dance scene is just a tidy microcosm of wider society, and gender imbalance has formed a fairly solid bedrock for Western civilisation since – well, I guess since we based our laws and morals on some madness about God- a man- making Adam -another man- and then making Eve out of Adam's extra rib, only for her to go fuck everything up, like girls have been doing FOREVER since what with all their giving birth and propogating the species business.

In case this seems bleak, there is a solution. Turn your back. Forget both the mainstream, and the supposed rave underground- which, tbh, is increasingly looking like a tiny, disappointing reproduction of the mainstream, but with more vinyl and a 'wear black' dresscode. Dream a little, then build utopias in an image you like. Looks like no other fucker will.