View From The Side: Paris Shootings And Suspect Narratives
Minute Read

As I’m writing this, news is breaking of a horrible shooting in Paris. Facts are scarce, but a few confirmed figures have emerged – Today, Wednesday January 7th, at some time around 11am, the offices of satirical magazine Charlie Hebdo were stormed by two – maybe three – masked gunmen. The intruders open fire and decimated workers – twelve are dead; ten journalists and two policemen. At least ten others are wounded, with three in critical condition. So far the police have caught no one – a man hunt is on for two fleeing shooters. The location of the third (if there was a third) is unknown. The background to this: Charlie Hebdo has notoriety as a satirical magazine, known for goading hard-line Muslims with mocking cartoons of Muhammad. They suffered a firebomb attack in 2011, apparently launched by angered fundamentalists.

As far as I can tell, those are the bare, verifiable facts. Photos of two masked, machine gun carrying gunmen have appeared online such as the below- 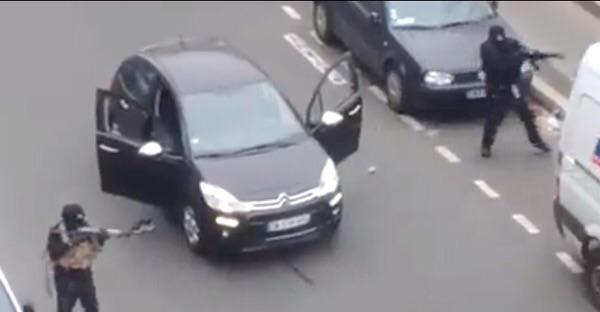 Outside of that, there is very little information.

But we live in the ‘information age’.

This means that despite a near total state of violent confusion, despite a complete paucity of verifiable facts, and despite no perpetrators being caught, the demands of constantly updated news sources mean that conjecture is flying, fingers are pointing and narratives are being cobbled together with the blunt tools of stupidity and prejudice.

Looking at the different news sources gives you a fairly plain insight into who wants you to think what. I would argue that at this stage, that what this horrible and tragic event is framed to mean is of equal – or perhaps even greater – importance then what it was intended to mean. First of all, there are currently no credible confirmations that the gunmen are linked to Islamic extremists. I’m not saying that they are not – because I don’t know. I’m just saying that at the moment there is no definite evidence that they are. However, some worrying disparities are coming out in reporting.

On this page Sky News writes

“Shocking footage has emerged of a wounded police officer being shot in the head at point-blank range as he lies on the ground, holding his hands up.

After the killing, the gunmen calmly return to their getaway car and shouted: “We have avenged the Prophet Mohammed, we have killed Charlie Hebdo.”

I thought this sounded interesting, in that it parks the blame for this incident quite clearly at the feet of Muslim fundamentalists – although, of course, anyone with a mask on can shout anything – that’s the thing about wearing a mask; it masks who you really are. However, when I followed the link to watch the footage, it turned out that the masked men couldn’t be heard saying anything at all. Here’s the video. You don’t need to watch it, unless you want to verify what I’m saying.

On the page where Sky hosted the video they didn’t mention anything about anyone shouting about ‘the Prophet’, instead writing –

“The gunshots stop and the two men below are seen calmly returning to the black car behind them before the video ends.”

Why the difference? And why are Sky News writing quite serious, pivotal facts based on no apparent evidence? I’m not here to make any claims – I’m just observing something that seems off key.

And now, as the news keeps rolling, as rolling news does, the claims that the gunmen shouted ‘Mohammad’ gain weight, supported only by sources taken from the internet – but as yet no corroborative live footage. This seems curious to me. As is the nature of a 21st Century disaster, the Paris shooting was surrounded by people with the means to record events. Live footage is being posted up online all the time, and I can’t help but wonder why, if as ‘an unnamed witness’ has suggested, the gunmen were shouting “Allah” it can’t be heard on any of the videos. And if it can’t be heard on the videos – which have fairly clear sound – who did hear it? I’ve watched all the footage currently available – a grisly and upsetting task if I’m honest – and I haven’t heard a single discernable statement. Why am I being told from a number of sources that Islamic terrorists are responsible for this disaster? If they are, then that will be clear when they are caught. If they aren’t caught then all we have is conjuncture.

Again, I’m not saying that this isn’t the work of some sort of religious fundamentalist group – it might well be – I’m just wary of a society that is so quick to apportion blame.

* EDIT – to make this clear – even if there are apparently videos where the gunman shout ‘Allah’ – which people have told me exist but still no one has been able to show me – I don’t see what difference this makes. All a man shouting ‘Allah’ proves is that the man knows how to shout. Or to put it another way; the ghosts in Scooby Doo never turn out to actually be ghosts, but they still say BOO.

Here’s a digression that I think is relevant. I was in America during the Oklahoma bombing of 1995.  It was a strange place to be. My dad had an Irish passport, and felt nervous. We had been going to meet the Turkish relatives of his future wife, and they felt nervous. Every immigrant, and every person of colour felt the threat of potential retribution, all for a crime they had nothing to do with. The media fanned the flames, full of stories that hinted or just plain invented a terrifying external menace, a dark threat from beyond. Consequently xenophobic and racist incidents spiked.

When it transpired that Timothy McVeigh – a hard right white American extremist – was responsible, I feel it made little difference to the collective psyche – those seeds of fear had already been planted, and once that shit takes root it’s very hard to extract.

This is what is going on right now in the reporting of the Paris disaster. Public opinion is being sculpted. The mirror is being tilted to reflect back one particularly ugly facet of our society. I could easily write that the gunmen seem suspiciously professional to me –  they don’t look like young idealists who have been training in the mountains of Syria – they look like they’ve been doing this their entire lives. However, that would be irresponsible because I don’t know shit.

And until I, or the rest of the world has a bit more evidence (which we may never have) I would council people to be extremely cautious in their response to this tragedy. Most of all ask questions. Let’s see this not as an isolated incident but as an event that begets further events – because that’s what it is. And in that case, who benefits from the action of the gunmen? Who loses out?