View From The Side: Love Rave Culture, Hate Appropriation If you’ve ever been to a rave you’ve probably glimpsed a few White Girls Wearing Bindis.

If you’ve been to many raves, you’ve almost certainly spotted Dashiki-Clad White Ravers and them White Kids in Rasta Stripes.

If you’ve never been to an electronic music event before, allow me to create a vivid image for you.

You’re slightly worse for wear. You’re pumping (both) fists, exalting the DJ and yelling “GUITAR MUSIC IS DEAD!”. It’s all going fabulously, until you see a girl dry-heaving by the decks. She’s white and, like some other Caucasian girls you’ve seen tonight, she’s wearing a bindi. You wonder: is the South-East Asian decoration somehow linked to electronic music? Do these girls acknowledge the religious and cultural significance of the bindi? You shrug and carry on yelling.

Ain’t nobody got time to call out casual racism at 5am in a warehouse.

It’s easy to dismiss such incidents when you’re dancing your Huaraches off but the implications of rave fashion do need to be discussed. We need to talk about the dashikis, bindis and Rastafari-striped clothes that majority-white ravers throw on and think “Damn, I look alright!” These garms may seem like harmless style choices but actually they appropriate marginalised cultures.

So, what exactly is cultural appropriation? My go-to definition is from the ever-fabulous Everyday Feminism. According to EF, cultural appropriation signifies a “power dynamic in which members of a dominant culture take elements from a culture of people who have been systematically oppressed by that dominant group.” Recently, this concept has been gaining lots of media traction. See endless think pieces and tweets about “hipster headdresses” at U.S. festivals, cornrows in high fashion and, of course, Miley Cyrus twerking. From esteemed journos to Justin Bieber, people from across the globe are discussing cultural appropriation. It would seem that digital media has got it covered, right?

When it comes to discussing how celebrities/pop culture exploit oppressed cultures, digital media is on it. These areas are widespread and highly visible, both of which aid discussion, but also lead to us overlooking more niche spaces. The Great British rave scene is a hotbed of cultural appropriation but it receives no lengthy, thought-provoking media responses (except from this guy).

Culturally appropriative rave fashion needs to come out from under the strobes and into the public spotlight. Here (in the form of imaginary yet not unrealistic conversation) are some reasons why the overshadowed topic is worth talking about.

It may only be a bindi to you but to large group of people it’s loaded with historical and cultural significance. The bindi originated from Hindu religion and culture. Traditionally, it is most commonly used to indicate a) a married woman or b) a third eye of spiritual sight. Non-Hindu South Asian women also tend to rock bindis and normally do so as a representation of their own cultures.

Can you see why these women may take offence to your replacing a sweat-drenched bindi in some dingy rave toilets? That said, not all South Asian women share a cultural connection with the decoration. Anjali Joshi argues that not every bindi-wearing South Asian can state the importance of the dot on their forehead. Many arguments against the appropriation of South Asian culture have overlooked this point but there’s also another reason for white ravers to avoid bindis.

For a long time, South-Asian women have been mocked and assaulted for wearing bindis. “Dothead”, “paki” and other racial slurs jump to mind. I shit you not, there was even a hate group called the Dotbusters in the '80s. How is it fair that when someone of dominant culture wears a bindi, they don’t experience the same risk of violence and derision? Because that’s how ridiculous cultural double standards work. If something is fashionable when white people wear it, but a source of animosity when a minority wears it, it tells of white people’s automatic privilege. Swamping yourself in red, gold and green might make it harder for you to get lost in the rabble but, you guessed it, Rasta colours also carry substantial cultural meaning. For Rastafari, red signifies the blood of those killed fighting for black peoples basic rights. Green symbolises the beauty of Jamaica’s vegetation and gold represents the wealth of Ethiopia.

They’re not only Rasta colours. Likewise, it’s not only a bindi, or only a dashiki.

“I just want to get freaky in my Dashiki… stop policing my fashion choices!”

Woah, I’m not enforcing my own fashion choices on you. I get that clothing can be a form of personal expression. However, if numerous South Asian women are vocally offended by the appropriation of bindis, then maybe, possibly, it’s not all about you. Jarune Uwujaren sums it up nicely. “using someone else’s cultural symbols to satisfy a personal need for self-expression is an exercise in privilege”. Western society frequently (and harmfully) reduces stripe-wearing Rastafari to “yah mon!” joint-rolling caricatures. With that in mind, is it really so important for you to feel sartorially liberated while snogging a UV-painted stranger?

“PLUR, We Are Your Friends, One Love etc.! Raves are all about freedom… there’s no oppressive structures here.”

I wish this was true, but it just isn’t. Britain isn’t “post-racial”, a “melting pot”, or “colour-blind”. Sadly, neither are raves.

We might think raves are awesome and countercultural but some societal prejudices are mirrored by the electronic scene. For instance: drugs.

Whether it’s MD, LSD or a mix of boric acid and what you think you bought; drugs are a visible part of rave culture. Less visible, however, are the double standards attached to taking, buying and dealing party drugs.

UK raves, electronic club nights, electronic festivals etc. are majority-white. In these spaces, the role of drugs is very different to majority-black spaces. At raves, drug use is deemed inevitable and spoken about openly. Yes, the police and security attempt to curb drug use, it’s common to see drugs being dealt/taken in plain sight.

With black communities, the situation is much bleaker. Black people in the UK are six times more likely to face drug arrest than white people.

When your country’s race bias is worse than the US, you know it’s bad. Here in the UK, white ravers get high care free while low-income black people are unjustly incarcerated for doing the exact same thing. If you’re white, there’s not much you can do about the privilege that society ascribes you. However, when you’re partying in an drug-laden environment while your black counterparts are being unfairly arrested for drug offences, consider not wearing a dashiki or Rasta stripes. 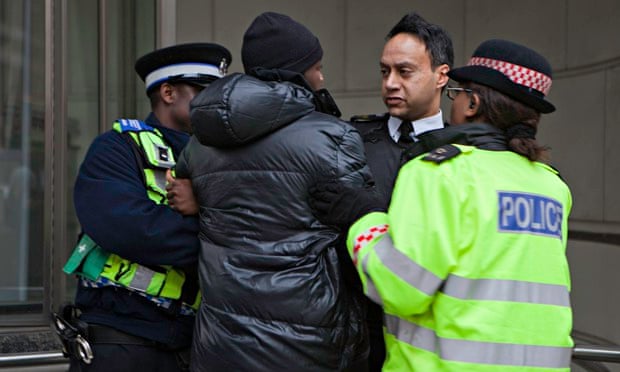 Another biggie: electronic music has its roots in cultural appropriation.  Not many know that the house scene was founded by queer African Americans. Same goes for Detroit techno and jungle. Thanks to black pioneers, house, techno and jungle took off worldwide. Forward to 2015, and electronic music is basically straight white men earning money from straight white men playing music to straight white crowds. Bar a few big names (e.g. Flying Lotus, Carl Cox, Kaytranada) black electronic musicians have been shut out of the mainstream. Rave culture has successfully erased its black roots. Couple that with its dodgy fashion choices, and it’s doubly exploitative.

There you have it: 3 reasons to re-evaluate your get-up before you head out tonight. I’m not saying that you should freak out and overanalyse everything. I’m saying that you should educate yourself. Swot up, think critically and learn about the best ways to show respect. Just whatever you do, don’t contribute to centuries of exploiting and misunderstanding the cultures of marginalised people.

We don’t need any more of that.

You can embrace marginalised cultures without objectifying them.