View From The Side: Graffiti – Vandalism Vs Art
Minute Read

View From The Side: Graffiti – Vandalism Vs Art

The artistic value of graffiti and street art has been the subject of heated debate since it first appeared on the streets of New York in the 1970s. Graffiti artists started out spray painting their ‘tags’ (like their signature) onto walls and subway carriages.

From the 1980s onwards, graffiti has developed a sophisticated language of it's own, with artists using stencils to leave more than just their tags around the city. Street artists like Parisian Blek le Rat covered the city with thought-provoking and interesting works of art and has been considered the father of stencil-based grafitti. Famously, pieces by British artist Banksy, who manages to keep the UK in suspense with regards to his true identity, became so popular that walls, doors and the sides of buildings bearing his artwork sold for thousands of pounds at auction. Nick Walker, who also led the way in terms of the street art revolution throughout the 80s had a substantial influence on Banksy, combining both stencil and freehand styles to create unique and beautiful pieces of work. 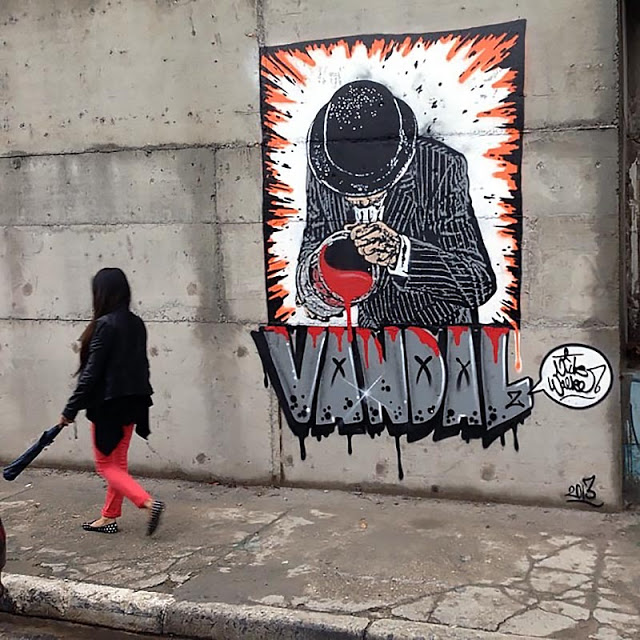 In fact, the UK has produced a long list of talented street artists, offering a huge diversity of approach. From the socially conscious Stik, who only recently completed the tallest piece of street art in the UK, to INSA's corporate sponsored creation of the world's largest animated gif, to Slinkachu who some consider the anti-Banksy, producing miniature creations of art around the streets of London.

Street art is now widely-accepted as a legitimate art form – David Cameron gifted President Obama with a piece created by graffiti artist Ben Eine on a recent visit to the White House.

The strange thing is… Graffiti is still illegal and is considered by British law to be an act of vandalism. According to the Criminal Damage Act of 1971, anyone caught in the act of ‘destroying or damaging property without permission’ (e.g. creating street art on the council’s lovely clean walls) will be arrested, charged and could face a fine or imprisonment.

In England, there is one man of the law all graffiti artists have to worry about; Detective Constable Colin Saysell, who has helped to convict circa 300 graffiti offenders in total. He publicly advocates prison sentences for street artists, even while the Prime Minister celebrates the art form by giving it away as diplomatic gifts… In general, British people now appreciate street art and our society celebrates graffiti. Councils go to great lengths to protect Banksy works around the county, because they know they have great financial value in the world of art. Street art has even made a move into the homes of people rather just the exteriors of buildings– designers use graffiti in wall art for the home, to create the ‘urban cool’ look that more and more admire.

If public opinion is generally in favour of street art, can we expect the law to be more lenient any time soon?

Ben Eine, the famous street artist chosen by David Cameron, has called out online to Detective Constable Colin Saysell, asking him to have a chat about the issue. So far he has refused, but at least some people are trying to have the conversation. Within the interview with Eine the subject arises around the cost of cleaning off graffiti, claimed to cost the government £300million a year, Eine emphasises that young people should be allowed to express their passion, posing the question, why clean it off? With the government being so strict on graffiti Eine suggests that this is just the stopping of artistic talent and production. This develops the interesting question; what is pure vandalism and what is an expression of art? There are facilities available for individuals to create their street art in a legal environment, but then without the freedom to express your art and work in a public space does this destroy the point of graffiti..? Whatever your views are on the subject, it’s unlikely it will stop soon.