View From The Side: Everything I Learned From Joining Hard Brexit Groups
Minute Read There are Facebook groups for every conceivable permutation of every possible existence. A fan of some obscure subsection of futurist war game Warhammer 40k, you say? Then welcome on in to the Warhammer 40k Squats group, where you can spend hours happily discussing made up space goblins with 1,384 other members. You want a safe space to discuss the mental health trauma you regularly face in your work as a dentist? Relax, Mental Dental got you pal.

So it’s little surprise that the rise in ardent, self-declared fans of Hard Brexit – where despising membership of the EU has become as much a facet of their personality as, say, liking the Rolling Stones, Leeds FC and cat memes- has resulted in a glut of Hard Brexit supporting Facebook groups popping up all over FB like a Union Jack themed game of Whack-a-mole.

I wonder, I’ve found myself thinking, what kind of person makes hating the EU a central part of their online persona?  At it;s essence the EU is as specialist and dull as a washing machine manual, albeit one that's replaced diagrams of spin cycles and charts of best practice for fabrics with a billion or so words on how to work a continent. It might be crap or great or whatever, but it seems surreal that people can be so incensed by a rulebook, especially one that has almost entirely fuck all bearing on their day to day life.

But what do I know? I’m a middle class liberal who writes for the Guardian, lives in East London and has never once seen Love Island. I drink a latte. I listen to obscure Italian synth pop and when I’m not listening to that I listen to unreleased Afrobashment made by artists I know of but you don’t. I’m a textbook hipster twat. I think it’s safe to assume that I’m the Hard Brexiteers natural enemy. In my carefully curated social media echo chamber, all I see is #grime4Corbyn, luxury socialism and meta- memes. I’m going out on a limb here, but I’m pretty sure that the 52% of people who voted for Brexit kinda weren’t seeing the same thing as me.

When I see a group called WE WANT A HARD BREXIT! (capslock, groups own) I automatically make a bunch of assumptions about the people inside – in short, that they’re frothing bigots who have rarely troubled a spellcheck, and who have a shaky grasp on any or all of the following concepts; fake news, treachery, Marxism, feminism, racism, sovereignty, the EU. But surely a big problem with our country right now is that we’re all making these assumptions without challenging them, right? Maybe WWAHB! is going to teach me a thing or two. So I thought, fuck it, why not join a few Brexit groups and see what the chat's about. Are these people really the demented hate sacks I’ve imagined them to be? After four weeks membership of WE WANT A HARD BREXIT! Here’s what I found out.

They believe literally any old bullshit

Muslamics! Eastern European Scum! Lib-tard Luvvies! Corrupt #Traitors! There’s pretty much no group that WWAHB! won’t love to hate based on quite clearly bullshit claims. In my sad time in the group I’ve seen everything from bullshit about Sharia Law in Richmond Park to bullshit about white British disappearing as an ethnic group to bullshit about the new Dr Who to bullshit about Vladimir Putin fighting Satanic paedophiles*. The people of WWAHB! are set on a hair-trigger rage stand-by. All it takes is one well timed meme, and they're off, threatening to 'do time' for what they're about to do in the name of defending decent British values. Heroes, all. To make matters slightly stranger, I started to wonder whether 90% of the memes were made by one dude in Moscow feeding the words Brexit, traitor, Trump, luvvie, Muslim, rape, Putin, refugee and paedo into a creaky generator and then pasting the verbal soup over some low-res stock photos of London buses. I'm not sure I could tell the difference either way.

*OK, hand on heart, I think Vlad might have a point about the devil nonces 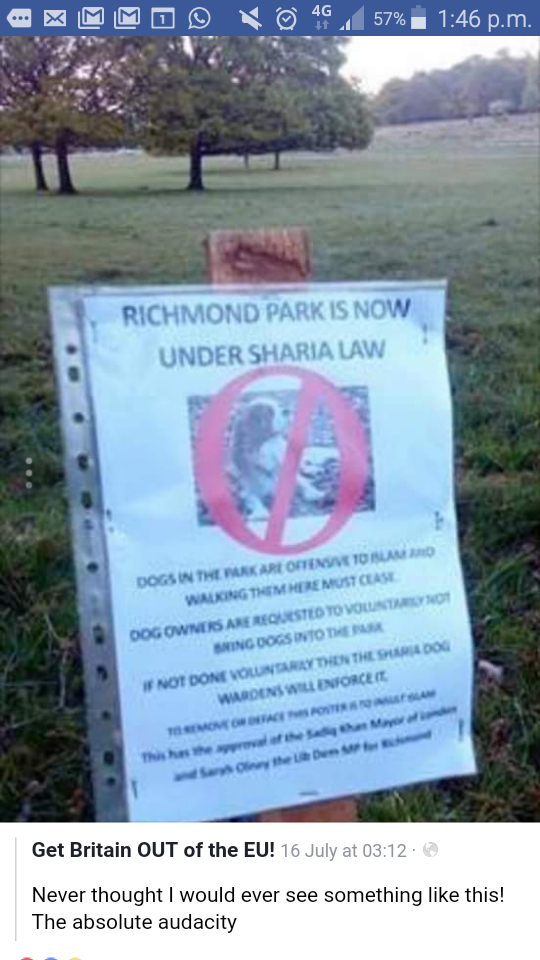 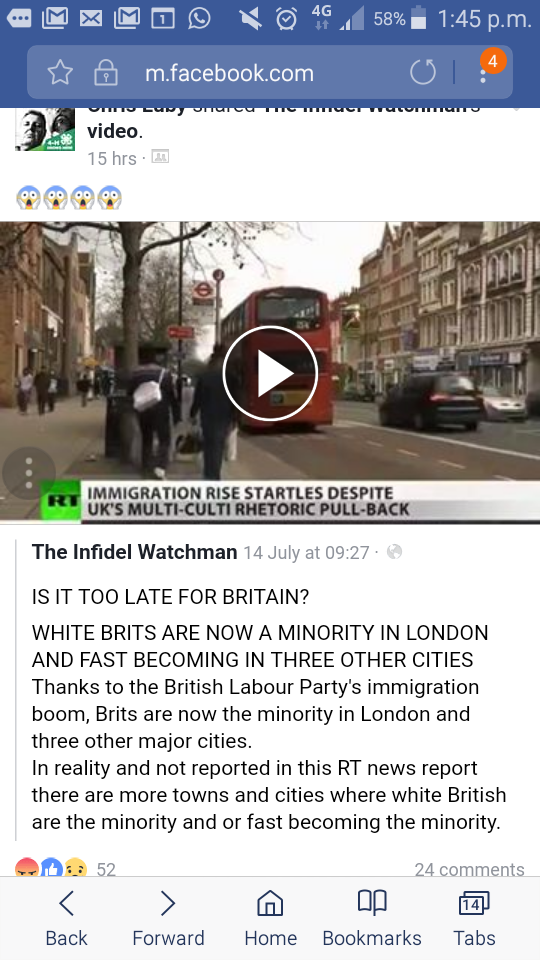 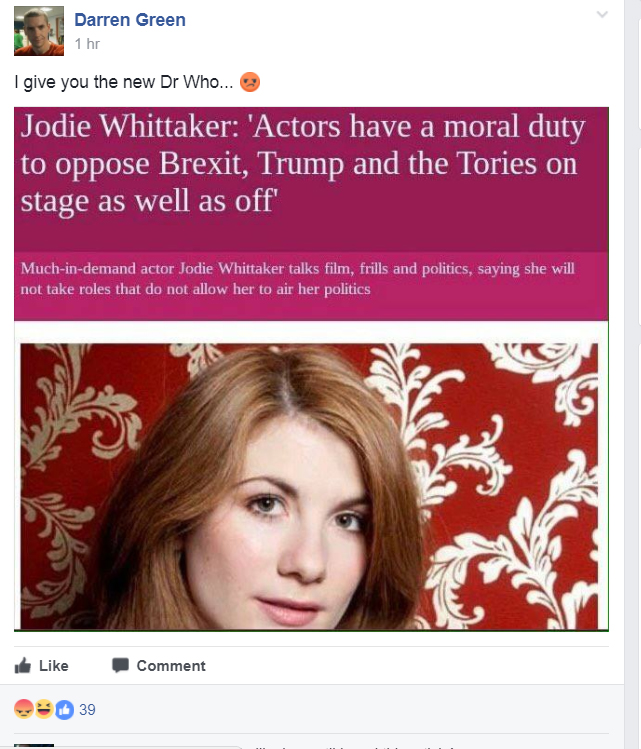 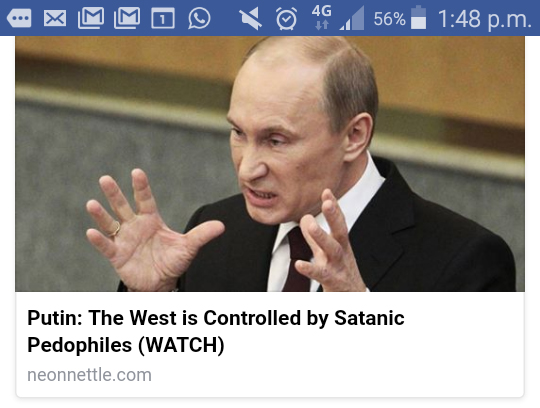 With so much bullshit flying about, the (moderatly) sane ones have a problem trying to police the mentals

Tbf I think we can assume that some small percentage of the group may not be willing to stoop to just anything to achieve Hard Brexit. I’ll thank you to remember that this is Britain sir! We’re not like the Hun, we play fair here! These bastions of fair play are more than happy to call and spade a spade – even if it means fact checking some of the more esoteric claims made by memes the other users like to share. For example, pity this poor gentleman trying to tell every other member of the group that Elizabeth Warren – an American politician they’ve almost certainly never otherwise heard of- didn’t actually say that “if women need to be raped by Muslims to prove our tolerance then so be it.” Over a good sixty or so comments he has to explain the concept of hoaxes, clickbait and fact checking sites to various shades of raging defenders of women, facing down the granite will of fellow Brexiteers Marty ‘stab them in the head’ Marty and Slack ‘I’d skin the bitch alive’ Jack with a patient tenacity that I found quite endearing. Still, you have to wonder if at one point he might start questioning why it is that he’s a willing member of group that is brimming with such complete fucknuts. 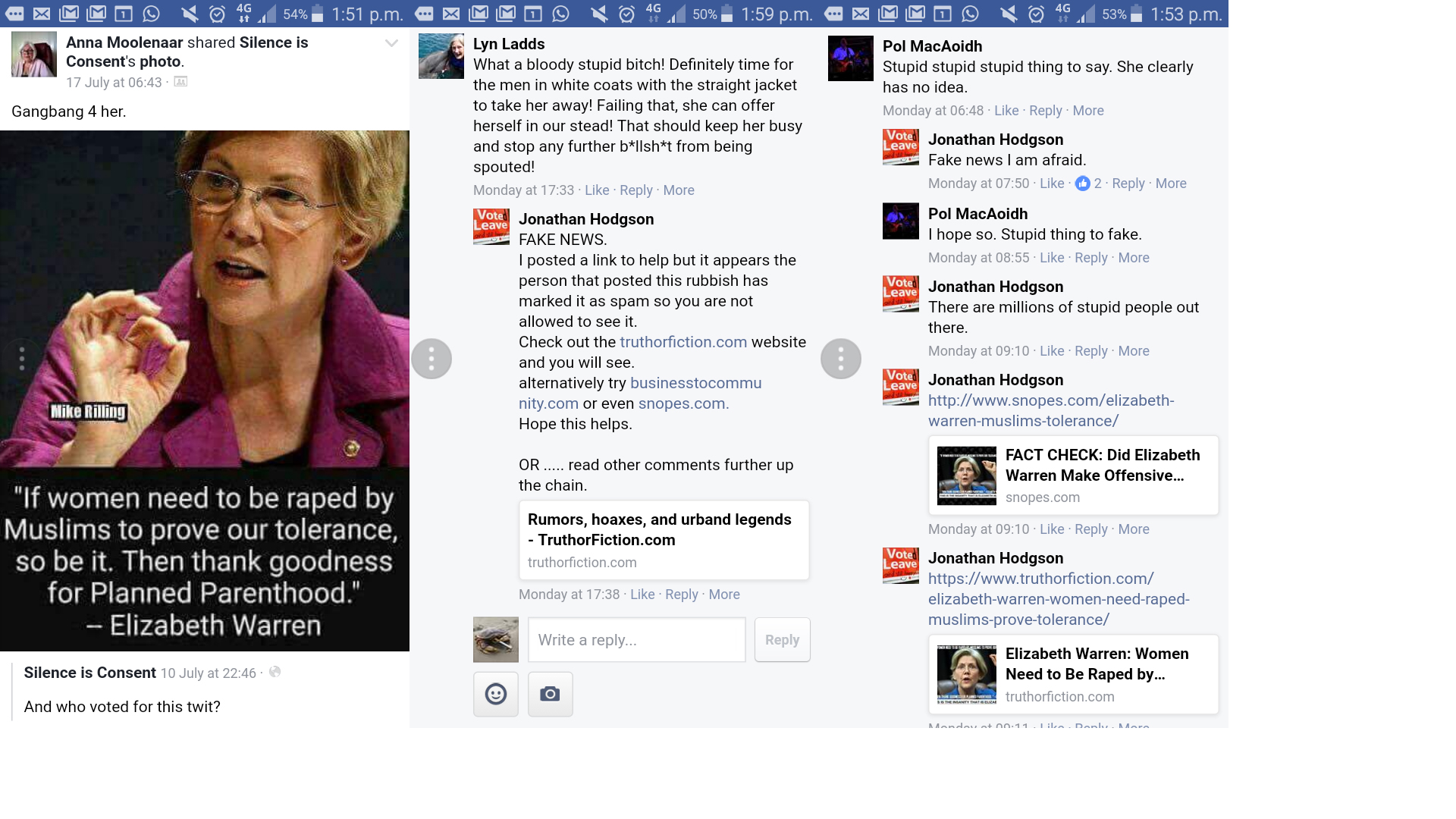 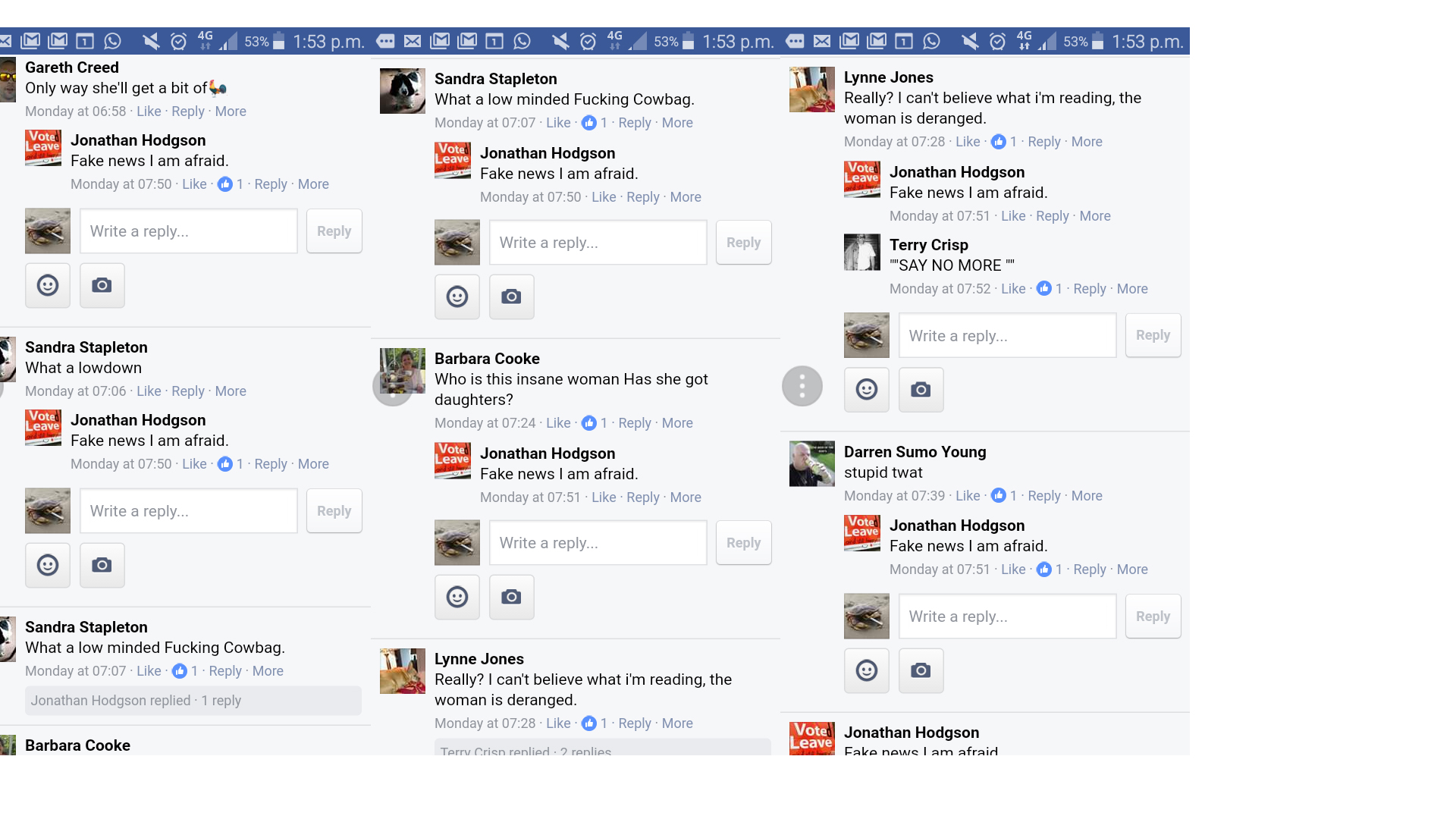 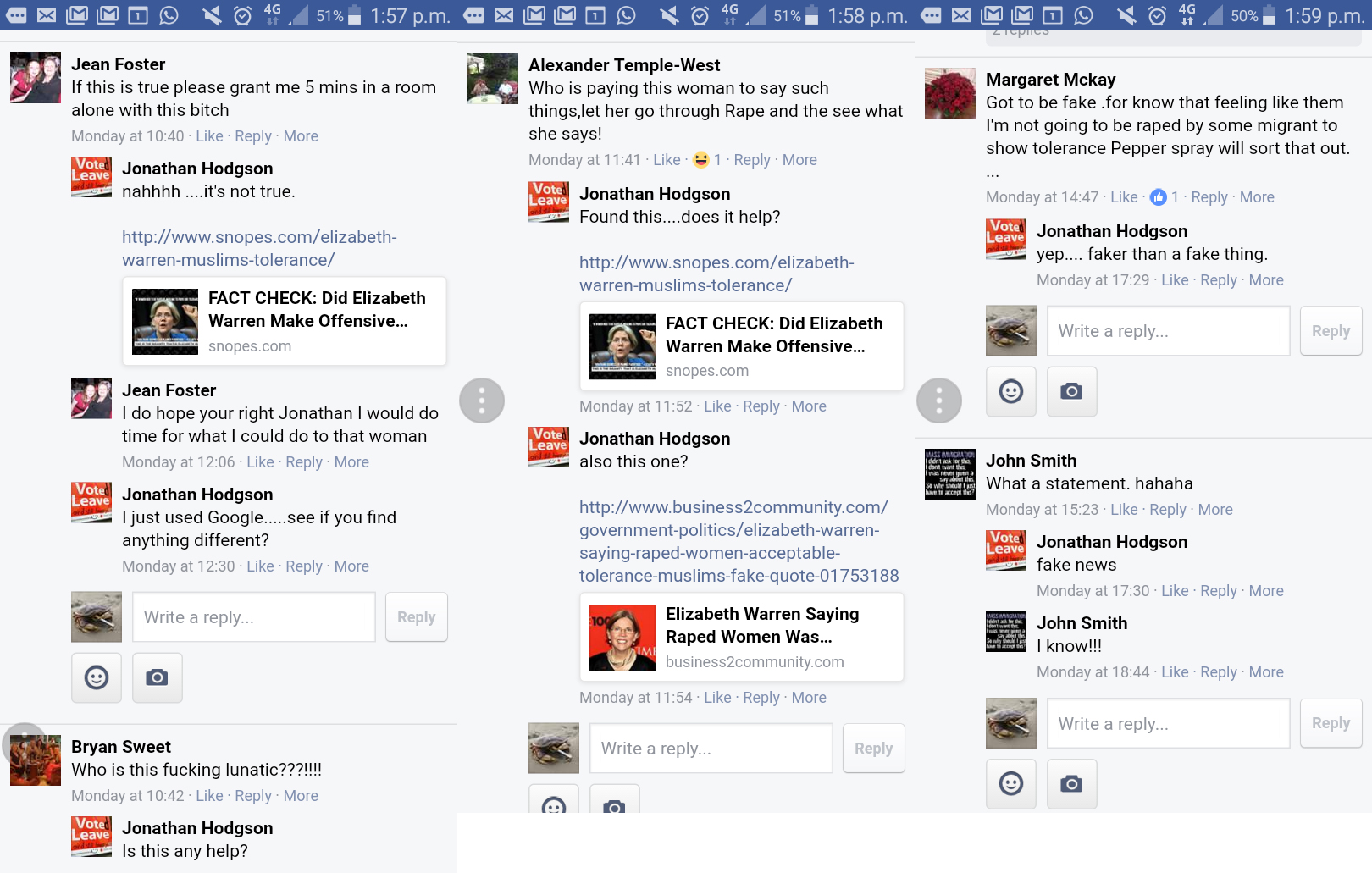 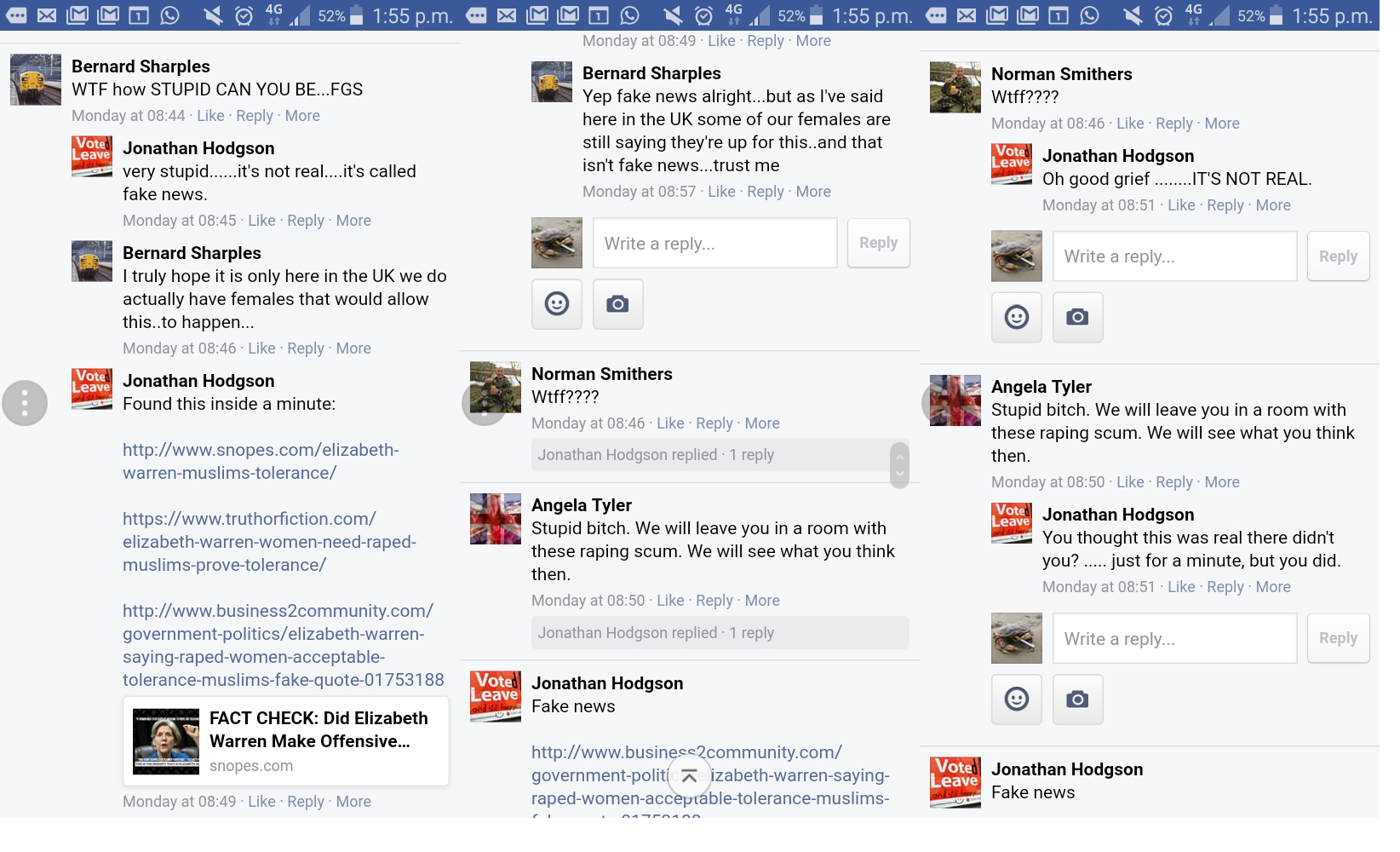 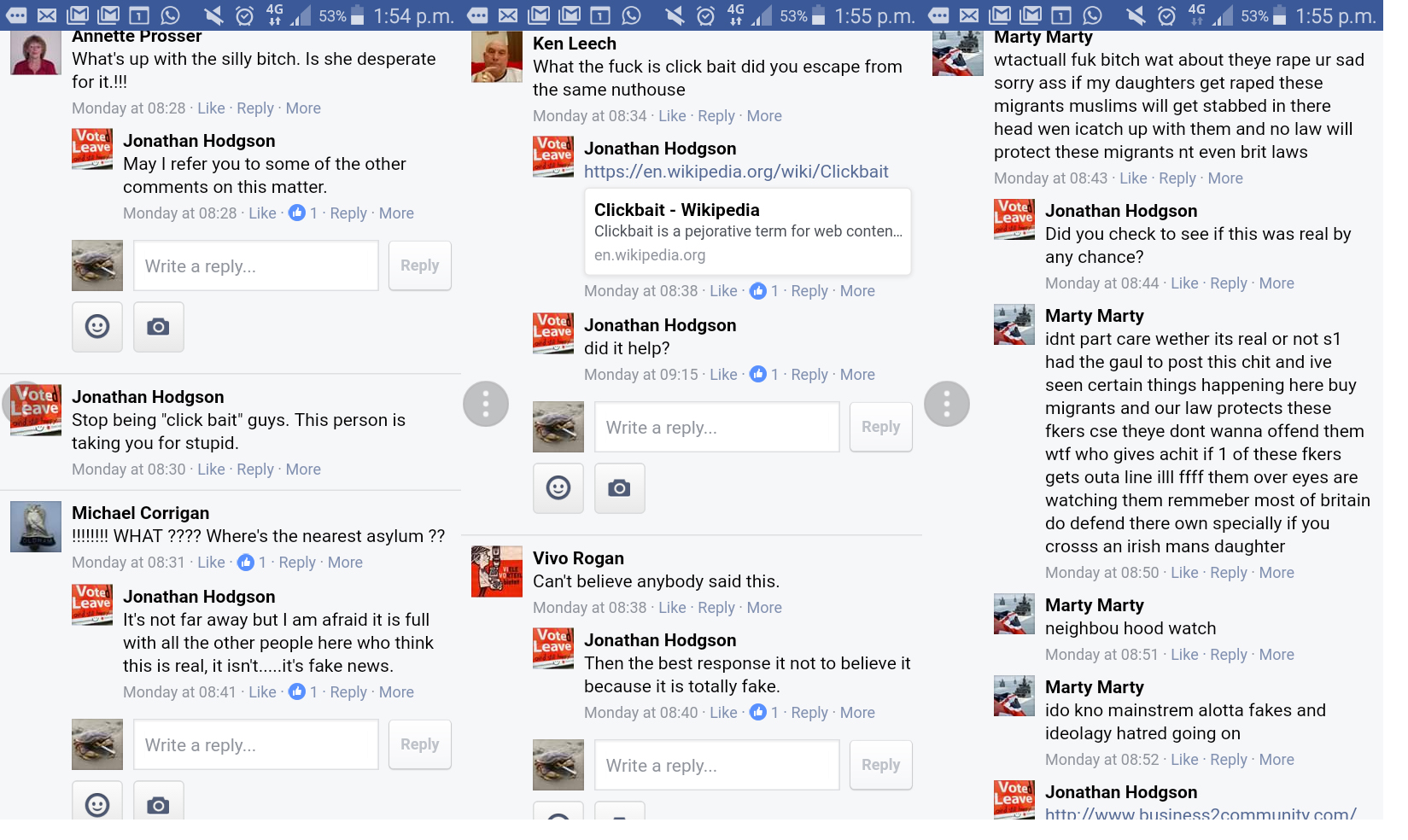 Jesus wept. Still, onwards – next up I doscovered that-

Heartwarmingly, for a group that has some fairly radical approaches to the idea of immigration, I’m happy to report that no one in WWAHB! is any sort of racist or a xenophobe. I know this because they write it lots. Lots and lots. Do you know who is a racist though? Diane Abbott. They’re all pretty 100 on that. In fact, as far as I can see the main role of the group – beyond posting weirdly fawning posts over Donald Trump and his family – is to have a constant frothing, potentially stroke inducing fit about Diane Abbott. FYI Collecting these posts is the most depressing thing I've done in 2017. Thank God none of them are from actual racists. 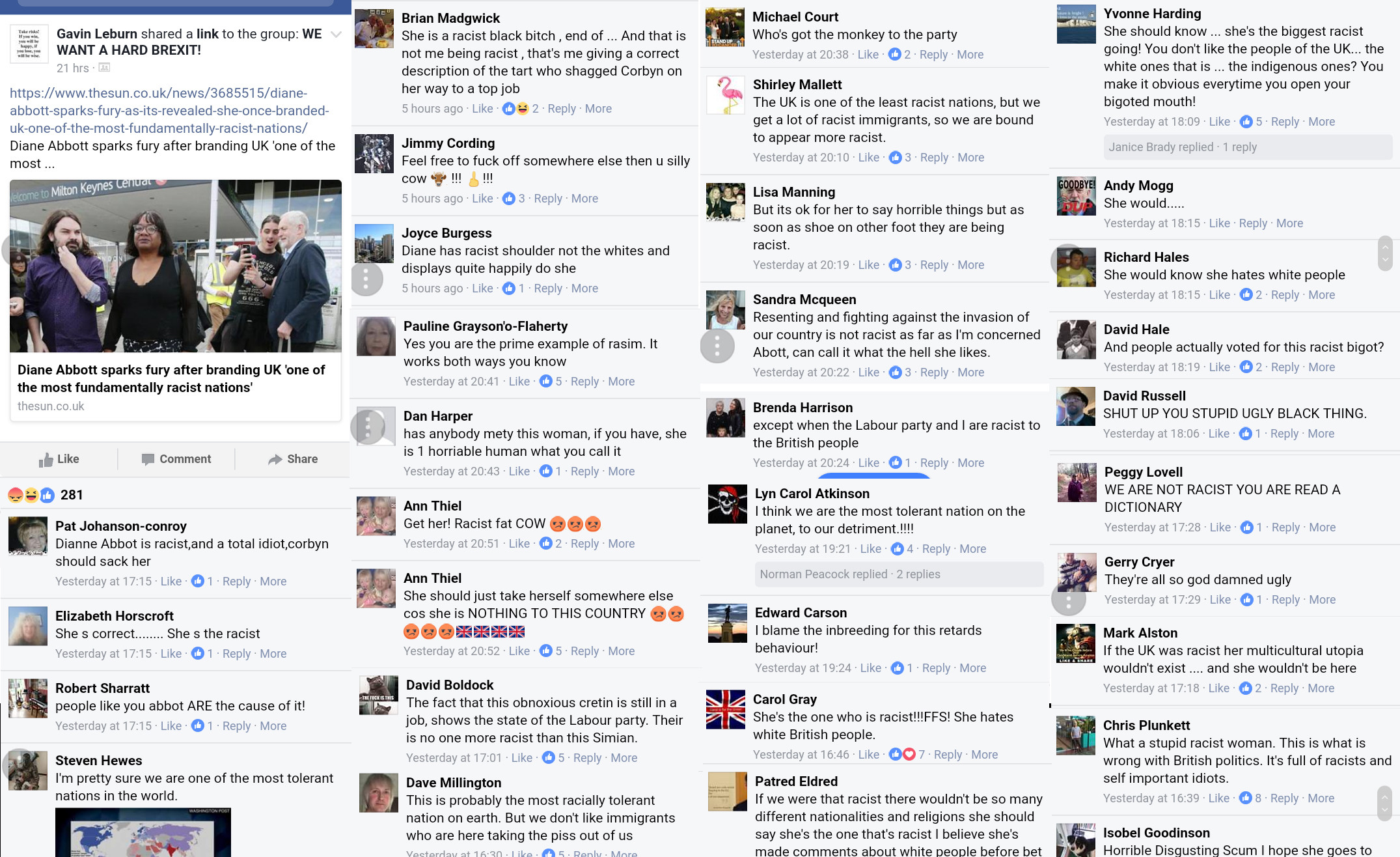 In fact, they hate all politicians (other than Farage, Jacob Rhys-Mogg and Trump obvs)

A huge amount of posts in the WWAHB group are about evil scheming MPs aka TRAITORS trying to SUBVERT the righteous referendum winners in the Leave camp. The hierarchy of who they hate the most gets a bit confusing, but Diane Abbott is number one, followed by Tony Blair, Jeremy Corbyn, Philip Hammond (anti-Brexit SCUM) and – although this one has caused some dispute – Theresa May. Nigel Farage is treated as a seer and a prophet which is pretty good guns for a man who has failed to be elected MP on eight consecutive occasions. The level of Donald Trump love is just plain weird for a group that's meant to be all about Britain (or not at all weird if you believe that there's a very active Russian-bot contingency posting). The only other MP who seems to come out with any sort of support is googly eyed posh nutter Jacob Rhys Mogg. They love him: 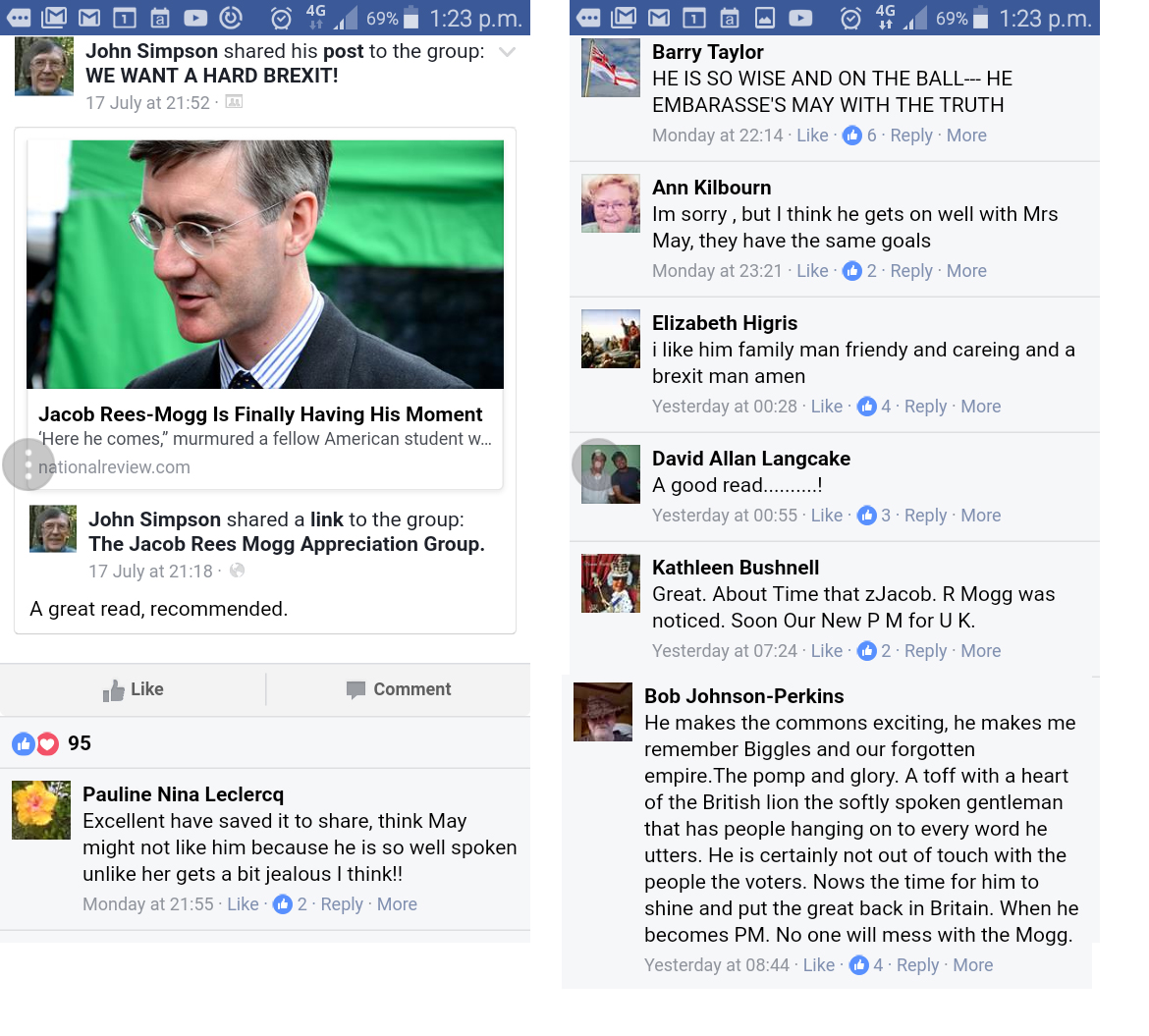 In fact, the only other thing that I can see any evidence of anyone liking is their garden.

I wish I could say that I had my preconceptions challanged by stepping outside my bubble. On the plus side, my timeline became such a mess I've hardly been able to log on, so I can at least recommend joining a Hard Brexit group for curing you of any form of social media addiction. on teh down side, I've spent a month reading the poorly constructed rants of a bunch of bastards. The group has an unslakable thirst for posting Daily Express lies about migrants and fantasising about hate crimes involving Diane Abbott. If they are leading the direction this country goes in, this country is well and truly fucked.

The big problem is, I've got to live in a country with these wingnuts (the ones that aren't Russian bots anyway). I think that in many cases their constant state of hate is a reaction to a life that's given em little reason to love. All I can think of right now is to start flooding the group with starngely loving memes to try and kick off some cognitive dissonance. I'll be back in a month or so to tell you how it's gone. I'm not holding out hope.