Munich, the Bavarian capital and a city with deep rooted history and importance. A European stalwart if you will which has observed a recent surge in forward thinking creativity and expression across a sprawling array of cultural sectors. Music is no different and amidst the beer houses and old buildings you will find a core crew of innovators and characters investing in the progression of eclectic, electronic music in a good, good way.

Monticule are a team of friends and promoters best known for their festival overeas amidst the beautiful French outback. However, it is Munich which they call home and have an undying love for the people and community upon which they are built.

They guide us through the city below…

"Hi, we are Monticule Racing Team from Munich…

In 2015, our group of greenhorn friends, decided to organise a slightly oversized home party with Funktion Ones and international booking on top of a hill somewhere in the deepest depths of the french countryside and called it Monticule Festival. 5 years later the baby has grown a bit. An essential piece of our vision became a reality. Today’s Monticule is our summer camp with benefits — the Monte Verità in the Land of Festivals. All this only happened because of the humans around us and our hometown Munich. Our friends who supported this vision from the very first second with 100% love and you, the most peaceful and lovely festival crowd we’ve seen so far. Expect full dedication and many surprises for our 5th Anniversary. This is our Ransom Note feature about Munich, the hometown of the Monticule family.

Munich is one of the most beautiful cities in Germany. No doubt. And most of us are really happy to live here. Even so the city also has some defects regarding subculture. South Germany has a very strong economy and tough laws. Abandoned places or locations are hardly to find. And if they are found, crews and creative people are starting great things there. But in most cases places are just available for limited time and have no possibility to evolve to unique spots. And if it ever happens, some investors will take over it, because the scene revalued the places.

Maybe you can imagine now how hard it is to find a place for a festival, a club or even a studio here. And Munich is quiet. Very quiet. The people like it quiet and they obviously don’t like loud music. There are hard restrictions on afterhours and you can not even drink a beer in front of a bar after 11pm. Many bars and clubs had to close down because of vigilant neighbours and heavily enforced laws. Munich even gave birth to a new kind of a job – every Bar and Club does not only have a bouncer, they also employ a silencer. His one and only profession is to keep the people in front of the bar quiet. Welcome to munich. As negative all of this may sound to you, it’s in the same way incredible how productive the cites’ subculture is.
All this might sound like the complete opposite of the places you have in mind when it comes techno, house music and german electronic music in general. But, we’re still here for a reason. Even though it sometimes doesn’t look like, we still live in a city with more than 1.5 million people and many individuals and faces. So there are exceptions. Many exceptions.

Munich has a long and really strong history of dance music and was one of the centres during the student movement of 1968. Munich also has a big tradition of gay culture and clubbing. And until today a second look is well worthwhile. So take your time to find the mavericks. There’s many of them. And if you find them, you can have the best time ever here.

The first place we want to mention is a club that closed a few years ago. A place we all deeply miss and that would be the top entry of this feature. It still is, even though it’s not existing anymore. It’s a club called KONG and this place shaped the way we all look at music and culture. It is either the reason a lot of us are DJing or it affected the way we play music at least. And the way we like to party. Monticule Festival is definitely a result of this intimate experience. It all started there. In the backroom of KONG. You can still see the influence of this club in Munich’s nightlife. Many people that played at KONG or worked there are still part of it. And they are still carrying on that spirit. Some individuals of the KONG circle are doing the Blitz Music Club nowadays – an outstanding space. When it’s about sound quality, booking and design they really pushed things to a next level. And this approach defines a lot of what we love about Munich.

In the end we’ve decided to make a list without clubs and venues, but to focus on our favourite places around that…"

Marvin and Valentino, the heads of Public Possession, are part of Munich’s nightlife forever and also held a residency back in the days at KONG. Together with Optimal Record Store, PUBLIC POSSESSION is the best record shop we have and definitely one of the most influencing labels right now. And because of that we are more than happy to see the success of Valentino and Marvin. Beside of playing Monticule several times, they organise instore sessions on Saturdays and offer a homelike place where you can always hang around, drink a beer and listen to some new stuff.

Schwarzer Dackel is definitely one of the best bars we have around here. It's quite new and they serve top-notch drinks without chi-chi for under 10€. They also offer a huge variety of beers and invite great DJs on the weekends. And all this without posh vibes. 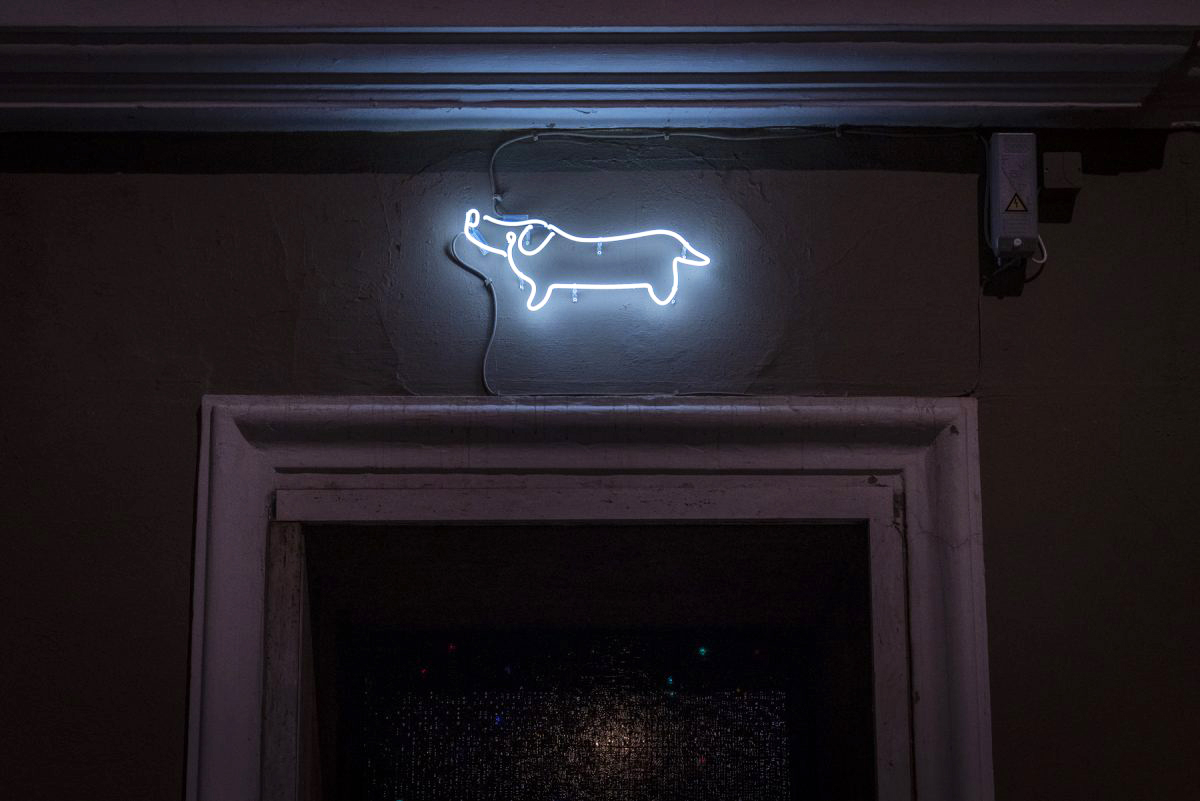 Ok, some imagine Munich as an old, traditional city where everyone is wearing Lederhosen and is member of the conservative party. Well, it’s not that bad, but it’s true: there’s many traditional places. One of the must-go places is Viktualienmarkt. Farmers and local food producers have their stands here and all products are fresher than fresh. Highest quality of food, friendly people and nice atmosphere. Just walk over the market, buy some stuff to cook for dinner, have a Weißbier and have a  nice oven-potato dish at our friends place called Caspar Plautz. Dominik and Theo were also responsible for the fantastic food in the first year of Monticule and now they’re becoming potato-millionaires who run their own stand at Viktualienmarkt – how great is that?! 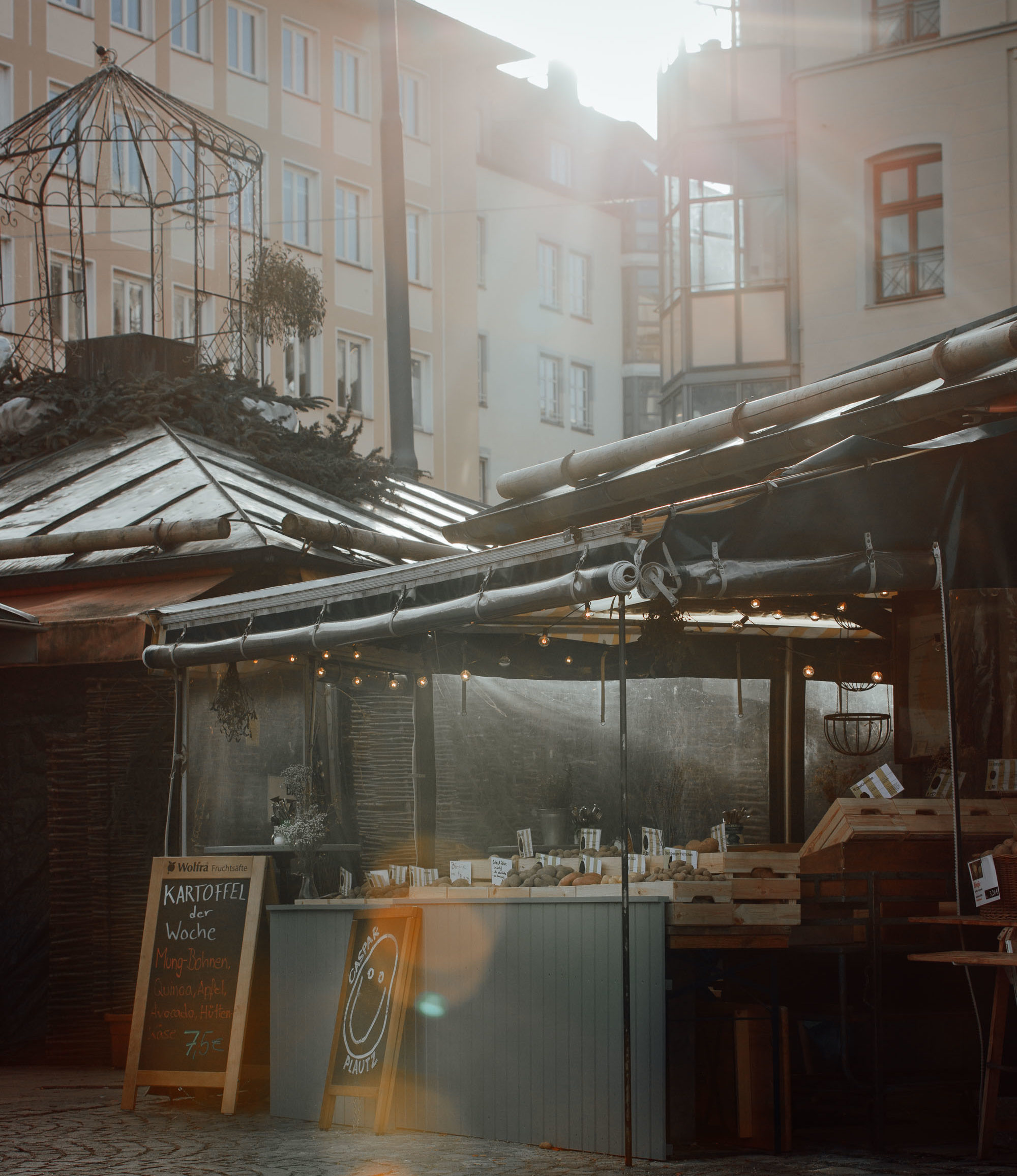 One thing every travel guide writes about is Munich's beautiful nature spots. Stunning mountain lakes and alpine idyll are just a one hour ride away. And our river in the middle of the city. They are fuckin’ right. Period. 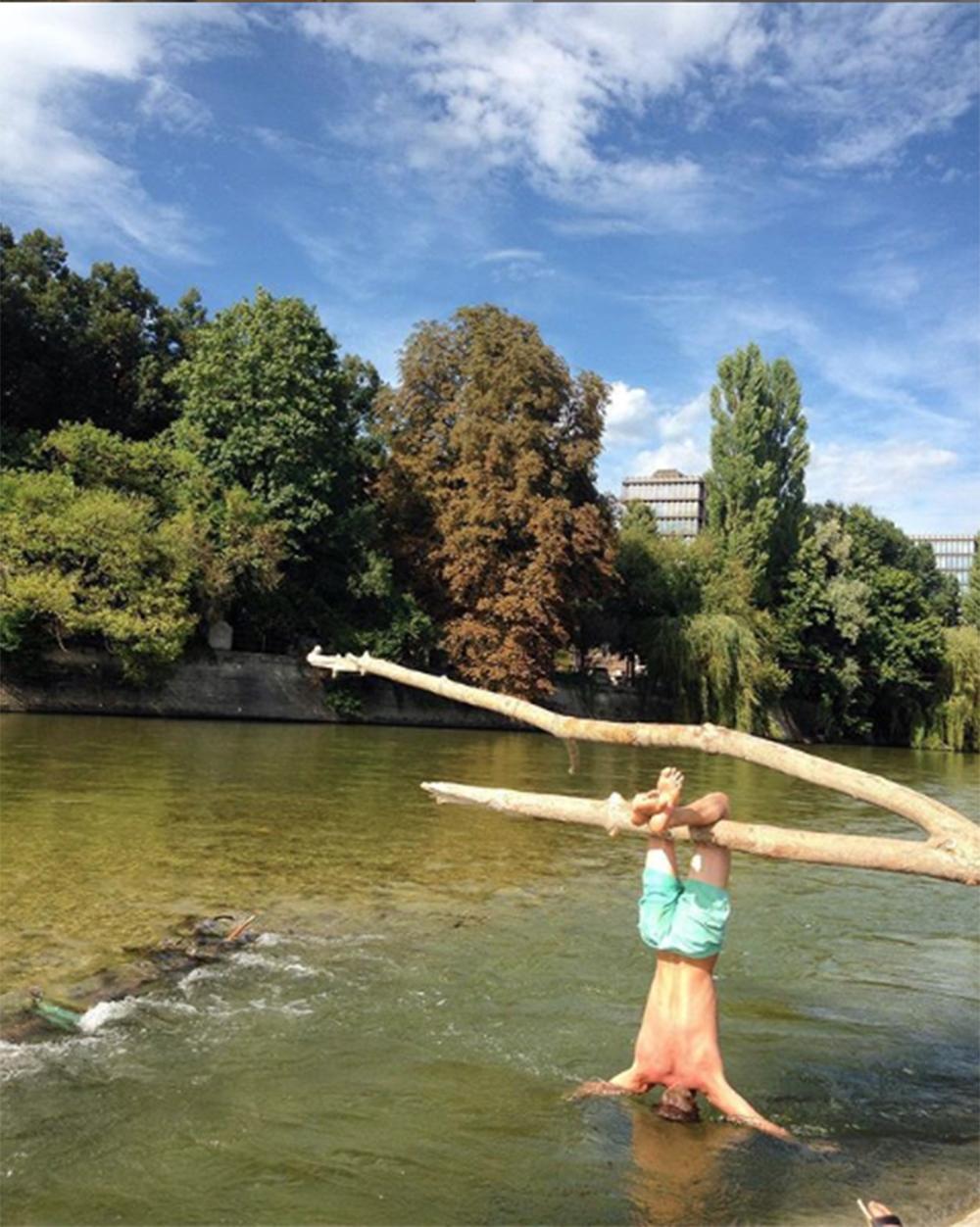 When visiting the independent radio station RADIO 80000 you would not believe that this was Munich. Their studio is part of the Container Collective, a big stack of old shipping containers with studios, ateliers and workshops with many cool people working and hanging there. Felix and Leo are two of the amazing people who run Radio80000 and have for 4 years now, they deliver quality music and quality shows only. Their terrace is one of the best spots for panorama sundowners with great music and drinks. 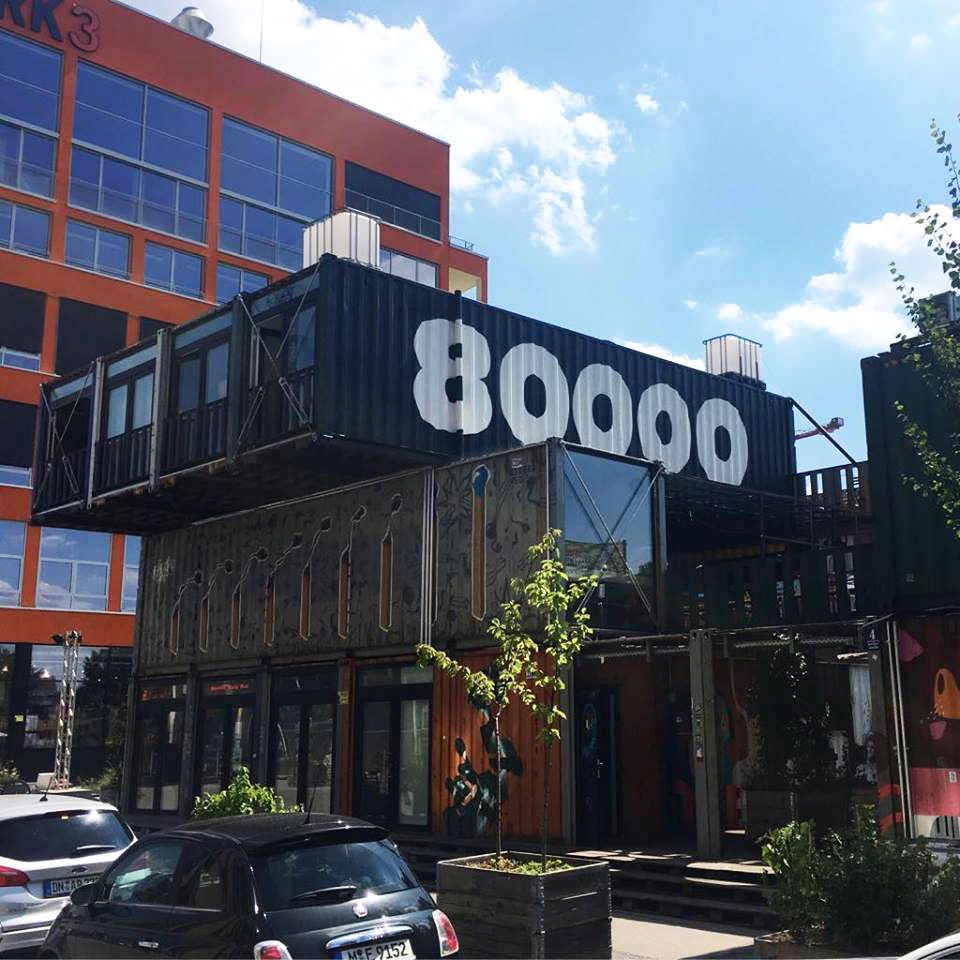 One of the best places in Munich to have dinner. The restaurant is delightful small and cosy. They cook their tasty meals with products from small and local producers only. POLKA is run by Simon’s mom, and Simon is part of Munich’s collective Naiv Studios, who have been responsible for stage design at Monticule since day one. If you’re up for a little drink after your dinner, just head downstairs and hit the bar. 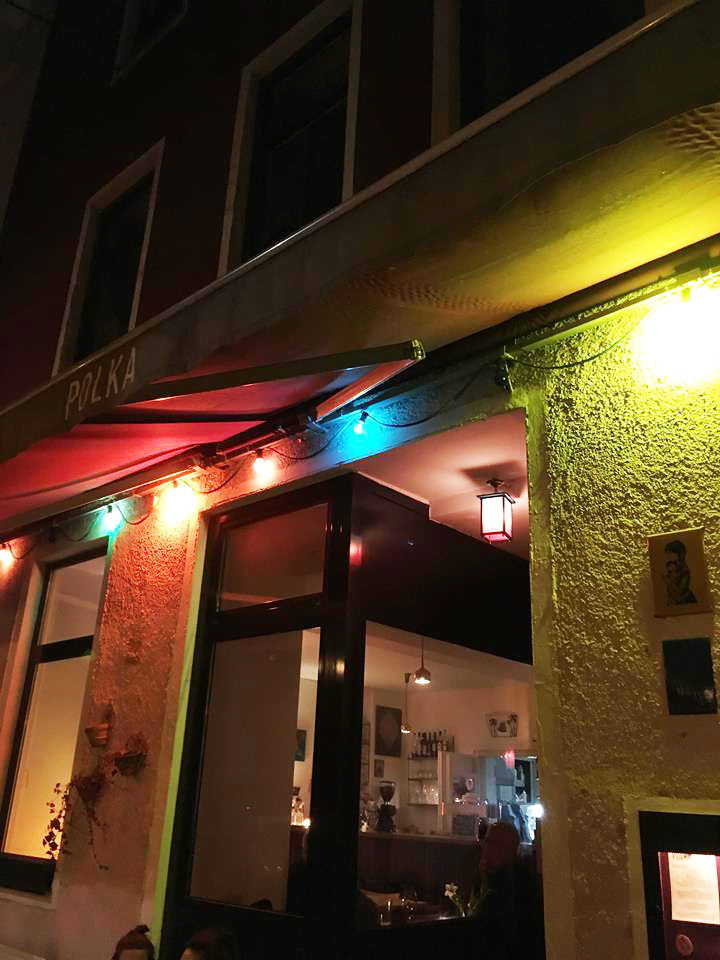