Mention the name James Lavelle – or James Holygoof Lavelle as he used to be known as a teenager, whilst hustling in the clubs and working at Honest Jon’s… You’ll get a clutch of stock responses.

Part of a cyclical, boom n' bust backlash for 20 years or so, Lavelle is still a divisive character, London and beyond.

A record label boss at 18, a millionaire mogul a few years later – he may or may not have made a million when he sold to A&M, but that’s beside the point… The mastermind behind UNKLE, trip-hop and the founding figure behind DJ Shadow and Krush – he ran a label that cared more about vinyl and packaging than any of it's contemporaries and flew the flag for physical formats whilst other imprints were migrating to CD or digital. Personally speaking he was someone who’s pals ranged from Massive Attack to Nigo (A Bathing Ape) whilst working with Nike, Futura and a list of collaborators as long as your arm… 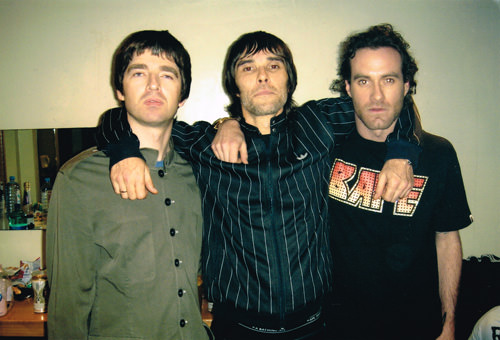 Then there were the rows, the fallouts with the friends he made on the way up, the critical brickbats thrown his way from before the seminal UNKLE album, the cocaine, the near-bankruptcy and profligate spending…

However in the last few years, the tide seems to have turned in favour… The Meltdown festival curated by him was a critical and commercial success, his impeccable taste undimmed which featured a tour de force performance from DJ Harvey as well as everything from Goldie to Edwin Collins, ESG, 23 Skidoo and Mica Levi live scoring Under The Skin.

The accompanying Urban Archeology exhibition and coffee table book meant a further reappraisal of his work.

Then there was the Kubrick exhibition at Somerset House and last year’s UNKLE album, hailed by some as a genuine return to form, less overwrought than predecessors. Now, finally, some two years after it first aired at the London Film Festival, there’s The Man From Mo Wax, a feature length documentary about Lavelle, the seminal label and the history.

It begins with James Lavelle insisting that control is the most important thing about owning and running a label, ironic given that he has ceded that self-same control to others – director Matthew Jones chief among them.

“I’m pleased its coming out and it’s finally got to that point,” says Lavelle ahead of the film’s appearance. “It’s not my film, I didn’t produce it, so I have a slightly different view and distance from it. It was strange for me. If I’d had complete control, it would be a different thing. I’ve taken this weird journey with many twists over a long period. This film took on a life of its own.”

He did steer the film in certain directions after the first cut, but insists that it’s the director’s version of the Mo Wax and James Lavelle story, not necessarily his. “It has the director’s narrative,” he notes, “I’ve sort of made peace with it. It’s not the definitive Mo Wax story, it’s not a definitive documentary of my career, but it has the highs and lows.”

It originally started out as a tour documentary, and grew from there, it is nothing if not brutally honest, particularly dealing with Lavelle’s relationship with DJ Shadow and the recriminations around the release of Psyence Fiction.

“It was quite difficult to watch,” he says. The fact he shares management with Nick Cave, who has been the subject of his own open and entirely truthful documentaries was a factor in swinging his involvement.

“People seem to resonate with the fact there’s honesty with it. There’s something real and raw about it.”

Despite his belief that the film “stands alone as a piece of art”, Lavelle insists that this is just one version of what happened, with plenty omitted.

“In many ways it’s a fan boys’ thing, with DJ Shadow, Mo Wax. It shows Matt’s point of view and his world.”

While he stands by Psyence Fiction, there’s a feeling that UNKLE’s later releases are hard done by, especially when they’re compared purely in terms of volume sales. “With War Stories, a lot of it is not really true. It was financially way more successful [than Psyence Fiction], it was one of the most licensed records of the year. Everyone’s physical sales were decreasing. Things like that slightly bug me.

“People like Paul Bradshaw [Straight No Chaser founder and editor], those records weren’t made for those kind of people.”

Later UNKLE albums featured the likes of Josh Homme, Trent Reznor was proclaiming them as his favourites, Lavelle was a resident at Fabric and more. He expands: “This wasn’t a 90's world, we had a Sasha remix that was huge, Never Never Land became a cult record, it did really well. It became part of culture. There were many other things.”

Where the film succeeds is in the rise of the label, the days of That’s How It Is at Bar Rumba, the legendary Monday night sessions that helped drag the jazz scene into the 21st century and, for a few years, seemed like the centre of the universe. In the days before the smartphone and everything being catalogued, Lavelle’s love of tech – he was picking up state of the art video cameras and more on frequent trips to Japan – helped offer up the kind of footage rarely seen in this kind of project.

After a few releases that were more in the acid jazz mould, things exploded for Lavelle and as he broadened his horizons, so did established labels such as Talking Loud. “The thing I do really like is the first quarter of the film, that early footage. The label evolved. When I started [with the early releases], that was my way in to communicating to people like Gilles. Then it evolved with [DJ Shadow’s] Influx, La Funk Mob and others.”

What the film also lays bare is the backlash against Lavelle, UNKLE and Mo Wax.

“It’s been the bane of my life,” he says. “It’s a very English thing. When we started Psyence Fiction, it was fanfare of joy, by the time it came out it had changed. It was incredibly self-destructive and it was hard to manage and understand. I wasn’t prepared for that kind of negativity in my life. With perspective, it’s what it must be like growing up on social media. But these things lasted for so much longer. Everything is so quick now. It’s been very hard to deal with, there’s been so much negativity over the years. I was only trying to do good things.”

His youth didn’t help, as Lavelle says: “What people sometimes don’t understand is I was very, very young.” He didn’t, he explains, have the experience or nous to deal with the brickbats thrown his way. What he describes as a “laddish, bullying” dance music culture didn’t help. A record business that seemed to be encouraging an excessive lifestyle didn’t help with his own problems. But, as he notes sagely, “I survived."

Now working on new UNKLE material Lavelle sounds excited about life. He’s already made up some of the friendships broken along the way…

As he wryly states near the end of our interview: “What I went through, that’s the rock and roll dream.”

The Man From Mo’Wax is out in selected UK cinemas on 31 August. Fans can also buy tickets and create their own screenings at themanfrommowax.com. It will be released on 10 September as a digital download and limited-edition Blu-ray/DVD via the BFI. A special edition vinyl soundtrack will also be released on 31 August, alongside a CD and download.