Review: Nick Cave & The Bad Seeds At The O2 Arena I wonder if anyone who saw The Birthday Party’s violent live show back in the day could have entertained the notion that their wild, unhinged frontman would one day be headlining arena shows.

On walking around London’s O2 Arena last weekend – All Bar One to the left, vape pen demonstration booth to the right – I was left wishing that Nick Cave & the Bad Seeds had chosen a different venue for this, the last of five UK dates and a gig I had been looking forward to for the entire summer. I knew from reports that the set would be heavy on material from Skeleton Key, Cave’s most recent album. Sombre, grief-stricken and recorded largely in the wake of his teenage son Arthur’s accidental death, these songs would seem suited to a more gentle setting, if suited to being performed at all. But then perhaps the choice of venue was intentional – a way to keep the audience at a distance somehow and allow Cave a layer of protection. Safety in numbers.

It turns out I needn’t have worried. Cave and his band used this soulless, advert-stricken enormodome as the setting for a strikingly intimate performance. More than that in fact – they tapped into the vastness of the space and the sheer mass of bodies to allow an outpouring of collective catharsis quite unlike any other I’ve ever seen at a gig before. No pyrotechnics, no confetti drops – just a group of ferociously talented musicians and one charismatic frontman with the presence and conviction to deliver his timeless songs of love, longing and loss.

Cave follows his band onstage to huge cheers, and sings ‘Anthrocene’ seated on a stool. This is a feint, of sorts – he spends most of the set prowling along the length of the front row, occasionally retreating to rev up his band like some demonic conductor. Two more tracks from Skeleton Key, with Cave making his first forays towards the crowd, and the tone for the night is largely set. As ever, his lyrics are immensely powerful and allusive, and quickly he has the whole audience hanging on his every word. The set design is simple but frequently effective, either amplifying or condensing the stage depending on what is required by the song. 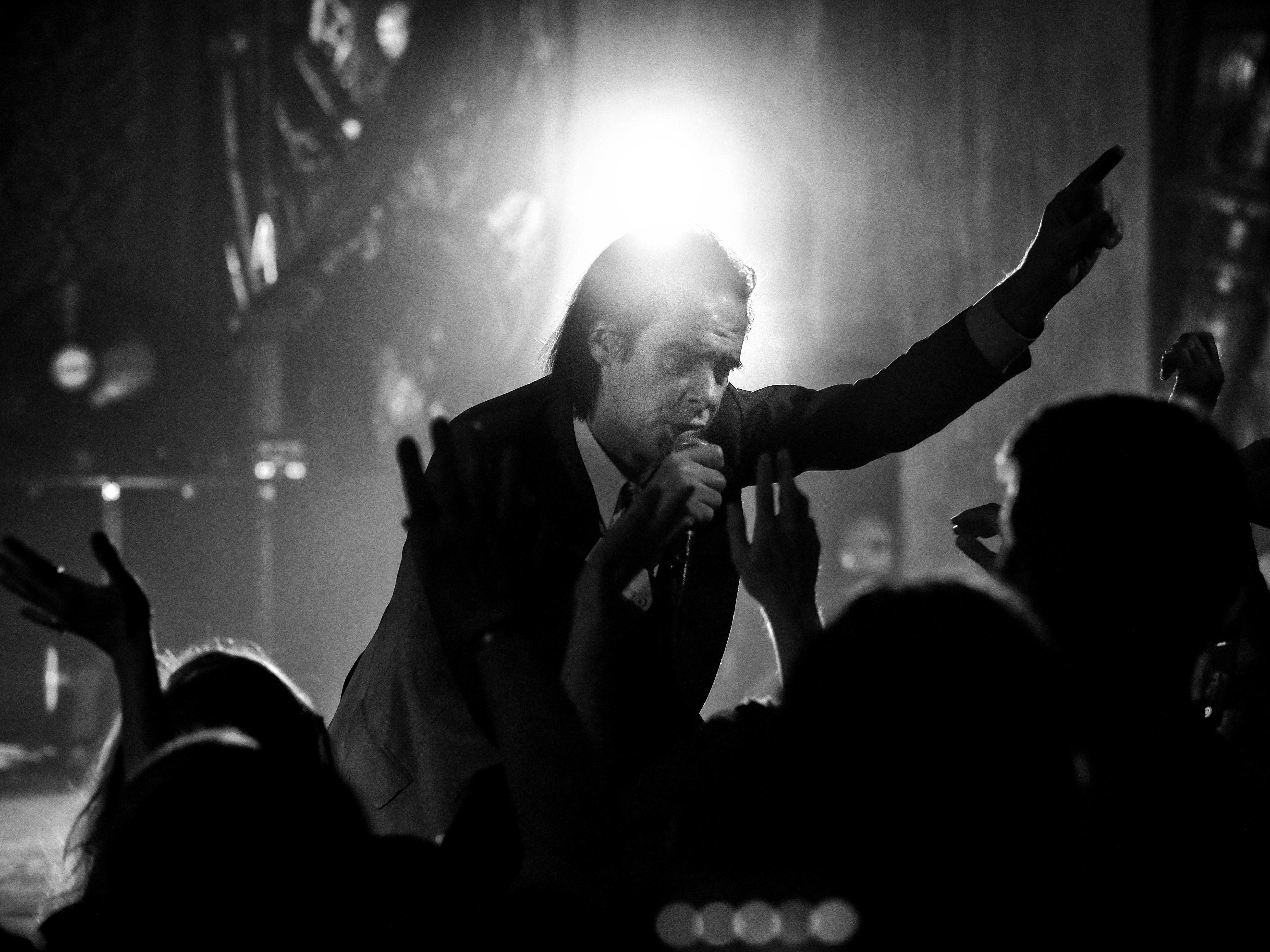 An early salvo of ‘Tupelo’ and ‘From Her To Eternity’ (the most exciting performance of the night) shifts the dial in the other direction and shows that the band can still do gothic post-punk murder blues like nobody else. ‘Red Right Hand’ is similarly snarling, but the real gem tonight is ‘Higgs Boson Blues’, when Cave sings “Can you feel my heart beat?” as he allows a small ocean of hands to place themselves on his chest, and the “Hannah Montana does the African savannah” line gets a wave of laughter that stretches to the back rows.

Indeed, there’s a surprising amount of levity and humour in the room tonight, Cave once again leading the charge. He banters with a security guard tasked with catching him should he fall (“Do you want this job? I’m giving you this job”) and dedicates one song to “my wife, the fox” after a prompt from an audience member. The way he interacts with the front row in a 20,000 person arena and makes everyone feel included is astonishing – it’s like he’s staring deep into someone’s eyes and using them as a cypher for the whole crowd.

The heart of the set comes with a pair of Cave’s most classic love songs. ‘The Ship Song’ brings the room close to tears before ‘Into My Arms’ unleashes the floodgates. It strikes me that, while his performances are frequently described as ‘mystical’, ‘shamanic’ or similar adjectives, the key is perhaps in the restraint. He appears to give everything and yet never quite does – extending his hands before pulling them aside, or altering his cadence towards a crescendo and then curving away again. It’s an effective take on the old ‘always leave ‘em wanting more’ stage credo – he pulls the strange trick of feeling intensely present and yet somehow unknowable. But crucially, whether reciting blood-sodden murder ballads or describing his ‘supermarket queue blues’, Cave is never anything less than utterly gripping.

The encore changes things up a bit as Cave starts to roam the crowd more freely. He even invites a 50-strong band of them up onto the stage for ‘Stagger Lee’, when his natural showmanship is more apparent than ever before. On his final walkabout, Cave comes across Primal Scream’s frontman in the seats. “Fuck! It’s Bobby Gillespie!” comes the all-too human reaction. Not even that – nor the stage invader sporting an ‘I Love Take That’ t-shirt – can puncture the spell. Gillespie looks somewhat bemused on the big screen but gamely joins in with the refrain of ‘Push The Sky Away’, and then that’s it, show’s over. And what a show it was. 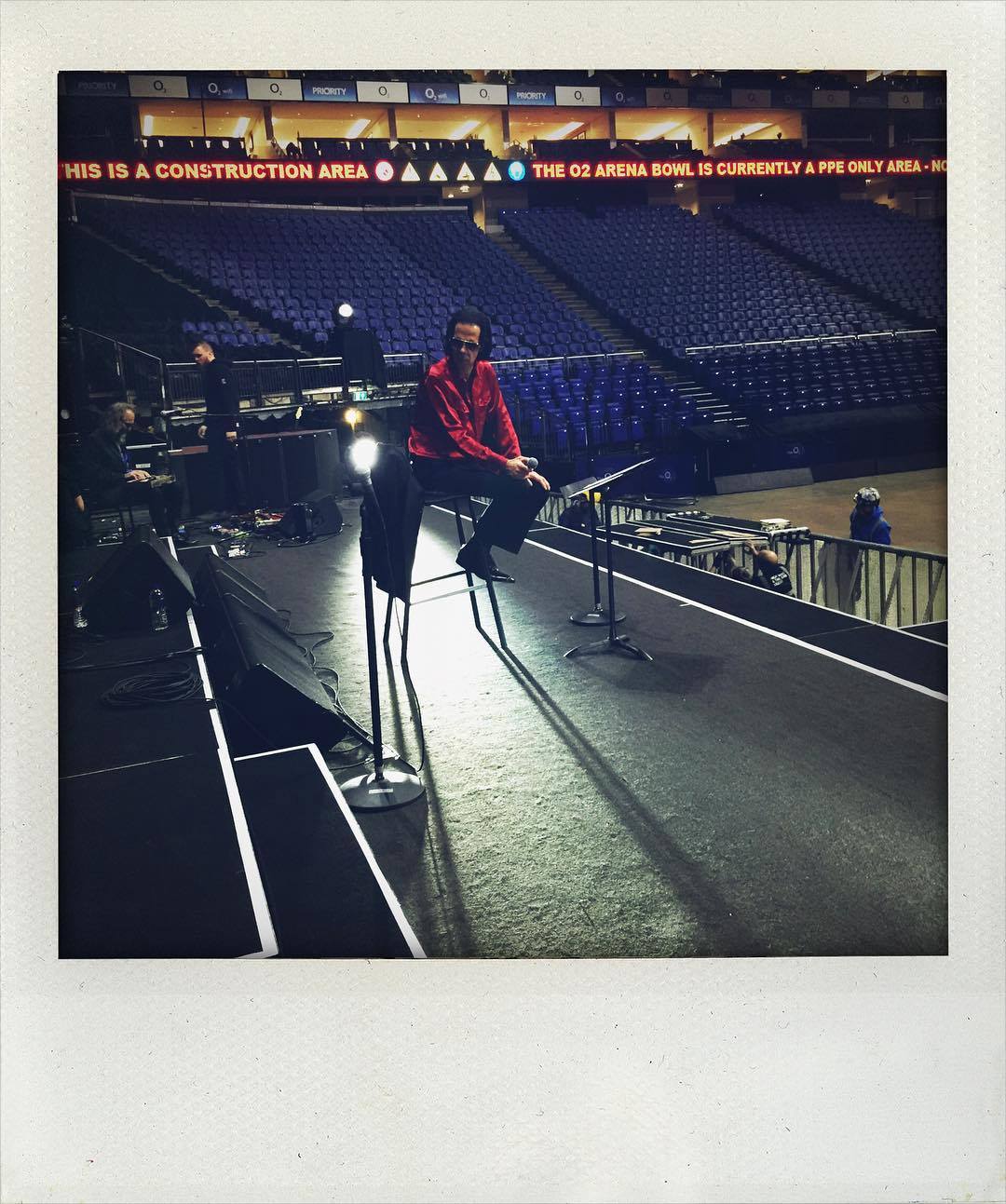