The nation has been mourning the death of film critic Barry Norman. The country’s most recognisable authority on cinema, Norman had the broad taste of a national treasure, as happy to rhapsodise over Star Wars as he was championing the conspiracy theories and class warfare of Mike Leigh’s Naked. The obituaries have been unsurprisingly warm, tributes to a TV mainstay who remained relevant for decades. But I’m guessing most of the obituaries were made by their authors cross-referencing their own memories of Norman’s TV career with a quick scan of Wikipedia, because they all missed out one of the strangest things Barry Norman ever did. They all missed out End Product.

End Product was the young Barry Norman’s third novel. His career has been as a novelist has been largely forgotten, probably because it never really came to any great success. I’ve not read any of his other books; they’ve got potboiler titles like The Matter of Mandrake and The Butterfly Tattoo, and largely appear to be spies-and-shagging romps published in large print format for decrepit readers.

End Product though, sees Barry abandon his b-grade Bond’s to hurtle out into truly radical territory. I first learnt about the novel’s existence whilst digging around in one of those long forgotten internet forums, the posts riddled with broken links like missing teeth. In this forum, God knows which it was, there were whispers that film critic Barry Norman had once authored a strange, satirical work of dystopian sci-fi with a bizarre and monstrous theme. Intrigued, I went investigating. After scrolling through the pages of Norman’s autobiography And Why Not, I found out it was true. In 1975, Quartet Books published End Product, a book Norman thought was unlikely to ever see the light of day. So I found a copy: Yep. That cover shows exactly what you think it does.

Set an unspecified amount of years in Earth’s future, End Product tells of a post-war planet where the globe’s black races have been apparently wiped out following years of racial conflict (known in Norman’s book as the Negro Wars). I say apparently, because instead of wiping out black people, the victorious Aryan races have come up with a grotesque plan. Over the course of a hundred or so years, they have lobotomised black people, rebranded them as ‘ediblacks’, claimed they are a different species to humanity, and proceeded to breed and factory farm them as a supply of meat and organs. In essence they have managed a state of total slavery whilst simultaneously denying that any such slavery exists; they are ‘farming animals’, not enslaving humans. And Norman doesn’t shy away from showing the process of farming humanity in the coldest terms-

‘I think we better start,’ Grayson said, ‘ in the breeding complex.’

He took them into a rectangular building… In these rooms, lying on wooden litters covered with washable sheets of plastic, were row upon row of female ediblacks in various stages of giving birth.

Brisk efficient attendants, men and women in white over-alls, patrolled between the rows, charting the progress of every birth and stamping the newborn black with a number. For this they used a small hand operated device that tattooed a row of figures on each tiny black thigh.

‘Neat little gadget, that,’ said Grayson…. He looked on thoughtfully as another batch was rapidly stamped. ‘Not exactly painless, of course. I dare say a human being might find it quite agonizing. Still. Where there’s no sense… as they say.’

The book follows the story of Wendy, the daughter of a cabinet minister, casually visiting one of the massive ’free range’ ediblack farms in Africa, only to come to the disturbing realisation that the ‘animals’ are in fact savagely abused humans.  As we watch her doomed attempts to convince those around her that some terrible crime is being perpetrated, she enters into a spiralling breakdown, treated as a silly girl, a dangerous radical, and finally a raving lunatic by those around her. It doesn’t matter what she says; a lone, ineffectual voice shouting at a monolith, she’s Winston Smith insisting that two and two make four in a world that has wholly accepted it is five.

As End Product lurches on from one unsavoury scene of global cannibalism to the next, Norman twists the knife. He introduces a scientist called Colliman who has seen a glittering career cut short after protesting the same thing that Wendy did – that the world is caught in the grip of a lie. Instead of murdering this scientist for his dangerous realisation, the British government reward him with a lifetime tenure spent stuck in the middle of nowhere. There’s an exchange between Colliman and an agent of the crown that sees Norman painting the British establishment at its most blandly cynical; a passive aggressive monster that stifles with polite menace-

’How many others have there been like me or that girl?’ Colliman asked.

‘Over the years. Oh quite a few… yes, there’ve been several others at one time or another’

‘And what happened to them?’

‘They were dealt with.’

Addison shook his head contemptuously. ‘That’s not our way, the British way. You should know that.’

‘No of course not. It was silly of me. You simply offer impossible alternatives, don’t you?’

‘Not always. Sometimes we offer jobs instead.’

‘Yes. It’s always been the great strength of the British Establishment that it can disarm it’s opponents by turning the other cheek. There’s no need for purges here, is there?’

‘No,’ Addison said. ‘It’s a pity other countries haven’t learnt the trick. It’s so much nicer our way.’

As a startlingly vicious satire on racist ideology – packed with shots aimed at a patrician establishment that treats its population with cynicism and contempt – End Product is riddled with uncomfortable ideas that remain relevant. The ease with which a whole element of humanity has its humanity revoked by the dominant class is as applicable now as it ever has been; we live in a time where refugees and third world workers alike are treated as disposable infra-humans. It doesn’t seem too much of a leap to imagine that we’re one global food shortage from sanctioned cannibalism – and we’ve already got cracking on the organ harvesting.

Still, there’s one good reason for End Product’s obscurity; it’s slightly crap in execution. The dialogue is lumbering, the thriller elements are plodding. It’s not exactly Fahrenheit 451. To a modern reader, there are eyebrows raised at the way Norman relegates the subjugated Africans in the book to the role of a kind of brutalised and savage backdrop whose only available champion is that most ineffectual of creatures, the bleeding hearted white liberal. And –spoiler alert!- the books conclusion where Wendy is raped and murdered by a mob of ediblacks she believed will respond to kindness – can be read in all sorts of ways, some of them intriguing, some of them dubious –we’ll now never know which Barry meant.

Still, it’s remarkable that End Product was written at all, and as dystopian sci-fi goes, it deserves more recognition. Even if it isn’t the Swiftian classic Norman was hoping for (he quotes from Swift’s A Modest Proposal in the closing notes) it is, at least an unusual and intriguing work – kind of a prototype, un-PC version of Black Mirror

So why did Barry Norman – a comfortably middle class conservative who was then writing a column for the Daily Mail – decide to write a savage attack pushing racism to its logical end point? In the 70s, his fellow conservatives were calling for Nelson Mandela to be hung as a terrorist. But Norman had actually experienced South Africa on day to day basis, and was open minded enough to have his prejudices uprooted. Having gone to the country as a young, public school educated journalist, he had originally swallowed the ideology of apartheid wholeheartedly. But in his time working there, meeting black South African’s and reporting on court cases that showed a system riddled with bias masquerading as science, he swiftly grew to view apartheid as a crime against humanity. His breaking point came when reporting on two rape cases, as he reports in his autobiography: 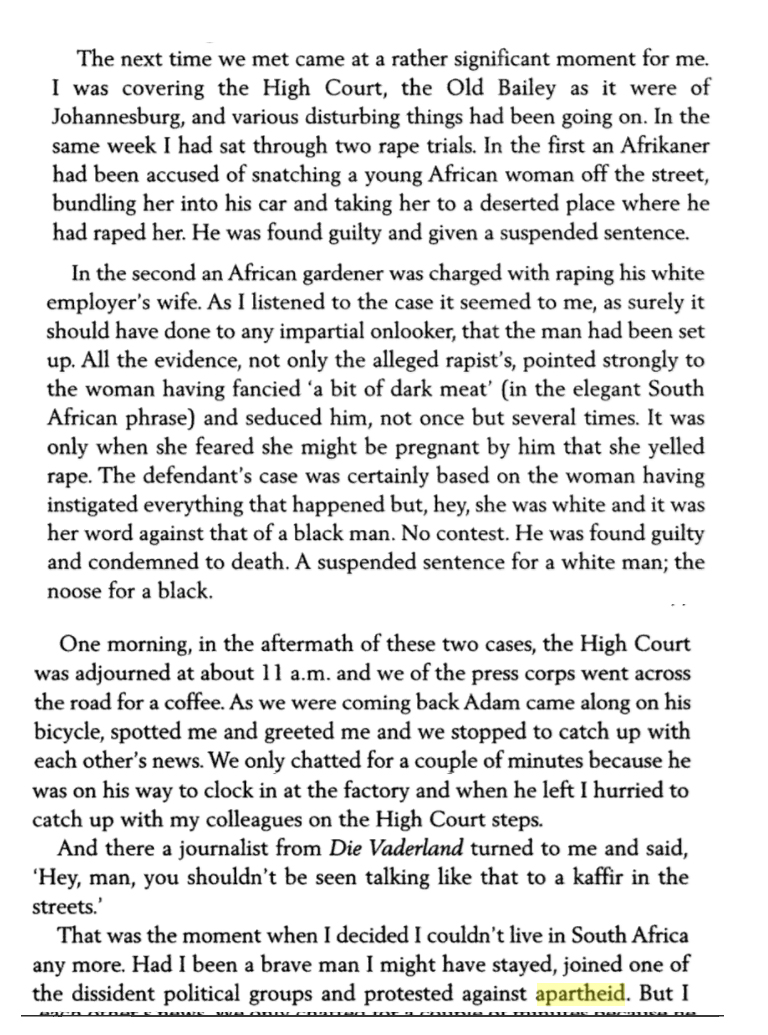 So there you have it. Years before Jeremy Corbyn was getting nicked outside parliament, Barry Norman- Daily Mail columnist, establishment favourite and BBC mainstay- became one of Britain’s least likely campaigners against apartheid. As he might say, and why not…?