The future of vinyl is not just guaranteed, it’s necessary.

ADE 2018 had the biggest turnout yet; over 400,000 visitors from 100 different countries journeyed to the Dutch capital. For 23 years (and counting) Amsterdam has played host to what is now, without doubt, the largest music conference-turned-festival of its kind.  The weeklong event boasts stratospheric line-ups, cutting edge tech demos, inspiring industry debates and a tonne of electronic music diversity.

Digital technology has unquestionably played a fundamental role in the event’s increasing popularity and global significance." The hardware/software giants use the platform to showcase and demo their latest innovative products. But underneath this swirling tide of tech, the city is electrified in other ways.

Hosting intimate talks, in-store sessions with legends and locals alike, and collaborating on some of the larger scale events, the record stores form a vital foundation to the wider whole - their importance extending far beyond the 7 days of ADE.

Over the last decade Amsterdam has built quite a reputation on the global EDM circuit, praised for its vibrant music culture and pioneering attitude towards nighttime economy. A place where music and the arts are encouraged, not sidelined. Dam was also the first to appoint the crucial ‘Night Mayor’ initiative - opening up dialogues between venues, promoters, residents and public officials - a blueprint so affective it would go on to be imitated by a number of major cities around the world.

Amsterdam then, is very much at the forefront of EDM culture. The ongoing success of ADE, made possible via the country’s open-minded approach to music policy, being evident of such. So by looking at it’s record stores, those who visit them, and the relationships they forge, a surprising vision of the music industry’s future can be revealed.

Time to address the elephant in the room: streaming. Ultra accessible, super convenient and financially economical. The TV landscape has been dramatically and irreversibly altered by the emergence of such technology, with the music industry tailing not too far behind. Platforms like Tidal and Spotify have seen an exponential increase in subscribers per annum. And recent commentaries all point to a shift away from mere listening and into the realms of DJ culture.

However, vinyl has built up some impressive figures of its own; 7.6 million records were sold in the US alone during the first half of 2018 and Forbes (as well as dedicating a whole editorial section to the format) highlights a 260% growth since 2009. Any doubts over the legitimacy of the format’s comeback - with terms like ‘fad’ and ‘gimmick’ being thrown around in the resurgence’s early days - can probably be laid to rest.

Now stats and figures are a good point of reference but do little to describe the complex social interactions happening on the ground. To really understand vinyl’s growing relevance (and necessity) in a post-digital world, you need to speak to those that live and breathe it.

Like most of Amsterdam’s international population, Zwart Goud store owner and Istanbul native Ilker was drawn to the city’s cooperative mentality: “It’s the perfect melting pot. A collective culture. We are only a little store, a dot on the page of the book, but there’s a bigger picture that we’re all apart of. The EDM industry is a million (maybe billion) euro asset to the Netherlands”. 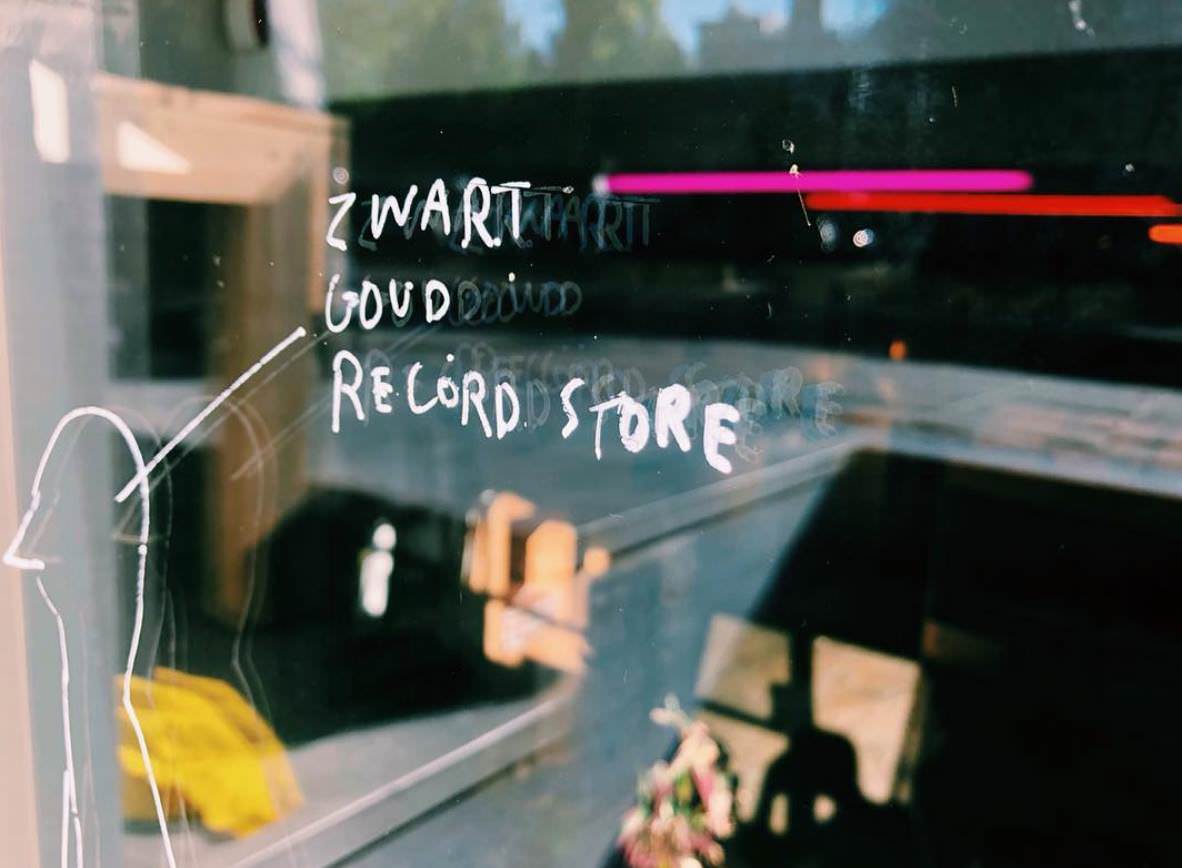 Most striking about the stores in particular is the way they communicate with one another. Everything unfolds with transparency, collaborating rather than competing, each exploiting their own unique niche. Zwart Goud stocks a wealth of rare Turkish records, avant-garde electro and micro house, while other haunts in the city claim further less popularised genres like Italo-Disco, Japanese Post-Rock, Zouk and so on.

While business in the stores is exacerbated by the influx of ADE patrons, they see a healthy amount of footfall throughout the year too. This extends through to the regulars, tourists, and those who actively contribute, as Colin of Bordello a Parigi (having followed his other half from Brussels) explains. “We get customers from all over the world and sometimes they even drop by with their own releases. They come in with their records, their dub plates and if we like it, we take it. We build relationships and collaborations that wouldn’t usually happen”. 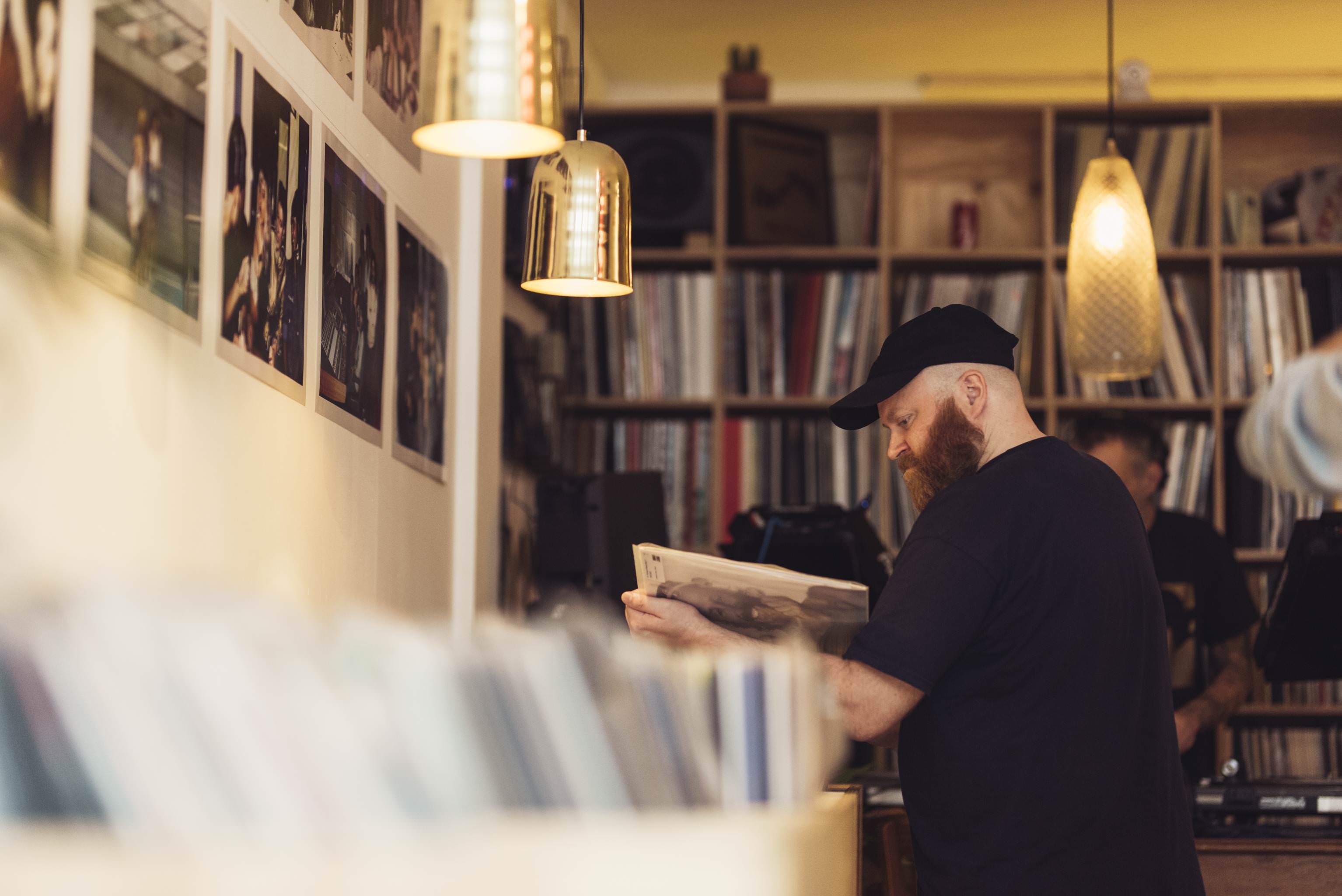 Image courtesy of Tim Buiting, taken at Bordello A Parigi.

Along with stocking and supporting each others labels, this growing DIY presence is perhaps most telling of vinyl’s future. Limited pressings, one time edits, and vinyl only releases are abundant in the city. A gold mine for collectors and a key draw for any budding DJ looking to transcend the void of saturation.

The dedicated selector is always looking for new methods to stand out. And what better way to grab the attention of your peers than by having a wealth of new, innovative music at your fingertips. Tracks that can’t simply be shazammed, downloaded, or (with time on your side) bought.
The importance of the social aspect, that the physical record store represents, is also not to be ignored. A facebook message or email can quickly become lost in a swirling mass of data, but catch your hero face to face in a record store and suddenly the dynamic changes. Of course this scenario is at the extreme end of the spectrum… but not beyond the realms of possibility. As echoed in Colin’s earlier sentiments, by simply talking and mixing with like-minded music heads, potential collaborations are inherently likely.

These are not simply ‘stores’ then. They’re extensive often exclusive music libraries, social-network hubs, and vessels for digital (soon to be streaming) counter-culture. In the words of DJ Pierre himself, “record stores are the true underground”.

There’s truth to Pierre’s statement too - which came about in one appropriately titled ADE discussion ‘What is the Underground?” - as entire music scenes continue to hold and develop a strong affinity with the vinyl format. DJ/producer Goosensei is one such artist, inspired by Dubstep pioneers like Mala, Kahn and Foamplate who still play strictly vinyl sets. He notes how vinyl has “always had a strong place in certain genres” and regularly presses his own releases to one-off dubplates.

The elusive Rominimal scene, despite having recently come to the attention of the global circuit, continues to operate in relative obscurity fuelled by the it’s approach to music distribution. Key figures like Raresh and Ricardo Villalobos still favouring the turntable, their releases sporadic and pressed to vinyl in limited quantities.

As a result, many stores share an intimate relationship to such underground music, scenes and DJs. Not only a space to dig and network but also a unique backdrop for small-scale events; Mary Go Wild’s immensely sweaty but perilously fun secret basement raves come to mind. 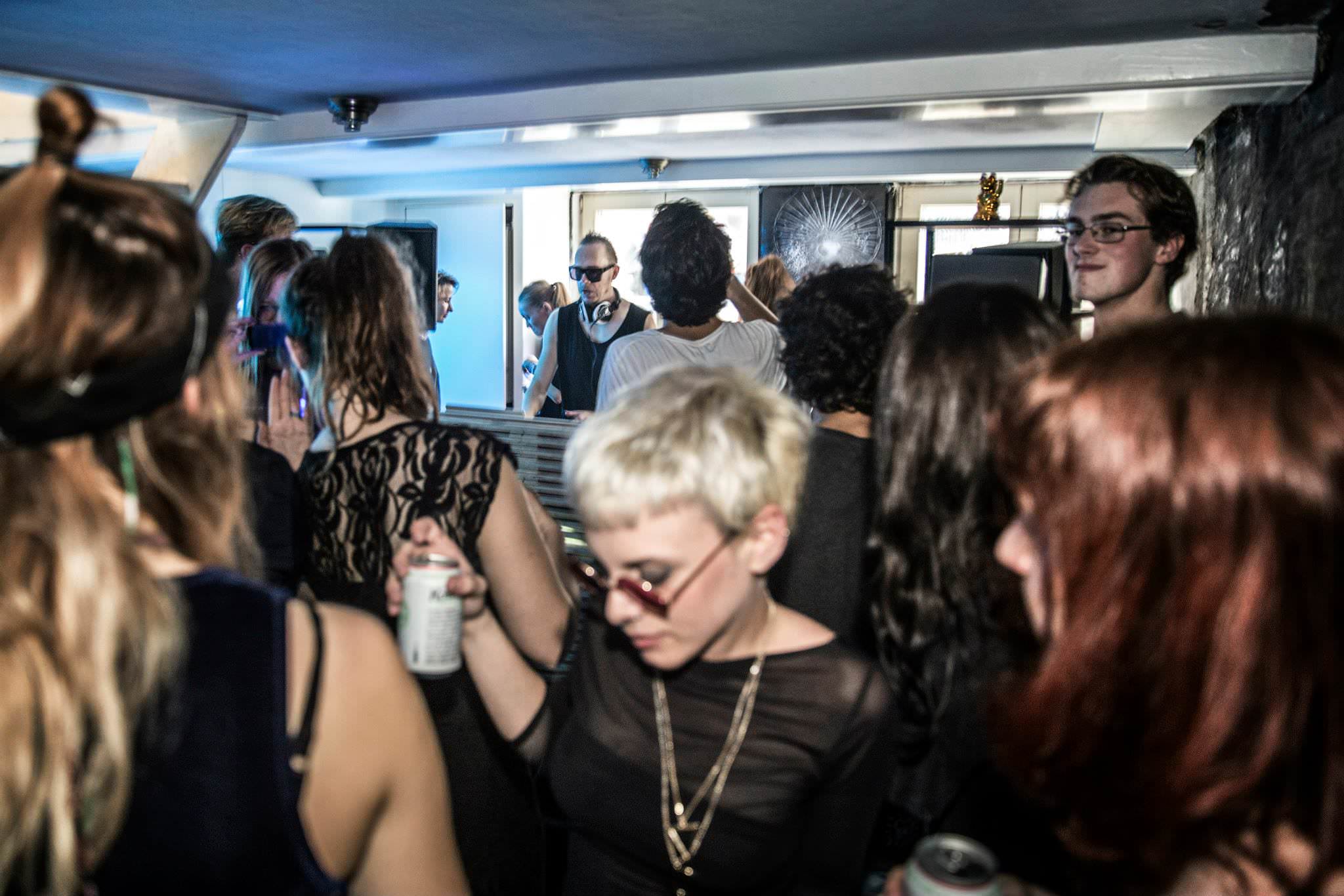 While a thriving vinyl movement is certainly not exclusive to Amsterdam, the city does present a convincing snapshot of just how integral vinyl remains to the underground/mainstream dichotomy.

The underground needs a mainstream and a counter-culture needs a culture; as the music industry spirals deeper into its own tech-centric future, ever-more pockets of resistance retroactively seek out solace in the ‘original’, the ‘classic’ and the ‘old skool’.

For the (growing) music industry minority the novelty of a tech revolution seems to be wearing off. Overwhelmed by the ubiquity of social media, the infinite data mines of digital music, the never-ending trajectory of streaming services, there’s a rightful yearning for the tangible again. But vinyl is not just a gateway to the past, it’s surprising resurgence has now tethered it to the foreseeable future.

Take Yamaha’s latest VINYL 500 turntable, a hybrid device that allows both the playing of traditional records and wireless streaming on a number of popular platforms. While vinyl may never rule as the dominant format again, it’s place as a music (and format) counter-culture and streaming collaborator is all but fixed. In fact, this intersection of vinyl and streaming is already more than commonplace.

Rare or scarce records are routinely uploaded - in questionable degrees of quality - to YouTube. Some anonymously with helpful links to Discogs sellers (a rapidly expanding online vinyl/CD/tape marketplace for the layman), others by the independent labels themselves. In the latter instance information about the label’s base and/or stockists are also present. Through the mediation of streaming a gateway to the vinyl underworld can reveal itself.

In this dimension everything is somewhat backwards. Fewer streams or views become a draw rather than a deterrent. A giveaway signal of a track’s obscurity; an enticing trait to the hardcore crate digger. Most record stores too will have some form of online presence, teasing upcoming releases with snippets of audio and eye-catching sleeve art. And in the vein of Boiler Room, video streams of secret or intimate cap vinyl in-stores can be a wondrous marketing strategy. In other words, less is more.

By subtly embracing stream-tech rather than refuting it, the scenes, people, and places of the vinyl counter-culture manage to remain current, musically innovative and underground.

Sure, you could create high quality digital rips of all your vinyl and share it to the world. But why? At the click of a mouse all those days, weeks, months, maybe even years of meticulous searching would come undone. Leaked into the online ether to be duplicated and distributed an infinite amount of times with no understanding of its temporal context. Suddenly a total banger that only you and 99 others owned is a total banger everyone owns. This delicate, unspoken understanding of ownership is central to the community ideology that vinyl so deeply relies on.

As streaming and vinyl continue to intertwine the music industry is experiencing the best of both worlds: convenience of the future meets humanity of the past.

The music consumer is veering closer to an existence without adventure; a place where tunes are divvied out in endless portions at the tap of a space bar and taste dictated by an algorithm. Instead, like the record stores of Amsterdam (and the world over), cling to something tangible, unique. Save a piece of yourself and encourage others around you to do the same.

When ADE, one of the most forward-thinking, tech dominated music conferences in the world, is hosting talks on “The Future of Vinyl” - it’s probably about time to take some notice.

* Thanks to Bordello A Parigi, Zwart Goud and Mary Go Wild for allowing us the use of their imagery and pictures.