The return of the debate, who wants some?

The return of the debate, who wants some?

So here we go again. Someone tells the story of early house music, and guess what: a load of people get pissed off they weren’t mentioned in it, and a load of their fans get even more pissed off on their behalf.

BBC4’s “Can You Feel It - How Dance Music Conquered The World” gave us this latest bout of Groundhog Day where Mancs berate Londoners for not being as clued up as they think they are, and then the rest of the north chips in and says “fuck London, but fuck Manchester as well while you’re at it... we were onto it before they were, and by the way, no one really went to the Hacienda until 1988 anyway”.

Were the questionable assertions made in this documentary a classic case of a London-centric, NME-reading media giving us a lazy narrative of club culture?

Was the ensuing debate hijacked by people talking the same old shite on social media?

The answer to both of these questions is ‘yes, kind of’, so if you don’t have the time to properly engage with the argument then you can stop reading now and spend your time doing something else online. Maybe you could download some music illegally, or hell, you could stream it legally instead (but haven’t you heard: artists don’t get paid very much for this either). Perhaps you could then debate this irrationally on social media.

I will say now that I actually enjoyed the documentary on the whole, but alongside the rest of the north of England I revolted at the notion that Pete Tong was the catalyst for the house and techno scenes in the UK. At that moment I knew it would be online armageddon, and sure enough, once I’d slept off the weekend I awoke to find myself tagged in various threads discussing it, one of which descended from this Mike Pickering tweet: 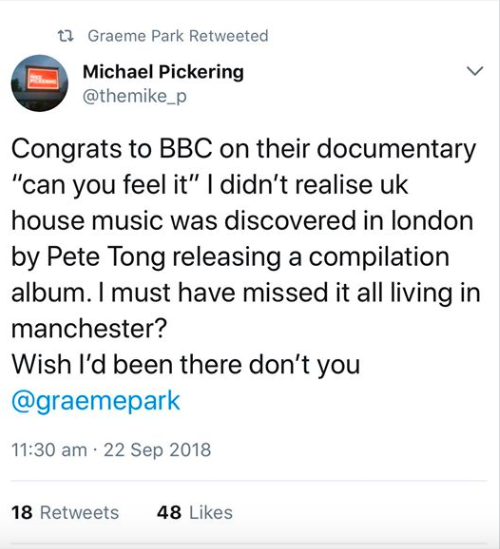 An excellent and understandably incredulous response, but alas, it also spawned a proliferation of nonsense from J. Public. As much as I hate the tribalism of “my city’s better than yours”, “my scene’s better than yours” etc., what pisses me off even more is the constant failure of the human race to use history properly. The BBC, Londoners, Mancs, western governments when trying to justify foreign policy… they’re all at it.

For the tape, this is what the documentary actually said on the matter:

“The 4/4 beat that had started in disco was revolutionised in Chicago house and Detroit techno. But it may have remained rooted there as a cool but small black music scene if it wasn’t for a chance discovery by a British record label scout [Pete Tong].

“In 1986 Pete Tong put together the album that introduced Chicago house to British music fans.”

It’s just a load of bollocks isn’t it? I mean where do you start? My own offence started with the conflation of house and techno. Having spent the last few months researching and interviewing people for a book on techno history, at no point did I find anyone saying that Pete Tong first brought techno to the UK (a quick google of the name “Neil Rushton” will provide a better explanation of the techno journey).

And then of course there is the assertion that the global house-music boom was down to the ‘chance discovery’ of one man in London. To be fair to the BBC, one of their interviewees, Farley Jackmaster Funk had already stated: “Without Pete Tong, we wouldn’t have had house music overseas - it just wouldn’t have happened.” (Although the fact he delivered this from a throne whilst sporting a crown and sunglasses could maybe have offered some clues as to the reliability of the witness.) 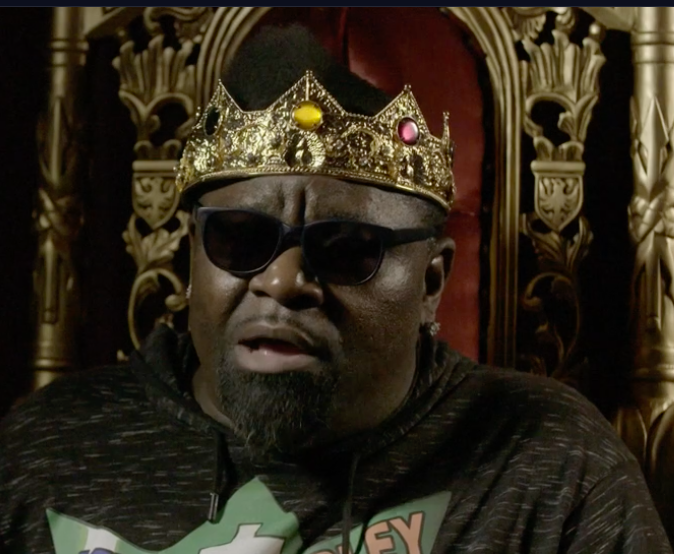 Anyway, it’s no exaggeration that Pete Tong was a great A & R man who got onto house music early and sold it brilliantly to the British public in the mid-80s and for decades afterwards. He is deservedly lauded for it, but it’s absolute folly to place so much emphasis on one person for the spread of an international counter-culture as disparate as house music. In fact, when you start to talk in terms of ‘discovering’ anything, history will constantly throw up ambiguity.

I’ll never forget when my primary school teacher subjected the class to an afternoon of copying from the blackboard the story of how Christopher Columbus ‘discovered’ America, but saw fit to tell us at the end of the lesson that some Icelandic bloke called Leif Erikson had actually been there hundreds of years earlier. Throughout our lives we are smacked in the face by the fact that history is only as good as the social status of the people making it and the fairness of the people citing it, and yet time and again it is cited carelessly by people who should know better. Even worse: when people are called out for being wrong about history, the responses are often equally careless. And they don't see the irony of it.

The amount of times I saw people railing against the documentary with words like “but London was still playing rare groove back then… we had house before they did”….. it’s just fighting stupidity with stupidity as far as I’m concerned. While it’s perfectly plausible that house music took greater hold in 1986 Manchester than it did in 1986 London, let’s not pretend that any local club scene in the UK 'discovered house music' before any of the others. Or if they did, let’s not pretend anyone can actually prove it. In the year or two before the ecstasy pill came along, the sub-genres of black music were too much of a blur for any DJ or venue to say they were the first to play house.

Then there’s the matter of distribution. Marshall Jefferson told me once that London’s Jazzy M was the first person from the UK to contact him about his music (and he wasn’t sitting on a throne or wearing a crown at the time), and you can’t tell me that a money-grabbing charlatan like Larry Sherman of Trax Records would peddle his wares to one major UK city and not another. He was famed for pocketing the proceeds from thousands of exports from Chicago artists who had no idea their music was being sold outside of the US… it might just have occurred to him to supply record shops in London at the same time as Manchester.

And what about all the other towns and cities in the country with clued-up record shops and DJs? While Mike Pickering was doing his trailblazing in Manchester, Graeme Park was making a name for himself in Nottingham, buying in the latest black music for Selectadisc records and playing it out with unbelievable skills in The Garage and eventually Rock City. Mike Pickering invited him up to Manchester to play at the Hacienda, and he did it because Graeme Park had proven himself in a different city, AT THE SAME TIME. I trust you are seeing a pattern emerge here.

The other thing this kind of debate throws up is the negative judgment of those who benefit from the skewed history. Pete Tong can easily be found guilty by association here, and yet he said nothing inaccurate. Many times in the past I've heard resentment towards the likes of Oakenfold and Rampling for their part in exaggerated history, but is this really fair? They were both very skilled at their own PR and the promotion of their nights back in the day (in Oakenfold's case certainly, his foothold in the media and the club business gave his concept a following wind from the start), but I've never noticed them say anything about the past that's been proven to be untrue.

Ultimately it's up to the media to put their words in the right context and for us to react to them sensibly. I think these debates would be so much healthier if people were more inclined to respond with "let's not forget Stu Allan in all this - his radio show got me onto house music" and left it at that, rather than slagging off those who they feel may have nicked his limelight. But Pickering’s tweet was spot on.

So to answer the question posed by the headline of this piece... yes, I think we should still debate the origins of house music in the UK, because it gives us all something to do. But why does one person or one city need to be credited with ‘discovery’? The media and critics of the media should know better than to reduce history to such binary bullshit.

You can watch the original documentary HERE.