Let’s be clear, Trump is a blessing. Whatever you want to call the gingham tinged clown, he has gifted millions of us with the one thing we craved so very badly: certainty.

He’s a perfectly sculpted hate totem, a vividly drawn pantomime baddie of ridiculous proportions. There’s nothing redeeming about the Donald, nothing at all. Physically he’s a shit state, from sepia Papa Lazarou face to tiny, twitter tweeting, pussy grabbing paws. He mangles language and invents stupid words, bigly. His personality is such a brittle thicket of vanity, insecurity, bitchiness, ill-temper, greed and cack handed bullying, that America appears to be run by an obnoxious child; Eric Cartman without the jokes.

Tump’s appointments – Steve Bannon, Rex Tillerson, Jeff Sessions- are a metastatic cancer seeping through the legislative body, and his policies are plucked from the tainted algorithm of Tay, the Microsoft chatbot that the internet turned into a troll.  Executive orders have been blurted out in a great broiling succession, a Daily Mail’s worth of swivel eyed attacks on immigrants, Muslims, healthcare, climate change, human rights, journalists, and LGBT communities, all launched via salty tweets hammered out by a seething, stubby thumb. 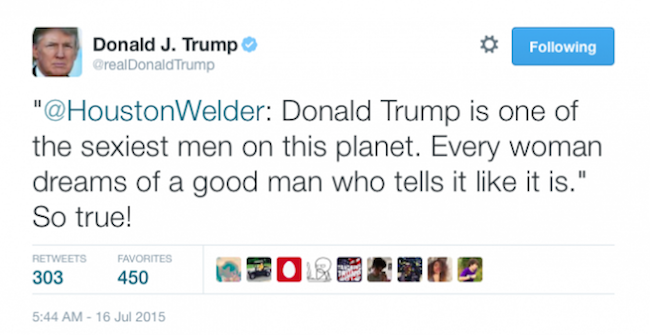 And for all the victorious Trump supporters out there, Tronald is a titan; a super hero capable of smashing the very fabric of time and existence, capable of teleporting this entire damn world back to blessed white Eden. A human member berry. It’s why David Duke has been tap tap tapping effusive praise onto social media with one hand whilst the other reaches for the hood. It’s why Nigel can’t stop grinning his froggy grin and dreaming of golden lifts. It’s why Theresa May has been clutching Donald’s leathery claw for dear life, hoping he can save her from facing up to the horrible truth that has been draining our entire nation of all joy; that Britain is rudderless, confusing and completely shit. Donald is now the one certain thing we can all agree about in this useless world.

Pre-Donald everything was a collapsing mess. And I’m talking specifically about England. We were a country split by a Brexit vote that had shredded our comfortably worn identities into sad rags. Suddenly, turmoil; party leaders, tribal lines and supposedly strong held opinions were punched so hard they shifted shape, settling into bizarre new configurations. It felt as though we were in the grip of a collective dementia, surrounded by unfamiliar faces and grasping at the slippery meaning of once solid words like fools gripping water. We heard Brexit means Brexit and wondered whether our minds had bailed. Baffling. No one knew what to say any more. Deep people quoted Yeats on social media.

But then Donald came in and actually was the extreme tough guy/ raging lunatic he said he’d be. And he’s made it all OK. Now we can remember who we are because he’s made it so very easy to position yourself either for or against the Donald. The world makes sense again! I get why people want to feel this way. Finally there’s a villain – or a hero – that is so implausibly black and white that he can blot out the shitty convoluted realities of modern existence. He’s the social media president, a polarising creation perfect for a world where opinions are best rewarded when held rigidly and repeated loudly. It’s why a fair proportion of people turned out in droves to protest his stupid flight ban. I don’t think it’s unduly cynical to think that many of the non-Muslim protestors were far more against Trump, and the idea of Trump, than they were for the people actually affected. There certainly appeared to be a lot more people offering a lot more outrage than there has been over our own government’s refusal to accept any but a handful of the refugee children stranded on our fucking doorstep. And, on the flip side, Trump’s bellicose strong man persona is why this women in Stoke wants him to rule not just America but (and I quote) “everywhere”.

As the stream of information we access has grown from a regulated trickle to a buffeting flash flood, our brains have shorted out. We're trying to decipher meaning from a million shouting sources. There’s a panel at the end of Watchmen when Alan Moore’s complex villain Ozymandias is taking in information from hundreds of screens simultaneously. He’s meant to be able to do this because he’s the smartest man on the planet – what chance us ordinary mortals have? We’re struggling to find patterns in the chaos of knowing too much. Trump’s presence sweeps all this aside with one clumsy shove. He's a calming reassurance for those drowning in new uncertainty, liberal and conservative alike. The drab shroud of indecision has been cast aside and we can see clearly once more. We are good people.

It's probably worth pointing out that whilst Trump may seem to be an unusually proactive bastard he’s just the latest in a long line of American bastards who have perched at various stations on the same line. I don’t doubt that he’s going to take all the prizes for being inventively the worst, but the structure that has created this situation has been developing over centuries. In living memory alone America has murdered leaders to implement tinpot dictatorships, implemented mass incarceration programs that have seen more black Americans imprisoned than were ever enslaved, and used the might of the US war machine to leave entire countries mired in violent anarchy. And that’s just the Democrats. Nations have been sanctioned, immigrants have been detained, innocents have been tortured, fake news has justified disastrous invasions, the earth has been pillaged, stacks and stacks of money have been made and if they’re not shooting aliens, they’re shooting each other.

Trump is all of that ignoble history gathered in one crass form. He’s the naked lunch, the moment where everyone can admire what’s on the end of their fork. And for that he’s a blessing. His presence makes pretending that this current order is OK impossible, because if you do then Trump. But don’t kid yourself that the world is any simpler. Don’t kid yourself that protesting Trump on the streets of London – and I fully acknowledge the value of showing solidarity with Britain’s Muslim population - fuck knows they get enough grief – will stop the escalating housing crisis, or will halt the flood of capital upwards, or will sort out the half lived lives of zero hour wage slaves, or will save the NHS, or will stop us going into some disastrous next war in the next few years, or will even greatly help the people in countries such as Syria who are living in hell and have been living in hell for years. Most of all, don’t expect it to have any great effect on Trump.

It’s appealing to hate the bright orange hate thing, so you may as well enjoy it – protest, sing and dance in the streets, these things are important for our health, and perfect reminders that we’re not alone, but, my fellow Britishers, don’t let the sheer gormless scale of Trump’s presence cast a shadow that obscures the very real – and far more knotty- problems besetting our own country. Cos while we’re shouting about stuff on the other side of the globe, a selection of unslakeable wraiths are eying up the potential of post-Brexit England and working out just what they can consume.