Track By Track: Tafi All Stars – Outside Rhythm
Minute Read

Track By Track: Tafi All Stars – Outside Rhythm JD Twitch's Autonomous Africa label returns with an album by Tafi All Stars – a collaborative project between Optimo Music artists Thomas Lea Clarke (MR TC) and Conal Blake (Whilst) and members of the Tafi Cultural Institute of Tafi Atome, Ghana.

Recorded in Tafi Atome in November 2016 after Clarke and Blake travelled out there with a basic recording set up of laptop, microphone, soundcard, drum machine and synthesizer, Outside Rhythm blends the rhythms and melodies of traditional Borborbor and Agbadza drumming forms and Ewe songwriting with electronic instrumentation and dub recording techniques. All proceeds from the album will go to fund the completion of the Ghanaian Door Studio that's currently being built in Tafi Atome.

Below, you can listen to snippets from all six tracks, and read Clarke's guide as to how the album came together:

The first track on the record is a dubbed-out storytelling featuring Michael Chilly Dzandu describing in Ewe how Stu and Emily from Green Door came to Tafi Atome and how the relationship between Green Door Studio and TCI began. The bass line and synth parts for this were written in Glasgow before we came to Ghana and for a while we seemed to be hitting a bit of a wall with it. Then Chilly added the vocals and everything seemed to glue together.

The title for this track translates as "togetherness" in Ewe. It was written by Regina Anyormi and the lyrics spread a positive message of unity. It's a kind of wonky-disco feel good track and definitely the most pop moment on the record. It was a lot of fun to record and features nearly every member of TCI clapping along in the background. Back in Glasgow, the drums were added by Laurie Pitt from Golden Teacher and Ianthe Hope and Emily feature on backing vocals.

Cantata is a slow form of traditional Agbadza drumming played on narrow drums with sticks. This straight drum track played by Jerry, Chilly, Robert and Emmanuel from TCI was recorded in one go and the free-style vocals from Chilly were the last thing we recorded in Tafi, literally as we were about to leave to come back to Glasgow. Back in Green Door we simply overdubbed some electronic sounds and applied some effects and the track was finished. 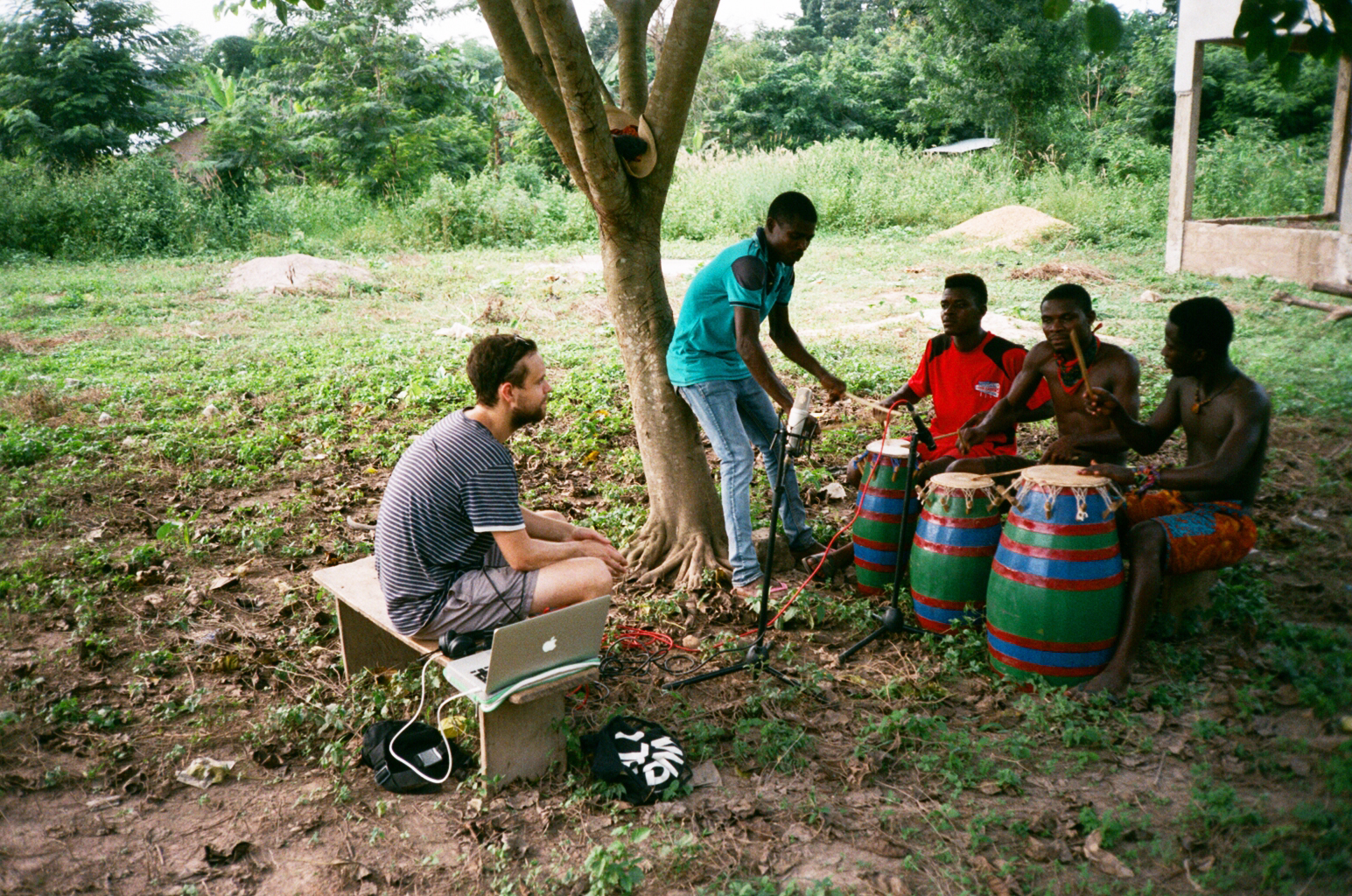 The title track on the record and the closest thing to a dancefloor moment. We ended up using the title for the record as well because every drum and percussion moment on the release was recorded outside in various locations around the village, and if you listen there are quite a few moments on the record when you can hear goats or children playing in the background. This straight percussion jam primarily features Agblor Jerry Phillip playing a derivative of borborbor rhythms on traditional kpanlogo drums.

For those outside the know, Stu 'Sordid Sound System' Evans is the best Dub Engineer this side of the Atlantic. When he printed this mix there was no way we couldn't keep it on the record.

Agbe Me Nya Wo

The record's closing track was written by Regina Egbeako and translates from Ewe as 'History of Life'. Her vocals are so beautiful that we left the first half of the track as an acapella simply layered over sounds of the Ghanaian forest at night. In the second half a chorus of drums recorded in the forest at night to an audience of Mona Monkeys comes in with some flute lines overdubbed by Daniel Magee (aka Lo Kindre).

Outside Rhythm is out 29th September on Autonomous Africa. Pre-order here. 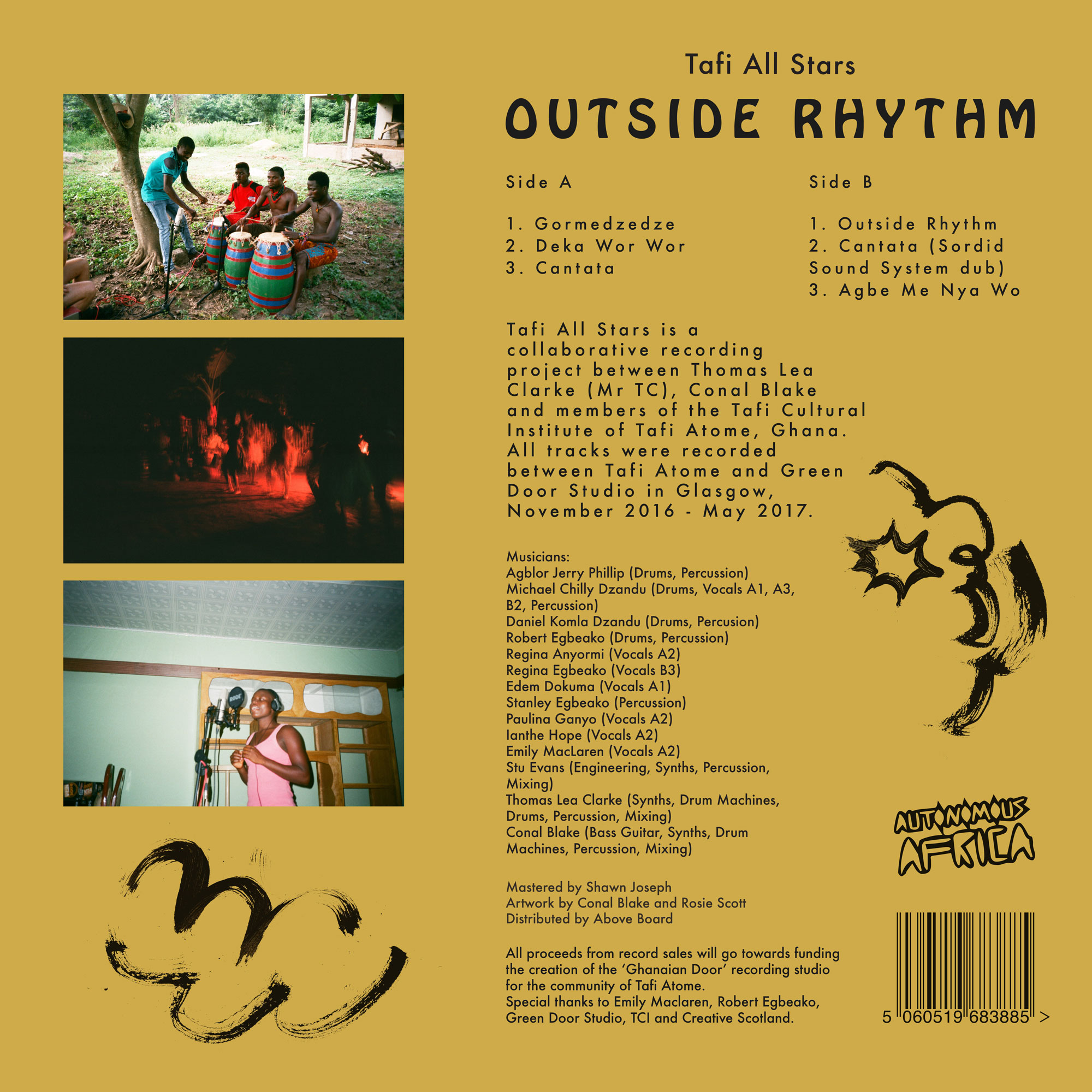