Inspiration can be found in beautiful places, this is perhaps no so more true than in the case of Llyr who has just released a new album built up of sounds recorded by the artist in the rainforests of Borneo. His new album is titled ‘Biome’ and features a collection of field recordings upon which music and textural ambient soundscapes are layered to create a magical dream like tapestry reflective of a lost moment in the forest.

The album was released today on Max Cooper’s record label, Mesh. Llyr aka Gareth Williams describes the project as follows:

“The amazing thing about nature is that there is a perfect solution for everything. Each organism is highly specialised and has exactly the right characteristics to fill a gap. Writing music holds a similar challenge – how do we create and arrange a collection of sounds and musical ideas so that they make sense as a whole but where each individual element also has its own proper place? In this sense, nature is the ultimate composer.”

We invited him to take us through the material which makes up this beautiful record track by track.

With this track I wanted to evoke the majesty of the rainforest, one of the most biodiverse and iconic biomes on Earth. It features polyphonic bird song, gently hollering monkeys and the crashing and cracking of branches, all shrouded in mist. This is the archetypal image most people have of the jungle and it seemed like the right way to set the tone for the album.

This song is created entirely from birdsong, monkey calls and the sounds of trees. The main harmonic pad is made from a recording of a bird, moulded into a playable instrument using a granular synthesiser and washed out into a drone using echo. The gentle percussion is made from recordings of large sticks being dropped on a huge piece of rocky lunar-like terrain.

2. Chorus of the Insects

In the jungle in the daytime there is a constant hum of insects underpinning everything else you hear. It creates a kind of static, primordial harmony. Simultaneously familiar and otherworldly, it is hypnotic and somehow puts you at ease, as if creating a connection with the most ancient parts of your genetic code. It’s amazing how all of these individual insects generating their own sounds create this all-encompassing unseen orchestra.

With this track I wanted to represent this jungle hum and the feeling it evokes. It is a drone piece created from recordings of insects, sometimes processed and manipulated a little, played back at different octaves to fill out the frequency spectrum. Sometimes a singular flying creature flits past my recorder’s microphones. The chattering bugs which occasionally appear are an eerie but beautiful sound I captured, surrounded by marshy pools, when night was falling and I was trying to get back to my camp before it got dark.

This song aims to capture the beauty and scale of an immense cave and also express the delicate balance that life experiences there. We’re accompanied on our journey by the ultrasonic voices of circling bats and the percussive sound of falling raindrops. The first section represents entering the cave via a long, narrow passage. As the passage opens up the motif becomes massively diffuse, as if carried by a ghostly wind. The final section represents the main chamber of this grand, natural cathedral.

Binaural recordings of water droplets in a dark, quiet part of the cave provide the ambience and the source for the granular textures. All melodic elements are created from individual pitched raindrops that I selected from these recordings, later diffusing into expansive choral drones. I also recorded the chattering bats at high sampling resolution so that I could pitch them down many octaves for us to hear how they sound. Even the low impacts and bass are made from cycles from the bat recordings; the ultrasonic becoming subsonic.

The sound of frogs singing at dusk in a swamp in Kubah National Park has earnt the accolade of being the most beautiful sound in the world. In the daytime the frog pond is fairly quiet but at night, when most predators are sleeping, a plethora of frog species vocalise in unison, in the hope of attracting mates. The result is an alien sonic soup of polyrhythmical tones and clicks.

In this track I left the rhythmical and pitch composition to the frogs and other fauna. I extracted a musical map from a 30 second recording of the pond. This consisted of the timing information for each creature I could hear. Using a spectral audio editor I pulled out each individual sound as a one-shot sample and then reconstructed a “digital frog pond” with the map. This allowed me to use my processing techniques on each individual sound but have the piece be totally driven by the musical structures nature had given me. Some of the more tonal frog vocalisations were captured in a Reaktor audio looper which was gradually distorted to create the slow crescendo which heralds the arrivals of humans in the second half of the album. 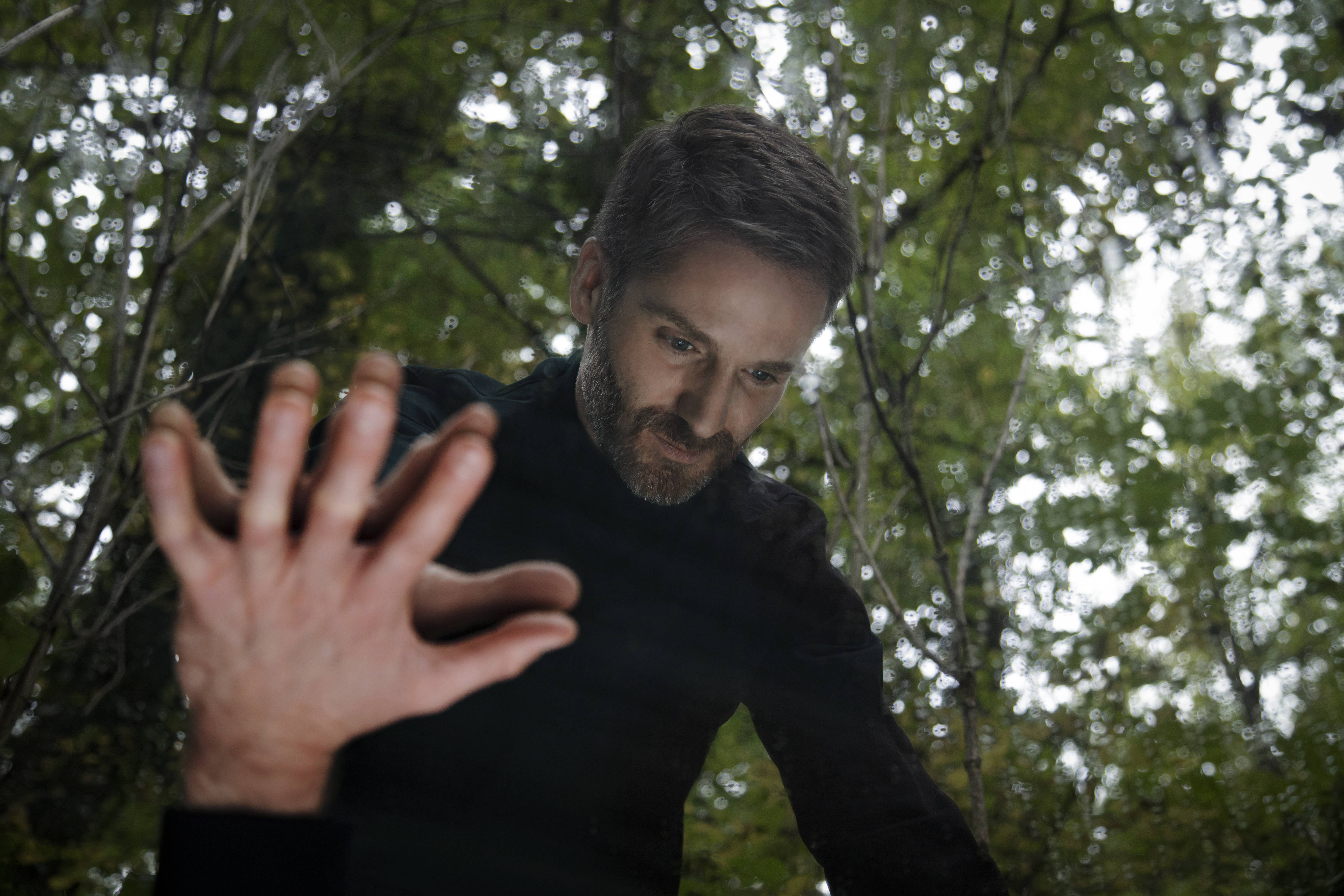 A narrow road (marked #509 on the map) ran past the giant cave where I was recording. Sometimes a large vehicle or a motorbike would go roaring past. The acoustics of the cave meant that these rumbles would be funnelled into the space and amplified as the sound waves ricocheted off the walls. The pockets of bats near the cave entrance seemed agitated and distressed by these ominous low sounds.

The traffic rumbles in this giant cave sounded like the deepest bass. I used this sound, filtered down, to create the bassline underpinning this track and to explore the idea that, even in an environment so seemingly isolated, where even daylight struggles to penetrate, the inhabitants experience and are disturbed by the presence of humankind.

The rain had just stopped after a three day downpour and we were sitting eating in the outdoor kitchen area in a longhouse on an organic farm on the outskirts of the rainforest. It was early evening and we were eating under the light of a simple lamp. A large insect flew up behind me, attracted to the light,  and then another, and then another…  Before we knew it we were in the middle of a swarm of insects. Before dashing for cover I quickly turned on my recorder, which was sat on its tripod, and recorded the inside of the swarm. I had just witnessed an event which wouldn’t have happened if I hadn’t been there. Sometimes our mere presence is enough to change things. This is reminiscent of the Hawthorne Effect from psychology.

This recording of the high frequency beating of thousands of wings and the wing flaps of individuals who flew right up to (and bashed into into) the microphones became the source for this song. A drumkit was created by layering individual insect sounds. Lush, harmonic strings were created by repeating many tiny grains of these recordings.  A pulsatile alarm was made by sending the insect sounds through a Metasonix distortion unit feeding back into itself. As such we hear the insects acting as individuals and also swarming as one. This the unsettling sound of an event that is wholly the result of an interaction between nature and humankind; a warning signal for us to consider our co-existence with nature.

I recall walking along a trail in a national park. We’d set off at dawn because this is when the wildlife is most active. The incessant insect chorus also starts at sunrise and I wanted to find some recording opportunities before it began. It seems we woke up earlier than some of the locals, as we encountered a large adult proboscis monkey dozing and snoring loudly in the branches overhanging the trail. Treading quietly, we saw a whole host of amazing wildlife: birds, scores of monkeys, weird bugs. We hadn’t seen any people for hours until we started heading back to camp. We heard a group of five hiking tourists coming the opposite way, laughing and chattering loudly. We eventually crossed paths with them and exchanged a few words. They complained that “there are no monkeys here, we’ve hardly seen any wildlife”. When we said that we’d experienced completely the opposite, they seemed really confused.

This piece features such human interjections in an otherwise serene environment. If you listen carefully, you can hear a point where I was that noisy human. We’d been given permission to drive up a small path used by forestry vehicles to get to a very active frogpond at night. I’d set up my sound recorder at the pond and returned to the vehicle to wait. We were sitting inside and I accidentally triggered the blaring car alarm, interrupting the beautiful frog song. The track also includes a layer of human voice (from Sean Phillips of Private Agenda) on top of the sounds synthesised from my manipulated recordings.

The closing track tells the story of the human environment encroaching on animal habitats. It juxtaposes bird sounds and the cries of monkeys with the sounds of the city. It prominently features a clanking piece of loose pavement I recorded at a crossroads in Kuching, the capital of Sarawak. It was right next to where we were staying and every time a car rolled over it it made a loud, obnoxious clanking sound. Just another piece of unnecessary noise pollution adding to what was already there, making our presence just that tiny bit more difficult to ignore. It is a metaphor for the crossroads we find ourselves at right now with respect to the future of the natural world upon which we depend.

This story is being told all over the planet, with city life pushing further into areas previously reserved for the natural world. Indonesia is even relocating its capital city, Jakarta (which is sinking), to Kalimantan, the Indonesian side of Borneo. Critically, the effects of the rampant over-consumption of Earth’s resources worldwide are felt especially heavily in these vulnerable habitats. However, it still remains possible for us to have a more complementary, symbiotic relationship to the natural world if the 2020s are the decade when the world changes course. So I intended this piece to offer a glimmer of hope and optimism.