The History Of Glitter
Minute Read

The History Of Glitter For years now I have been slightly fascinated but mainly extremely annoyed by the mostly English festival culture of people smearing themselves with one of the most vile inventions created by man, GLITTER. Or as I like to call it, the English ebola. A seemingly incurable disease that spreads quicker than wildfire and is potentially even more destructive. After playing any outdoor event attended by mostly English punters I will find patches of glam in my records, hair, pockets, and other orifices for weeks. I once saw someone do two lines of glitter and that didn’t end well at all. That being said, I am an open-minded person, so I thought maybe we should delve into the HISTORY OF GLITTER, and it might change my opinion on the gaudy glister. It did not. But it turned out to be an interesting read nonetheless. SO. Join us on a wild and reckless journey into the history of GLITTER… R$N's Cosmo Godfree reports.

You might not have expected it but glitter has actually been used as decoration since prehistoric times. Cave paintings have been discovered with mica flakes mixed in to give them a shimmering appearance, while the ancient Egyptians used cosmetics made from the iridescent shells of beetles mixed with finely ground malachite. The word ‘glitter’ itself comes from the Old Norse word ‘glitra’ meaning ‘to shine’, but modern glitter as we know it today wasn’t invented until 1934. We have Henry Ruschmann to thank for that, a New Jersey cattle rancher who dabbled in machinery and found an efficient way of cutting plastic sheets into thousands of tiny pieces.

Glitter’s popularity has grown ever since – from glam rock and hair metal to gel pens and My Little Pony. Artists as varied as Andy Warhol, Lynda Benglis and Damien Hirst have used it in their work. Typing ‘glitter’ into YouTube’s search bar reveals thousands of teen vloggers mixing in into homemade ‘slime’, which is a whole other article in itself to be honest. Glitter is the basis of countless viral fashion trends – Etsy and Instagram accounts across the globe are covered in liberal dustings of the stuff. In 2017, it seems as though people are ready to put glitter on anything and everything – beards, armpits, tongues and even cappuccinos. Oh yeah, and that’s without even mentioning Passion Dust Intimacy Capsules – basically a sex aid that dissolves inside you and… well, you get the gist. Took me weeks to clean that stuff up.

Perhaps the most common association that glitter holds today – or at least the one most relevant to us – is festivals. Because apparently true self-expression is impossible without donning suspenders and fighter pilot goggles before drowning yourself in sparkly make-up. To some festival-goers it’s simply a way of getting that IRL princess look without resorting to Snapchat filters, but to others it’s also a fabulous political display of feminine or LGBT empowerment  (hence the recent history of throwing glitter to protest against conservative/far-right figures such as Mitt Romney or Richard Spencer). Of course, glitter and dance music have always been fine bedfellows – one New Year’s Eve in the late ‘70s the floor of Studio 54 was covered with over four tons of the stuff! It’s just now that the contemporary obsession with all things sparkly and social media-friendly has seen it become a tool, a way of communicating to everyone on your timeline that “I’m fine! I’m having fun!!”

There’s a cost to all that fun though. It’s been well documented that glitter is bad for the environment. Just like how certain cosmetics used to be full of non-biodegradable microplastics (before legislation was passed to ban them), so too is glitter. After you take that much-needed post-festival shower, all those microplastics hit the drainage system and end up accumulating in our rivers and oceans and absorbing toxic chemicals, only to then be eaten by unknowing fish. And yes, of course, they make their way back up the food chain and find their way into your body via Friday lunchtime down the chippy. In the words of Taylor Swift, this is why we can’t have nice things.

Let’s close things out by exalting one of the most noble and virtuous uses of glitter – revenge. A dish best served cold; or rather, in millions of irritating little fragments of metal and plastic embedding themselves in your clothes/shag carpet/family pet and no doubt residing there for decades to come. Yes, that’s right, I’m talking about the practice of mailing your enemies glitter, or ‘glitterbombing’ as the correct parlance would have it. It first went viral in 2015 when a young man called Matthew Carpenter launched the website ShipYourEnemiesGlitter.com only to sell it soon after for $85,000 when he found he couldn’t keep up with the insane demand. Or so he said – he later dismissed the whole thing as a stunt designed to improve his marketing skills.

I think the fact that demand was so high should tell us something about the point we’re at as a species, but weaponising glitter isn’t without precedent – according to some sources, the Allies allegedly considered glitterbombing as a tactic in WWII in order to mess with German radar. Strange how that one never made it past the planning stage. For a more recent and successful approach, you have to turn to Project Unicorn – the invention of 11-year-old Jordan Reeves who was born without a left arm and was inspired to create a 3D-printed prosthetic limb which doubles up as a glitter cannon.

It doesn't sound as though I've been able to change Marco's opinion on the "English ebola" – although that was never really the intention if I'm being honest. I just wanted to present the facts in an honest and straightforward manner, but having now spent far too much time on this bullshit myself, my feeling towards glitter could best be summed up as having gone from "tepid indifference" to "feverish animosity/physical allergy". I guess the other big takeaway from all this is that there are staggeringly few decent songs with the word 'glitter' in the title – that, and the fact that there are a worrying number of active and dedicated Gary Glitter fans at large on the internet.

Maybe this whole glitter thing is just a fad. But I doubt it. Like a virulent STD, once it's on you it never goes away. So if you're a glitter addict, hopefully this article has given you pause to consider your actions. After that, the first step is admitting you have a problem. We're here for you. 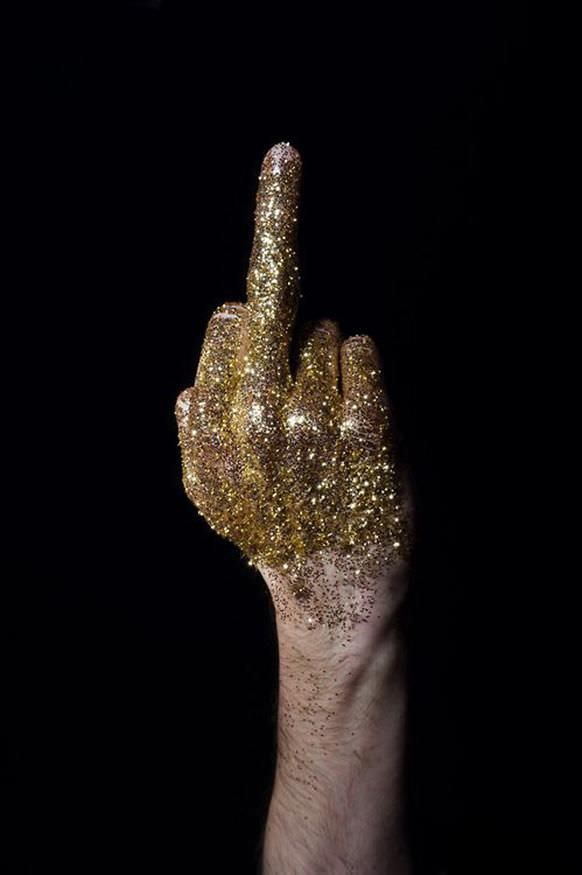