Our resident ‘man of mystery’ (alright he works in a record shop) chooses to shine his vinyl shaped spotlight on a dimly lit corner of that wonderful world of ‘7”s, 12”s, LPs etc. that we call, err, records. The records chosen needn’t cost an arm and a leg, be especially rare, or even be so obscure that you out there in ‘normal land’ are like never-ever-ever going to find one – in fact, they don’t have to be good at all (although that does help). No, our record shop employee has a far more noble aim – namely to celebrate the seldom-celebrated, to tell the story of a record with a story to tell – no genre shall go unturned, after all, a tune, is a tune, is a tune…..

For this edition our mystery employee is fresh back from a long weekend at a witches coven waxing lyrical about this folk/hippie curio from 1971 – looking for something that joins the dots between our pagan ancestry, trad. English folk music and ‘70s kids TV fave ‘Play School’ ? Look no further….nurse, the garlic please!

Errr, not quite….for those of a certain age, okay anyone who grew up in the U.K. in the 1970’s, Toni Arthur will forever be associated with ‘Play School’ (and it’s ‘free-form’ spin-off for older kids Playaway) both wonderfully progressive children’s TV programming that extolled the virtues of education through play: ‘A house, with a door, 1 2 3 4, ready to play, what’s the day? It’s..” Now, Let’s take a look through the square window…..

The programmes boasted an inclusive cast that found room for former pop singers, RADA trained thespians (that’s Jeremy Irons in the pic above), future television and film stars and, lest we forget, one of the first black presenters of a British television show (Floella Benjamin)…Mmmm, perhaps not that difficult to see how a well-travelled folkie could also forge a separate career here…. However, we’re getting ahead of ourselves. Rewind to the early ’60s and Dave Arthur and our future TV presenter Toni (Hay) would meet on the hip and happening Brit folk scene. Dave Arthur was already well versed in that heady mix of US folk/blues coupled with more traditional English fair (or should that be fayre?) that was de rigeur on the folk circuit, while she was a recent graduate from the hallowed halls of the Royal Academy Of Music. Relocating to Oxford they ran a book shop and began to perform regularly on the folk/coffee bar circuit. Before long they came to the attention of two of the U.K’s finest folk imprints; Topic and Transatlantic.

Their debut LP, ‘Morning Stands On Tiptoe’, comprised entirely of traditional English folk song comes on like some folk purists dream. However, its wonderfully stark edge was a portent of things to come, the follow-up ‘The Lark In The Morning’, released on Topic in 1969, continued the none-more-folk-than-us vibe with trad/arr. material aplenty and there’s even a distinct whiff of the medieval about it, check the picture that adorned the LP sleeve – hey, and quite possibly, nonny-nonny. “Come up and show me your madrigals”, the second album from 1969…

‘Hearken To The Witches Rune’

The Arthur’s were much admired by fellow folkies for their dedication into researching and unearthing not just traditional song but also to the wider aspects of folklore and customs that informed their material – so whilst previous albums recounted traditional dancing, seasonal songs, sea shanties etc by the time they recorded their third (and final) long-player they’d delved a little deeper than before, casting a watchful eye back to England’s Pagan ancestry with songs taking on a whole new ‘wicker-man-folk vibe’, helped in no small part by the influence of self-styled ‘king of the witches’ Alex Sanders, an English occultist and High Priest in the Wicca religion whose orbit they’d fallen (briefly) into. 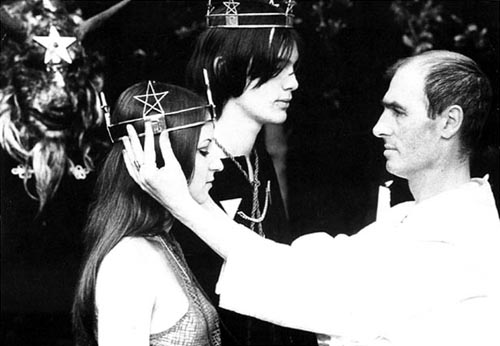 …that’s Alex on the right, he also made the ‘A Witch Is Born’ LP on A&M in 1970…a guaranteed party-starter that’s for sure!

So, suitably fired-up with a head-full of all things witchcrafty, the Arthur’s music now included such witch-bothering material as traditional song ‘Alison Gross’, here given a wonderfully stark reading featuring just solo voices and a lonesome Bodhran for good measure. It’s a cautionary tale for anyone who thinks they may be being seduced by a witch (well it could happen); “she showed me a cup of good red gold, well set with jewels so fair to see, saying if you will be my lover true, this goodly gift I will give to thee”.

The super-natural theme continues throughout, second track ‘Tam Lyn’, yes the same song made famous by the Fairport’s epic version on Liege and Leif, is again given a bleak, unadorned reading – it’s a song bound up in the notion of fairies, a key theme in ancient British folklore, at its heart it’s a song about transformation that contains a warning: “beware fair maiden Tam may take your virginity”….think of it as the mediaeval equivalent of “you’re not going out dressed like that”..

However, if you’re  looking for a real detour into the world of the chilling and stark check out ‘Cruel Mother’. An everyday story of infanticide involving a woman who gives birth to one (sometimes two depends on which version you heard) children (usually sons) in the woods, which she then promptly murders and buries them. On the journey home, she sees children playing and states that “if they were hers, she would dress them in fine garments and take the very best care of them”. With a suitably Hammer Horror-esque twist the children tell her, “when we were yours, you didn’t dress us in fineries but in fact had murdered us”. Blimey, you don’t get that with the Corrs! The Arthur’s version is suitably bleak and windswept, two solitary voices mixed into left and right channels…..

‘Hearken To The Witches Rune’ was the last recording by the pair and throughout the ’70s and ’80s they remained largely forgotten until the whole folk/acid folk revival of recent years gave them a second lease of life. Dave Arthur would continue to explore folk music in all its myriad shapes and sizes and also edit the esteemed ‘Folk Music Journal’ whilst Toni would…well we know about Play School, anything else? Indeed, she was a presenter of Radio Four’s Woman’s Hour for some time, has published several books/plays and has more recently worked as a successful theatre director……

…….okay, now form a circle, hold hands and repeat after me….