Tempelhof are not as their name might infer a Berlin based outfit.  They’re actually a pair of Italian producers Luciano Ermondi and Paolo Mazzacani. It would be fair to say though, that their music is informed and takes influence from many glacial German electronics alongside a healthy dose of Eno-esque soundscapes and the odd bit of shoegaze thrown in.

Releasing their debut album on Newcastle based Distraction Records back in 2010, Tempelhof have since gone on to hone their aural landscape into soundtracks of early 20th century films, with Enjoy Neuklln even making it onto a film at the last Berlin International Film Festival.

With their second sublime album Frozen Dancers just released on Hell Yeah Recordings. A beauty of analogue electronics we asked the pair to put us together the R$N mixtape of influences and caught up with them for a chat.  Have a read and a listen blelow

Hi guys, I wanted to say what a massive fan of the album I am and you guys in general.  To the un-initiated please introduce Tempelhof.

First of all, thank you Wil, we are long-standing followers of The Ransom Note, so to have a chat with you is a pleasure!
?Well, Tempelhof is a musical project born in 2009. At that time, me and Luciano, after our previous experience in an indie rock band started working together again, exploring electronic music. After a short time we got in touch with Distraction Records, a Newcastle based label with whom we released our first album. The first album was heavily influenced by ambient and shoegaze. The album was received really well by press in the UK and gave us the opportunity to arrange a mini tour around London, Leeds, Berwick and Newcastle upon Tyne. After that, we decided to not replicate what we did till that point. We took our time to grow up and, on the way, we met Hell Yeah Recordings.

We are both from the countryside of Mantova, a small city in the North of Italy that normally no one’s heard of and we still live here. Small places like the one we come from can be really cruel and in-hospitable, especially if you are a musician or in general an artist. You have to travel frequently to not go nuts! But from another point of view, living here is a condition that forces you to focus on yourself, on your artistic path, on a very weird melancholia that’s probably pretty evident in our music.

Musically, how did you get to where you are now.

As I told you in the brief introduction above, where we are now, musically wise, is the consequence of a pretty long path that we did exploring music. Approaching the electronic world has been a kind of massive revelation! We have been completely surrounded by the sound of synthesizers. We started collecting old synths, effects, drum machines It was one of the most exciting things happening in our lives. To me was something new. I was a big fan of electronic music, but just as listener. Technically, I was an absolute beginner! Luciano, instead, has been djing for years before, releasing a couple of dance tracks. Anyway, weve composed a lot of different material in the last years, in many cases very eclectic, just because we get bored to stand still on the same sound for a long time. Weve switched from the ambient/shoegaze sound of our debut album to something more up tempo; remixing people like Margot, Crimea X, Maxime Dangles, Florian Meindl and many others and now, Frozen Dancers represents a kind of self-portrait of what Tempelhof is today. Its a step forward and a step back at the same time.

You are Italian but you call yourselves Tempelhof, please explain why.  I have a love affair with Tempelhof Airport. It’s such an imposing and sinister place but now it’s closed it’s such an amazing place to hang out. My girlfriend and I lived just on the edge of it over the last few years for some time. We had some amazing times cycling up and down the runway.

I can imagine your music soundtracking a cycle ride as the wintery glacial surroundings draw in.  But yes, enough of that. Please explain your reasoning.

Everything began thanks to a trip that I took to Berlin. At that time, we had only recorded one song with no title. The project still had no name. I spent an amazing week with a great artist called Mizzi Stratolin, hanging around the city and one day he took me to Tempelhof. We only saw the building from the outside, but that vision was a shock, I dont know why, but that’s what happened When I saw it for the first time I immediately realised that Tempelhof would have been a perfect name for our new band Marco still doesnt think so, but, thats it!

One day do you hope to play on Tempelhof?

Talk us through the mixtape of influences you’ve done for us.  Take us through what each track means to you.

The first track of the mixtape is by Motorpsycho, one of those bands that we have loved since when we were very young, an incredible band that has been able to change its sound whilst remaining honest and inspiring. Gigi Masin is an amazing Italian artist that has been recently rediscovered thanks to his new album Talk to the Sea. The one in the mixtape is an unreleased tune. We will release a new album with him very soon, and Interstellar Bop will be included in it. Tortoise is another seminal band for us. We chose Laurie Anderson because she was an innovative artist and to make our personal tribute to his husband Lou Reed. Both Synkro and Andy Cato work with Apollo records, a label that we love very much. Aux 88 is a very recent discovery, even if they were quite popular during the 90. That track seems like it was composed yesterday, still incredibly fresh! The Area are one of the most important bands of italian progressive music. We knew DJ Yogurt thanks to Peedoo, Rei Harakami music has entered in all our recent mixtape. All the others are simply amazing tunes by artists we love.

Tell us about your love affair with Hell Yeah.

Our story with Hell Yeah Recordings and Marco Peedoo Gallerani, the label owner is made by several remixes, two EP’s and one album so far and, well, we are very happy to work with someone totally in love with music that constantly watches outside the italian boarders. Thats the reason why Hell Yeah is very renowned abroad. 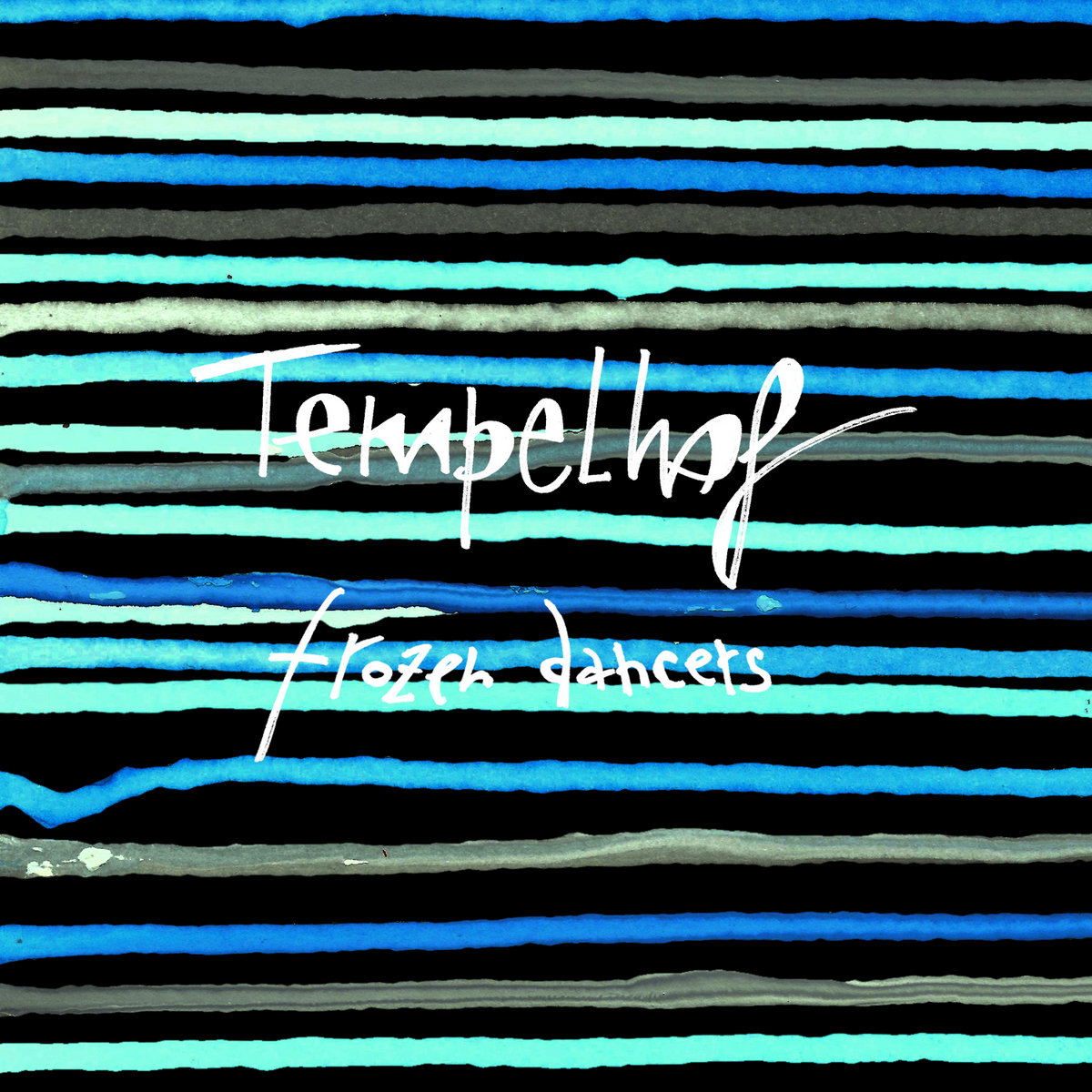 Your new album is a thing of beauty covering lots of different ground. Talk us through its formation.

Everything weve experienced over the last number of years (musically and not) is entered into the album. Theres many influencies: from dub to techno, a lot of ambient, a bit of Northern Europe electronic. But theres also a very special mood that is possible to trace in every single tracks: a motionless movement

What does a live show consist of with Tempelhof. What makes you live?

The live shows are a very consistent part of the entire project. We really love playing live. Our shows are a kind of sound-visual experience. During the shows, we normally project visuals found and edited by Sorry Boy, the third Tempelhof, as we call him, which is a friend of us and a great artist too. His vision of our music is amazing. Musically, we love taking with us a lot of instruments: synths, samplers, guitar, effects
Too much stuff maybe, but we should be the first to enjoy the show!

?Your remixes tend to be more upbeat than your original material. Is this a conscious thing?

Only in part, I guess. For people like us, who are not really dancefloor oriented, the remix is an opportunity to experiment and at the same time, to have fun. So, when we start doing a remix sometimes the song itself takes the control and leads us towards the clubbing sound!

I’m in love with your remix of Margot from last year. What’s your favourite remix you’ve ever done?

We really love that remix too, its probably one of our favorite alongside the one for Florian Meindl and the unreleased of Nuvolari, a great track by Telespazio aka Fabrizio Mammarella.

The first record that Luciano bought was Im the man from the Anthrax. Mine was a record of Alberto Camerini, a crazy italo-brazilian synth pop  singer from the 80s The last one I bought has been Akkord. Luciano, who is a proper vinyl junkie, recently got Whos that man – A Tribute to Conny Plank.

Weve immediately thought of the egyptian one But actually, we would like to be the Maneki Neko, the porcelain cat that you can find in every chinese restaurant or shop The one that says hello with the paw!

A German movie like the ones of Herzog and Wenders. Dunno why, but makes sense! On the visual point, we are very related to Andrea Amaducci, an incredible painter and performer that has realized the most part of the covers for Hell Yeah releases. He did the one of Frozen Dancers and we are very proud of it!

We used to listen to a lot of music like every other teenager, specially the Hip Hop Italian scene, bands like Isola Posse, Assalti Frontali. The Italian hardcore heroes Negazione and bands like Atari Teenage riot, Underground Resistence, the post rock scene and, naturally, Nirvana!

I could say Mazunte, a lost place on the Mexican Pacific coast where I probably lived the best time of my life, but we love London indeed. Talking about Italy, we suggest that you to take a trip to our gloomy countryside, that has its own charm!

Luciano is a hi hat for sure. I feel like a snare with a very long reverb.