Californian producer and Scuffed Records alumni Farsight guides us through the expressionist paintings that inspired each track on his new album Not Here, But Somewhere out via Maloca Records.

Dramatic, piercing, and electric are the adjectives that come to mind when I look at this beauty by Clyfford Still. The thick vertical bands of black paint cut against raw canvas and leave a commanding negative space which is further punctuated by thin stripes of ochre and gray. By this mature period in his career, Still mixed his own pigments.

‘My paintings have no titles because I do not wish them to be considered illustrations or pictorial puzzles’, he once wrote. ‘If properly made visible they speak for themselves.’

In 1951, Still acrimoniously cut his ties to the New York art world and moved to a rural home in Maryland where he continued to paint until his death in 1980. The vast majority of his paintings were kept hidden from the public (per the artist’s will) until the Clyfford Still Museum was completed in 2011 in Denver, Colorado. 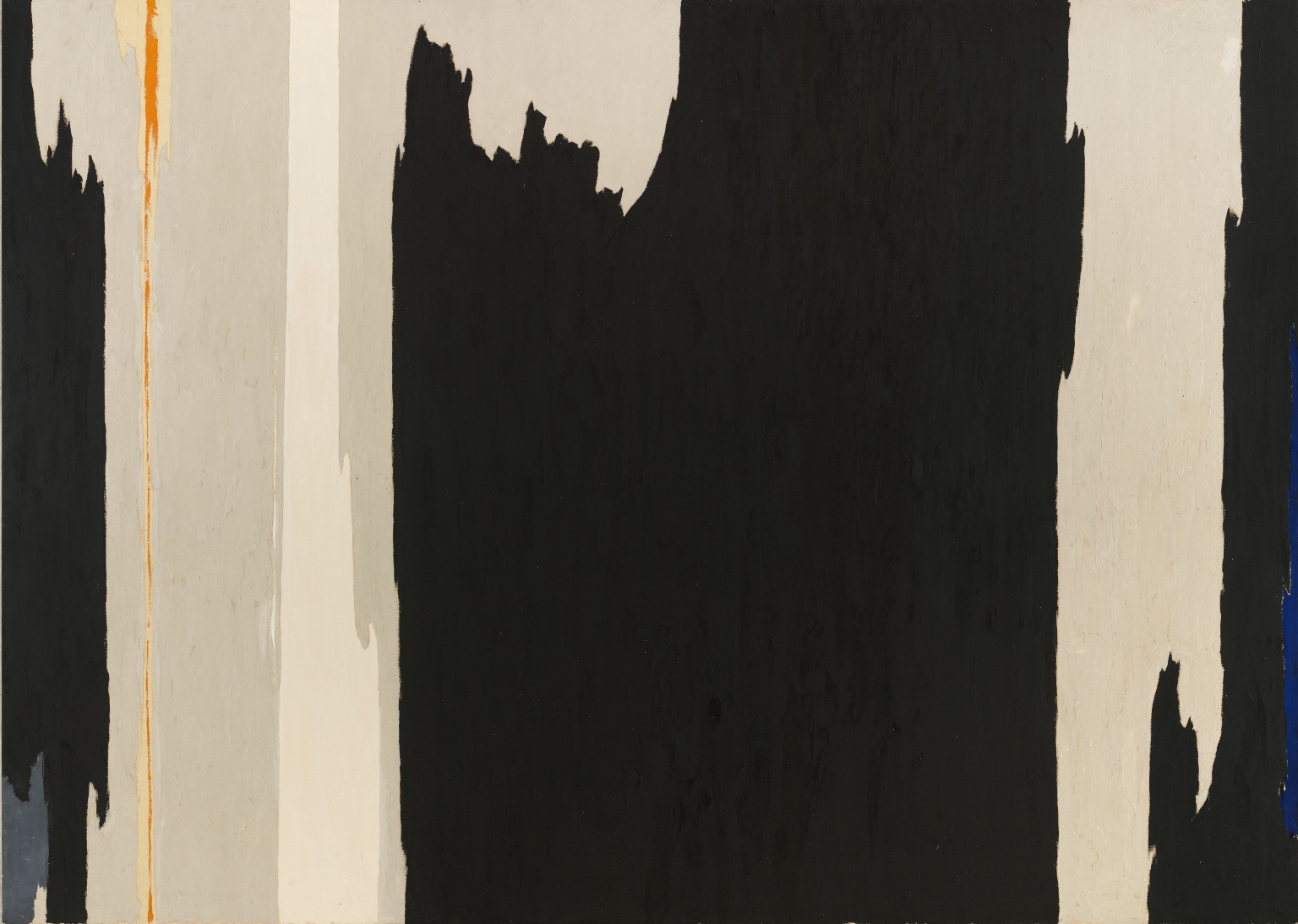 Morris Louis’ mature pieces are enigmatic and breathtaking explorations of color, form and space, typically on massive, mural-sized canvases. “While” is perhaps one of Louis’ most exuberant pieces, evoking an extended rainbow or abstracted, fantastical flora.

Louis was extremely private in regards to his artistic practice, and thus no public account exists describing his exact painting techniques. It is known he was an early adopter of acrylic paint, using a brand named Magna, which he supposedly thinned to his desired consistency and then carefully poured onto canvas in a controlled manner. 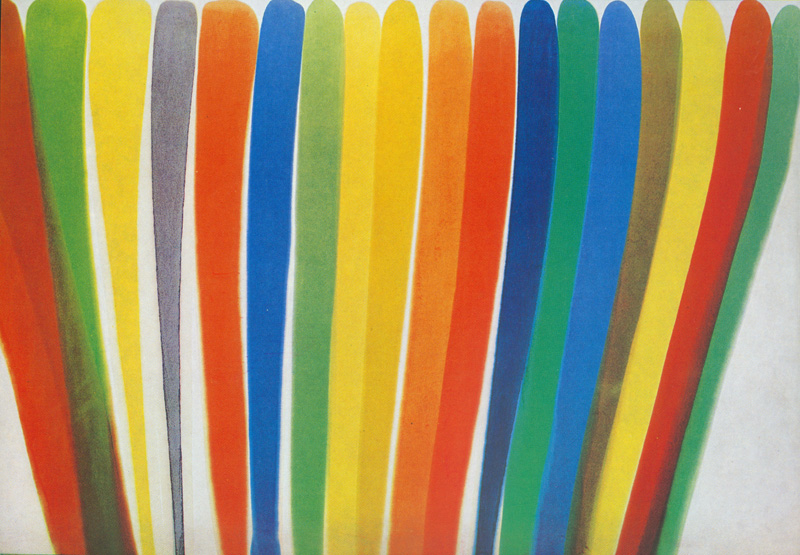 Created in the year of his passing, “Hot Half” underscores Louis’ restless experimentation with form and composition. Although the saturated colors and prominence of empty, raw canvas recall Louis’ earlier works, “Hot Half” introduces a sense of sharp angularity to Louis’ catalogue.

On September 7th, 1962, Louis was taken by lung cancer brought about by excessive exposure to paint fumes, likely a direct result of his signature staining technique.

Following his death, Louis’ wife, Marcella Brenner Louis, made extraordinary efforts to preserve her husband’s paintings, oversee posthumous exhibitions, and place his works in the collections of esteemed public art museums around the world. 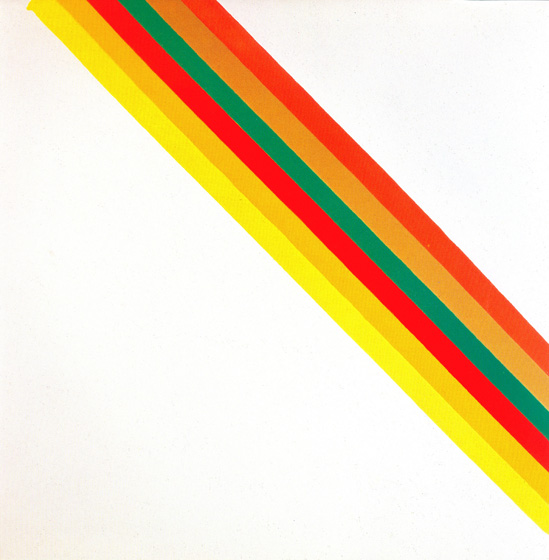 The unbelievable texture of this work was achieved through the artist using their feet to apply eruptions of viscous oil-based paint to a canvas secured on the floor. The artist would hold onto a rope hanging from the ceiling to maintain balance while delivering kicks of color to the canvas.

Although compositionally explosive, there is a delicacy to the balance of colors in this painting. Red, black, and white each have a crucial and distinctive role in this piece because the artist knew when to STOP applying color. 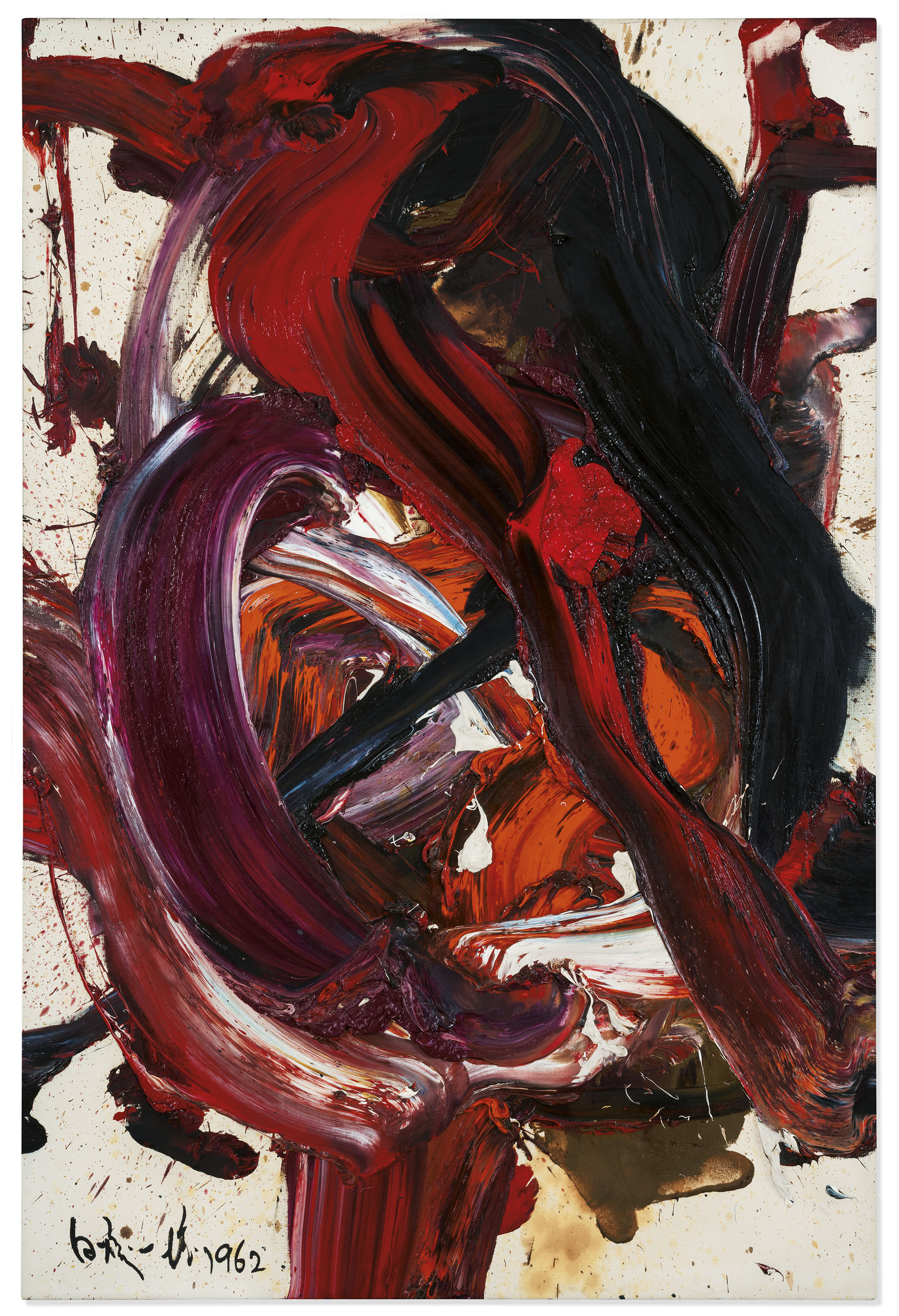 In this particular piece, Sam Francis is able to elevate the splatter with the thoughtful application of vibrant color. The layers of texture and shade create visual complexity and an illusory sense of depth, enhanced by the bare background.

A Californian struck with wanderlust, Sam Francis emerged as a painter of repute in 1950’s Paris before establishing temporary or long-term studios in cities such as Tokyo, Mexico City, Los Angeles and New York. 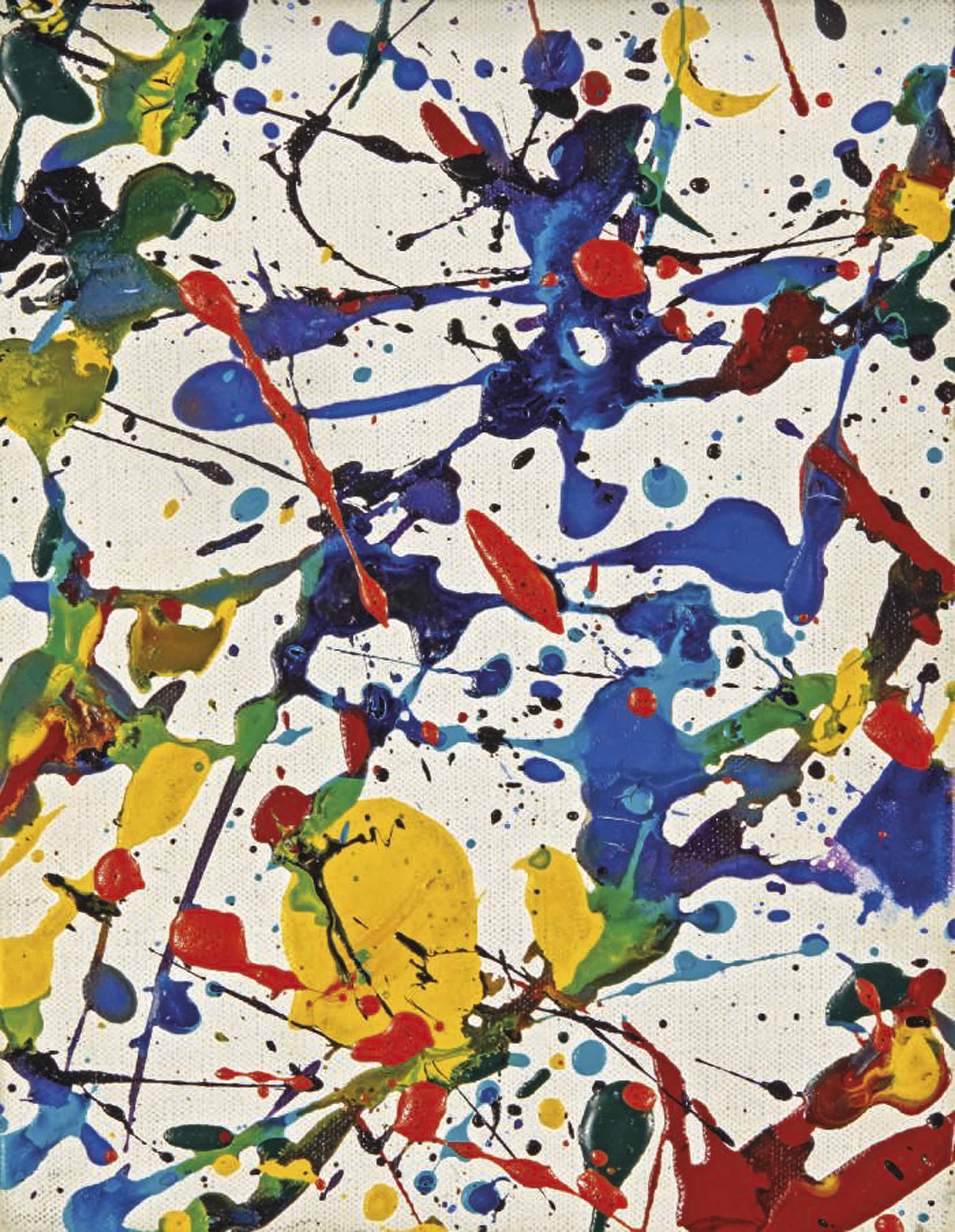 In 1926, When Willem de Kooning was 22 years of age, he set off from his native Rotterdam without telling any of his family, as a stowaway to America. At the time, de Kooning hoped to become a movie star in Hollywood. Instead, he became one of the most pre-eminent painters in American history.

An artist with many distinct stylistic periods, “Door to the River” is characteristic of his work from the end of the 50’s to the mid 60’s, featuring what de Kooning referred to as “ice cream colors”. Forever interested in natural landscapes refracted through his own personal world-view, this mysterious composition is no doubt a metaphorical “door” to a river, or perhaps the idea of a river that may never have existed. 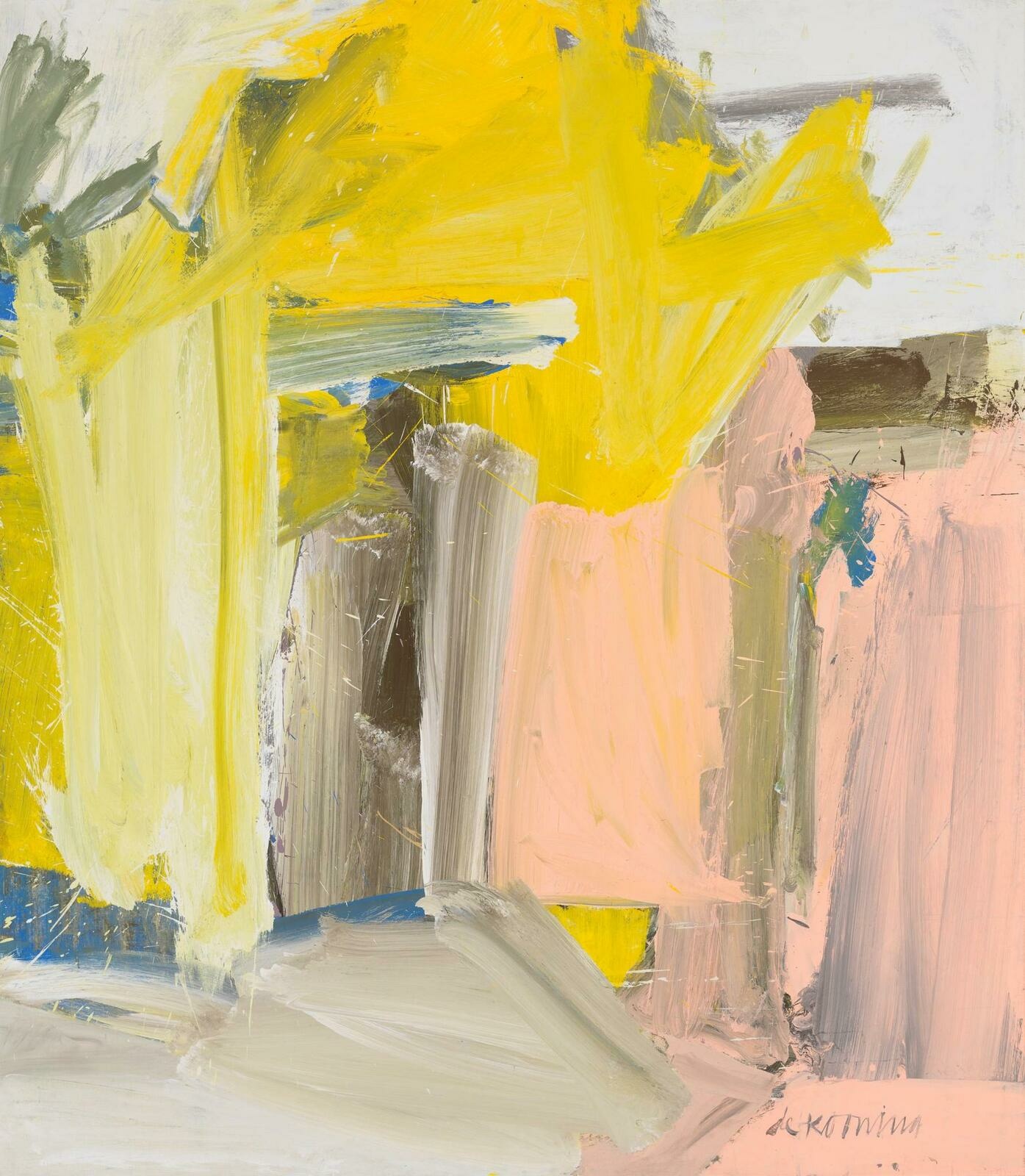