Jason 'Solvent' Amm has been active since the late 90s, creating numerous indefinable mutations of dance, rich with the pulsing warmth and chaos of analogue circuitry. Recent years have seen Amm serving as producer, co-writer and interviewer for the independent documentary epic I Dream Of Wires exploring the history, demise and resurgence of the ultimate electronic music machine, the Modular Synthesizer. All the while Solvent has pursued the industrial, acidic sounds that have always lain dormant in his work, and this mix for R$N offers an emotional gut punch, with slow, stately machine music giving way to chunks of bristling techno and bursts of quivering, tentatively euphoric melody. We caught up with Amm to discuss just how a producer who doesn't "put a lot of stock into recording mixes" goes about making a mixtape…

I discovered Skinny Puppy when I was 14 and they were the scariest and most extreme thing I'd ever heard or seen at that point. They were  definitely the soundtrack to some very insane moments of teenage rebellion and suburban subversiveness. For example, my friend's father was the head of District School Board – he had a Board meeting at the house one time, where my friend and I decided to burn a cross on the front lawn, all decked out in goth clothes and blaring Skinny Puppy, for all of the attendees to see. That sort of thing! I'm still a massive fan of Skinny Puppy and actually saw them in concert a couple of weeks ago.

Are there many people from Zimbabwe making the same sort of music as you? What's the scene like out there?

I have no idea. I was born in Zimbabwe but I have no ties there anymore. There's hardly anyone doing music like me anywhere though, so I'd say
chances are very slim of someone from Zimbabwe doing it.

What's Toronto like? Why did you decide to move there?

My family moved here when I was 2 years old so I had no part in the decision! We moved here because there was a civil war there at the time, which lead to it becoming Zimbabwe – it was Rhodesia when I was born there. I've done a fair bit of traveling and I would have to say that I think Toronto is one of the best cities going – I love it.

You've created remixes for some rather high-profile people – who would you most like to remix one of your own tracks?

Aphex Twin for sure!

How do you think the music industry has changed since you began working as Solvent? Do you think it has improved as an industry?

Well it's changed massively in that there were no digital downloads, and comparatively primitive internet, when I started in 1997. There are definitely some things about the current online-based music industry that are good. For some artists it's really worked in their favour. For Solvent, I feel that it's left me a bit lost in the shuffle somewhat.  One thing I really loathe about the current music industry is the hype machine of the big blogs. It's seems to breed a sort of monoculture consensus of what music is important/interesting.

How did you go about writing the music for I Dream Of Wires?

Well with I Dream Of Wires being a documentary about modular synthesizers, I felt that it was a must for the music to be made on modular synthesizers, so I set that as a rule for myself – it was made exclusively on modulars – no hardwired synths, no samples, no drum machines, every sound from scratch on modulars… I felt it was important to strike a balance: I wanted to showcase the modulars' versatility and capability for new and extreme sounds, but at the same time I wanted to provide an argument to the notion that modulars are only capable of noodly, overly experimental music. So I wanted to make music that has melodies, hooks and song-structures, but also to stretch things with more crazy programming and sound design. Additionally, on a more practical level for the film, there was a need for some sparse music or specific moods, so occasionally I would create pieces based on some specific scenes or notes from the director.

What does returning to your own Suction Records feel like? Does it give you an added freedom?

There is a lot of personal satisfaction, something very "full circle" about releasing an album on my own Suction Records again, since my last  Suction album was in 1999. But it was also a lot more work and financial stress. Running a label is hard work, and risky business.

I remember hearing Hot Butter's "Popcorn" when I was really young, but I don't think it really occurred to me that there was anything unique about it – I guess it was the context. I got into all kinds of synthy new wave stuff in the mid-80s, but I do specifically remember having a moment where I came to the conclusion that I was specifically attracted to music made with synthesizers and that it was my music – it was hearing Section 25's "Looking From A Hilltop (Megamix)" on the radio.

What is it about electronic music that appeals to you most?

This is such a loaded question for me nowadays because I've been literally obsessed with electronic music now for close to 30 years, it's everything to me. I guess what I really love right now is the balance and interplay between classic synthesizer sounds that instill me with a feeling of nostalgia, in combination with extreme and unheard sounds, which I'm often coaxing out of my modular synth nowadays.

In my studio, using Logic. It's nothing fancy – I'm not a proper DJ, I'm just a passionate selector.

Well you wouldn't want to put it on while you're trying to fall asleep, but outside of that I find it's great listening just about anywhere.

I'd highly suggest wearing an I Dream Of Wires T-Shirt, which if you don't already have, is available to purchase exclusively from my Science With Synthesizers webshop!

I don't put a lot of stock into recording mixes so I'd like to reconfigure this question to being a dream setting to record music, and my answer would be the studio in the video for Rush's "Tom Sawyer".

I like my own mixes because I pick all the songs so it's all songs that I like. At the moment I'd have to say this 1 because I'm really into all of these tracks right now. I'm not really an aficionado of DJ mixes.

Again, I don't put any huge stock in DJs or DJ mixes personally, but I guess I would choose to DJ alongside Stevo, the Some Bizarre label founder, during one of his Futurist nights in London in the early'80s… I would really love to be there to witness and experience the first time people had ever heard of records like Fad Gadget, Soft Cell, Depeche Mode, The Normal, etc, because that style and era of music is my
favourite.

I don't have a DJ set up, as I'm strictly a music recording artist. I do DJ out sometimes but it's just for fun and to hear good music loud and
drunk.

Depends on the context – for a mix like this that people will stream or download, I'd say the 1st track is pretty key on account of short attention spans.

The first cool record that I bought, which was probably my 2nd record ever bought actually, was the 7" for Eddy Grant's Electric Avenue b/w Time Warp. As for the newest, it was "Shatter Cone" by Helena Hauff. 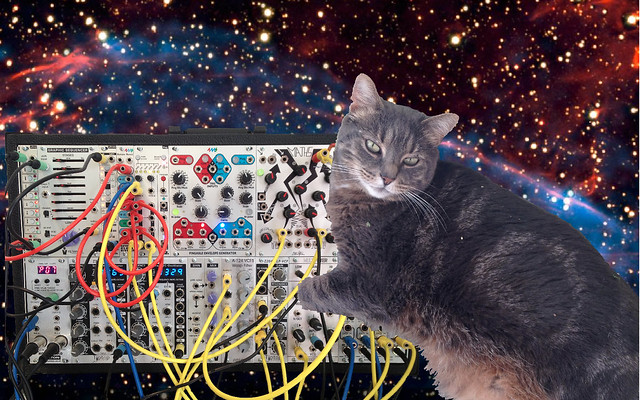 Upcoming in the world of Solvent?

I'm moving into a new studio where I can blast it as loud as I want all the time, which I hope and expect will result in good things.