Sofie K: The ‘Shine A Light On’ Mix
Minute Read

Sofie K: The ‘Shine A Light On’ Mix Music might be the main dish that London-based DJ and radio host Sofie K is serving up, but her creative pursuits stretch much further than that. Also a dab hand at writing, illustrating, designing and broadcasting (is there anything she can’t do!?) she uses every tool at her disposal to paint a solid picture of who and what Sofia is all about.

Her residency on NTS began as a platform to share her favourite sounds, predominantly in the realms of Italo, cosmic disco and synth-pop, but as her show has grown so has the breadth of her sound, which sees her dip into everything from breaks, techno and house pumpers to trance, new beat and minimal synth.

When she’s not broadcasting each month you can find her behind the decks at various fine establishments across the UK, including regular stints at club nights High Hoops and Partisan Collective in her former home of Manchester.

On today’s mix she comes through with the wiggly, melodic pumpers and driving rhythms to help you shake off those sore heads from the weekend’s club antics…

Ransom Note · Sofie K: The ‘Shine A Light On’ Mix

Hello! I’m Sofia, but I DJ and draw things as Sofie K. I’m currently in London after moving back home due to the pandemic after 5 beautiful years in Manchester.

These two objects in my room – a happy onion and the (accidentally) decapitated head of a dog dressed at the Statue of Liberty. 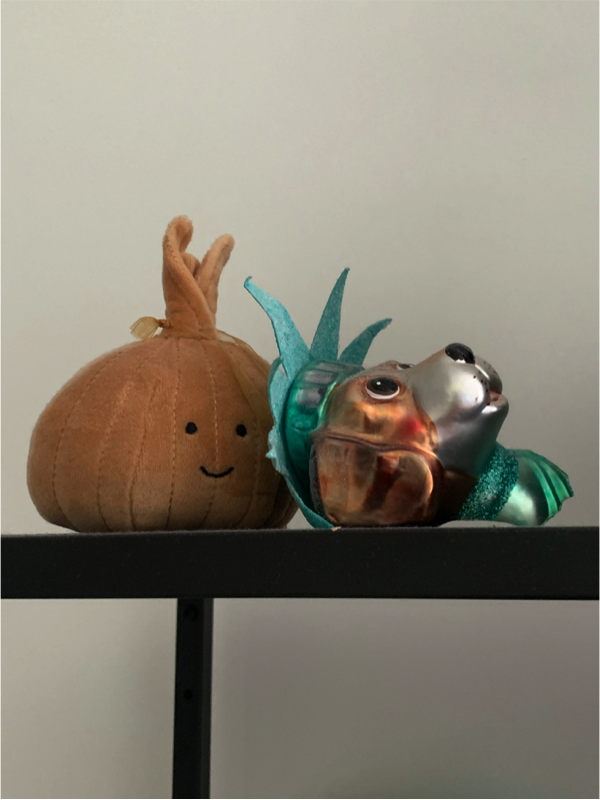 In my bedroom at my Mum’s place, which is where I’ve been for most of the past 18 months.

In the park with all your friends, during golden hour.

Something summery, cute and sexy. Or, whatever makes you feel confident.

Anywhere familiar with good monitoring, people to keep me company and comfy sofas. During lockdown, I didn’t have a set-up whilst I was moving, so I learnt how to create all my radio shows from scratch in Ableton. As a result, I’m not too fussy with formats and I can make do with just my laptop.

Ideally though, an Allen & Heath Xone (for the filters), Technics and the fanciest Pioneer CDJs money can buy.

Sheer Rage by Karima F. I think it signifies a bit of a more pumping turn in the mix, too.

I’m not sure about favourite individual mix, but there are a few people whose radio shows I like to keep up with. Anything from Paula Tape, Paramida’s Rinse FM offerings or Pirate Modernity on NTS.

Also, my pals Dar Disku, Tilly and Giovanna are firm favourites around the house.

I read an article once about a guy called Deke Duncan, who has been broadcasting from his shed in Hertfordshire for the past 44 years. The signal only reaches as far as his house, so the only person he can play to is his wife. It never stopped him, though, and he made his own jingles and everything. He seems very charismatic and clearly loves music, which is what you want in a b2b partner, right? Someone I’d love to be in the booth with, for sure!

After I graduated from my Mum’s knackered single turntable (which I had since I was around 13 and is why I started buying records) I dived right in with a Pioneer DJM-800 mixer, a couple of Audio Technica Turntables and a pair of Wharfdale 9.1 speakers.

I still have the mixer and turntables, but the speakers were off a completely misguided recommendation from my Mum’s ex-boyfriend. Traded them as soon as I could for some Yamaha HS7s and recently added some Pioneer XDJ-700s.

Moral of the story? Don’t listen to your elders, especially when it comes to equipment.

Both, and all the ones in between.

First was a Velvet Underground compilation called ‘Safety Film’ from my local shop, Sounds Original in South Ealing. They were the first band I recognised in there (a good 12/13 years ago now) and it has all the hits!

I can’t remember the last physical release I bought, but it almost certainly would’ve been from Piccadilly Records in Manchester, pre-Covid… and probably recommended to me by Matt Ward (aka Kickin Pigeon).

Bandcamp tells me that my last digital release was Shanti Celeste and Gramrcy’s most recent ‘Peach Pals’ compilation.

Does a drink count? Probably a Tango Ice Blast. Mixed flavour, of course.

A Vogelkop superb bird-of-paradise. Google it, trust me…

Wisdom of the Animal by Feon has definitely tripped me up more than once. It’s on a wicked EP from Optimo full of cosmic chuggers, but it has a wild tempo change (of the slow-down-then-speed-up variety) halfway through which I always used to forget about.

Tentative gigging! At the time of writing, I’m playing at Partisan Collective this weekend. It’s one of my favourite and most familiar spots, so I’m really looking forward to it. Their day parties were some of my first regular gigs in Manchester, their mission as a community project (rather than a ‘club’ in the proper sense) is something very close to my heart. Also, got some really exciting things happening towards the end of the year, like Saoirse’s Body Movements festival (with top pals High Hoops – shouts to you boys!) And the following weekend with Midland at The White Hotel.

In terms of designs, I might have a new charity T-shirt drop soon, but that’s something I’ll have to keep hush about for now….

A tagine is a cooking style, not a dish itself. If you haven’t used a tagine (which goes on the hob btw not in the oven) to cook your food in, it ain’t a tagine.