Today's mix comes courtesy of German DJ/producer/label owner Mathias Modica! More commonly found recording under his Munk alias, he also runs the much loved Gomma and Toy Tonics imprints, with a third one called Kryptox on the way. Somehow, in-between all his many projects, he's found the time to record this eclectic Friday mix for us comprised of 100% super rare german punk funk and new wave funk from 1979 – 84.

What does your music sound like? Can you draw what you think it sounds like (an image from the internet is acceptable)? 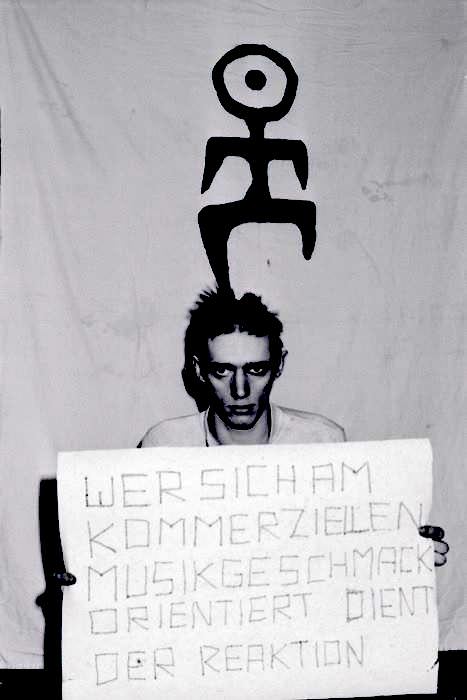 At home in Neukölln, Berlin.

Ahh… see above! Or maybe some white Helmut Lang jeans from the '90s…

'Fakten sind Terror'! From the Hamburg band Exkurs. I discovered that record in a small shop in Buxtehude/ Germany around 2002. It was recorded in 1982 and it’s quite clear that the band had been listeneing to Liquid Liquid and ESG and tried to copy that vibe. Check the bassline and drums! I have re-released that track on our 'TEUTONIK DISASTER' compilation on Gomma in 2003. Back then just some UK nerds like Nathan Wilkins and Midnight Mike understood the coolness of that track (and a lot of Japanese of course that invited me to DJ in Tokyo). So I am happy that now JD Twich from Optimo discovered that track again and has put it on his STRUT compilation.

So hard… but you should check the mixes of my friend JJ Whitefield (from Poets of Rhythm and Johnny fame). He is amazing when it comes to weird African rock and weird german kraut stuff. It’s always a big difference between people who dig rare records (but have no sense of music) and people who dig rare records but have a vibe! JJ has the vibe! And he is currently recording an album for my new label Kryptox.

I have been doing parties in Munich (my old hometown before I went to Berlin) with Baldelli & DJ Loda… the cosmic guys. This was when I started around 2002… and of course if you ever heard these Italian cosmic guys you understand that everything else is nonsense…  and ridiculous (Superstar Fashion Techno in 2018! Lol…)

The first track you play when nobody is there in the beginning (just the bar crew) sets the vibe! When I was doing my own clubnights I always insisted on being there from minute one. If the vibe is right in the first hour you know that there will be a lotta LOVE between girls & boys after the club is closed later 🙂

I wanted to be a jazz pianist and studied like crazy till age 23 – and I remember hearing McCoy Tyner records at the radio when I was 13 and asking my dad to give me money to buy some of his stuff. I think 'Enlightenment‘ was the first album of his.

Everything by Cecil Taylor or Ornette Coleman 🙂

Upcoming in the world of Mathias Modica?

My new label Kryptox gives me so much joy! I signed a saxophone player from Germany who writes unbelievably beautiful pieces for string quartet and jazz band (Ralph Heidel), also we signed a geeek Harp playing girl ..that writes unbelievable music for harp and electronic intstruments (Sissi Rada, some people might know her as patting David August Ensemble ) and I have my own album coming that I recorded with the vocalist of German indie rock band TRÜMMER. We did German disco punk. Several singles coming. The first EP with remixes by Peaking Lights and Gerd Janson out in March 2019. And we will rerelease new edits and remakes of our 'TEUTONIK DISASTER' compilations. German Punkfunk craziness.

Fuck Brexit! Fuck new right Wing momvembts over Europe! Kids have to go on the street again! Like in '68 and '85! Not to care about politics in 2018 is not cool at all! Get involved!