LOUISAHHH!!! loves playing and making records more than anything else in the whole world.  She learnt to DJ sitting with her decks on the floor because who needs tables and chairs. The H's and !'s at the end of her name are meant to turn it a battle cry or a shriek of delight – a sure way of making any word more exciting to say. It also sounds like she could be falling down a cliff, like Simba's dad in the Lion King. Tragic. Louisahhh!!! moved from New York to LA in 2006 to be part of house production duo NYCPARTYINFO, releasing records with Throne of Blood, Nurvous and Young Adults. Then she met Brodinski amongst this whirlwind of a party scene and started to make music on their Parisian label Bromance. Presumably this was when she moved to Paris which is where she is now, working mostly with her favourite collaborator Maelstrom.

The producer and DJ has had something of a ride in her life so far, some of which she hints at in the interview below that she was kind enough to answer our irksome questions for. Oh and she also did a dead good mix for us before she touches down at club fabric this weekend, which you can only listen to when you've eaten your greens.

I'm a DJ, vocalist and producer.

Louisahhh!!!, your name is meant to be like a battle cry, when was the last time you charged into battle and was it a real battle or a psychological one?

I've never been asked that! To start off on a really intense note, It was probably a spiritual battle, one with ego. I try hard not to fight anyone or anything as an ethos so most of the battle is the path to self-surrender.

I was on drugs when I made that decision. It seemed wise at the time.

Based in Paris, what tourist attractions do you wish would go away?

I love running around the Louvre, but actually going inside gives me an anxiety attack almost immediately. Also, the Champs Elysees is pretty terrible, the times square of Paris.

What has Paris got that New York hasn't, why did you move there?

Paris has Bromance, of course! Also, I think it's a lot easier to work and tour as a techno artist in Europe. I didn't start really being able to tour in America until I moved here, so I think there is a certain 'exotic' quality that is attractive in both places.  It's also given me a great opportunity to practice my shrugging.

Medjool dates but they're off limits because they're basically crack.

What was the last tweet you’re embarrassed about sending?

I posted a #sadfaceselfie (a hashtag I invented that describes exactly what it is) on Instagram and then felt awkward so had to post two silly dog photos to recover.

Has social media ruined our lives?

I was listening to Marc Maron's interview with Harmony Korine' today and they were talking about how the whole scenario of the film KIDS wouldn't even exist today. Chloe Sevingy's character would just have texted Telli to be like 'you gave me HIV' instead of having to spend the entire movie looking for him. Similarly, how there is no ability to make an 'on the road' or journey movie anymore because every place on earth is connected, you can't get lost, there's no danger. It made me think about what adventure means in modern life (in developed countries, at least); there seems to be more attention paid to emotional, internal territories now because the USA killed their space program so we can't go farther out.  I'm curious as to when we will hit the turning point and stop using social media for 'selfish' pursuits, becoming so sick of our selves that it becomes an altruistic platform.  A close friend died in a motorcycle accident last week and in two days, $10,500 was raised to help support his family.  That's amazing and that's social media too, you know?  I sincerely hope that this is the evolution. I'll try to be part of it, anyway.

Last film you walked out of?

Ha, this movie about the catacombs in Paris called 'As Above, So Below’. I walked out after a scene shot at Showcase (a club where I do my residency) that involved a ruffian named 'Papillon' inviting the protagonists to a secret rave in the catacombs. Also, there were girls dressed as baroque French maids dancing on platforms. I had to leave.

Probably running along a river or driving fast at night.

Whatever makes you happy, baby.

Four decks: Vinyl and CDJs, live, for like four hours in a club with a great system and an openminded, present crowd. If mobile phones could be checked at the door, that would be great.

The first track, 'The Last Song' by Trisomie 21, was first introduced to me in like 2011 by my partner in NYCPARTYINFO/half of Pipes, Stevie Be. It was a really emotional week that I recorded this mix and I couldn't stop listening to this song. It's really held me in a way that only music can.

That's almost impossible to say. One that was really important was Cut Copy's FabricLive mix (2006) because it was the only CD I had in rehab, my only connection to this life that I was afraid I couldn't have as a sober person, and because now I'm living beyond what I thought was possible. One that I'm really loving right now is RP Boo's Fact mix (2013), it's such great energy.

I love i-F. Everything he plays, and the style with which he executes it is just impeccable. Maybe it would be him. Maelstrom (my collaborator and creative partner, with whom I get to play a lot) is a close second. No, Mael is first then i-F. My life is a dream! I have what I want. 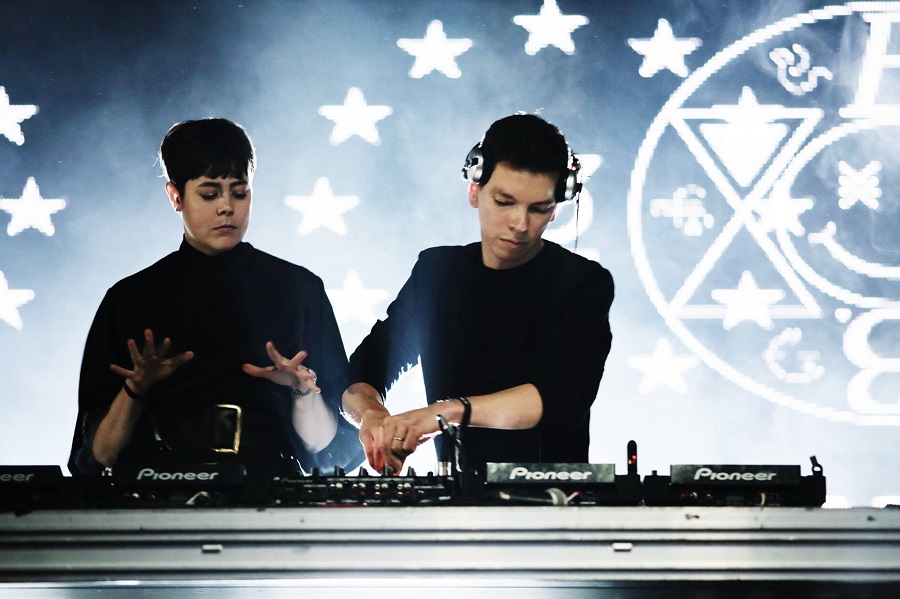 I had a Numark CD Mix 2 that I learned how to beat match on when I first moved away from home as a teenager, but I was such a degenerate that we had no furniture in the apartment so had to sit on the floor to practice. Jeez. After that, it was Technic 1200s and a Rane TTM 57SL on a real table where I could stand to DJ, haha, but I left all that in LA. I'm presently between set ups.

Every single track is important!

Oh man, the first were some Le Tigre remixes of Deceptacon I think. The last records I bought were Trevor Jackson’s 'Format', Holly Herndon’s 'Platform' and the Daniel Bell & DBX 'Losing Control' EP in a mad spree.

A Norwegian Fjord horse- 'The horse in a pony suit' Population One's 'Out of Control' changes tempo in the middle of the track, or maybe the kick changes place or something inexplicable and wretched and sneaky. I always train wreck it and no longer even try to play it because every attempt has ended terribly.

Upcoming in the world of Louisahhh!!!?

Anything else we need to discuss Find LOUISAHHH!!! here and playing in the most excellent of discotechques club Fabric this weekend. Full details here