His take on dance music is perhaps more abstract than most, utilising rough and ready soundscapes and layering the strange above driving percussion which has a profound and punchy impact on the dancefloor

His take on dance music is perhaps more abstract than most, utilising rough and ready soundscapes and layering the strange above driving percussion which has a profound and punchy impact on the dancefloor

Rounding off a busy week we have a showcase in hard hitting electronics and the experimental from one of our favourite producers of the moment, Koehler. Originating from Bristol but now based in Italy he has released an impressive array of material for the likes of Whities, ESP Institute, Berceuse Heroique, Skude, Die Orakel and many more.

His take on dance music is perhaps more abstract than most, utilising rough and ready soundscapes and layering the strange above driving percussion which has a profound and punchy impact on the dancefloor. It's powerful stuff. He is influenced by circumstance and there is a conceptual undercurrent which runs deep through his musical lineage. One that we love.

We invited Daniel to record a mix for the site and he didn't hold back. Trust us.

I’m Koehler and I have been releasing music since 2013, most recently on labels such as DISK, ESP Institute, Whities and Stabudown. I’m originally from Bristol but currently based in Italy. I’m most certainly confused by reality, terrified of death and completely unsure of what the purpose of life is but making music regardless because why the hell not?

Think this painting of Ahasuerus at the End of the World by Adolf Hirémy-Hirschl is a good indicator how my music sounds, at least on the good days. 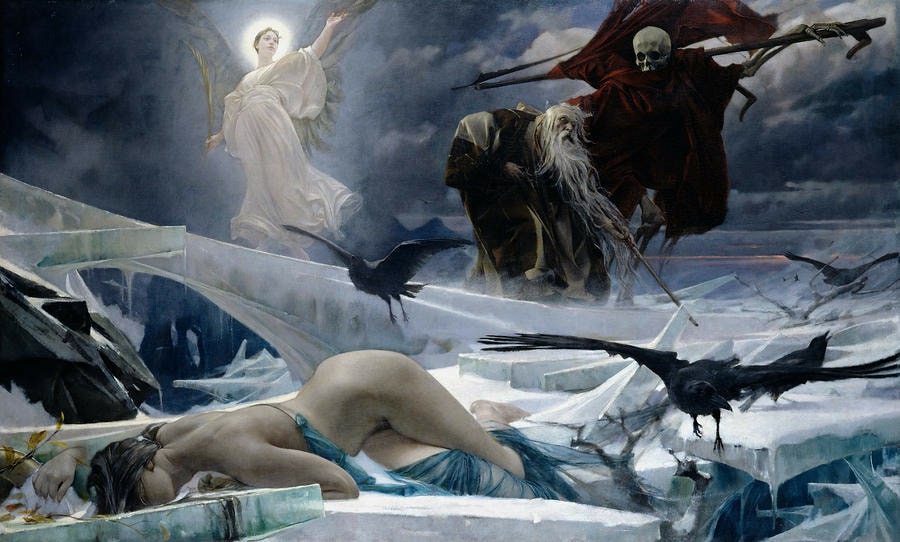 It was recorded at my home studio with turntables and Traktor so I could use both vinyl and digital .

Ideally should be listened to whilst being chased by some giant mythological beast as you desperately run across a bizarre windblown , moonlit landscape.

An invisibility cloak if you can find one.

Would not mind recording a mix as the sun sets over the Pyramids !

Well I love all the tracks but my favourite in the mix is probably October and Borai’s ‘Fatal Rumba’ which came out on Happy Skull earlier in the year. It really is a gem! Also I’m excited about the two new tunes from myself that I included in the mix which will both be coming out in the new year.

No question, Progression Sessions Volume 1 mixed by Ltj Bukem with MC Conrad . Every track is amazing , the mixing couldn’t be any more perfect and Conrad’s MCing sends the whole thing into another dimension.

Oooooooh that’s a tough one, probably a toss up between Dj Randall and Villalobos.

My first Dj set up was a pair of Gemini turntables and a two channel mixer that just had a crossfader and two volume faders and that was it ! Thankfully since then I’ve upgraded to Technics which are actually capable of holding their pitch haha.

Definitely the track you start with, it’s up to fate what happens after that anyway!

Really can’t remember the first record I bought but it would certainly have been a drum n bass record , probably Decoder ‘Circuit Breaker’ or Nasty Habits ‘Shadow Boxing’ or something like that. And the last record I got was the King Britt Underwater Garden Dub of ‘Flower’ by Soul Dhamma which is a pretty transcendental house record.

It would probably be a kiwi, tastes horrible but is damn nutritious !

A shark or a bat.

Currently have 4 releases lined up for the coming year and am recording my debut album.

There is far more to know than can ever be learned in a single lifetime , so get cracking!