Ambient, electro and techno from the Hypercolour producer and Super Hexagon co-founder.

Ambient, electro and techno from the Hypercolour producer and Super Hexagon co-founder.

Berlin-based vocalist and producer J. Wiltshire crafts his own enchanting brand of ambient, electro and breakbeat techno which has come through on releases for Hypercolour, Musar Recordings and Black Orpheus.

He's also one of the minds behind Super Hexagon, the Leeds-based label that was spawned out of the club night of the same name. Now their focus is firmly on releases, and since its inception four years ago it's been a platform for both J. Wiltshire and fellow co-founder Alma Construct to share their own music, as well as instalments from the likes of Aldrich, FFT and Lårry.

Following a return to Musar earlier this year for his debut EP Resa, he steps up for this week's Ransom Note mix, bringing a taste of the influences that steer his own production...

Hi! I’m Jacob, a human. I release tunes under the name J. Wiltshire along with running a record label called Super Hexagon.

I like to make ambient, breakbeat techno and electro-influenced music. I also draw alot of inspiration from film and video game scores swell as more traditional music. For the last few years I have used my SH101 quite a lot, so I’ve attached a picture I drew of it below. 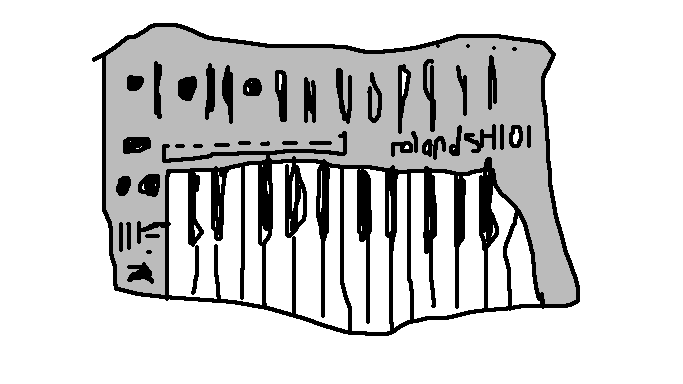 In my bedroom of my previous flat here in Berlin where I have been living for the last 3 years.

During mild exercise activities that work well at 120bpm.

Anything that works for the purpose of utility or for expressing yourself freely.

A sunny day somewhere outdoors with a nice rig.

Probably Kevin Martin / The Bug so I can play around with his DJ set up and do loads of rewinds.

My first set up was Virtual DJ on a Dell laptop but now I’m very lucky to have a pair of technics.

I think the track at the start can be the most useful as for testing the waters but also for the people deciding if they want to stay or not!

Neil Young - After The Gold Rush

I have a new record out November 1st on mindcolormusic. And on Super Hexagon we are gearing up to release a digital compilation of music from a variety of wonderful artists before the end of the year.

Not from me, thanks for the questions and your time!

Unpredictable and uplifting sounds from The Smartbar resident and Femme Culture producer.

Members of Trashmouth Records, Fat White Family & Paranoid London join together for several rework and edit volumes. Listen to the first in full...

Black Cadmium: The 'Shine A Light On' Mix

Squelchy acid, electro and techno from the Naïve and Vault Wax producers.

Raunchy Italo, driving synths and hypnotic acid from one of the leading voices in East London's queer scene.

A Psychic Yes is a producer with whom some will be familiar and others not - with releases on the likes of Tech Startup, Kalahari Oyster Cult and Schloss his sound is uniquely individual.

Paurro: The 'Shine A Light On' Mix

Paulina Rodriguez represents some of the most intelligent, cutting edge dance and electronic music to emerge from Mexico and her carefully orchestrated sets span a breadth of styles and sound which touch upon music native to the country and sounds from far beyond.