Nine hour sets in the small, odd hours of the day allowed her to hone her skills and amass a reputation as an intricate and well versed selector.  She knows how to read the room.

Nine hour sets in the small, odd hours of the day allowed her to hone her skills and amass a reputation as an intricate and well versed selector.  She knows how to read the room.

Ceri is a producer and disc jockey who has made a name for herself through hard work and graft. She hasn't taken the simple route as any former resident of infamous London party Jaded will tell you. Nine hour sets in the small, odd hours of the day allowed her to hone her skills and amass a reputation as an intricate and well versed selector.  She knows how to read the room.

In 2017 she launched her label, Find Your Own Records. The name seems like little coincidence for a dj who has worked tirelessly to carve a niche for herself with releases on the label having gone on to be supported by the likes of Ben UFO, K-Hand, Ryan Elliot, Move D and more.

Ceri's own musical taste is broad, at times susprising and as delightful on the dancefloor as it is in the headphones. We are delighted to be able to feature her as part of our mix series.

I am Ceri, a Welsh blooded, London raised DJ and Producer.

Who I am is a constant work in progress, one by one unravelling the layers of the never ending onion, taking ten steps forward, five steps back, and repeating the process. I am currently in London, and often in other dimensions. I am a multifaceted being, who embraces both the dark and the light, and all truths and perspectives.

My music sounds like everything I am feeling at the time, either from myself, the world around me, or a combination of both. I also love music that sounds like it’s from the 70’s, 80’s or 90’s.

As suggested, I am using an image from the ye good old internet; a piece called ‘In God We Trust’ by Douglas Hale, as I feel it is not only partly representative of this mix, but also of our current time, and the history and context of the dance music we know and love today.

His art is really amazing, it’s worth checking some of his other pieces, the meanings behind them are open to individual interpretation, and can be very thought provoking and interesting, and he discusses more about it in this interview. 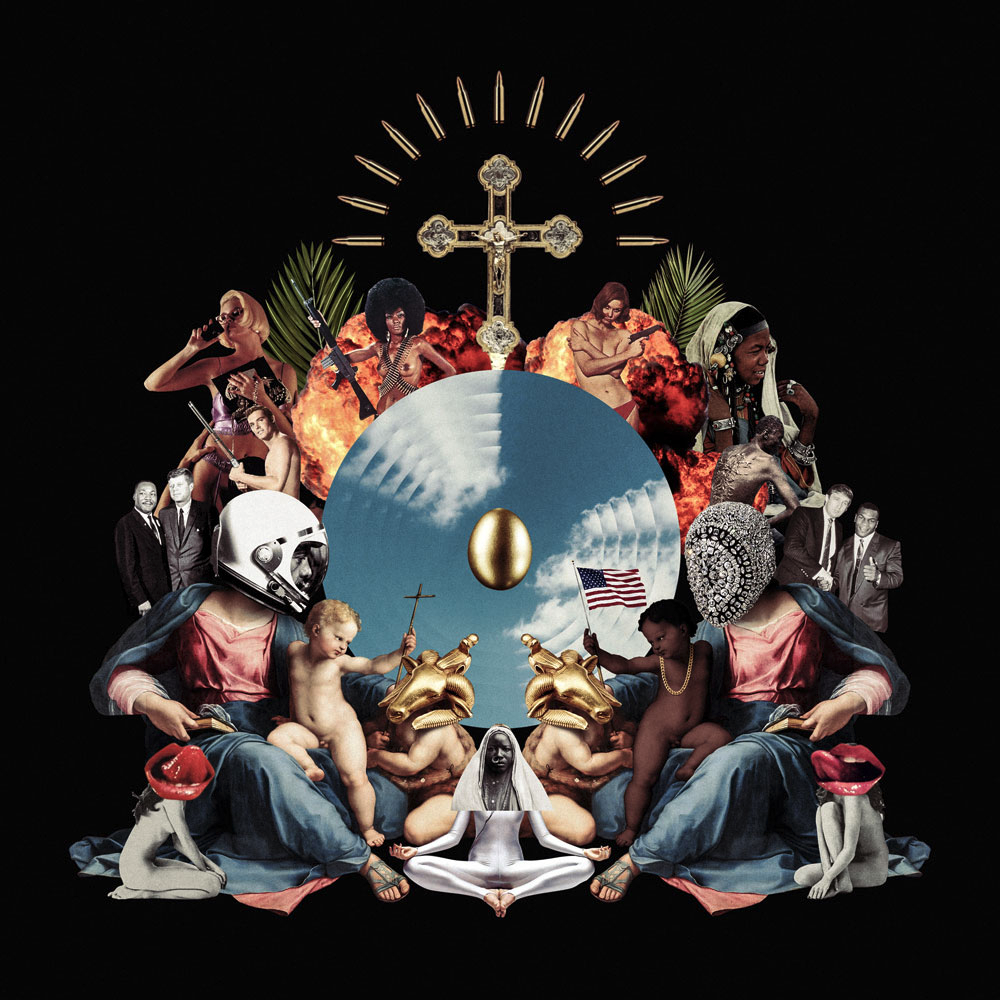 In my Music Studio in East London, the second time I have been in it since the lockdown restrictions in London have been relaxed.

In a botanical garden, or a secluded tropical beach, with your best friends, on mushrooms.

A smile and some hugs.

The same ideal setting I suggested to listen to the mix, with any Rotary Mixer, Technics 1210’s and CDJ2000’s (the vinyl vs digital debate is silly, some tracks are vinyl only and some tracks are digital only, so to get the best of both you need both).

Levon Vincent - Hope for New Global Peace (Part 1), because I am hoping that current circumstances and situations in the world and society are truly bringing us closer to global peace.

I also included Maya Angelou’s speech / poem ‘I Will Rise’ over Four Tet’s ‘Daughter first variation’. The message of ‘I Will Rise’ is about female empowerment and strength, and the resiliency, strength, and beauty that black communities continue to show through hundreds of years of oppression and discrimination. It is a reminder to us all that through any pain, we will rise, which also reflects part of what I have been going through during lockdown, facing and overcoming a lot of stuff, to come out stronger and clearer.

Oh that’s a hard one, I love so many different styles of music and different ones are appropriate for different settings.

During the lockdown, Mr. G has released 20 mixes of various genres, and they’ve all been amazing and taken me on a different and much needed journey. I especially liked the soul, funk n disco mixes, the more eclectic ones  and the hip hop one. He’s taken many of them down from his soundcloud but you should be able to catch some if you’re quick!

Larry Levan, a true Pioneer and inspiration to so many. Without him, we may not have house music as we know and love it today, and as much as I love more current house and techno, I also love disco and club classics that would have been played at Paradise Garage. It was also such an important time politically and sociologically, standing for; radical inclusivity and everyone from different backgrounds coming together to share the love of music.

My first DJ set up was Stanton turntables and a stanton RM-3s 3 channel mixer. I now have pink Technics 1210’s and a Pioneer DJM600 at home, but I would really really like a Rane MP2015 or the Master Sounds Radius 4V mixer... so Rane or Mastersounds, if you’re reading this… hi ;-)

The first ever piece of music I bought myself was a reggae compilation tape when I was about 8 (who remembers tape?). My first vinyl record was Layo and Bushwaka Love Story, from their amazing 2002 Night Works album. The last records I bought were a selection of classic disco records, during a recent late night lockdown discogs session.

My spirit animal; a White Tiger, signifying acceptance of the light and the dark, and to quote ye old internet again; “The White Tiger is renowned for its strength and majestic fierceness. Its serene energy and power represent fearlessness and spiritual awakening. It traditionally symbolizes strength, courage, war, instinct, willpower, courage, vision, and clairvoyance.” Also very apt right now with what’s happening in the world.

Like many DJ’s who have had their gigs cancelled recently, I have had a lot of time to think and reset during the lockdown, and have had so many ideas for new creative projects and collaborations, which I am very excited about, but can't say too much about yet.

We are all waiting to see how the world restarts, and I hope it will restart kinder, more considerate to all beings, ourselves, and to the earth itself.

The mix has loud and soft parts, dark and light parts, and is a representation of my lockdown journey so far. I was mostly totally alone the first two months, with hardly any human contact. At first I found this hard, but after a few weeks, I really got into it and used the time for a lot of self reflection, healing and detoxing (of the mind, body and soul). There were some dark times, and some massive realisations and understandings, and mental breakdowns, or as I like to call them; breakthroughs.

The mix goes on a similar journey, once you think it’s reached its peak, or become happy, then another layer is added, it gets darker, and another journey and lesson is needed to progress, or overcome, to reach the next stage, just like life.

But it will always have a happy ending, if you’re prepared to do the work and aim to break past your conditioning. This is something I am still, and will always be, working on and excited to enter the next chapter of.

TALsounds: The 'Monday Is OK' Mix

Following the release of her new album on NNA Tapes, the experimental musician shares some of her all time favourites.