This month marks the release of an album which has been previously teased, promised, declined and reimagined. Golden Teacher are a Glasgow based group, made up of wanderers and vagabonds they have stumbled upon something quite special.

"No Luscious Life" follows on from a crafty assortment of both self released and signed music which has emerged across the past four years. Releases on the likes of Optimo Music and Sounds Of The Universe have helped to cement the groups name whilst their own self released material has helped to demonstrate a sense of capability and resolve. Golden Teacher don't tend to do things by half measures. All killer, all filler they have long since cut their teeth in the local Glaswegian music scene with each of their six members entertaining a variety of backgrounds. The result? A delicate balance of personalities and influences meets pure genius and musicality.

We spoke to Oliver Pitt about the new album, the concept behind Golden Teacher as well and recording at The Green Door Studio…

So, on the eve of a new album, are you surprised by how far you have come as a group?

"In some ways yes – we’ve done things and played places I never thought we would, it's always a pleasant surprise how many people like what we do. But in other ways I feel like we are still doing what we have always been doing. Not that we haven’t progressed as a group – but our approach to music making has stayed the same. We started as an unplanned, improvised, dance recording project and we still are."

You all come from quite singular musical backgrounds as individuals, is this an inspiration, a hinderance or benefit when recording as a group?

"All three. But mostly an inspiration – if we were all the same in our respective approaches, inspirations and desires, it would no doubt make everything easier, but it would also make it far less interesting. One of things I’ve always enjoyed with Golden Teacher is at any one time, it feels like the music is being pulled in six directions at once. Even when we start out with a specific idea, there’s so many chances for that to change. In the writing, improvising, recording, mixing, and editing theres potential for anyone to completely change the direction or sound." 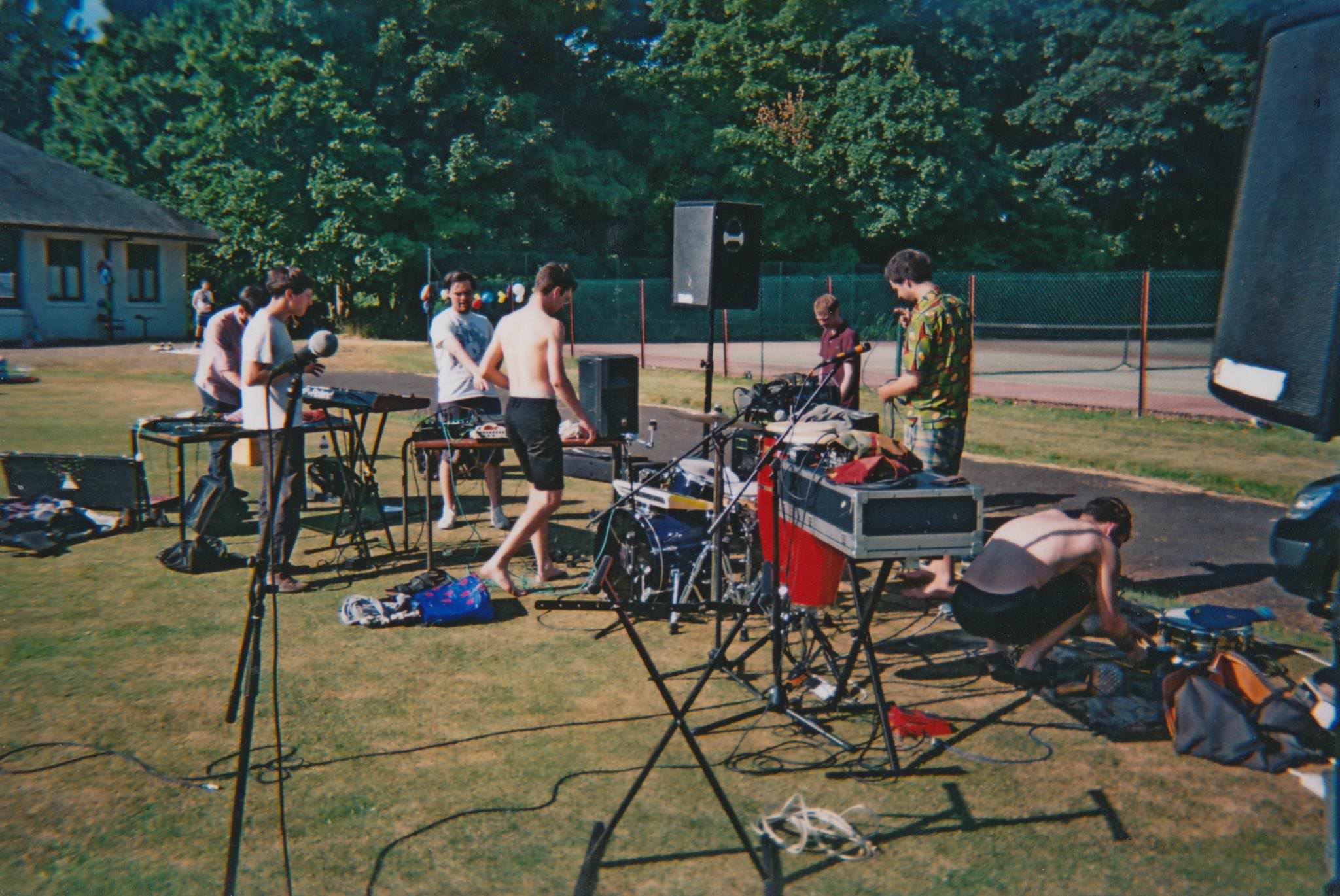 Glasgow has played a key role in the development of your own tastes and the sound of the group as a whole. Why so?

"Glasgow has a rich musical history spanning many musical sub cultures. Prior to Golden Teacher I was mostly playing in a hardcore punk band called Ultimate Thrush – in ways it seems a million miles away from the funky disco of 'Sauchiehall Withdrawal' – but in the context of Glasgows’ music scene it's closer than it appears. Optimo had Ultimate Thrush play twice at their club nights. One night it was totally unannounced, half way through a track, dance floor packed, we crept onto the stage in the dark. Wilkes cut the music and we launched into our 15 min set of powerviolnce punk songs – half the crowd fled. Optimo have always incorporated unusual live sets into their club nights and always mixed  ‘non-dance’ music on the dance floor. This kind of attitude, to mix gigs into club nights and have live bands playing in clubs feels almost normal in Glasgow. We realised this when we tried to go on tour and said’ ‘we’re a 6 piece live party band but we only want to play at clubs’ in Glasgow this was easy but in many other places they’re weren’t sure. Either the stage was too small, the PA wouldn't 'work' with a band, or people wouldn’t keep dancing etc. It took a lot of persuading to convince venues and promoters that the public actually quite enjoy seeing a full live band playing dance music rather than just one man and a laptop."

How important are spaces like The Green Door Studio?

"The Green Door has been our spiritual home since the inception of the group. In fact Golden Teacher was conceived and born in its velveteen walls. Our first EP ‘Bells From The Deep End’ was recorded as part of the N.E.E.T course (Not in Education Employment or Training) which myself, Rich and Cassie were on. As part of the course we were given free recording time to try out new projects. That's how Golden Teacher started, as a recording experiment. It was only later when Optimo asked to release the tracks that we turned it into a ‘band’. The Green Door is really a unique place, a sort of music institution that puts experimentation, unorthodox recording, and collaboration at the forefront. It's pretty rare to have a supportive place like that offering free training and recording time for young musicians. Of course there should be more places like this but they run on a shoe string with constant funding cuts and a lot of hard work." 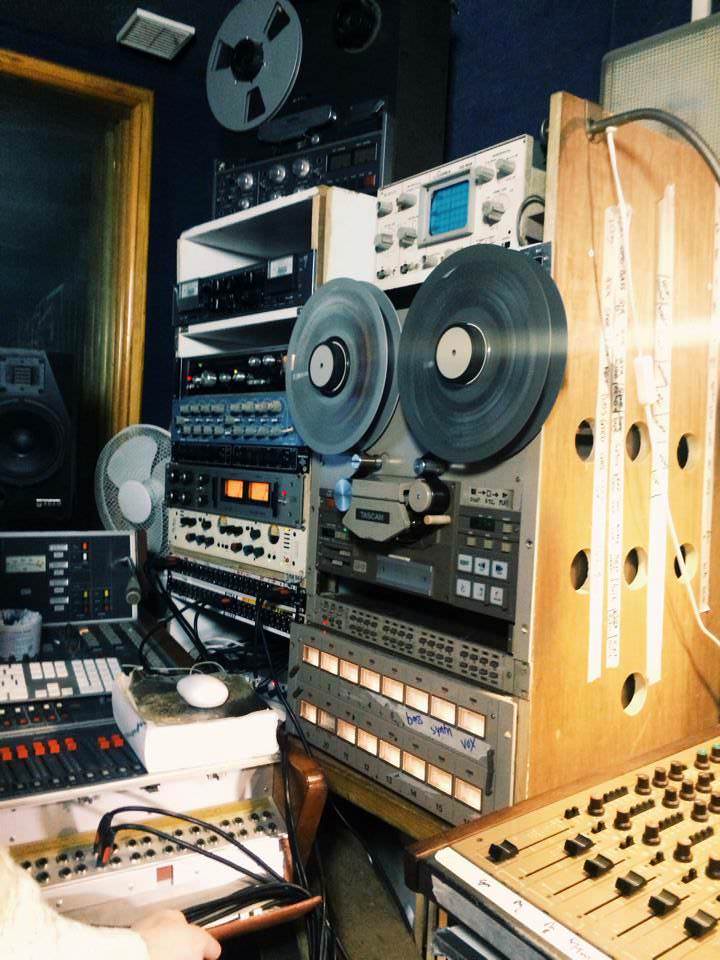 As a group have you ever aspired to produce music like anyone else? What are your key influences?

"Not really, individually members will have their own influences and there are obviously artists that we all like but as there are six of us and we are all pretty different, there was never an agreed style or artist we were trying to emulate. You can hear it if you listen back across our records, they vary in style from record to record. Our last EP 'Sauchiehall Enthrall' was a more dark, experimental vibe. For that session and around that time we were intersested in complex rhythm and time signatures, and made a whole EP with almost no melody. Tracks on this new record are far more upbeat and melodic, more of the classic disco influence, whilst the B side is again more dubbed out and expansive. But it would be pointless to list a few artist as key influences, it would just be my personal take on a six piece puzzle."

The ethos behind the group sees you maintain a low profile of sorts but live performances are extravagant and flamboyant. What are you looking to achieve when you perform live?

"We would like to play more but it's a nightmare being in a band with six people, especially when we’re trying to play club nights rather than just gigs. There's a few important things for us when we perform, we try and always combine planned pieces with sections of improvisation. The main reason for this is it makes it more interesting for us – it has the possibility of going off in unkown directions, and if the band are excited about what they’re playing the audience will be too. Sometimes you see groups and it feels like they’re a cover band of their own songs, there's no energy, everything is too polished and well rehearsed that it can feel dead. We try to keep it loose and open to change – the relationship between the audience and performers is completely connected, if there is energy with one, it will transfer to the other."

How did you find the process of recording the album?

"Our recording process has always been the same. We never have an end result in mind. We go into the the studio, record as much as possible, experiment, improvise listen. Everything is done live and recorded straight to tape. I’m not an analogue puritan at all but one thing it heightens is the immediacy of the music. You can’t keep changing things as easily when your working with tape, so it's more about the live take. When recording on a computer, the possibilities are limitless. You become a perfectionist as everything can be changed. But with tape, your stuck with what you have. Even the mixing is done completely live in real time. This process shapes the song as much as any instrument. At the end we’re left with a selection of tracks, each of which there are various mixes. This is the time when a decision is made about which tracks we like and which work together as a potential release. Every time we’ve recorded we’ve scrapped about half of the tracks, this is why previously we’ve always released EP’s as there is often 4 or 5 tracks that work really well together. 'No Luscious Life' is no different, it's just a bunch that we felt worked well together. We’ve always found it funny how much importance the press puts on Albums over EP’s or singles, especially with dance music which is obviously more suited to Singles / EP’s. I guess our music sits somewhere between dance music and something else, it's produced and mastered in a way it should sound good in a club,- but it's also hopefully complex enough to be interesting to listened to at home. I think 'No Luscious Life' shows both sides of what we do – there's the more upbeat disco influenced tracks and the more experimental, dubbed out improvised pieces too. This isn’t technically our debut album – we released a cassette album on Akashic Records in 2014 (soon to be reissued on vinyl by Goaty Tapes in 2018) but it's our first long(ish) player on vinyl.