With 2017 coming to a close, we come to the conclusion of The Golden Ravedays – Superpitcher's epic 24-track album released in 12 individual parts throughout the year. Aksel Schaufler has certainly never been shy of making sweeping, Romantic music, but he's always displayed the necessary sense of precision and balance that would otherwise find the whole thing slipping into schmaltz territory. The material he's released this year has been impossible not to get lost in – all of the tracks are at least 10 minutes long, with a number nearing the 20 minute mark. Taken as as whole, it's a little overwhelming, but then again I suppose that's sort of the point – absorbing The Golden Ravedays, however you choose to do it, is an experience sadly often lacking in today's chewed-up, regurgitated, feeding frenzy of a music industry.

This month brings the release of the final instalment, as well as a special boxset – which will be available to buy later this week – that comes in two formats; one which contains Chapter 12 plus a poster and a booklet, and a deluxe one which contains all 11 other instalments as well. We caught up with Superpitcher to talk about the project…

Hi Aksel! The Golden Ravedays is your first album as Superpitcher in seven years – were you simply busy with other projects or was there another reason for the gap?

Yes, I was busy with other projects and a few big changes in my life. Since Kilimanjaro was released I moved from Cologne to Paris and built a new studio. The first album I produced there was King So So. I also produced a few remixes for artists like Paradis, Joakim, Rebolledo and Michael Mayer, and tracks for a few compilations. Apart from that Rebolledo and I started the Pachanga Boys and our label Hippie Dance. Traveling for shows always takes its toll on one’s calendar but that aside, I felt it was the right time to release a new studio album. In many ways the album came to me without me specifically planning it.

How did you arrive at the decision to release the album in twelve parts over the course of the year?

I created The Golden Ravedays’ body of sound in one month and in the end there was so much material that I needed to find a good solution for the release as one album. I decided the best option would be to divide the material into 12 chapter albums under one umbrella album over a year period.

How have you found the process? Has it panned out as you expected? What’s it been like having the feedback so spread out?

The feedback overall is very positive. The process has been a combination of so many things: thrilling, nerve wrecking, creatively inspiring but most of all I found it amazing to be part of a production process that was dynamic. It felt like being part of a river and now that the end is in sight I realize even more so how special this journey has been for me. In many ways it panned out as I expected but in others the process was surprising. For instance, twelve different artists created the covers, and seeing how the art direction unfolded during this year was very special. I never knew what to expect and was thrilled with the results!

Was there ever any question of editing the material into something more concise or did you feel that would lessen the project?

Of course this was something that posed a big challenge for me. For the three years that I worked on this album it was always a question in my mind and I tried many alternatives but the answer in the end was always the same. The sound had to run its own course and I realized I should not interfere too much with my instinctive desire to produce longer tracks. If I shortened the tracks I wouldn’t say that it would have lessened the project, but it would have been a different project altogether.

For me, part of the album’s strength lies in its refusal to bow to conventions of timing, both in the number of tracks and the length of the tracks themselves. Do you feel as though patience is becoming an underheralded virtue in dance music?

Thank you. I do believe patience is an underheralded virtue in the world right now including the dancefloor. Time is speeding up and we are struggling to keep up with all the pressure around and inside us. Everything has to happen yesterday and everyone seeks thrills that should instantly gratify. I did not specifically make this music in an attempt to slow people down, but to me I see 24 different stories that are part of one overall story and my hope is that people would take the time to listen to all of them. The Golden Ravedays is a very long poem; a metaphor of how time, space and sound interact.

Where did the album title come from? Is it a feeling of nostalgia, or something else? Are we due a microhouse revival?

I wanted the word “rave” in the title and somehow it developed into The Golden Ravedays. There is no feeling of nostalgia for a forgotten rave period. I see it more as a present-day celebration. No revivals! Only revelations!

How do you see Superpitcher evolving as a live project with this new material?

I have not made any plans for performing this material live but I do have many ideas for it. Watch this space!

How do you go about finding balance between all your projects?

It’s hard but I try my best to stay sane by listening to a lot of Reggae.

Tell us about the Tanda Tula Choir album you’ve just released. How did it come about?

I went on Safari in South Africa in 2015 and was amazed by the staff choir of the camp where we were staying. It was a very beautiful camp in Timbavati and the staff performed every night for the guests singing in their native Shangaan language. I loved the raw beauty of their songs and I offered to record a CD for them to sell in their shop. In the end I decided to start a new label called Bush Recordings for future bush music adventures.

Any Pachanga Boys stuff on the horizon? Is it time to reissue ‘Time’?

For the time being no. Both Rebolledo and I were so busy with our other projects that we have not been able to meet in the studio. Hopefully soon!

I hope to learn how to play the waterphone next year and plan to take a long vacation after the number 12 release in December!

Anything else we need to cover?

Just say which song and I’ll give it a shot!

The Golden Ravedays LP boxset is out soon on Hippie Dance, and will be available to buy from all usual webstores this week. Check it out below. It looks pretty fucking dope. 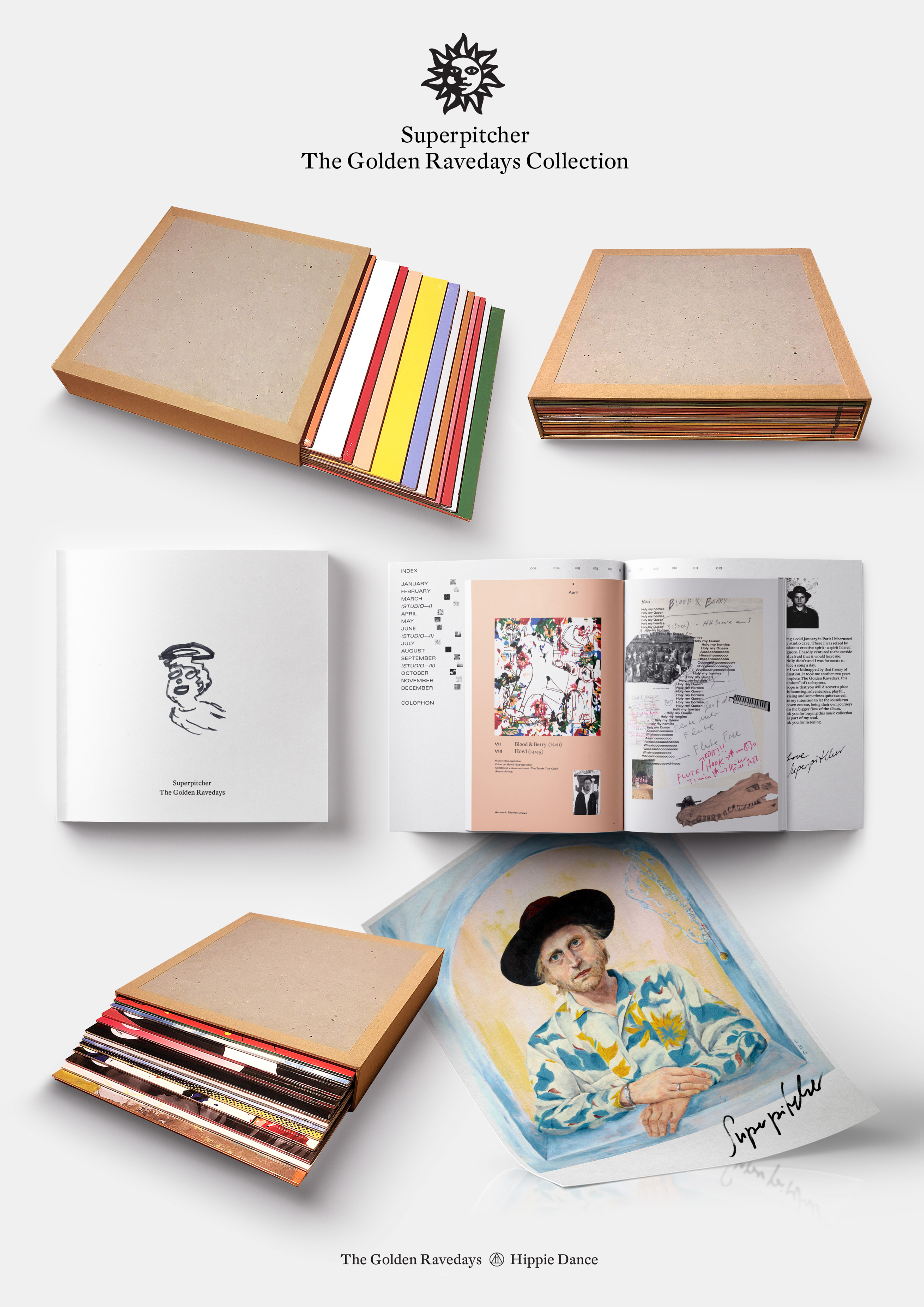