Variety is the spice of life. Why stand still when you can run wild?

Andras is a producer who has been busy since 2011. Perhaps better known by his name, Andrew Wilson, he has released a spectacular array of music across a plethora of record labels under various guises and monikers.

Art Wilson makes ethereal, dream like soundtracks for imaginary stories and contemporary dance. Andras Fox releases lo-fi funk and house which is rooted in 80's funk, pop and soul. Berko creates ambient, classical esque soundscapes whilst the House Of Dad draws upon a personal sphere of influence and nostalgia. Then there's the Wilson Tanner project in which Andrew collaborates with John Tanner aka Eleventeen Eston. This is a project which draws upon the experimental, abstract and physical. It embodies field recordings and live hardware aplenty.

So, who is Andras? His latest EP is due for release on Munich based record label Public Possession. An imprint with whom he had previously formed a friendship. This time Andrew draws for the simplicity of a one word moniker – it suits the music which follows. The EP is arguably his most club focussed to date, its faster paced and hints at notions of tribal house and trance. However, it is presented in the same abstract style which we have become accustomed to from a producer who never fails to surprise and intrigue.

Explain your relationship with club music, what drew you towards the scene and culture?

At thirteen, I liked the music. I liked the parental advisory sticker on the cover of a record called HOW DO YOU LIKE BASS? The steel bash-plate flooring of Sanity music in Southland Shopping Centre, back when they sold records. I liked the listening stations with turntables inset into yellow laminate furniture and the half broken chunky headphones. I had visions of scaffolding, pyrotechnics and helicopter transfers. I was too young to go to the stadium shows and festivals, but I tacked those flyers on my wall alongside pictures of footy players. Those early fantasies were quite distinct from the experience of clubbing that would come later.

You have worked under numerous aliases and guises, why is this and what does each offer you from a creative perspective?

ANDRAS is my dance music alias. I culled the fox years ago, but like all introduced species, it’s been hard to eradicate. Other aliases were project specific and enabled me to try new things, but i’m focussed on clarifying my output as ANDRAS at the moment.

The new EP for Public Possession features two ’skits’ of sorts made up of white noise and glitches, where do these recordings stem from and how important is field recording in your wider musical trajectory?

BIG BOOM is a collage of sound from a user-uploaded video ’32 Speakers Get BLOWN UP With Ali-A Intro!! *CAUGHT FIRE*’. A kid with a camera pumps an EDM track into tiny speakers with a loud amplifier until they explode. It’s a kind of genesis tale in reverse – a bang that signifies an end of meaning rather than a beginning. Speaker destruction videos are a whole category of their own online, and if this EP is a work of portable speaker iconoclasm, this is an important ritual we should all undertake. We never really get a clear sense of how a lot of these ubiquitous devices work – what’s inside, how they connect. They’re so impervious, sealed, waterproof (IPX7 rated) that to take a speaker apart and set it on fire might be actually intellectually justifiable.

WAX.FM is a collage of interstitial sounds from the documentary THE BURDEN OF DREAMS, specifically a scene where a member of the film crew tries to establish radio contact with the outside world from within the Amazonian rainforest. The scene was rich with the hallmark sounds of multiple technologies – the shortwave radio, the wax cylinder, the orchestra and the pig. Techincally, the sound probably more closely approximates PINK NOISE but culturally I would agree that it is best denoted as white. It’s a reminder of technological failure – struggling to make a connection, to get a clean signal, as opposed to the seamless connections of a bluetooth’d world. It is a reminder that getting music to (or from) nature involves a process of both technology and culture.

Field recording is a weird term to me, as it insinuates a notion of empty space. I am not particularly interested in the sounds of unpopulated agricultural land. My musical output is influenced more by a general recording practice; bits from telly, online video platforms, film soundtracks, etc. Authenticity isn’t the primary motivation for me to record, and this record is a critique of what we culturally imagine as ‘jungle sounds’ rather than an ethnographic document. 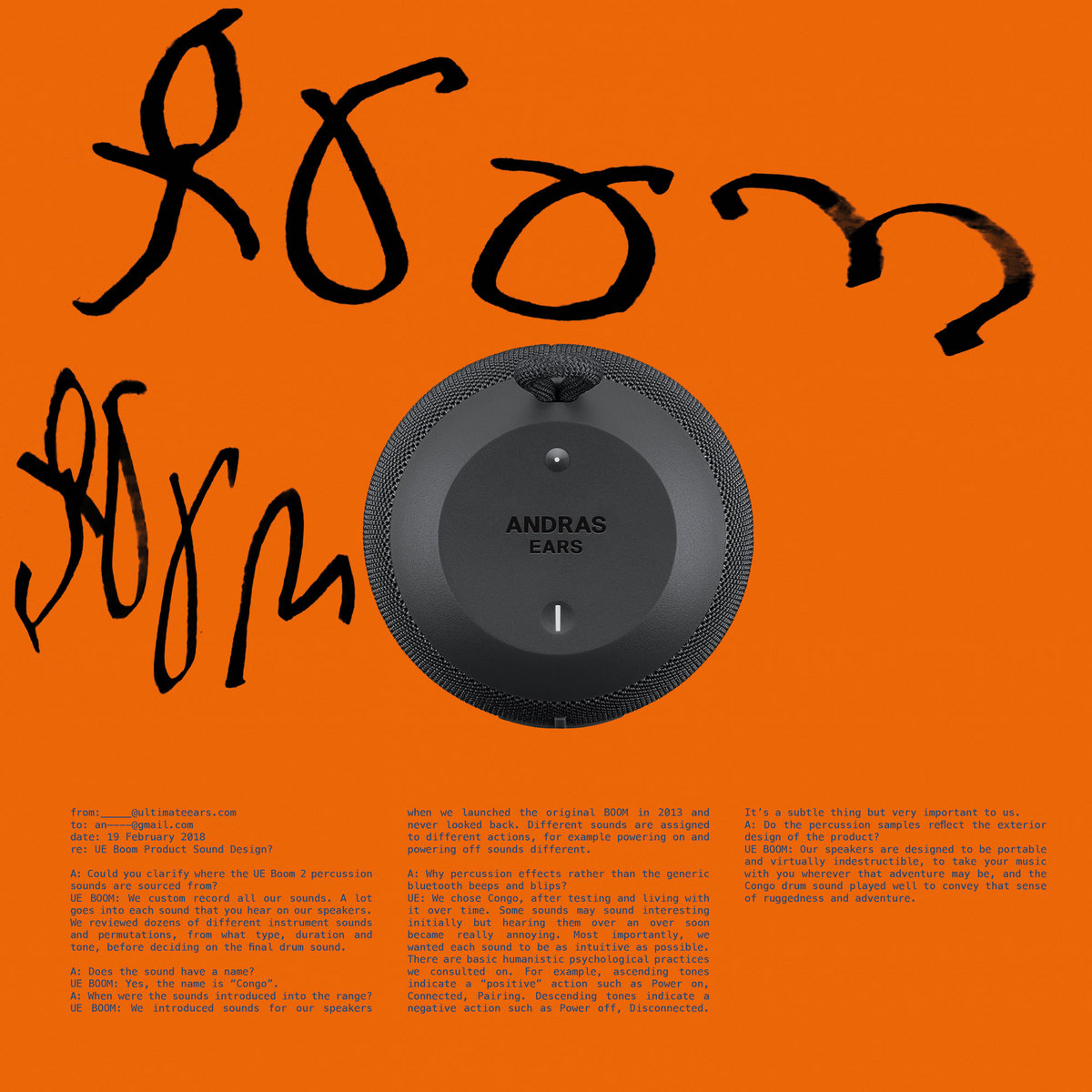 The latest EP is of a faster pace to your previous club or ‘danceable’ material – was this intentional?

In high school science class I wrote an assignment on heart-rates and their relationship to music tempo. My hypothesis (one that is perpetuated in the Hollywood film WE ARE YOUR FRIENDS was that heart-rate would be sympathetically linked to the tempo of music played to a resting participant. This instinct was disproven by my experiments on family and friends, which demonstrated that tempo alone had very little impact on resting heart-rate. I never really took tempo very seriously after that experiment, and make choices based on personal preference rather than defaulting to 120-128bpm. If you need that, there’s always WIDE (+/-%100) mode.

It lands around a similar time as a new collaboration for Noise In My Head Efficient Space, do the projects share any distinct similarities or perspectives?

Besides being weatherproof, both releases were produced in distinction from each-other.

Describe a personal experience or moment within culture which helped shape your train of thought?

I kept running into people with portable speakers in nature. People mountain biking, on the beach, canoeing were bringing sound with them, actively attempting to re-create their lounge-room in the outdoors. Around this time I re-watched FITZCARRALDO, a film where a would-be rubber baron is determined to transport a steamship over a steep hill in order to access a rich rubber territory in the Amazon Basin. A lover of opera and a great fan of the Italian tenor Enrico Caruso, he dreams of building an opera house in the jungle.

Both the UE Boom and Klaus Kinsky’s character shared a similar goal: to bring ‘civilised’ sound to the ‘primitive’ sonic environment of the jungle. In a key scene, Klaus Kinsky stands atop the roof of his ship blasting the voice of the tenor Enrico Caruso into the rainforest in an attempt to drown out the drumming and singing of the unseen ’natives’ that surround his ship. This moment crystallised this thought that bringing sound into nature via the portable speaker was an extension of a much older form of acoustic colonial control, and one I wanted to interrogate. 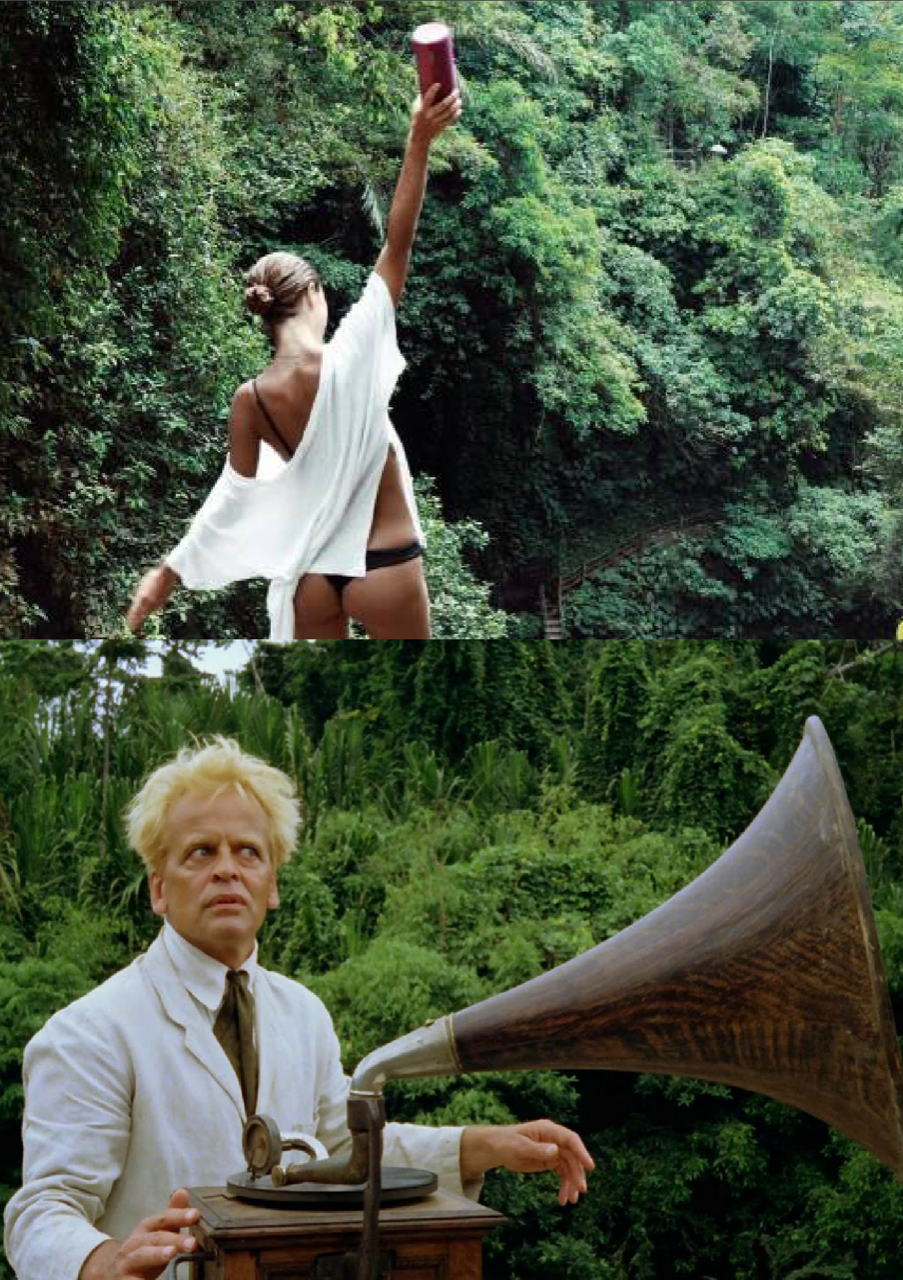 Should we give trance a chance?

Soundtracking and ambience is important in your musical aesthetic – what do you look to for inspiration in this field?

The biggest inspiration was the UE Boom. It plays louder than the original Boom, sounds better and offers tap control. The speaker is stain-resistant, shock-resistant and fully waterproof.

“BOOM 2 was designed to live. To see the world. To get wet, muddy, covered in snow and beat up – but to always be awesome. Totally immersive 360° sound that instigates spontaneous adventures anytime, anyplace.”