Meditating on a moment: John Loveless in conversation with Discovery Zone
Minute Read

Meditating on a moment: John Loveless in conversation with Discovery Zone “What we’re talking about now, is now. How long is now?”

This is just one of the questions posed by JJ Weihl on her superb solo debut album as Discovery Zone. A founding member of Fenster, now an underground indie-rock institution, Weihl’s solo strike-out is glorious, thought-provoking DIY electronic pop music concerning technology, identity and the promise and perils of futurism. More importantly, it’s loaded with opportunities to dance and well, good old-fashioned feeling.

So good was the lead single from the album, ‘Dance II’ (already one of the songs of 2020 according to US independent radio gods, NPR), that Berlin based DJ and writer John Loveless asked to extend it into a more floor-ready hit primed for this summer’s imaginary dancefloors. Teaming up with understated production genius and Peach Discs boss Gramrcy, the pair’s glorious reinterpretation, an NYC disco stomper in debt to the likes of Shep Pettibone and Francois K, now re-emerges as a single in it’s own right on Loveless’ own imprint, Hot Concept.

On this occasion, we asked John Loveless to take the magic key from the record’s cover and pick the labyrinthian, passionate brain of Weihl, reflecting generously on AI, empathy and the power of meditating on a moment.

Discovery Zone was released in June via Mansion and Millions, and the Gramrcy & Loveless mixes of ‘Dance II’ are out now as a digital single on Hot Concept. 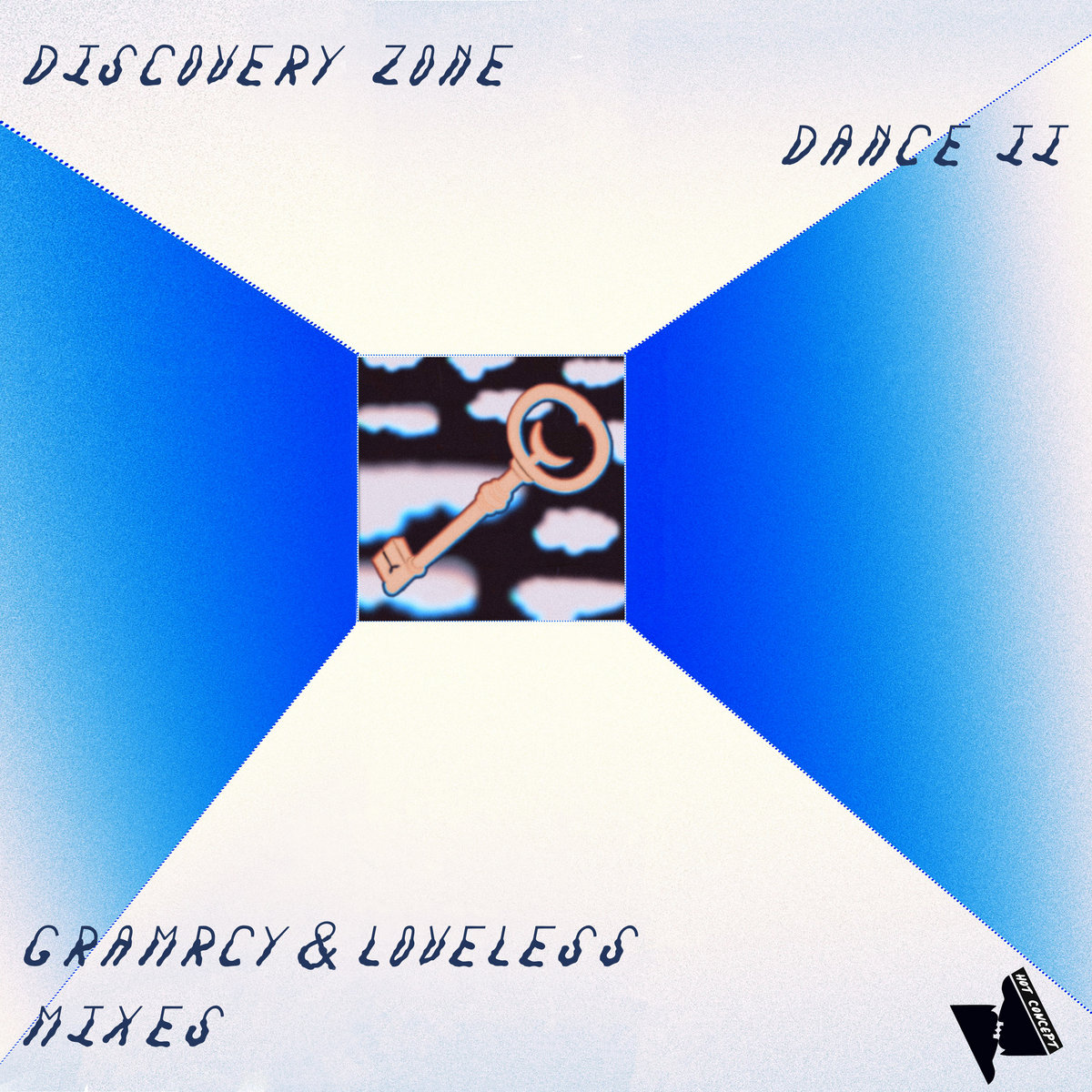 There is a lot of electronic and pop music about communication and technology at the moment, but this feels warmer, brighter and more optimistic than most. Was it your intention to avoid the dystopian feel of a lot of music considering contemporary communication.

Making this record was an exploration of what it means to be a “human” in the current economy of what I like to refer to as the “Machine Dominated Music Industrial Complex” or MDMIC for short. As a human born artist, I’m always trying to use and confuse electronic devices at the same time – but in the end an album is something I make together with machines that grow to feel like friends. I wanted to make something that showcases process and vulnerability as much as ability, to amplify errors. While making this record, I realized that my limitations are my biggest strength. And that’s either the mark of a true optimist, or a true fool ☺

As an entrepreneur, my intention was to create a legally recognized Zone of Discovery which would transcend time and space, available on all digital streaming platforms and also in vinyl form. As for avoiding dystopia well…I tried and failed to find a completely dystopia free zone on my musical GPS. But I think the title of the record attempts none the less to put the finger on the button. In consumer electronics, a device designed for your convenience to control yet another device begs the question – who is now in control? Have we got it or have we just given it all away? And will we be able to tell the difference?

As the PR acknowledges, the record is more meditative than confrontational or political. Do you find it easy to sit with complex ideas, rather than decide on them.

In general I’m definitely more interested in posing questions than generating answers (see answer to previous question which in the end is a series of semi-coherent questions.)

I’m gonna go ahead and ask myself a follow-up question here; what do you think of these lyrics?

“I don’t know you, I just wanted to control you

Ok, well, the lack of subtlety on my part is not lost on myself.

I think being seen as the “product” by uncountable invisible corporations harvesting my/our data on a daily basis at every click point is something that has become so mundane that it’s hardly worth mentioning. But I’m mentioning it here because I’m eating a cookie right now, and that reminds me of all the different kinds of cookies out there, like session cookies, persistent cookies, chocolate chip, peanut butter, Http-only cookies, third-party cookies, the list goes on. To be a consumer of cookies is political. If I choose to accept these cookies, am I actually in control, or do I just have the illusion of choice? In case you were wondering I was just eating a cookie containing dark chocolate and a biscuit like element and it was so good that I will have another.

The thing is, there is a deep fear, for me personally, as a small independent artist, that if I don’t engage in optimizing my algorithm, I’ll cease to exist. Who am I and how will I even keep track without access to my browser history? If I make myself un-googleable, was I ever even google-able at all?

I think it’s appropriate to mention here the term “hypernormalisation” which is a phrase coined by Alexei Yurchak. In his book “Everything Was Forever, Until It Was No More: The Last Soviet Generation” (2006) he talks about the paradox of life in the Soviet Union in the 70s and 80s. He talks about how everyone knew that the system wasn’t working, while at the same time no one could envision or enact an alternative, so basically people just played along to perpetuate this illusion of stability. And the longer this make believe continued, it became a feedback loop of a new kind of reality which he called hypernormalisation. You also might be familiar with the term from the 2016 documentary by Adam Curtis.

Anyway, the point of this tangent is to say…we’re living in a hypernormalised version of ‘reality” that is essentially controlled by a few big corporations and billionaires. Even when we think we are subverting this system, by continuing to engage with the very tools that keep us in the hypernormalised bubble, we fail to find our way out of it.

But to bring it back to the music, the video I made for “Blissful Morning Dream Interpretation Melody” is in fact a commercial I created in the hopes that people would buy my app which is in a beta stage of allowing us to access, download, and share our own dreams. The personal is political. And what’s more personal than our dreams?

I think it’s interesting that you were keen to feature this imaginary conversation on the album with Sophia, arguably the world’s best known AI robot. Your empathy towards her made me wonder how we will consider AI in the future… I wonder if we will perhaps o you think in the future, people will look back on this as fetishisation of AI?

In “Sophia, Again” we are listening to an actual human pretending to be a robot who is trying to understand what it means to be a human, talking to her “creator”.

Nowadays, in the quest to close the gap between ANI and AGI while avoiding the nightmare ASI scenario of gray goo or ecophagy, the development of what we call AI can also be viewed as a big old mirror being held up to who we are and where we’re at as a species.

I think the way in which we create an AI like Sophia shows us our own narrow minds. To take something with the potential to be anything, to go far beyond the human form, and then design it to be in our own image, then fear it taking over us is a really telling narrative about us as a species. We keep creating this thing that we also need to be afraid of it and fight against, but we can’t stop ourselves.

I totally agree that we will look back on early AI like Sophia and think, how cute, we were trying to create something that looked like an independent thinking machine but is in fact just a narrow collection of data sets put inside of a female presenting robot body that we can “relate” to and also fear because of the uncanny valley effect. But generally speaking, I think that what we call AI is much more vast than what we try and make it into. What worries me is something like neuralink, which is an implantable brain-machine interface being developed by Elon Musk. In the context of our current crumbling exploitative capitalist world, the potential uses of this kind of technology is very problematic.

“Forever is an unbroken chain of nouns” – what does this mean m8?

A lot of the sounds on this record are not inherently futurist, in the way that I think an LP of fractured noise or club sonics might be. Do you think in utilisting ‘classic’ sounds (the sort we’ve pushed on the remix), it’s an easier way to deal with complex developments?

I guess it’s mostly a matter of personal taste, and gear. For example, the first track “Nu Moon” consists mostly of this Yamaha rx-11 drum machine I used on a lot of the record and the DX-7 synth but then all the voices are digital VSTs. I like working with drum machine hardware sometimes because you come up with patterns you might not make in midi. It’s a limited set of sounds also. Sometimes I get overwhelmed by infinity and sometimes it turns me on.  Depends on my mood. But in general, I find limitations to be very helpful.

I like to keep my process a bit messy and non-linear – sometimes I write songs on an organ, sometimes on electric guitar, sometimes just in the box. But I try to encourage this kind of messiness in myself and the sonic elements that I’m seeking to capture and frame. I know I talk a lot, but in the end, I just have to feel it, when I’m alone with myself, before sharing it with anyone else. If you don’t feel it, it doesn’t mean anything. So my intention is never – I want it to sound like this song – it’s more like – I find a mood or a feeling or a season and I want to tune it to that frequency.

There are so many unspoken codes and references in the music we hear, and the music we make – from drum samples to the kinds of reverbs you use. A lot of it is intuitive and subconscious, and a lot of it is really nerdy and self-referential. I think the more you learn about production in general, the more important it is try and listen to and understand what you intuitively like, rather than what sounds “correct.” Because any machine can make a song now, and it’s only the beginning of that story. You can quantize or humanize the way an instrument is played, it goes in both directions.

Reality is so unstable, everything is in a constant state of change, but I try and make it stable by doing things like making records. It’s a good exercise. It’s something to do. It’s so… human.