Raf Rundell is best known as one half of ursine dance-pop outfit The 2 Bears alongside Hot Chip's Joe Goddard, but that might be about to change with his debut solo album Stop Lying. Released last month via 1965 Records, it follows the 2016 mini-album The Adventures of Selfie Boy Pt. 1, and finds Raf stepping up his songwriting and experimenting with new ideas. From the sunny Britpop of 'Every Morning' to roller rink hip-hop in 'Sweet Cheeks' and the Fisher-Price disco epic 'Falling Out', the whole album is loaded up to the hilt with warm grooves and even warmer lyrics. I caught up with Raf on the phone to chat parenthood, wrestling and the joy of rediscovering old music.

So my first question was going to be about the album cover.

That's pretty much the view from my front door! I live right by Peckham Rye, on top of the hill.

What kind of brief did you give? It's very striking.

Ben Edge who painted the portrait is an old friend of mine – I actually put a record of his out years ago, he was in a brilliant Oi! punk band called The Spivs. Anyway I've always liked his pictures, they're like a mix of old school portraits and outsider art. Inspired by the Northern Renaissance if you'd like to get that way about it [laughs]

I was thinking Francis Bacon as well.

Well yeah, Bacon was taking from Bruegel and all those boys. Like Holbein's Ambassadors – it's a straight portrait of these two guys but it's also got all these symbolic bits and pieces in the background. Portraits from that era of anyone who fancied themselves a bit – like I do – would have included things about their life, for example a globe because they're well travelled. So on the cover there's someone with a mirror ball head holding someone with a baby's bottle, which is fairly self-explanatory. London's there in the background, and I'm just looking a bit nervous about the whole thing! Ben's a total genius – a Kentish fellow in a punk band who paints pictures, like a modern day Billy Childish. I was really happy to spend the record label's money getting a portrait of myself painted for my wall! 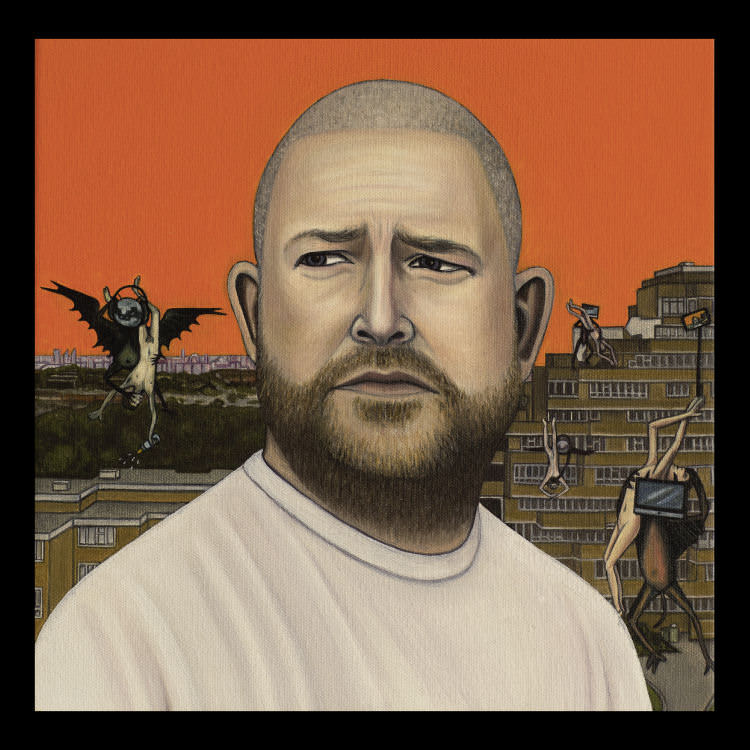 When did you start work on the record?

I mean, some of it was a really long time ago… When I first started doing The 2 Bears, I had no real studio experience. I wrote a lot of the songs for our first record on an acoustic guitar. Over the years I've picked bits and pieces up and been tinkering away, and obviously Joe is super advanced with all that, so I'd just present him with this plinky plonk stuff every now and again. The bits that didn't become 2 Bears stuff nagged away at me and I kept going with them, until 18 months ago I admitted to myself that I was making a record. At that point I still didn't have my own studio but I was working with lots of different people like The Emperor Machine and Riton. I did a lot with a brilliant drummer/producer from the Isle of Wight called Rupert Brown. He's a bit of an unsung hero. DJing every weekend and having young children around has also been part of the whole trip – my little boy's 5 now, so that's why it's all been taking me so long. Slowly but surely I got my shit together and hassled a few of my old friends in order to help me get it finished off.

There's so many different styles, it's very adventurous in that way, it definitely feels like something that was made over a period of time.

Yeah, well that's absolutely true to say. Retrieving bits from hard drives around the place is a very dysfunctional way of making a record! I've really learnt a lot and I won't fuck about so long next time. But I don't know whether that'll result in a better record or not, y'know? I'm not terribly prolific – the music has to bubble away for ages before it comes. Well you know, I did that demo for Ransom Note [all will be revealed soon — Ed.] and it took me another six months after you asked me to finish it off!

So when you're doing music are you quite strict with yourself, or is yours a more open-ended way of working?

The time I get in the studio is too brief really. Even having been working on bits and pieces for a while, there comes a point where you feel a bit embarrassed about the amount of work you've put into something that isn't finished, so you try and get your shit together. The whole thing is so open-ended and personal that, yeah, something I could really do with some help on is finishing shit. But I would say a lot of people are like that. So many hard drives around the world…

I suppose working solo gives you creative control, but you also have to shoulder the burden of making sure stuff gets finished on time.

Yeah, the buck stops at you, of course. It would be nice if we’re heading to a point where machines do all the hard work and we can just hang around expressing ourselves!

How would you say that being a parent has fed into making this record?

Just naturally I guess – the whole rhythm of your life changes when children turn up. Our first son was born at the time when The 2 Bears were having their first run of success, and we were everywhere, making hay while the sun shines. Coming back home to a newborn is quite a lot really. Sometimes it gets a bit kitchen sink but you just have to write about what you know and the situation you’re in at any time. It doesnt ring true unless I do that.

Musically you mentioned you wanted to move away from the house style of The 2 Bears, so where were you at influences-wise?

I didn't really have a plan. It wasn't a conscious thing not to make house music, I'd just got to the stage where I was bored of opening something up and getting started by putting a 4×4 kick down. Being a parent has affected this record in the sense that I've been spending a lot of time at home, and it's nice to listen to music while you're hanging around, but it's a different kind of playlist that's acceptable in this situation – you can't be banging it out! Kraftwerk's Autobahn was always popular, it moves very slowly and everything is signposted all the way along. I just had this reawakening of listening to music indoors, listening to LPs as the background to my life. The previous four years had just been about picking out what I was gonna bang out at the weekend!

It must be nice to venture back into bits of your record collection that you haven't touched in years.

Ah man it's wonderful, I have to congratulate my younger self! I've been travelling a lot over the last few years and could have been delving through records shops, but it was never that close in my mind. After having a bit of time off you just fall back in love with the music and realise how brilliant it all is. You can have too much of a good thing, can't you! My friend James Endeacott and I have been doing a show on Soho Radio called Morning Glory, 10-midday every weekday, so I’ve been digging though my records. I was just in Sounds of the Universe actually, I bought this South African record which sounded absolutely brilliant, Letta Mbulu's In The Music… The Village Never Ends. And the Kendrick Lamar album DAMN. On the radio i’ve been playing old Hendrix records that my dad passed on to me, and if you can pass on a record like DAMN, that’s quite a good one! You worry everything's just gonna get lost on hard drives otherwise.

How have the live shows been going?

We did a load before Christmas, and a 6 Music session recently. The band are great. I've lucked my way into having a brilliant group of people who are bang up for doing it. I think I came from a very spoilt dance music world where if you want anyone to do anything they need paying. I just rang a few people who I knew were good musicians and went, 'How about it?' And they went, 'Yeah, sure.' Luckily there's some money coming in now to pay them for shows, but they're doing it out of love for music. So that's been much easier then I thought it was gonna be.

Last question – obviously one of the tracks is called 'Ric Flair', are you a big wrestling fan?

Not especially, but I always loved Ric Flair just 'cos… well, why wouldn't you? He was the one for me. There's just something about wrestling from that era. It's weirdly romantic, in a demented sort of way.

What would be your entrance music if you got in the ring?

[Laughs] Maybe the music from Curb Your Enthusiasm! I don’t fancy my chances much to be frankly.