Detroit has long since paid it's dues – there's very little that we can say about the great city which has not already been proclaimed. However, what we can do is focus in on two of the most influential forces in music from within city, Waajeed and Rimarkable. Both have played a prevalent role in establishing a singular sound within the scene and have stayed very much true to the place which raised them. Waajeed is perhaps best known for his work as one half of Hip Hop group Platinum Pied Pipers and as an original member of Slum Village, however his longstanding skills as a producer have also featured prominently on the likes of Sound Signature, Fat City and Planet E. Rimarkable is the latest signing to Dirt Tech Records, described as a Detroit heroine she works as a disc jockey, producer, vocalist, drummer and curator. Her knowledge runs deep and her taste superb.

We invited the two from the D to talk shop and city. See below:

What was the first gig that you knew you were a professional DJ?

Wow, that's a great question. I think I may have a different relationship to the connotation of "Professional DJ", than most DJs. In 1997, I got my start DJing, and it was in a professional environment. I got my DJ chops at a Mobile DJ company, where I played corporate events, weddings, bar mitzvahs, and private events. I look back and as corny as those events and environments may seem, they gave me the best introduction to playing for mixed audiences, and really taught me how to read a crowd in any room.

I have to say though, the first gig where I learned the true power of a DJ, was June 25, 2006. I had left Detroit and moved to San Francisco in October 2005. I got a random panicked call from a new DJ friend who missed his flight, and couldn't make it to his gig at the San Francisco Pride Festival. I jumped at the opportunity, and went to the gig. They put me on some side street but, I relished in the moment and the people, and played my heart out. The music and the magic was intoxicating. I was in my zone, and looking for the next track. Something told me to look up. In front of me was this woman so caught up in the spirit, she stripped naked and waved her dress like a flag. I knew I had arrived. 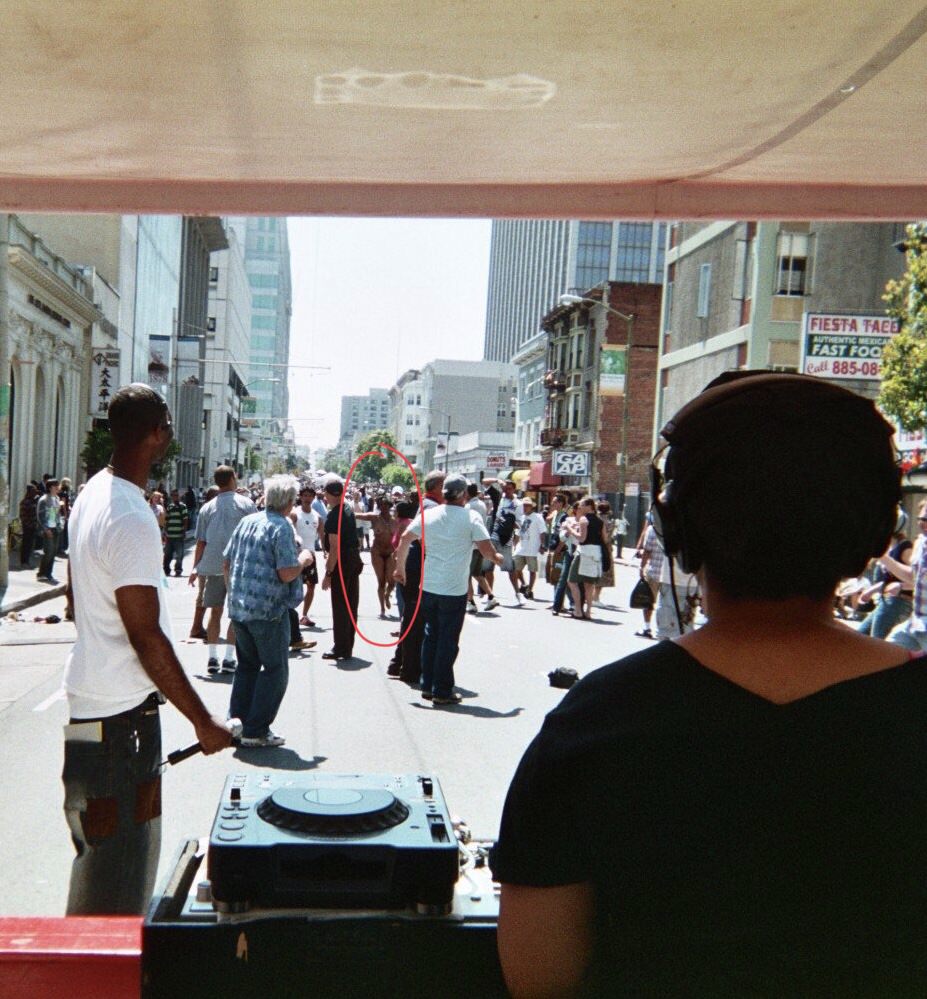 Can you remember the tracks you played…?

Haaaa!! I'll never forget. The track I was playing in that moment was, "Hit and Run" by Loleatta Holloway…and I rode it at 118 BPM.

So how would you describe your own Dj’ing style..?

Nasty. Emotional. Soul. I carry the Detroit narrative of raw, gritty, contextual rhythm with me in most everything I do. It’s a potion. That elixir is like molasses. Anything goes with it because once it’s in there, it can’t escape has no choice but to conform and become one. That makes genres meaningless. That means music is limitless.

It’s a bit of a pointless question these days I guess, but personal preference… Turntables or CDJ’s?

Maaaaan, I hate this conversation. It is so layered, and at this point, whatever works best for that particular DJ.  I personally have felt so much pressure to get the respect of my colleagues by playing vinyl. I have played vinyl. I can do that. I can do anything. I so admire the DJ magicians who do miraculous things with Technics. That shit is dope! I just find the CDJ to be my thing. Now, I don't even need to bring my laptop, let alone crates of vinyl. The old school mentality forgets that the Technic 1200s were also once the latest technology.

Me, I'm a clumsy tech geek. CDJs all day. The way this technology is moving, I prefer not to limit myself. I can obsess about technology, and CDJs just allow so many more options than vinyl playing turntables. BUT, shout out to the technology of the Rane DJ Twelve!! Things may change for me. I just like options.

There's been so many hijackers of the Detroit sound and culture, I can't keep up, or halfway tell the difference. But even as it evolves, true Detroit Techno provides a definite distinction. Detroit Techno FOREVER.

Nothing will make my heart separate from what I love the most but, I also don’t want to take away anything from the Germans and their own legacy in Electronic Music. They definitely have their own influential sound and dance culture. I may not be fully exposed to their story. I need to do some digging. .

Describe how you wrote our collaboration track, "I'm In Trouble"?

I didn't write that song. It wrote itself. It's its own entity. It's a prayer. How do you write a prayer? Your soul does the work. That song is my soul speaking. Every note, every beat, every chord of the song is soul speak. It is sincere. It was freestyle.

I will say, it was the summary of what I had been meditating on at the time. You and I were discussing my career path, and what I wanted for my next steps. I knew something was about to shift in my trajectory, or should I say, level up. New heights can be intense, frightening even. I was praying for support.

What does it mean for you?

It means, prayer works. Honesty works best for me. I bring that in everything I do. When I pray, I’m most honest. I cant escape my own vulnerability. Performing is no different. I am praying when I perform. I’m seeking the highest good…the highest healing, even if that means accessing my pain, hidden parts, or anger. That rawness is important. That’s what’s real and what I trust.

The only thing that gets me going as much as human driven sound vibration, is technology. I love when analog and digital marry. I think there needs more space for celebration when the two meet and make something beautiful. The world loves to compartmentalize when it doesn’t understand something or when it’s too big, it needs to make it smaller. I’ve never accepted that. Not even in my personal life. No boxes. No rules!

Brooklyn has been good to me. I am grateful for how it has given me access to a profound music culture and status, and allowed me to expand my growth as an artist. I have made an impression here. I will always be grateful.

Detroit is my home. My heart is always longing for it. I will always be there in some capacity.

Looking forward now… What do you see?

Prayerfully, an arsenal of musical missiles on Dirt Tech Reck, and a more pronounced global DJ presence. I have a lot of music, and love for this culture left in me. I’m not jaded.

One thing I’ve learned is to stay ready for the next moment. Everything changes moment to moment. I’m staying wide open.

In the studio, do you try different sounds out until something sticks, or do you enter the room inspired?

Both. I never wait to be inspired. I go find it. That normally means slamming the breaks on my busy life, cutting off the phone and listening and connecting with my ancestors. I find myself in the same chair hours later with the funkiest shit playing loudly on the speakers with no real clue how it happened.  Or, I make beat sketches before going to sleep, My brain is on some other shit. 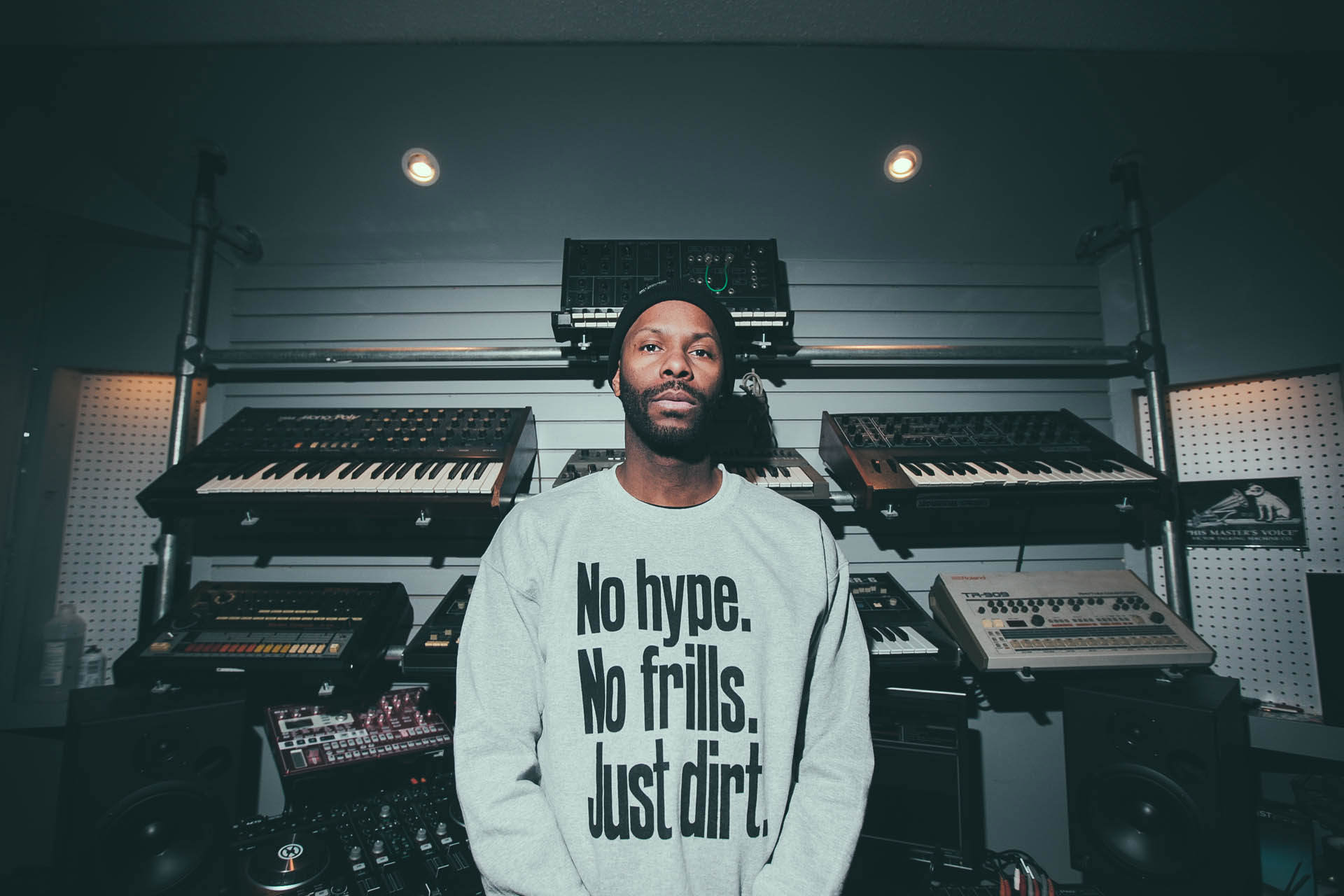 You’ve always made electronic music. Some people are narrow minded. Have you gotten any negative feedback from fans now that your music is 125+BPMs?

Yes! Lots. Some fans miss the “Old Kanye”. LOL. To them I say, “I’m from Detroit. Techno and dance music is my birthright. I’m here to take claim to what is naturally mine. I proud of what I’ve done in the past, but if you continue to talk about the past than you’re now suffers. I’m in my now. Always have been.

Your multiple talents also exist outside of music. Will making music always be a part of your life?

Not sure. I see how at certain point it may not be. All my OGs rarely make music now. They tour extensively or raise the families they’ve neglected from dedicating their lives to this business. Life happens and keeps you from your beloved drum machines. I can’t imagine it now but if it does happens, I’ll welcome it with open arms and finally get some rest at night.

As a native and current citizen of Detroit, with all of the changes happening in the city, and new music making transplants, are you concerned about what that will mean for the term “Detroit Techno”?

Totally! The edge you hear in all Detroit music by people from Detroit is different than the majority coming out of the city at the moment. Authenticity is the cornerstone to anything great! I doubt these’s anything honest from those that use the word Detroit as click bate. If you’re from the burbs own it! Your experiences have value. Be you. That said, there’s always hope for the continuation of raw shit. The have nots will always innovate. Who knows the next genre they are crafting as we speak. It won’t be Techno. It’ll be something else. Something that will embody the reason techno was make in the first place. Rebellion.

Outside of music, are you adamant about maintaining old Detroit culture, or are you flexible with what shifts are potential inevitable?

I embody my city. Im a black man born in America. I HAVE to remain flexible to survive in this TRUMP administration.

Your Planet E release ‘Mother' is fantastic. Will there be one called, “Father”?

Thank you! No. LOL. My mom is a rockstar. She loves it. My dad would hate all the attention.

Your music definitely has the Detroit influence of space/planatary transport. If ever given the chance, would you take a flight into outer space? You know they do that now. Hahahahahah!

NO WAY. I’m a dreamer but there are things that are not for me. I travel thru my music. That’s enough for me in this lifetime. I would like my music to be taken to space in a time capsule. I’d love for aliens to have a dance party to my tracks!

When are you going to take a vacation?

Never. I love this shit!

Rimarkable’s ‘I’m In Trouble’ is out now on Dirt Tech Reck HERE.